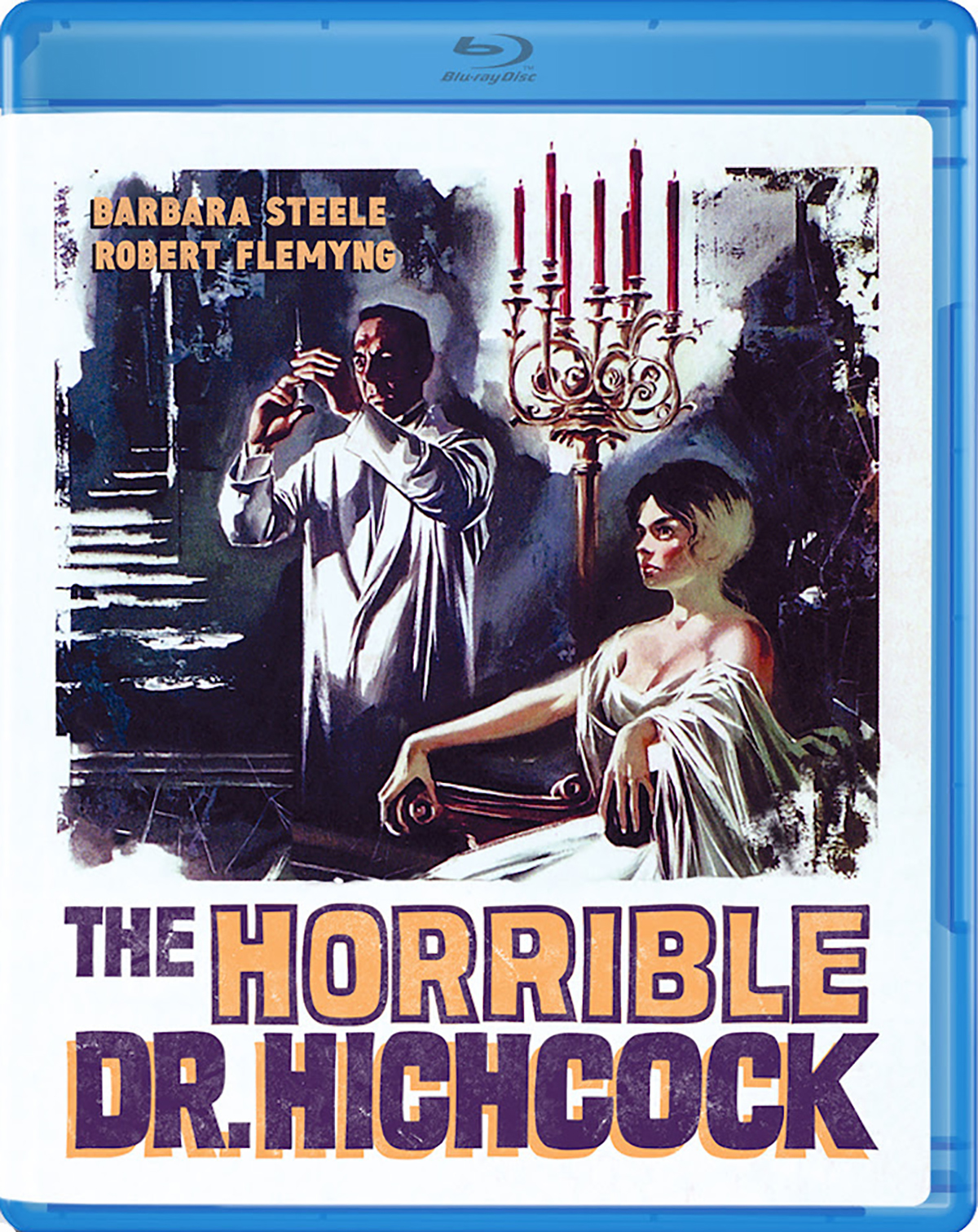 Genre cinema has never suffered from what Harold Bloom likes to call the anxiety of influence. On the contrary, horror filmmakers have taken great delight over the years in pilfering unabashedly from their predecessors. The Horrible Dr. Hichcock is, in many regards, an ideal case in point, though director Riccardo Freda and screenwriter Ernesto Gastaldi take equal pleasure in delivering their nods with a wink. As its very title indicates, the film engages with Alfred Hitchcock’s work in overtly referential manner, but it also explores Hitch’s pet themes and obsessions in profoundly disturbing ways.

The story borrows its architecture from Rebecca: In late Victorian London, renowned surgeon Dr. Bernard Hichcock (Robert Flemyng) brings his new bride, Cynthia (Barbara Steele), to a lugubrious manse dominated by a forbidding housekeeper (Harriet White-Medin) and haunted by his previous wife, Margaret (Maria Teresa Vianello). But the heart of the narrative comes straight out of Vertigo. Dr. Hichcock’s uncontrollable urges are accompanied by washes of deep red that recall Scottie’s moments of monochromatic delirium in the earlier film. Where The Horrible Dr. Hichcock moves into unchartered terrain, however, is in its explicit equation of desire and death.

In Vertigo, Scottie’s amour fou drives Madeleine/Judy to her doom twice (first by proxy, then directly), but his actions are the stuff of Greek tragedy; for Hitchcock, the wages of desire are as deadly as sin. The Horrible Dr. Hichcock goes further: Only by making the object of his desire into a literal object, an inert thing, can Dr. Hichcock fully possess her. His revolutionary anesthetic, so successful on the operating table, leads to disaster when used to lull compliant Margaret into necrophiliac funeral games in the black-draped boudoir. Thus blurring the lines between Hichcock’s roles as dispassionate scientist and impassioned husband is one of the film’s masterstrokes. Like his elixir, the good doctor proves to be somewhat unstable.

Though not graphic by any means, the film’s depiction of necrophilia is certainly lavishly dwelled upon. Hichcock contemplates and caresses his victims, whether narcotized or indeed dead, with lewd abandon, while Roman Vlad’s score goes into suitable hysterics. This frankness immediately marks out The Horrible Dr. Hichcock as fairly extreme for its era. It’s subject matter that few films, even today, have any interest in handling.

Nor are Freda and Gastaldi at all gratuitous: This linkage of sex and death is, if nothing else, eminently Victorian, while the film’s depiction of the male authority figure is subversive enough to fit in comfortably with the emerging 1960s (counter)culture. Incidentally, this U.S. cut of Freda’s film, while several minutes shorter than the Italian version, loses nothing in the way of explicitness. In true surrealist fashion, the jettisoned portions were entirely expositional. If nothing else, the U.S. cut plays even more like a delusional fever dream akin to the hellish vision Cynthia awakens to late in the film.

The Horrible Dr. Hichcock includes other, strictly visual nods to Hitchcock: clusters of umbrellas at a funeral recall a similar shot in Foreign Correspondent; the slow track on a (potentially) poisoned glass of milk is lifted from Suspicion. Freda also works in a self-referential bit or two: The figure of the wizened hag who requires fresh blood to grow young again—and an ominously knotted noose hanging in frame—refer back to his I Vampiri, the first modern Italian horror film, made in conjunction with then-cinematographer Mario Bava.

And the influence isn’t all in one direction. It’s pretty clear that Roger Corman’s The Tomb of Ligeia borrows some imagery and plot points from Freda’s film, just as Steele had earlier turned up in Corman’s The Pit and the Pendulum after making such an impression in Bava’s Black Sunday. Rather than Bloom’s Oedipal anxiety, genre films reveal their true nature as Janus-faced, looking to pluck laurels from the past, while simultaneously seeking to pass the baton along to the next new thing.

Unavailable on home video since the VHS era, The Horrible Dr. Hichcock makes its Blu-ray debut looking about as good as it’s ever likely to, barring a full-scale restoration. There’s intermittent speckling, and some variability in color density and black levels, but overall, colors are vibrant (especially those livid washes of deep crimson) and details of costume and set design are clearly defined. The mono mix has some hiss, and the pitch wavers from time to time, but the post-sync dialogue is intelligible. Roman Vlad’s wonderfully protean score encompasses full orchestral freak-outs, Bernard Herrmann-styled string stings, spooky organ pieces, and the recurrent piano piece that serves as Margaret’s leitmotif.

Not even a trailer.

An essential title for fans of Italian gothic cinema, The Horrible Dr. Hichcock gets a reasonably good-looking, if barebones, Blu-ray release.