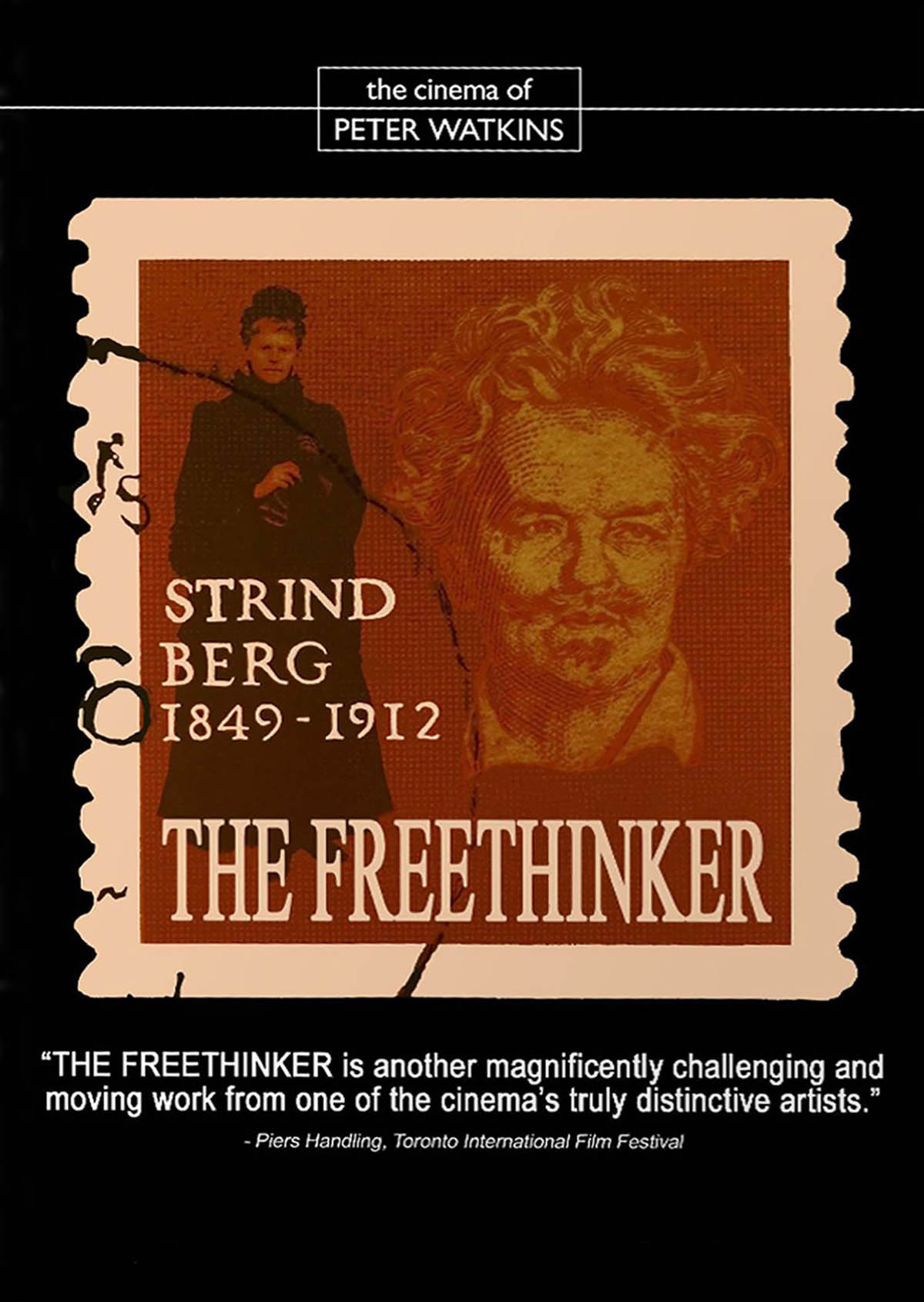 Peter Watkins’s The Freethinker is a biographical film that reenacts scenes from the life and theater of tempestuous playwright, novelist, essayist, and painter August Strindberg, but it’s really all about Watkins and his philosophy in 1994, the year he made this picture. Watkins has always been a critic of mass media and the many ills of modern life, and has created his own form of pseudo-documentary as his weapon of choice against The Man. When dealing with a specific subject, such as nuclear war in his controversial The War Game or government surveillance and suppression of radicals in Punishment Park, he makes connections and provokes thought as clearly and sharply as his literary predecessor, George Orwell.

One would think Strindberg would make a fascinating subject for Watkins, and yet the story behind the making of this movie is, oddly, more compelling than the movie itself. Freethinker was created in collaboration with Swedish high school students, commissioned by the Swedish Film Institute and Swedish television, but the plug got pulled due to lack of funds. Watkins heedlessly pushed on, working with the students on cheap video and spending over two years researching his subject. The students made the costumes, operated the equipment, acted in the project, and filmed themselves having discussions connecting Strindberg’s attack on the status quo with the modern media conglomerations that attempt to stifle artists like Watkins. The film, made as a labor of intellectual and social love, has been largely unseen over the years. Watkins argues that his work is banned, and I wonder how much he, as an artist, feeds off of his own self-fulfilling prophecies; if his work were not banned, where would he get the inspiration for his material, and what would he fight against? Watkins defines himself by the forces he rebels against. Even the title of the film is applicable to the persona of Watkins himself.

It’s frustrating that Watkins’s work has been so maddeningly difficult to track down over the years. Thanks should be given to New Yorker Video for helping to distribute his films, which exist as cultural agitators during a time of mass complacency. That said, it’s too bad Freethinker is so cinematically inert. It looks like what it is: a propaganda film done with crappy video by some bright and idealistic students. The scenes are more like essays, with the camera plunked down documenting young people in discussions about big issues. For the freethinking viewer, this material is food for thought, but it also sometimes feels like you’re stuck in church listening to a minister pounding the podium and insisting that what he says is good, just, and right. Even if it’s good for you, it feels like you’re taking medicine. Watkins has his heart in the right place, but he’s humorless, artless, and doesn’t create a useful allegory here, as he did in the imagined futures of The War Game and Punishment Park. The closest he gets to fusing image and political statement in Freethinker is when Strindberg despairs about having a small room to write in and how he is cursed with the smell of urine from his nearby bucket. What kind of a life can the artist have when he is inhaling piss all day long?

Freethinker jumps around in time and format, ranging from diary entries from Strindberg, his wife, his father, and others in the form of video diaries in which they outline their thoughts and feelings directly into the camera, to specific scenes from his plays that range from attacks on societal ills to raging arguments among families and between relationship-challenged men and women. Watkins is most at home during scenes where students sit around a table debating changes that need to be made in Sweden, from feminism to the morality of art. Title cards not only make reference to where we are in the timeline of Strindberg’s life, but also the present day of the filmmaker’s progress. For example, he makes note that on the day they shot one of Strindberg’s video diaries, the Danish police in Copenhagen opened fire on a crowd of unarmed protestors. Even if much of the project is difficult to digest and even tedious, one also cannot deny it’s the rare piece of cinema that actively tries to grapple with the complexity of modern times and espouse some healthy rage and rebellion against the media machine.

The video image is flat and washed-out, but it is what it is: a supremely intelligent movie made by a high school’s audio-visual club. The sound is good, though, with no audio hiss or inaudible dialogue.

Accompanying the DVD is a 16-page booklet featuring two texts by Peter Watkins, which discuss the history and motivation behind The Freethinker. As always, Watkins is articulate, and viewers are advised to read his essays before diving into the movie.

August Strindberg and Watkins were both supremely abrasive, but were also two of the few artists making a stand against the media barons who control mass thought. This epic-length video essay is alternately a tedious school assignment and an eye-opener.

DVD Review: Hitchcock’s The Lady Vanishes on the Criterion Collection