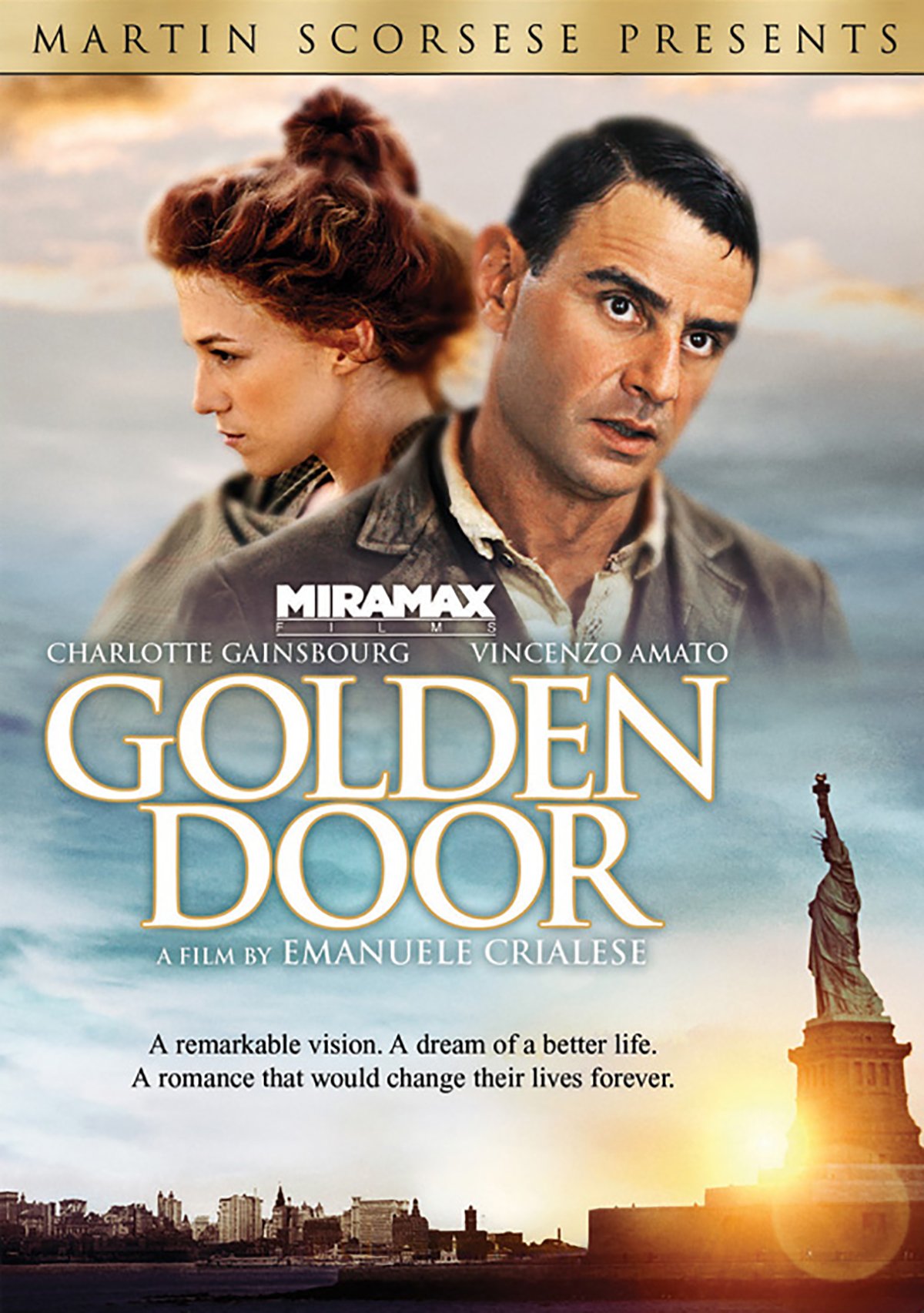 Not one but two Nina Simone songs figure prominently in Emanuele Crialese’s audacious new film, though I hesitate to mention which ones and the context in which they’re used for fear of diluting what is a singularly weird and enthralling cinematic experience. One thing I can say is that Golden Door may confirm Agnès Godard’s stature as our premiere cinematographic artiste; like Emmanuel Lubezki, her talents so boldly and distinctively announce themselves it’s almost tempting to consider her the auteur of the films she helm. A startling experiment in circumscription, Golden Door is always hoarding information from its characters and audience alike—just as a deaf-mute boy sneaks up on two girls (is it to hurt, love, or simply scare them?), the film is evasive about its intentions—though its ambiguities are in service of a great critical perspective.

From the dialect of the film’s characters we can tell that the scene is Italy. The time is less certain, though by the way a man and a boy move across a mountainous terrain—their feet bloody, their clothes eaten by holes, a piece of rock in each of their mouths—this could be some fantasy primeval land that doesn’t even exist. By the time father and son throw their rocks at the altar of some effigy that remains frustratingly off-screen, praying for god-knows-what, you may begin to wonder what exactly is happening here. Meanwhile, a girl announces to an old woman that her friend is possibly possessed (she is, after all, not eating or talking), and after diagnosing her with a snake in her stomach, the woman ties the girl down and pulls out from under her skirt a long, black, wriggly black thing that could be a serpent except it more accurately resembles a prankster’s plastic toy.

Inspired by absurd photographs of American promise (an onion the size of an exercise ball and money literally growing from trees), the superstitious Mancuso family sets off for the new world, at which point Crialese relates their émigré experience as a pageant of audio-visual poetry that flabbergasts the mind. No sight is more awe-inspiring than Godard’s sinister overhead shot of the family’s immigrant ship leaving Italy, the cracking sounds on the soundtrack and fascinating severance of the frame’s two distinct visual planes—one represented by the people aboard the ship, the other by those left outside—suggesting the movement of tectonic plates. These are not the cheap thrills of Titanic but something more artful and humane—a profound consideration of the danger people risk for a chance at a better life.

Crialese employs an unusually expressive technique that is at once poignant and reserved, and though it is tempting to want the film to conform to the magical-realist splendor the great Paolo and Vittorio Taviani apply to their own studies of peasant experience and perseverance, the director’s critical study of the émigré process is no less striking. Hung up on the nature of procedure, the film transpires in very distinct, hellish parts, as if moving slowly along the links of a great and heavy metal chain. The shortest segment relates the primitivism of the Mancuso’s life in Italy, which is suddenly followed by a trip through a deportation station, where men try to exploit their intelligence, a man warns them of the trouble the deaf-mute Pietro (Filippo Pucillo) may give them in America, and they encounter the strange Lucy (Charlotte Gainsbourg), a British woman looking for a man to take her into America.

On board the great ship toward the new world, dialects bounce off each other, Fortunata Mancuso (Aurora Quattrocchi) complains about her physical inconvenience, her son Salvatore (Vincenzo Amato) defends Lucy’s desperate honor, and his son Angelo (Francesco Casisa) haunts the chamber where all the women sleep, respiring their distinct odors. The film then explodes in sensualist tragedy as the ship begins to tumble to and fro in brutal slow-motion, men and women brought together in one room, their bones crashing against the steel walls of their booming prison. The next day, bodies lie in tangles before survivors begin to rise out of an astonishing landscape of mist. Even in horror the film maintains a cool, critical sense of collection, as in the scene of a woman rambling crazed nothings as she hands Lucy the bundle that contains her dead baby. The woman then collapses to the floor and the film, like life, moves on.

In America, the faces of the world converge at a place that is ostensibly Ellis Island, where Crialese unleashes a fierce attack on the process by which the immigrant is indoctrinated into “civilized” society. Moving from room to room like a stealth tiger, the camera observes the way the health and intelligence of the immigrant is intently and disturbingly scrutinized by the cavernous gateway’s workers. The matrimony of women to strange men are brokered in a place that looks like a court room, or an auction house, while Salvatore attempts contact with his family by blowing a whistle into the air and expresses wonderment over the white bread that tastes, to him, like a cloud in the sky. What’s next? No one knows, and the building’s fogged windows reveal absolutely nothing.

In Syndromes of a Century, Apichatpong Weerasethakul establishes an unconventional graphic match between a mysterious object at noon and a building’s strangely shaped piece of machinery, implying a portal in time and consciousness. Throughout Golden Door, Crialese and Godard play with color and shapes to transition between states of unrest and awareness. I won’t ruin the film’s ending and just say that Crialese, like David Lynch before him, understands the unique rapture a certain Nina Simone song inspires and how the lyrics of that song, like the symbolic sea of milk the film’s characters swim through in dreams, speak to the unique camaraderie of the oppressed and the sense of rebirth the promise of opportunity affects.

The sound of wind hitting rock, the wheels of a horse-drawn carriage negotiating the rocky road toward prosperity, a ship’s magnificent horn, bodies slamming into each other across the threatening sea-every sound in the film fills the air and haunts the senses courtesy of the disc’s lush 5.1 surround track. The image is similarly stunning, revering the fine luminescent textures of Agnès Godard’s camerawork, though blacks are inky at times and some instances of edge haloes are visible throughout.

Praise Martin Scorsese, who hasn’t made a film as fine as Golden Door in over a decade. The Oscar-winning auteur provides an evocative introduction, praising the picture’s unique economy of expression and noting how Emanuele Crialese’s artistry and empathy appeals to immigrants and children of immigrants like himself. Crialese headlines a near-30-minute making-of featurette, during which the writer-director reveals the fear and uncertainty with which he struggled to make the film. This is understandable: Few artists dare-and succeed-to evoke the horrors of the real through the ethereal, and Crialese’s unique triumph is his evocation of the trails and tribulations of the immigrant experience as shifting energy.

Thanks to Martin Scorsese’s seal of approval, Emanuele Crialese’s Golden Door may now he salvaged from critical and popular disinterest.