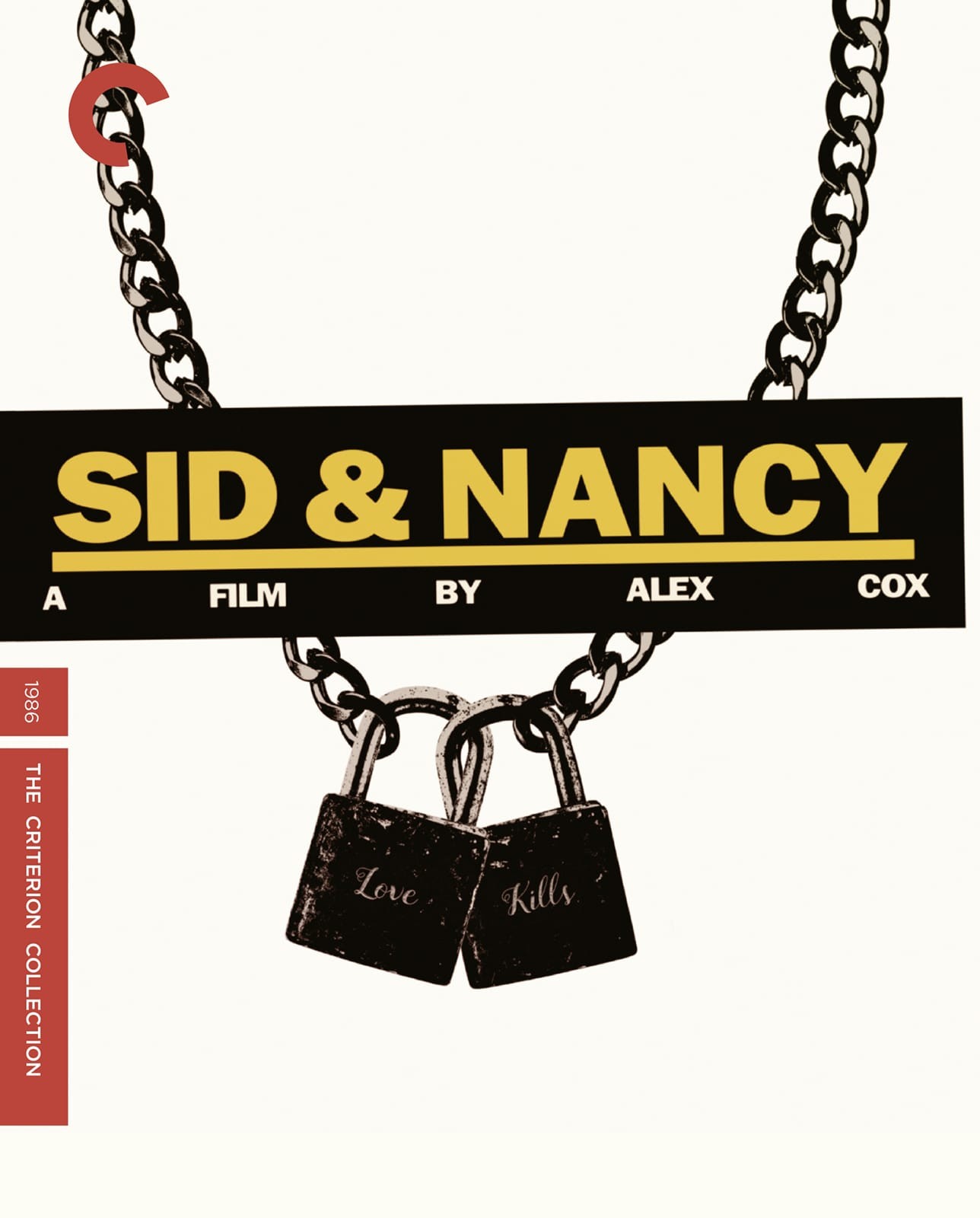 To paraphrase Rudyard Kipling: Punk is punk, and junk is junk, and never the twain shall meet. That’s the object lesson in Sid & Nancy. When it came time for Alex Cox to follow up his punk-fueled cult classic Repo Man, he took the natural next step with Sid & Nancy, a biopic that centers on Sid Vicious’s (Gary Oldman) downward spiral of a relationship with girlfriend Nancy Spungen (Chloe Webb), a wheedling annoyance (dubbed “Nauseating Nancy” by friends and foes alike) who was allegedly stabbed to death by Sid less than a year before he died from an overdose at the age of 21. No future, or so the lyric goes. Sid lived it and died it, while Johnny Rotten got wholesome, and now pitches Country Life butter on British television.

Nowadays, getting inked is a rite of passage every aspiring sorority girl undergoes. Tribal facial tattoos and earlobe stretching are unexceptional sights. In other words, being an outsider seems to be “in” again. Admittedly, parsing a signifying system comprised of hairstyles and torn clothing that assures a cohesive social identity for a bunch of purported anarchists and individualists can get a little tricky. Of course, in the punk ethos, image and idea have always gone hand-in-leather-glove. Watching the ease with which the 1960s counterculture was appropriated and commodified by the mainstream, punk guru Malcolm McLaren must have wondered, “Why wait? Let’s prefab the next revolution ourselves!” Which brings us to McLaren’s own private Frankenstein monster, the Sex Pistols, and their nominal bassist Sid Vicious. (Debate still rages over the extent of his musical skills.)

By refusing to reduce itself to a rehashed Sex Pistols “greatest hits” parade, Sid & Nancy fortuitously sidesteps one of the biggest pitfalls of the musical biopic, examining events instead with an eye for telling detail and a healthy sense of absurdist humor that’s evident in even the bleakest scenes. Cox welds improvisatory looseness and a shabby-chic veracity with flights of fancy and off-the-cuff surrealism, most noticeably in a scene that reconstructs an early music video for Sid’s sloppy, profanity-riddled cover of “My Way.” Sid stumbles and slurs his way down a neon-lit staircase and through part of Sinatra’s tune, before drawing a revolver from his holster and blowing away various swells, decked out in tuxes and formal attire, who make up his audience. His final victim is Nancy, who refuses to play dead, however, and joins him on stage for a backlit kiss, as the shot ends with Griffith-style iris in.

Sid & Nancy, in its first half, offers an immersive plunge into the punk lifestyle, capturing with wit and verve its anti-authoritarian sneer and DIY ethos, before then slowly circling the drain during a dour second half given over to disillusion and dissolution. As a result, while it eludes biopic cliché, the film hits all the requisite beats now familiar in a Doomed Junkie saga, establishing a generic iconography that both Sid & Nancy and its near contemporary, Drugstore Cowboy, did much to insinuate into the pop-culture zeitgeist. Although Cox has suggested that his film was meant to be an unapologetic anti-drug tract, Sid & Nancy, far from just saying no, on the contrary romanticizes its pathetic doomed couple. Witness the iconic scene where Sid and Nancy lean against a dumpster, kissing in silhouette while trash falls in slow motion around them. Sights like this suggest that Cox and company might well have cribbed a title from the writings of famed opium-eater Thomas de Quincey and called their film The Pleasures and Pains of Heroin.

Counterbalancing this doomed romanticism, apart from the couple’s slow slide into dismal squalor and chemical codependence (as if that weren’t enough), there’s a sobering scene in a methadone clinic where Sid and Nancy are taken to task by a nameless social worker (Sy Richardson) who informs them that they’re literally full of shit, wondering aloud why they aren’t peddling some variety of “healthy anarchism” instead. It’s a scene that could easily play like an Afterschool Special. Richardson’s acerbic delivery, allowing his pithy little monologue to seemingly come out of left field, puts it across with humor, which always makes a bitter pill that much easier to swallow.

Sid & Nancy has never looked as remarkable as it does on the Criterion Collection’s new Blu-ray, which ably demonstrates Alex Cox’s intricate use of color and eye for subtle contrasts. Like Criterion’s disc for Repo Man, the transfer gives renewed life to the sci-fi elements of Cox’s aesthetic, most notable in Sid’s profane cover of “My Way,” where the vertically lit stage behind him bears great resemblance to an alien spacecraft. The 5.1 DTS-HD mix is no less startling in its turns of furious aural assault and hushed pillow talk. At long last, Cox’s complex anti-biopic has the image and sound detail to match the specificity of its postmodern politics.

The supplements on this Blu-ray release reinforce Criterion’s dedication to creating the ultimate home-video edition of Sid & Nancy. Two commentaries, one from 1994 featuring co-writer Abbe Wool, actors Gary Oldman and Chloe Webb, cultural historian Greil Marcus, and filmmakers Julien Temple and Lech Kowalski, the other from 2001 featuring director Alex Cox and actor Andrew Schofield, provide helpful contrasts in grasping how Sid Vicious and Nancy Spungen’s short lives held a multitude of resonances depending on who you ask. For Cox, he speaks of their significance with equal parts fascination and skepticism; he’s careful not to romanticize his affections.

The filmmaker reinforces his attempt to dynamize but remain honest to Vicious and Spungen’s lives in an excellent interview recorded in 2016, in which he talks about meeting Wool at UCLA in the late ‘70s, conducting extensive research for the script, and forming a working relationship with musician Joe Strummer. While Cox expresses some reservations about how the film treats its subjects, particularly an ending that the director now finds too sentimental, he remains quite rational in how he discusses the punk scene’s influence on his formation as an artist and political thinker.

Aside from the focus on Cox, there are numerous historical documentaries and making-of featurettes. The best is “England’s Glory,” a half-hour, vérité-style look behind the scenes of Sid & Nancy’s production. Otherwise, the extras look at Vicious and Spungen themselves, most notably in excerpts from Danny Garcia’s recent documentary Sad Vacation, which offers a brief history of the Chelsea Hotel and interviews from the titular couple’s friends and acquaintances. But wade into these waters carefully, as many of the interviewees, such as a record store owner who claims he was invited to Nancy’s apartment to have sex with one of her girlfriends, could well be speaking in terms of wishful remembrance.

The remaining short supplements, like an infamous interview with the Sex Pistols in 1976 and an excerpt from the 1980 documentary D.O.A.: Right of Passage, glimpse the real-life figures sitting on couches and mumbling, whether to themselves or a bemused Bill Grundy. There are also a few other archival bits and pieces, including a 1978 phone interview with Vicious recorded just a day after he awoke from a heroin-induced coma. Without subtitles it’s difficult to discern at least half of what Vicious says. Finally, a booklet contains an essay by author Jon Savage and original press materials compiled by Cox about Vicious, Spungen, and the making of the film.

RuPaul wrote that Sid Vicious “feigned fabulousness” without transcending “the inner demons that would eventually destroy” him, a statement that could serve as the thesis for Alex Cox’s bravura confrontation of fairy tales and drug-addled bodies, all of which Criterion meticulously resurrects on Blu-ray.