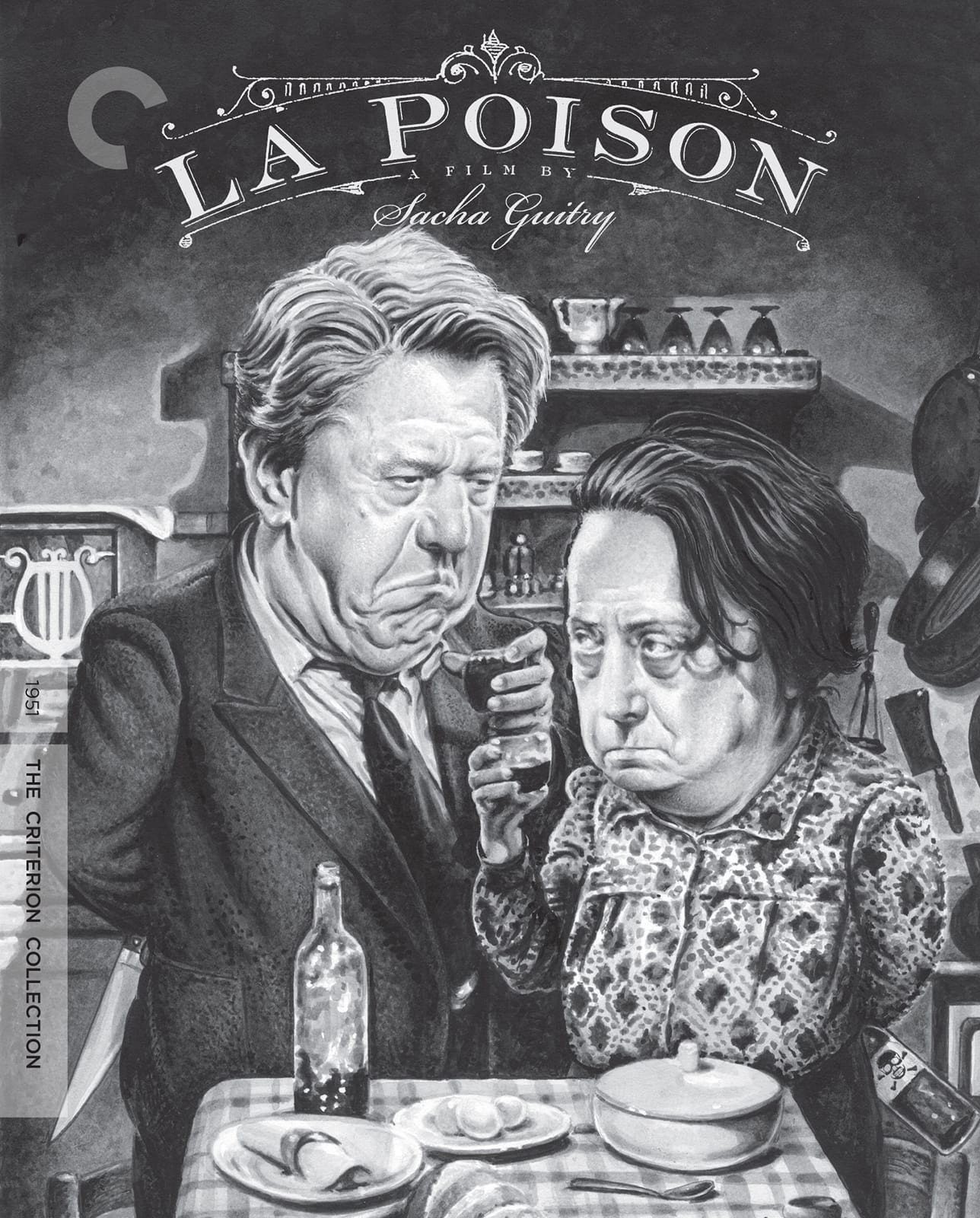 Consistently breaking the fourth wall and drawing attention to the constructedness of cinema, Sacha Guitry’s comedic scenarios march to the beat of their own drum. Whereas the general narrative of classic French cinema (the one criticized as “cinéma de papa” by François Truffaut) revolved around analytical editing and middlebrow adaptations of literature into cinematic form, Guitry’s films broke sharply from these trends. Take his The Story of a Cheat from 1936, which not only uses a “spoken credits” approach rather than on-screen text during its opening, but also has nearly half of the film unfold through a character’s voiceover and often without dialogue between the characters on screen. La Poison is no less unusual. In the prologue to the 1951 film, Guitry strolls the set and chats with the cast about their upcoming parts. Among the actors is the venerable Michel Simon, whose role will subsequently function as a double (albeit a murdering one) for Guitry’s own pessimism regarding France’s potential for unity and due process in the aftermath of both World War II and the restrictive Vichy regime.

However, unlike Jean-Pierre Melville or Giuseppe De Santis, who use the war’s fallout as a point of dramatic contention within films like Le Silence de la Mer and Bitter Rice, Guitry concocts a biting satire of a peasantry desperate to feel some degree of triumph when confronted with indefinite financial destitution. On the heels of something like Vittorio De Sica’s Bicycle Thieves, La Poison’s tale of Braconnier (Simon), who gradually works up the nerve to murder his wife of 30 years, might almost seem callous in its decision to frame the lives of the poor through the scrim of comedy rather than neorealism. But, as Braconnier tells a neighbor when asked what’s ailing him, his problems boil down to one unfortunate fact: His wife is still alive.

Such a blunt assessment of marriage via overt misogyny might be a tiresome punchline were Guitry simply out to affirm the sanctity of civil union by poking fun at his characters. Instead, La Poison funnels them through a practically Dostoyevskian gauntlet of philosophical debate over the license to murder one’s spouse. In turn, the increasing absurdity of the scenario reaches critical mass through a climax in which a court case is intercut with children holding a mock procession of the same events.

These trenchant debates occur in Braconnier’s two sessions with Aubanel (Jean Debucourt), a lawyer and confidant who initially provides counsel to Braconnier, thinking he’s already killed his wife, Blandine (Germaine Reuver). Their discussion concerns how one should proceed after an act of violence in terms of prosecution. Yet, their conversation never raises the matter of ethics or the necessity of determining guilt. In effect, Guitry places Aubanel’s adherence to a dubious code of confidentiality itself on trial. When Braconnier returns a second time, with Aubanel now aware that his premature advice assisted in the actual crime, it’s a perfectly logical, though no less morally absurd conclusion for a system that champions protocol.

Of course, by giving the face of rational violence to Simon, Guitry implores the viewer to contemplate how circumstances in France have changed since, say, 1931, when Simon played a character facing similar circumstances in Jean Renoir’s La Chienne. The outcomes are ostensibly the same here, but the context has dramatically shifted to make the protagonist less of a scoundrel and more of a working-class antihero whose successful navigation of the legal system renders him a figure of reverence—at least in the eyes of the children who greet him following an acquittal. Guitry’s satire digs into the French subconscious in deceptively complex ways, implicitly asking if the very foundations of law and order are themselves poisonous, especially if they can be so easily reduced to farce—both by Braconnier and Guitry himself.

An altogether stellar digital restoration showcases La Poison’s functional black-and-white cinematography, with contrast, depth of field, and focus all calibrated to the appropriate measure. Grain is evident throughout—as are mild defects in the image, which are seemingly due to a less-than-perfect negative. However, none of that distracts from the film itself, and nor does the monaural soundtrack’s occasionally hollow-sounding transfer make dialogue difficult to make out. There’s undoubtedly more work that could’ve been done to make this transfer the final word for home-video viewing of La Poison, including a higher resolution scan, but for now, this is a more than serviceable presentation of one of Guitry’s most brazen accomplishments.

A pair of hour-long documentaries highlight Guitry’s relevance to French cinema and culture, as well as his collaborations with Simon. These in-depth explanations of Guitry’s life and work use a standard assortment of talking heads and clips to contextualize the evolutions in his body of work. An interview with Olivier Assayas is also perceptive, as he explains Guitry’s influence as an artist and storyteller. Assayas states upfront that, while he doesn’t consider himself a cinephile, he’s been long drawn to Guitry’s “unique sense of entertainment,” which to his eye continues to make him one of the most important French filmmakers of all time. From there, Assayas analyzes the tone and form of Guitry’s finest work by explaining why he thinks Guitry’s acting chops are just as impressive as his writing abilities. Finally, the accompanying booklet contains an essay by prominent film scholar Ginette Vincendeau and a tribute to Guitry by François Truffaut.

Criterion presents this comedy of murder and manners with a commendable Blu-ray presentation coupled with a useful trio of supplemental features that will be of interest to novices and connoisseurs of Sacha Guitry alike.