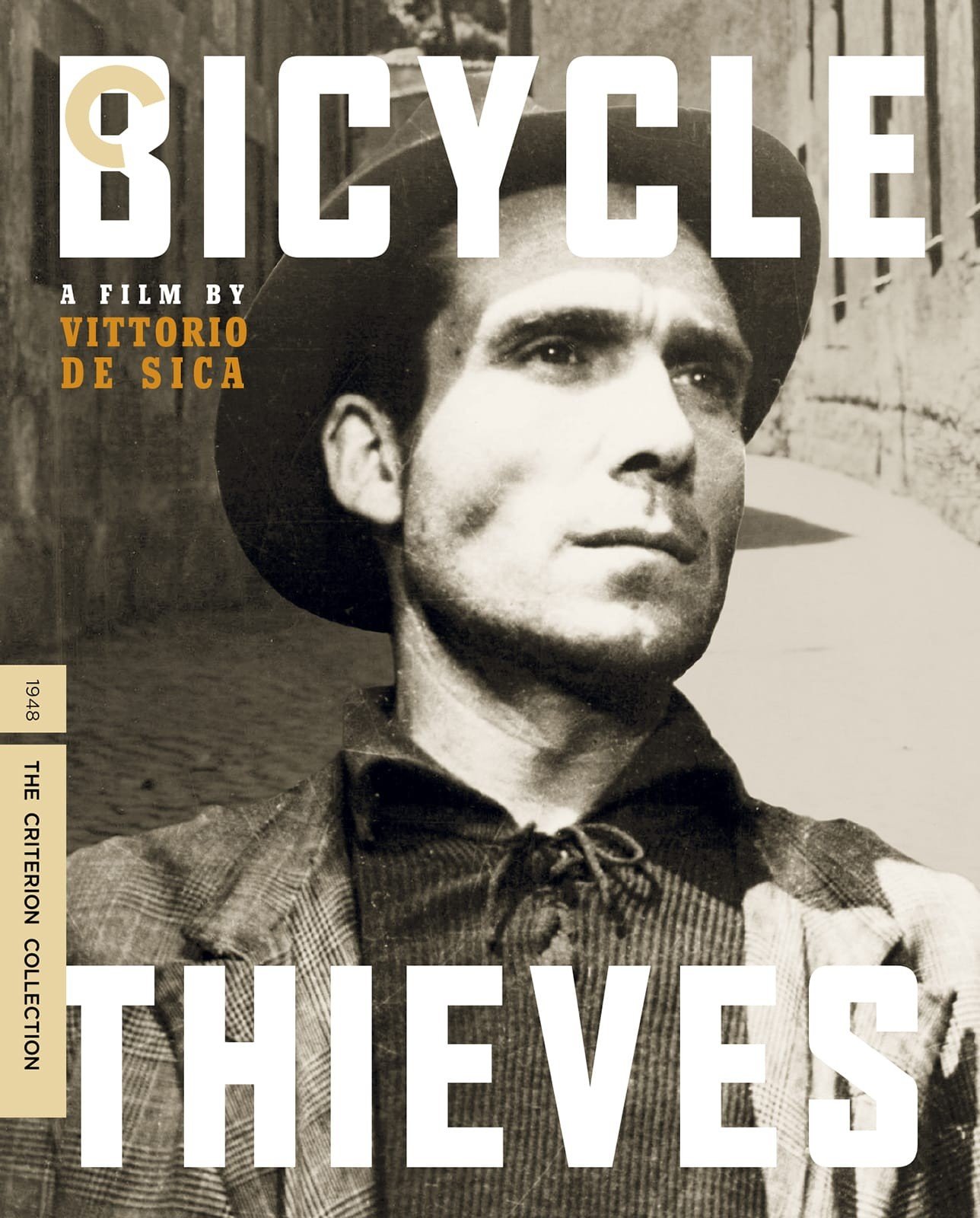 The plurality of the title Bicycle Thieves accounts for the film’s narrative being premised on two thefts of bikes—the first by a young man (Vittorio Antonucci), the second by his victim, Antonio (Lamberto Maggiorani), who concludes the film by attempting a retaliatory gesture, albeit on a random stranger who has no involvement in the original altercation. Yet no one is random and no one is free from the crippling effects of desperation bred from poverty in director Vittorio De Sica’s neorealist milieu. In fact, nearly every character Antonio encounters throughout the film, whether an unnamed employer who threatens to take away his impending job if he doesn’t acquire a bike, or a psychic who preys on the people in the local neighborhood of Rome, can be understood as a thief to some degree.

But Bicycle Thieves isn’t merely about recognizing that a lack of societal infrastructure, whether too few jobs or minimal access to clean housing, leads to a forlorn citizenry, though that point is made here and there. The film is a landmark, and one of the greatest humanist films ever made, because of its unwavering belief that none of these people can be solely blamed for their actions. In a film where human faces are essential to recognizing the emotional toll of a financial loss, whether through visible shame or tears, it seems as if the most important face—whomever’s responsible for these troubles—remains hidden. With shots of tall buildings that tower out of the frame and loom over human figures in the foreground, or a sequence in a depository where thousands of sets of bedding are seen to have been traded in for quick cash, there’s an invisible, abstract entity that looms throughout. Whether that’s God, fascism, or something else, De Sica never makes explicit.

Of course, there are many historical factors that led to the postwar climate and socio-economic destitution of many souls in Italy, though Bicycle Thieves leaves events from that past entirely off screen and turns Antonio’s hunt for a thief into an obsessive, wit’s-end pursuit. The film is imbued with his paranoia and, accordingly, its own remembrance of the theft is predicated on Antonio’s perspective, so that when the thief finally reappears late into the film and finds himself accused of a crime, Antonio has only the thief’s initial, quick appearance to go on in order to determine the man’s guilt. In the end, Antonio’s ultimate decision to become a thief himself may be just as predicated on a questioning of his own sanity as it is his sense of defeat.

More than any other Italian neorealist film, Bicycle Thieves emphasizes social conditions as a dehumanizing process, and De Sica does so by having something as innocuous seeming as a bicycle determine the structure of his mise-en-scène. In an early scene, after Antonio asks a young boy to look after his bike, the pacing anticipates not what’s happening with Antonio and his wife, Maria (Lianella Carell), but the bike’s whereabouts and whether or not it will be gone once Antonio returns. In another scene, Antonio’s son Bruno (Enzo Staiola) can name the make, model, and design of the missing bicycle, which is more spoken specificity than any character receives throughout the entire film. The scene could be viewed literally, as Bruno simply having an affinity for the bike, but it also speaks to a greater sociological problem, where material objects have begun to take precedence over human lives.

At nearly every turn, De Sica asks the viewer to consider the nature of theft and to what extent an individual could become a complicit component of systemic thievery. Ultimately, the thefts referenced in the film’s title prove to be not just a description, but also a confession, since the film’s ultimate thief is De Sica himself, who dangles the prospect of the bicycle’s recovery just beyond Antonio’s grasp, almost to the point of cruelty. That cruelty, however, isn’t sadistic, because Bicycle Thieves recognizes that the only navigable path to enlightenment entails first facing head-on the treacherous realities of the present, no matter how bleak and seemingly without quantifiable assailants.

While Criterion’s 2007 DVD release looks excellent, this new Blu-ray, which boasts a voluminous 4K scan, really displays Vittorio De Sica’s visual prowess in ways previous home-video iterations haven’t. Depth of field is spectacular and reveals the streets and alleyways of Rome with newfound clarity. Close-ups benefit, too, with the film’s famous instances of Antonio and Bruno feeling anguish and shame now more vivid than ever. The only perceptible flaws, given the film’s age, are minor image defects, like small tears and scratches, often at the edges of the frame. The monaural soundtrack is free of pops or cracks and dialogue is clean. There’s also an English-language dub track included, with actors speaking in Italian-inflected English.

The supplements have been imported directly from Criterion’s 2007 DVD, with no new additions. The highlight is a 40-minute talk with film scholar Mark Shiel, who provides a brief, succinct history of neorealist style in Italy during the postwar years and emphasizes that the director’s credited with the movement were in no way united in their pursuits. Much like film noir, Shiel says, neorealism as a concept belongs more to histories of film criticism and theory than to the filmmakers or industry practice. A 55-minute documentary on screenwriter Cesare Zavattini is useful as historical information, but a slog as cinema, as it treks through one talking-head interview after the other, with no attention to pacing or, worse yet, an inventive sense of historicizing such an imperative figure to postwar Italian filmmaking. A collection of interviews with De Sica collaborators lacks exciting revelations about the film’s production, though the value of having these first-hand accounts cannot be diminished. Finally, a booklet contains an essay by Godfrey Cheshire and more input from De Sica collaborators.

An endlessly complex, universal testament to the ills of valuing commerce over compassion, Bicycle Thieves finally arrives on Blu-ray boasting an outstanding transfer from the Criterion Collection.

Review: Les Blank’s A Poem Is a Naked Person on Criterion Blu-ray