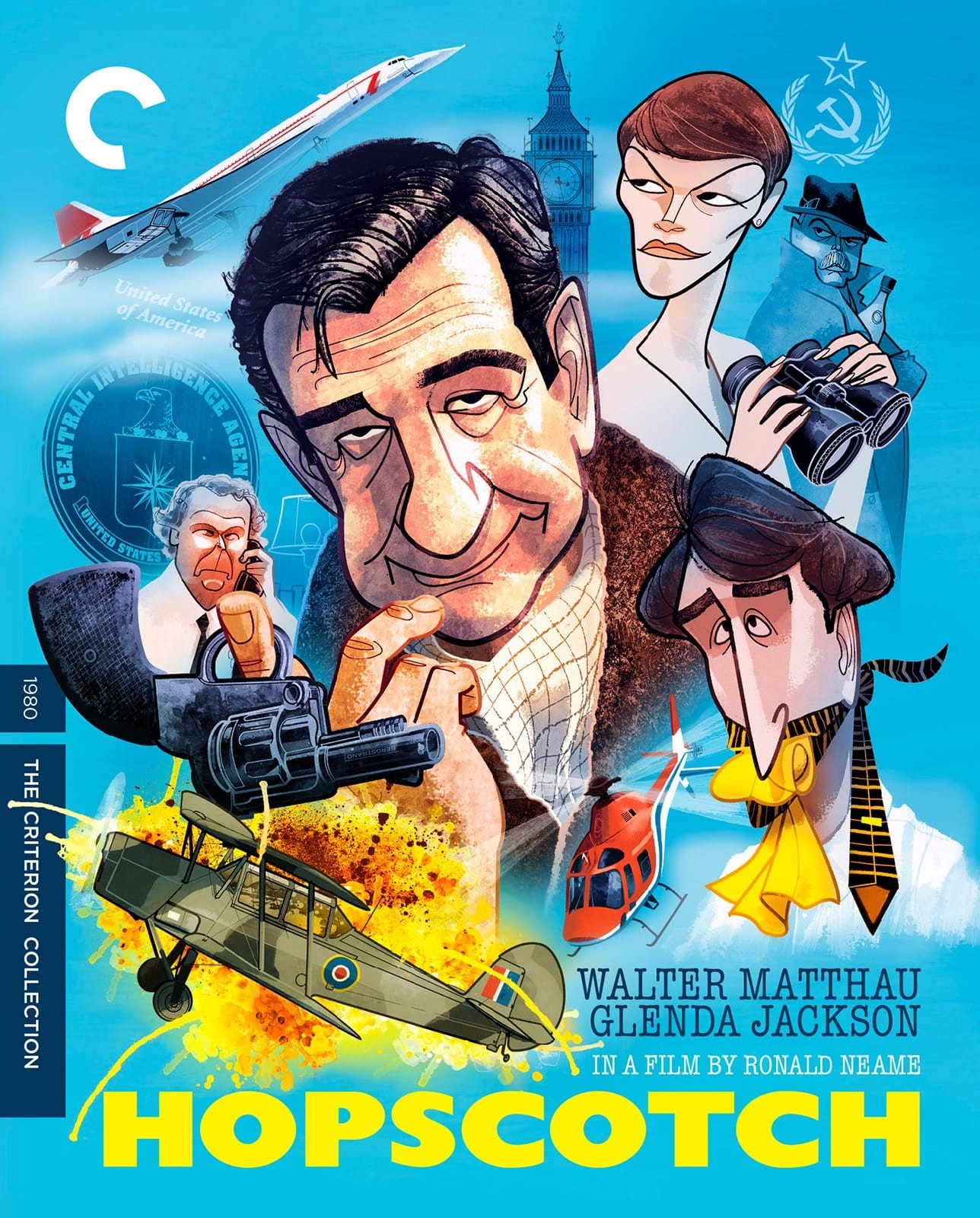 As Miles Kendig, the rogue C.I.A. agent at the center of Hopscotch, Walter Matthau offers a portrait of insouciance that’s as unconventionally sexy as Humphrey Bogart’s Philip Marlowe. Both performances revel in the freedom of getting older and not giving a damn, the sexiness springing from each man’s witty and bone-dry confidence in his respective weathered skin. Kendig also suggests George Smiley, John Le Carré’s anonymous everyman spy, if he’d developed Oscar Madison’s rumpled sass. Dressed like an unassuming economics professor and often slurping beers and eating deli sandwiches, Kendig hopscotches all over America and Europe, threatening to reveal the ugly scope of global spy games to the population at large.

Ronald Neame’s film pivots on Kendig’s association with a member of Russian intelligence, Yaskov (Herbert Lom), during the Cold War. After stinging a group of Russian spies at Oktoberfest, Kendig corners his frenemy and says that he could chase Yaskov all over Munich but, at their age, they’d resemble Laurel and Hardy, so why bother with ceremonial incivility? Yaskov hands Kendig stolen intelligence without a fight and the men depart cordially.

Missing the point of his agent’s quid pro quo, Kendig’s boss, Myerson (Ned Beatty), tries to chain Kendig to a desk after he allows Yaskov to leave Munich. A Nixon toady who’s said to have ascended the ranks of the C.I.A. with tapes of influential people, Myerson resents Kendig’s brand of backscratching, correctly regarding his subordinate’s actions as rejections of his own authority, though his suspicion of Kendig also reveals his own cluelessness. Meyerson doesn’t appear to understand that certain rivals in international intrigue are essentially collaborators—a theme which also runs through Le Carré’s writing.

Kendig’s subsequent revenge on Myerson offers a kind of symbolic reprisal against the puppets of Watergate. Myerson, whose Republicanism is pointedly and facetiously mentioned more than once in the film, is nevertheless a proponent of big government, at the very least in terms of big-government surveillance. And Kendig’s writing of his own personal memoir, exposing the C.I.A.’s questionable tactics, is an act of fighting fire with fire by surveying surveillance. The film parodies political hypocrisy while embracing the conservative myth of a man as a singular fount of his own destiny. In differing circumstances, Kendig’s lone-wolf ways would render him an ideal Republican avatar. The delicious joke of Hopscotch is that the Republican idea of self-reliance has come to bite the party in its collective ass.

Neame and screenwriters Bryan Forbes and Brian Garfield often hilariously fetishize Myerson’s impotency, never feigning a pretense that Myerson can win his war with Kendig. The pleasure of watching a hero unquestionably kick a rival’s ass is generally underrated by cinema, though Steven Soderbergh evinced a bit of Hopscotch’s antiauthoritarian attitude when he shot the Ocean’s trilogy, and the film’s caustic moral relativism may have also rubbed off on the Coen brothers, who borrowed the C.I.A. memoir conceit for their uproariously decadent Burn After Reading.

Hopscotch’s less about specific punchlines than a cumulative attitude of sarcastic disenchantment as masterfully channeled by Matthau and weathered by Beatty. At one of the film’s high points, Kendig hides from Myerson in one of Myerson’s own homes, which he rents from a real estate agent so as to work on his memoir, placing a photo of his former boss in front of a typewriter. (The photo suggests that Myerson’s pinned against an unseen wall, which he figuratively is.) Later, Kendig manages to manipulate the F.B.I. into blowing this vacation home to pieces, which suggests a realization of un-channeled resentment between the F.B.I. and the C.I.A., who’re at odds over the fluid notions of “national security” that arose during Watergate.

But it’s the film’s small, spontaneous touches that are most gratifying. Neame and Matthau render an iconic image out of the sight of Kendig hunched in a chair hunting and pecking at his memoir on a typewriter, listening to the music of Mozart (which provides tongue-in-cheek commentary throughout). Like Marlow’s, Kendig’s smugness is likeable because it isn’t larded with self-justification, which is one of many differences in sensibility that separates him from Meyerson. In a classic performance, Matthau turns selfishness into a supreme fashion statement. Kendig’s beef with the major global super-powers is simple: They don’t have the cojones to own their avarice, and they dared to cut him from the game before he was good and well ready.

Per the liner notes, this digital transfer was created in 2K resolution from a 35mm internegative. Various blemishes have been removed from the image, though there’s still plenty of grain, sometimes to a distracting degree—particularly in scenes with a lot of white coloration. Facial textures are highly pronounced, though background details are soft. The colors are the highlights of this image, abounding in warmth and intensity, helping to inform the overall presentation with shaggy vitality. As with a number of older films that revel in a certain lack of polish, one suspects that a conventionally pristine restoration of Hopscotch might risk missing the aesthetic point or even betraying its roots. That said, this transfer could be more attractive and boast greater visual subtlety. The soundtrack features crisp, deep renderings of the many Mozart selections that are heard throughout the film, and action sound effects have a strong sense of bass. The dialogue is a little murky here and there, but that’s almost nitpicking. Although this is a decent restoration all around, it’s not worth the double-dip if you bought Criterion’s 2002 edition.

Interviews with director Ronald Neame and novelist and co-screenwriter Brian Garfield provide an affectionate and entertaining snapshot of the film’s making. Garfield, who helped to adapt his own novel, reflects on his disappointment with previous film treatments of his work and the joy he experienced during this collaboration. Neame discusses turning Hopscotch down several times, and describes an amusing misunderstanding with Walter Matthau that led to their pairing. Other anecdotes are shared, including Matthau’s reluctance to shoot in Germany because of his Jewish heritage. There’s also 20 minutes of footage from an interview between Matthau and Dick Cavett on The Dick Cavett Show in 1980 that illustrates each man’s prodigious showmanship, in which Matthau recounts with absurdist panache a variety of early jobs in the Yiddish theater. Rounding out this fun but slight package is an alternate “clean” soundtrack that was used for television broadcasts, a teaser and trailer, and an excellent essay by critic Glenn Kenny that emphasizes the film’s wide range of delights.

Hopefully, a re-issue of Ronald Neame’s greatly underrated Hopscotch will introduce the film to younger cinephiles in training, but this somewhat slight and rough edition doesn’t warrant a double-dip for those already in the know.

Review: Nicholas Ray’s They Live by Night on Criterion Blu-ray