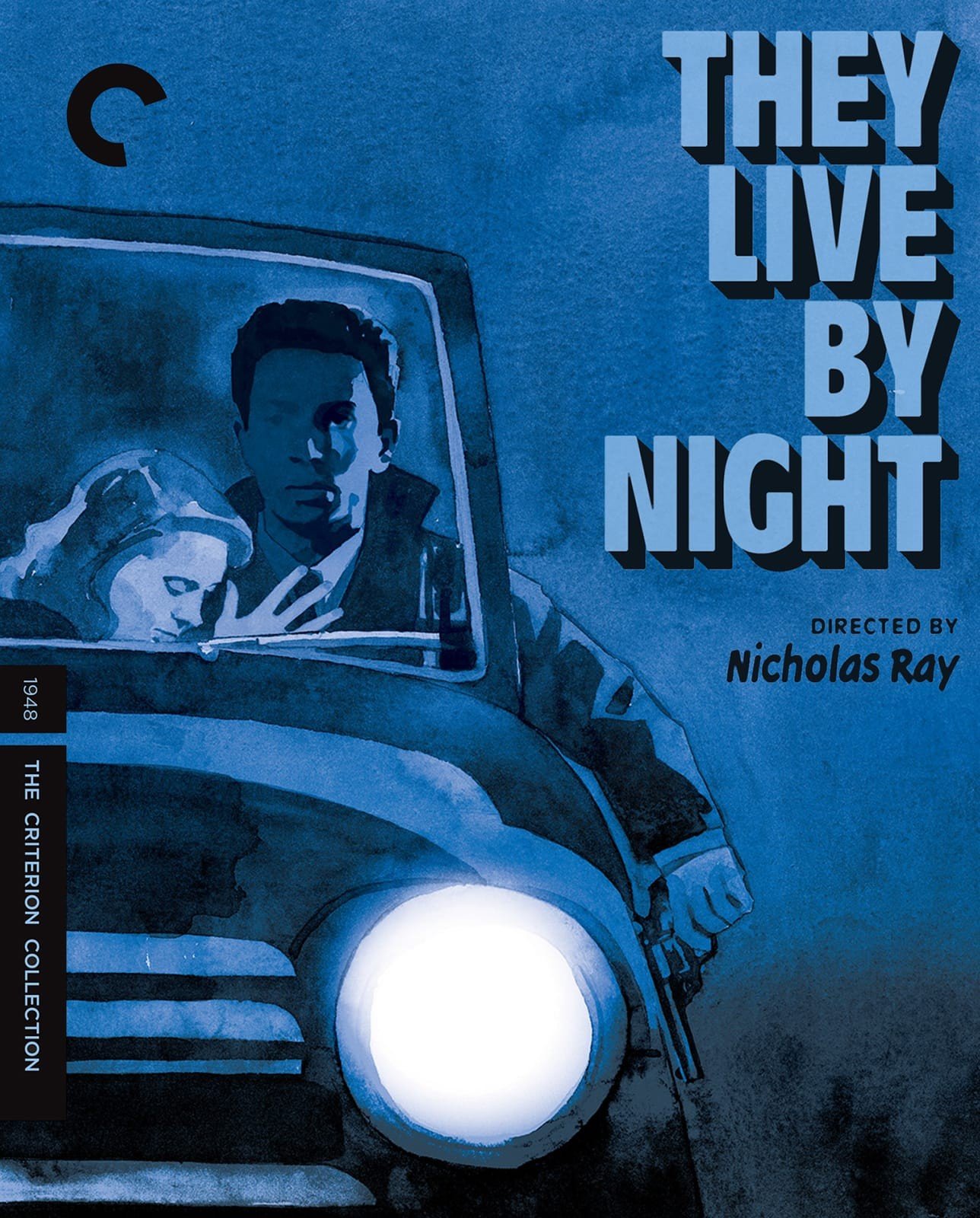 Nicholas Ray’s film career begins with a passionate fire-lit make-out session staged in intimate two-shot, with Bowie (Farley Granger) and Keechie (Cathy O’Donnell) enjoying a level of bliss that auteurists will recognize as a fleeting rarity for protagonists in the director’s body of work. Overlaid atop their nuzzling is a series of title cards: “This boy…and this girl…were never properly introduced to the world we live in…To tell their story…” Upon this ellipsis, the lovers suddenly snap upward as if startled by something off screen, at which point Ray stamps the title of They Live by Night onto the frame and dissolves to the opening image of the film proper—a helicopter-aided tracking shot of a getaway car furiously racing down a dirt road. The peculiar implication is that the heroes have been shaken from their reverie by the rude arrival of the film itself—that their moment of joy transpired outside the story, not in any diegetic reality. Fittingly, as the narrative progresses, it becomes apparent that they’ll in fact never reach this sort of happiness again.

Bowie and Keechie are outcasts joined by rotten circumstances: He’s an assistant to a gang of robbers and she’s the daughter of a gas station owner in a lonely corner of rural Texas. Granger and O’Donnell possess the understated singularity of a Robert Bresson player, with the former sharing the gawky physicality and tight curly hair of Diary of a Country Priest’s Claude Laydu and the latter recalling the earthiness of Au Hasard Balthasar’s Anne Wiazemsky. François Truffaut called They Live by Night “the most Bressonian of American films,” and while his characterization was overzealous, there’s more than just these performer resemblances to link the two directorial sensibilities. Like many Bresson films, Ray’s debut is a genre movie featuring only the bare minimum of generic trappings, one that favors the quiet dramas of decision-making and one-on-one commiseration to the louder spectacles that occur, often unseen, to push the plot along. It’s also a story about a pursuit of grace cut short by the callousness of society, which is manifested most plainly in a number of scenes detailing monetary transactions.

The most soul-crushing of these transactions occurs when Bowie and Keechie, in a rush of youthful abandon, decide to do business at a roadside chapel advertising “Marriages Performed” via a tacky neon sign. A pair of scene-setting tracking shots summons a funereal rather than nuptial tone: first a creeping lateral move charting the tremulous path of the couple from the street (where they’re framed behind the garish glow of the sign) to the sidewalk, and then another that follows them from slightly overhead as they progress through shadows to the front door. Inside is a bug-eyed conman (Ian Wolfe) whose façade of phony benevolence dips into transparent shiftiness when Bowie and Keechie hesitate to write their names, but his calculating business pitches remain on point. In an awkward sequence of vows featuring comically half-hearted witnesses (a gag that would be more at home in a Frank Capra film), lofty ideals of matrimonial union are summarily deadened via a $20 price tag and an irksome game of honeymoon-haggling.

On account of Bowie’s criminal past, the couple never has a chance to savor their new union either. The film’s ensuing hour, structured as a kind of downer version of It Happened One Night, consists of progressively unexciting road trips through anonymous southern landscapes and stops along the way at wooded cabins and budget motels. But the dismal conditions surrounding Bowie and Keechie’s affair, while exposing the flaws in the institution of marriage, never impede the prospect of love, and Ray dedicates much screen time to episodes of whispery tenderness at the expense of any titillating criminal subplots. Indeed, often the only reminders of the parties trailing our hero are oblique in nature, as in the scene when the rumble of a passing train outside gets mistaken by Bowie as the sound of encroaching authorities.

Paranoia briefly sets in, but Ray takes an unexpected route by inching his camera closer and closer to his characters’ faces as their affections strengthen in the face of sure disaster. (They Live By Night isn’t a traditional, moralistic film noir that fixates on the deterioration of a romance as a result of criminal associations.) The ostensible conflict dissipates to reveal the existential condition underneath: Sustained happiness is an impossibility in a world determined to commodify everyone and everything.

They Live by Night, with its gleaming use of top-down hard light and embrace of background shadow, looks positively jaw-dropping in this new transfer. In the early sequence showing the negotiation between Bowie’s gang and Keechie’s father, the wrinkled faces of the crooks jump off the screen with newfound tactility; unless you’ve seen a print of this film, you’ve probably never been able to notice the creepy milk-white detail of Chickamaw’s eye piece until now. Sound quality is almost as pristine. Marie Bryant’s performance of “Your Red Wagon” during Bowie and Keechie’s nightclub date exudes the warmth and clarity of the sound off a freshly pressed vinyl, while the whispers shared between the lovers—increasingly quiet as the world closes in on them—never get lost in the mix.

For this release, Criterion digs up striking archival pieces, like an audio interview with producer John Houseman, and wrangles together the right crowd—noir historian Eddie Muller, Nicholas Ray enthusiast Imogen Sara Smith—for the new analytical pieces. Too often across these segments, however, vague pronouncements are made about Ray’s revolutionary directorial decision-making without sufficient explication of what in particular was so unique about his work, a problem especially evident in the dated featurette that rounds up pithy worship from Oliver Stone and Molly Haskell, among others. The highlight of the disc is the commentary by Muller and star Farley Granger, which suffers less from this fawning by virtue of its wealth of firsthand anecdotal and historical detail. Film scholar Bernard Eisenschitz contributes the oddly structured liner notes, which read more like a handful of disconnected musings than a considered essay.

Simultaneously tough-minded and delicate, the film is an exquisite stage-setter for Nicholas Ray’s career that has never looked better on home video.