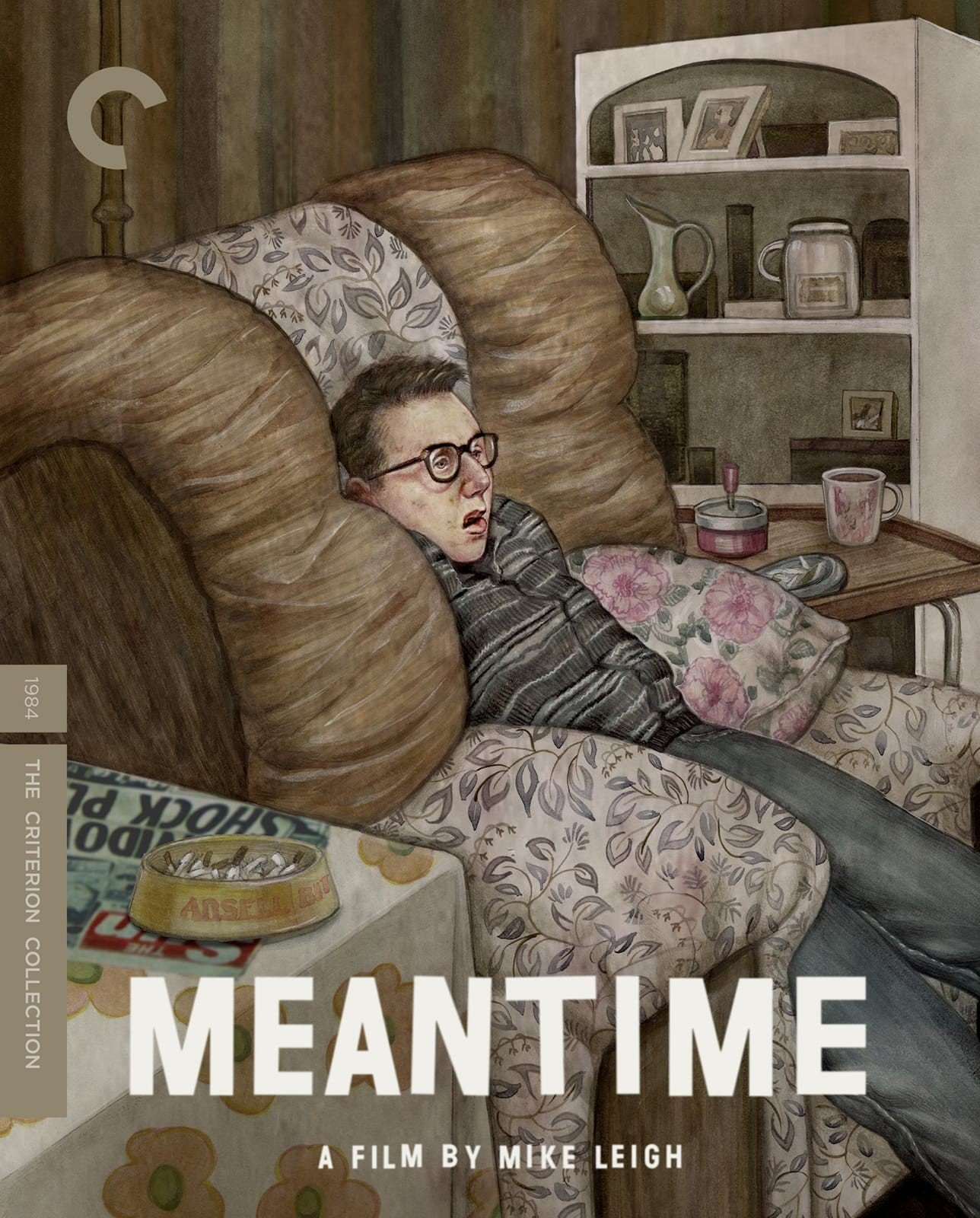 Broadcast on British television in 1983, Meantime already finds Mike Leigh in full command of his brand of working-class tragicomedy. The film follows the downtrodden Pollock family, who live in a flat in London’s East End. Of the household, only Mavis (Pam Ferris) works, while her husband, Frank (Jeff Robert), and their two grown sons, Mark (Phil Daniels) and Colin (Tim Roth), live on the dole and stew in their boredom and bitterness. Intensifying the Pollocks’ resentment is an infuriating contrast: Mavis’s sister, Barbara (Marion Bailey), lives with her husband, John (Alfred Molina), in the comparatively posh suburbs. College educated, Barbara speaks with a soft sense of classist euphemism that’s far removed from Mavis’s guttural speech. It’s hard to believe the two women are from the same planet, let alone family.

Meantime is composed of a series of episodes in the Pollock family’s life, centering mainly on Mark and Colin, who’re defined by a broad contrast that illustrates Leigh’s gift for a kind of bone-deep caricature. Mark’s intelligent, using his perception to harass everyone in his periphery, having a knack for discerning and attacking vulnerability. Colin’s much dimmer, a literal mouth-breather who allows himself to be dominated by his brother. In brilliant performances, Daniels and Roth allow one to see how fighting masks love and codependency. Mark’s terrified of Colin having his own life because then he’d have no one to protect and would be consequentially robbed of a sense of identity. Colin’s equally trapped, his lonely eyes regarding the world from behind big glasses that suggest a cage, desperately searching for connection.

Mark and Colin drink beer, chain smoke, play pool, go with Frank to the unemployment office, and hang out with a skinhead, Coxy (Gary Oldman), who may have too much influence on Colin for Mark’s comfort. Colin’s attracted to a young woman in his periphery, Hayley (Tilly Vosburgh), though a romance is impossible given his social ineptitude. At first, the hopeless world of Meantime may seem dauntingly insular, as Leigh throws us into the deep end with these characters with none of the expositional orientation that’s typical of mainstream cinema, though Leigh gradually allows an intricate and astonishing series of psychological reverberations to surface.

Leigh captures the restless, maddening, emasculating, demoralizing stench of poverty and unemployment with an acuity and piquancy that’s nearly unrivaled in cinema. Leigh understands the distilled rage such living conditions trigger, recognizing this rage for what it actually is: bottled energy that can’t be released. Seeking to exorcise this anger, the Pollocks are always engaged in domestic squabbling for its own sake, which follows a circular structure and grants no relief, only intensifying the futility of a situation that’s characterized by broken windows and faulty washing machines and purposeless waiting and wandering in bars and slums. In the context Leigh provides, we understand why someone would become a skinhead, seeking a righteous inner purging via social belonging that refutes the gilded indifference of the Thatcher administration. A shot of Coxy screaming and thrashing about in a large metal barrel could serve as the film’s master image.

The filmmaker mercilessly contrasts Barbara and Mavis’s households. We only see Barbara’s home twice, but its openness haunts the cramped and dirtily vital images of the Pollocks’ flat. Intricate live-wire staging often emphasizes the humor of the Pollocks stepping over each other, trying to carve out their own private pieces of the flat, which is an everyday quest for dignity. A despairing comedic scene concerning the bathroom’s unavailability underlines the uncomfortable intimacy of four adults living in a few hundred poorly maintained square feet. Barbara eventually visits her sister, and, echoing Thatcher’s cluelessness, spouts off about economy as a benign system unassociated with notions of power. Barbara’s sentiments oddly anticipate something that Thatcher would infamously say a few years after Meantime: “And, you know, there’s no such thing as society.”

It would be easy for Leigh to write Barbara off as a privileged traitor to her own class, but the filmmaker is too titanic of an artist for such reduction. Not long after Barbara inadvertently humiliates Mavis, speaking of squalor as abstraction while standing in it, Barbara invites Colin over to her house to help her move furniture and paint. Barbara’s motivations for extending this invite aren’t easily explicated, though that doesn’t stop Mark from inviting himself over and ruining the day. The emotional infrastructure of this scene, Meantime’s climax, is dense and riddled with irony. Barbara feels guilt for her sister’s dire straits and pity for Colin, though she’s also staging a rebellion against John that Mark’s able to shrewdly uncover. Colin, finally thinking that he can have just a little something, just a shred of adult self-respect, retreats into himself, feeling as if he’s the victim of a conspiracy between Barbara and Mark. Meanwhile, Mark attacks Barbara ruthlessly, partially as a reprisal for her condescending visit to their flat and out of protection for Colin.

The disappointments, regrets, and insecurities of these people are suddenly crystal-clear in this scene, which evinces the multi-pronged empathy that’s characteristic of Leigh’s cinema. The aching tragedy here is that Barbara’s trying to do something decent for Colin—partially to satisfy her own need for generosity—only for it to fall apart in a fashion that reveals the limitation of her understanding of Mavis’s family. Mark finally relents, recognizing that he’s pushed Barbara too far when he throws her childlessness in her face, and remarks that this room in Barbara’s house is nicer than any in the Pollock flat. This uncertain attempt at reconciliation is heartbreaking. Lost and guilt-ridden, Mark tries to find commonality with Barbara via the luxury that he may never himself possess. Yet this luxury is a prison even for his aunt.

Leigh has an incomparable gift for scenes in which characters indirectly reveal inner yearnings just as we’re ready to write them off as yuppies or ruffians locked up entirely within their own self-absorption. Leigh is a miniaturist, a supreme stylist (his prismatic compositions are a marvel of evocative succinctness), and a caricaturist who merges melodrama with a sense of quotidian texture to arrive at fiction that has the unresolved thorniness of life. Leigh is also a cartographer, who maps the precise moments when people achieve fleeting communion in gestures that feel like miracles.

Created in 2K resolution, this Meantime transfer boasts a warm, appropriately soft and gritty image that’s rich in tactile textures. Facial details are extraordinary, lending the film a punishing docudramatic quality that contrasts fascinatingly with hyper-vivid bursts of colors such as red, green, and pink. While the image boasts a certain shagginess, there’s also a clarity that emphasizes the prismatic imagery, in which flats and streets are often divided into multiple crowded planes of people and bric-a-brac. The soundtrack honors the subtle aural stylization that’s also important to Mike Leigh’s aesthetic, foregrounding the pouring of beers, the throwing of bottles, and other actions that serve to heighten our complicity with the characters’ mood swings. Andrew Dickson’s lovely and unforgettably ambiguous piano score has also been rendered with painstaking clarity and dimensionality.

The interviews with actors Marion Bailey and Tim Roth, recorded in 2017 and 2007, respectively, shed light on Leigh’s mysterious filmmaking process. Eschewing traditional scripts, Leigh famously creates his characters in deep collaborations with his actors—a method that suggests a fusion of improvisation, therapy, and conventional dramatic scene structuring. Bailey potentially identifies the secret to Leigh’s aesthetic when she says that the actors are in control of their characters’ desires while Leigh determines whether or not said desires will be fulfilled. This sentiment suggests a key to achieving the remarkable sense of controlled chaos that Leigh captures in his films. Roth goes into particularly great detail, mapping out a succession of meetings in which he and Leigh created a character in insolation, who was then introduced to the rest of the cast (who also created characters in isolation), gradually building an entire world painstakingly from the ground up. Both of these interviews are essential for Leigh’s acolytes.

An interview between Leigh and musician Jarvis Cocker offers a more general overview of Meantime, allowing both men to voice their impressions of the film’s themes, characters, and wider resonance as a reaction to the Thatcher regime. Leigh says that Barbara’s misguided condescension of Colin was intended somewhat as a parody of government projects that were marketed as curing poverty while doing little to actually help Britain’s unemployed population. Leigh also reminds Cocker that he was accused by certain members of the far-left establishment of squandering an opportunity to make a real political statement—which is astonishing given the film’s progressive humanism. (Certain audiences wanted literal-minded agitprop rather than art.) Leigh and Cocker also cover Meantime’s origins as a TV production, which is how many of Britain’s more ambitious art films received financing during that time period, and how the formation of Channel 4 affected Leigh’s transition from playwright to one of the U.K.’s foremost filmmakers. This discussion is also essential. Rounding out a slim yet revelatory package is a superb, appropriately textural essay by film scholar Sean O’Sullivan.

Review: Nicholas Ray’s They Live by Night on Criterion Blu-ray