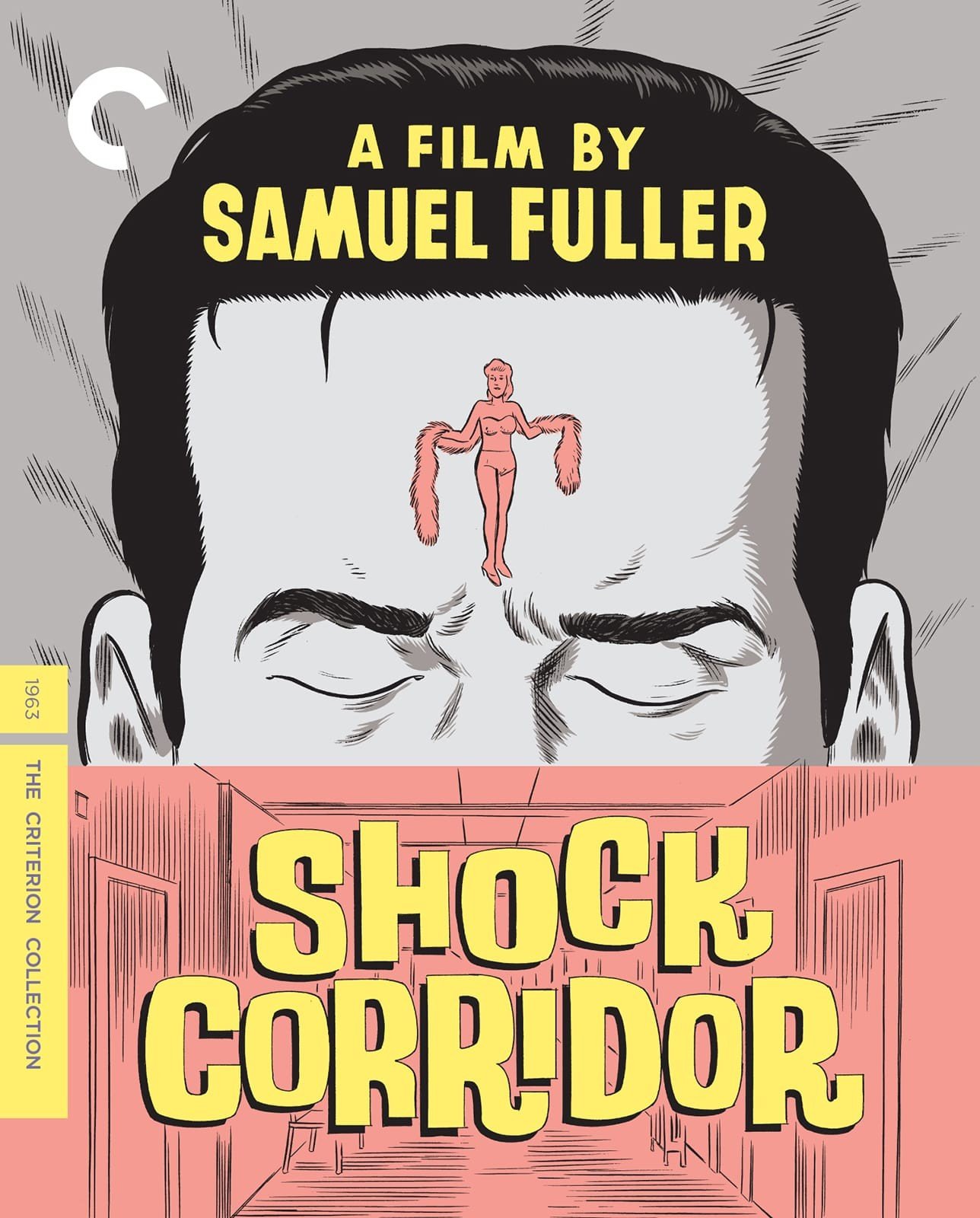 Hysteria is the steady tone of Sam Fuller’s Shock Corridor, a pulpy, feverish nightmare of a mental hospital as a metaphor for 1963 America. One of Fuller’s low-budget, cultishly adored features that followed his departure from 20th Century Fox, this melodrama maps the descent of a journalistic Icarus (Peter Breck) who feigns an incestuous mania for his sister—actually his wholesome stripper girlfriend (Constance Towers), grimly playing along after issuing Cassandra-like doubts—so he can be committed to an institution where a patient has been the victim of an unsolved murder. Fuller’s trademark of white-hot, idiosyncratic narrative that owes a stylistic debt to his youthful career in tabloid journalism unfailingly draws laughter in contemporary revival houses with its purple, punchy dialogue (“Do you think I like singing in that sewer with a hot light on my navel?” Towers’s nightclub angel pleads at one point). But with its focused, expressionistic marriage of florid, theatrically conceived “madness” and bleak social commentary, Fuller’s film overqualifies him as an artist to reckon with; it’s cinema pumped purely from the auteur’s heart.

Working on a handful of sets, often lighted in chiaroscuro patterns by ace cinematographer Stanley Cortez, Fuller presents Breck’s Johnny Barrett with three men whose minds have crashed—victims of mid-century American society—who hold the key to his investigation, but the spectacle of their damaged personae overwhelm the presumptively central mystery plot. A Southern veteran (James Best) imagines himself as a Confederate general to cover up his shame at his tenant-farming background and traitorous embrace of Communism during the Korean War; a black student (Hari Rhodes) who cracked in the crucible of collegiate integration now spouts the boilerplate vitriol of a white racist; and a Nobel-winning government physicist (Gene Evans), breaking under the doomsday pressures of the Cold War, plays hide-and-seek and wields crayons as a middle-aged six-year-old. Each manages to be lucid for long enough so the angling reporter can behold their former selves, and a hint of the tragedy awaiting Barrett as he is given electroshock therapy, suffers at the hands of the female ward’s inhabitants (“Nymphos!” shudders Breck’s voiceover), and begins to delude himself that his ecdysiast honey really is his sister.

Fuller’s gallery of walking symbols occasionally feels oppressively schematic, though there’s some perversely sly comic relief from Larry Tucker’s performance as a corpulent wife killer and opera buff called Pagliacci (”Such a sour note, Johnny!” he chortles at a primal scream by Breck). But the total effect remains strange and harrowing, particularly in Shock Corridor’s strongest images: the linear patterns of the ward’s corridor and barred windows; the stripper’s breath blowing through a boa wrapped around her face; a climactic thunderstorm that rages in the reporter’s deteriorating psyche; and the twisting of a catatonic man’s rigid hands into a facsimile of an embrace. Lurid and jarring, Fuller’s supra-clinical infiltration of fractured sanity may lack the cool cachet of Ken Kesey’s contemporaneous novel One Flew over the Cuckoo’s Nest, but the disturbing, singular vision of Sam Fuller still generates heat.

The black-and-white lensing of Stanley Cortez, veteran of The Magnificent Ambersons and The Night of the Hunter, looks canny and accomplished in Criterion’s sharp transfer; a 10-day shoot likely necessitated the TV-style lighting in many of the expository dialogue scenes, but Cortez and Fuller make resourceful use of shadows and shafts of light at crucial turning points, to nearly as striking effect as the European art cinema of the period. The mono sound is clear and occasionally atmospheric, as in Peter Breck’s interior-monologue voiceover and Constance Towers’s strip number in which her disembodied voice also calls “Johnnnyyy…”

On this single disc the standout among the supplements is Adam Simon’s 1996 hourlong documentary “The Typewriter, the Rifle and the Movie Camera,” a profile of Samuel Fuller’s character and sensibility that conveys the essence of his unsentimental, humanist work. Fuller, living in Paris at the end of his life, tells Tim Robbins that he “lied like hell with the camera” in showing soldiers simply falling dead in his war films, unlike the carnage he witnessed as a rifleman with the First Infantry: “Head here, balls there, ass over there.” Robbins and Quentin Tarantino geek out going through Fuller’s trove of memorabilia, finding the titular Steel Helmet and a photo of teenage Sam as a New York tabloid reporter. Martin Scorsese chimes in with his memories of seeing Fuller’s films as a child and sensing the authenticity and “emotional violence” suffusing them, and Jim Jarmusch adds his impressions of the filmmaker’s irascible existentialism and elusive worldview (“You can’t pin Sam down”).

A 2007 interview with Constance Towers, star of this film and Fuller’s The Naked Kiss, has her comparing the directorial tactics of “Sammy” (firing blanks from a gun to get the cast’s attention) and her mentor “Pappy” John Ford (emotional manipulation of the stars through their spouses or alcohol). A suitably high-strung trailer for Shock Corridor labels Towers’s good-girl stripper with a judgment of “Diagnosis: Manic sensualist.” The disc’s booklet features excerpts from Fuller’s autobiography describing his conception of the film as “a metaphor for America” with “the subtlety of a sledgehammer,” evocative illustrations of scenes by comic artist Daniel Clowes, and a Robert Polito essay analyzing “the many play-within-a-play trapdoors” of the movie.