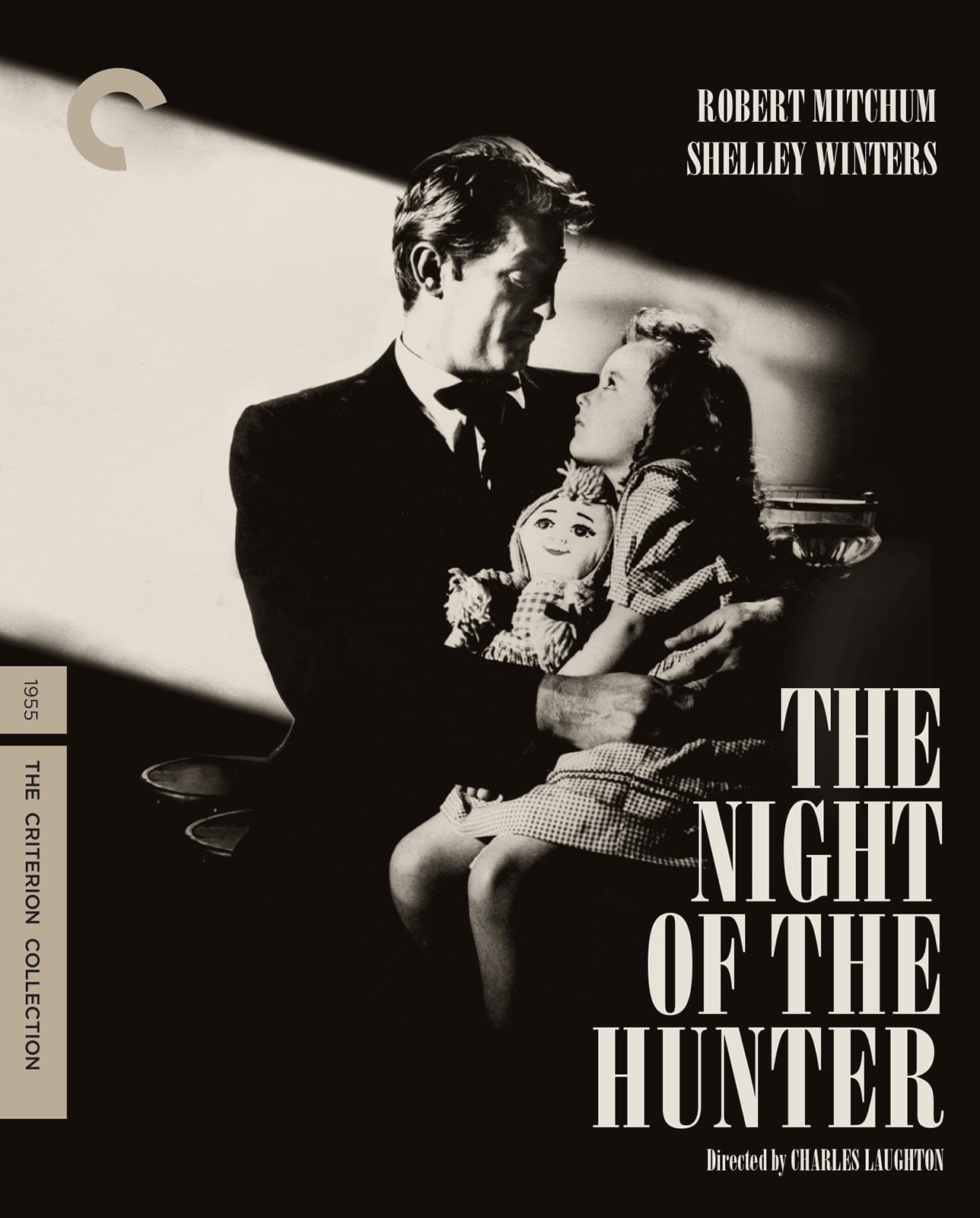 Once again, occasion calls for a citation of Jean-Luc Godard’s immortal, guiltlessly auteurist definition of cinema: “There was theater (Griffith), poetry (Murnau), painting (Rossellini), dance (Eisenstein), music (Renoir). Henceforth there is cinema.” Obviously, the climax of the statement famously passed the torch of cinema on to Nicholas Ray, but it’s also a useful antithesis to The Night of the Hunter, the all-time odd man out in American movie history. Actor Charles Laughton’s only film as a director is a genre-transcending wonder which harkens back to the primordial essence of moviemaking’s earliest days and paradoxically feels fresher than almost any other movie imaginable. Godard’s own polemical platform, Cahiers du Cinéma, recently voted it the second “most beautiful” movie ever made, just behind Citizen Kane. Laughton worked closely with man-about-town writer (and godfather of popular film criticism) James Agee to transpose Davis Grubb’s fevered, Southern pulp thriller into a lucid, poetic, terrifying work of pure intuition.

Based loosely on a true-life series of crimes out of West Virginia, Grubb’s novel tells of Harry Powell, an unscrupulous jailbird whose cellmate tells about the enormous sum of money he stole, and how he hid it somewhere on his wife’s modest estate. Following his cellmate’s execution, Powell adopts the persona of a false preacher. Sweeping through a downtrodden but proud, itchy but traditional section of American territory, the pious fox finally locates the rabbits’ den and ingratiates himself to everyone in town, including his cellmate’s widow Willa Harper. Only Willa’s son John knows the whereabouts of his father’s score, and only he seems aware of Powell’s capacity for evil, cloaked well within the his guise of old time religion. The film version of The Night of the Hunter is rightly celebrated for Robert Mitchum’s complex, varied, frequently hysterical, always commanding performance as Powell. He’s unquestionably the movie’s dark heart, but just as Powell’s two tatted hands bear out the battle between “LOVE” and “HATE,” there are more omniscient forces at work here.

Laughton and Agee’s adaptation zeroed in on the novel’s Faulkner-meets-Brothers Grimm overtones and maximized the tonal contradictions. As noted by a number of film scholars, Laughton’s background working with Bertolt Brecht rubbed off on his direction of The Night of the Hunter, with seemingly incompatible moods, styles, and human behavior all working to create the sort of distancing effect that would allow for some of the most effective gear shifts to ever spike a nominal thriller. Laughton’s movie blends time-worn, then-outmoded effects straight out of the D.W. Griffith playbook (such as irising the camera in on an object of note, or cross-cutting between the chaser and the chased) with revitalized tinges of German expressionism courtesy cinematographer Stanley Cortez (not just in the spare, angular set design and menacing use of shadows but even, in the movie’s penultimate riot scenes, borrowing heavily from the American works of émigrés like Fritz Lang’s Fury).

Laughton turns the notion of guardianship topsy-turvy, so that the adults frequently come off as more childlike than the movie’s actual children, John and his perpetually nonplussed kid sister Pearl. For instance, as Willa Harper, Shelly Winters delivers a performance of unexpected reservation, imbuing the spirit of a woman so broken by the failure of domestic structures, and so invested in the fire of evangelical Christianity as a potential solution to her situation, that she acquiesces to Powell’s authority even when she learns of his true intentions, accepting her death by his hand as satisfactory. (The instability of domesticity—“It’s a hard world for little things”—is a recurring motif whose punchline can be found in the fact that the movie’s only stable marriage is found in Icey and Walt Spoon, a clucking fussbudget and her henpecked eunuch husband.)

Laughton and Agee refuse to shy away from the gothic flights of fancy inherent in the source novel and its cognitively humid milieu. Few moments in movie history are as shockingly bold, and simultaneously ethereal, as the moment the newly orphaned John and Pearl narrowly escape Powell’s slashing knife and float down the river on a skiff. In the space of 15 seconds, the movie transitions between a moment of pure horror—capped by Mitchum’s hellish bellow of frustration—into a slow, starry-skied journey into an American pastoral twilight, capped by a seemingly diegetic musical number about a “pretty fly” sung spontaneously by Pearl. It makes sense because Laughton and Agee believe it makes sense, and everything in The Night of the Hunter emerges similarly with the plain logic of a fairy tale—a fairy tale whose grace notes (i.e. the near-match cut between two shots of Powell grasping for the children as they advance up the cellar stairs, the first one showing him lying belly down on the ground, the next depicting him suddenly and horrifyingly on his feet again) seem as intimate as your own half-remembered nightmares. By the time Laughton turns his movie over, in its final act, to the life force that is Lillian Gish’s plain-spoken, Bible-quoting mother goose Rachel Cooper, it’s clear that there are few movies as confidently and as contradictorily American as this. In every possible sense, halfway between Halloween and Christmas is The Night of the Hunter.

MGM’s original DVD of The Night of the Hunter boasted about as good a transfer as you could expect from a bargain disc pressed in the format’s earlier days. Criterion’s Blu-ray blows it clean out of the river. Important as the movie’s shadows are, Criterion’s transfer executes black levels with perfection. The print is clean enough to see the seams on those process shots. The framing is tighter than it seemed on the MGM disc (which was presented full frame). The chromatic range is full. It looks so perfect, it’s sort of a shame that the audio can’t be rated quite as highly. It’s no patch on the movie itself to note that sound recording just couldn’t compete with the cinematography. The monaural sound is hardly flat, and it’s clear, but the music score by Walter Schumann is evocative enough that one wishes it could’ve been better represented.

This two-disc Blu-ray, which spans three discs in Criterion’s DVD release, leaves out absolutely nothing—short of the shooting script, which is available in the Library of America’s collection of James Agee’s film writings. There’s a fantastic commentary track featuring four of the film’s acolytes, including the movie’s second unit director Terry Sanders. They collectively strike a great balance between pedaling information and revealing their enthusiasm for the movie. If that’s not enough, the first disc also includes a 40-minute documentary assessment of the movie’s virtues and themes, and its place within Charles Laughton’s career. Vintage clips show conversations with Robert Mitchum, Shelly Winters, Stanley Cortez, and others, and a clip from The Ed Sullivan Show features a live performance of a scene between Winters and Peter Graves that never made it into the final film.

Speaking of things not in the final film, the second disc is devoted to a 160-minute collection of archival footage and outtakes Laughton’s widow Elsa Lanchester was holding on to. Collected into a documentary called “Charles Laughton Directs The Night of the Hunter,” the bonus footage pulls back the curtain on how an American classic came to be. Among other treats, you get to see Laughton slapping young Billy Chapin in the stomach to get him to properly convey the pain of seeing his father arrested and Lillian Gish admitting she’s afraid to appear in front of the camera again. You also get to hear Sally Jane Bruce’s original singing on the “pretty fly” song, and you come away from it all betting some of those tears in her eyes were the direct result of Laughton. In this case, the end justified the means.

Icey Spoon’s response to Harry Powell’s snakelike jeremiads about says it all for this Criterion release: “Amen, amen!”

Review: Lisa Cholodenko’s The Kids Are All Right on Universal Blu-ray