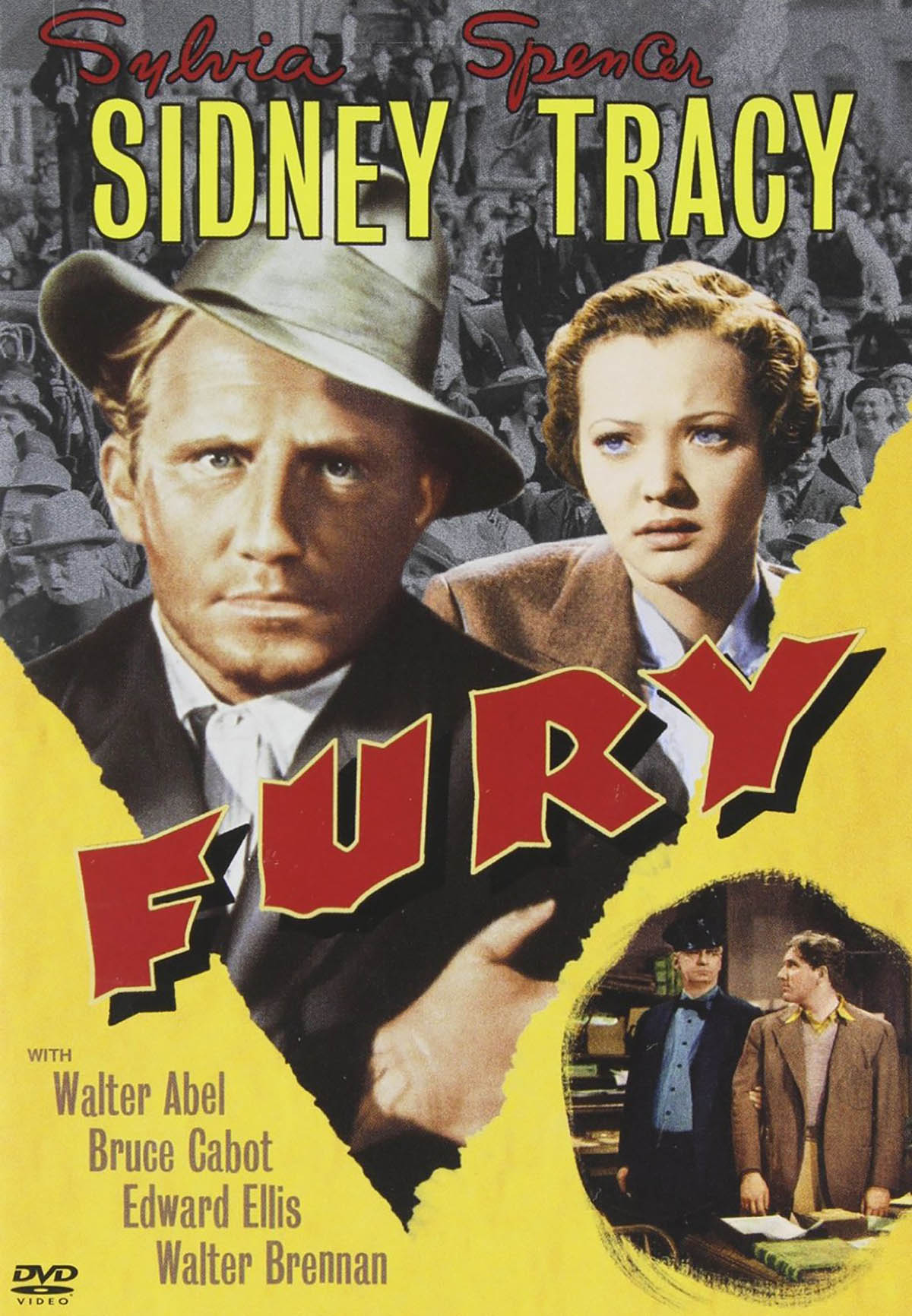 Shortly after The Testament of Dr. Mabuse was completed and ready for release, the Nazi party became concerned with the film’s terrifying vision of a submissive community held under the spell of an absolute authority, so much so that the film was banned outright. But Mabuse’s vibrant aesthetic still had its admirers, including Joseph Goebbels. When Fritz Lang famously met with Goebbels at the Ministry of Propaganda on March 25, 1933, Hitler’s crony offered the famous director a position as head of the German film industry. Smelling a trap, Lang fled the country to Paris and then to the United States, where he enjoyed a near 30-year career making films, many of them corrosive studies of human frailty that often mirrored the Nazi rise to power.

If there’s a single iconic moment that best summarizes Lang’s aesthetic and philosophical outlook it’s the sight of Gloria Grahame’s hideously disfigured face falling to one side at the end of 1953’s The Big Heat, a dynamic representation of the duality between good and evil. When the thug played by Lee Marvin throws hot coffee in his girlfriend’s face, he essentially triggers her capacity for kindness; in a sense, her physical ugliness opens her eyes to the ugliness of the world. A similar duality seems to exist between The Testament of Dr. Mabuse and Fury: If, according to Noel Murray of The A.V. Club, the latter evokes “how human frailty gives fascism room to grow,” one could say the latter articulates how fascism gives human frailty room to grow.

Katherine Grant (Sylvia Sidney) moves cross-country to a small town in order to finance her future with boyfriend Joe Wilson (Spencer Tracy), but their vision of the American Dream is squashed when Joe arrives in town with his pet dog and is arrested and jailed by deputy Bugs Meyers (Walter Brennan) for alleged kidnapping. Only a bag of peanuts and a $5 bill that feeds the local rumor mill links him to the crime, but that’s enough for an angry mob to indict Joe and burn the local prison down with him inside. When the real kidnappers come forward, 22 people are brought to trial for Joe’s murder. Except no murder was actually committed: Having escaped the prison fire, a revenge-obsessed Joe now conspires with his brothers to feed the prosecution the necessary evidence to hang his victimizers.

When the townsfolk challenge deputy Meyers and his underlings outside the prison, what unravels is a phantasmagoric spectacle of human self-degradation. Throughout this memorable sequence, during which the townsfolk defy local authority and break into the prison before burning it down, Lang evokes how our animal instincts often run counter to our duties as decent, responsible human beings. In this way, Joe’s predicament reverses the premise of Lang’s famous M, in which a guilty killer is hunted by an angry mob, and also sets up a comparison to Debby Marsh’s ethical challenge at the end of The Big Heat: Joe is kind and caring but is turned into something altogether bad when confronted with the ugliness of those around him.

There is no image in the film more famous than the sight of a woman throwing a lit torch at the prison. The woman’s expression is one of gross excitement and smug self-satisfaction. It’s as if she’s showing off for the world around her and, in a way, she is—unbeknownst to her, a local cameraman is recording and, in effect, corroborating her failure as a human being. One of Lang’s great talents was his ability to understand and chart the darkest parts of the human psyche, often using grotesque exaggerations of human virtue and corruption to force audiences to confront the horrors in the world and their connection to them. This is exactly what Lang does with this brilliant shot, which chillingly mirrors the sight of Lynndie England smirking and pointing at Iraqi prisoners at the Abu Ghraib correctional facility in 2004.

England wasn’t the only one striking a sinister pose when the Abu Ghraib prison scandal rocked the world. Both the White House and liberal pundits immediately scrambled to co-opt the moment. One side struck a stance of righteous indignation while the other hoped to use the pictures of physical and sexual torture to hurt Dubya’s reelection campaign. But amid the congressional and media spitfire, no one could see that the real cause for this human rights offense wasn’t some Bush administration edict that never existed but a disturbing part of the human psyche that manifests itself in times of unflinching crisis—regardless of the culture-specific context—and is wordlessly encouraged by a suspicious and self-gratifying segment of the body politic.

No one understood this ominous place as profoundly as Lang, whose first English language film seemed to anticipate the horrors at Abu Ghraib as far back as 1936. This, of course, is not to say that Lang was some kind of soothsayer. While it’s significant that fortune telling figured prominently in many of Lang’s great thrillers, most intensely in The Ministry of Fear, Lang simply understood that our capacity to do harm followed predictable and often irrational paths of expression, almost always determined by a longing for self-preservation. “Vengeance is a lazy form of grief,” says Nicole Kidman’s character in The Interpreter. It’s the best line in Sydney Pollack’s self-righteous psychodrama and one that summarizes the vast scope of Lang’s masterful Fury, which was adapted by Bartlett Cormak and Lang from Norman Krasna’s story Mob Rule.

Perhaps in response to the lynching of Rubin Stacy in Fort Lauderdale on July 19, 1935, Krasna wrote Mob Rule as a means of studying humanity’s weakness in times of groupthink. In many ways, Lang was the perfect director to bring the short story to the screen. The Holocaust was still some time away but the roots for Hitler’s eugenics policies had already been planted, at which point the German people set about to cultivate its growth. Lang, a great social observer, recognized the parallel between German complicity in Hitler’s rise to power with that of people in small American towns who turned the other cheek to the lynching of blacks in the South. This is what gives Fury it’s great power: its pertinent allegory isn’t exclusive but something powerfully all-encompassing.

Similar to what happens to Joe in Fury, the horrors at Abu Ghraib represent a brazen show of territorial force, and in the same way that the people in the film’s small town come together to protect and lie for their neighbors, there were those who similarly came to England’s defense. After the Abu Ghraib scandal, radio talk-show host Rush Limbaugh chillingly defended the young woman and her fellow perps by saying they were simply “letting off some steam,” in essence attributing their actions to that of wild animals marking their territory. Limbaugh’s callous comment goes a long way in explaining what really fueled the prison scandal: As long as people like Limbaugh exist who communicate that England’s actions are justifiable, people like England will continue to commit those actions.

Lang understood this give-and-take very well, which is why Fury’s most impressive achievement may be the way it incorporates the audience into its complex moral agenda. Shocked to learn that Joe may be alive and helping the state to lynch 22 “innocent” lives, Katherine—a stand-in for the spectator—is swept up in her boyfriend’s own quest for guerilla justice. Like the deliberately darling tone of the film’s first few scenes, Fury’s final shot represents a show of human faith: Joe comes to his senses, admits to conspiring the deaths of his torturers, and embraces Katherine and their American Dream. In a way, the ending of the film is insanely anti-climactic, but that’s more or less the point. In refusing to satiate Joe and the audience’s lazy thirst for retribution, Lang acknowledges that a show of human compassion prevents the growth of fascism.

The mono sound is about what I expected: dialogue is clear but hissing and crackling is still audible throughout. The image fares slightly better: the blacks and whites of the considerably specked-up print vary in quality, but shadow delineation is strong and there are no incidents of edge enhancement.

An excellent commentary track by Peter Bogdanovich, whose critical observations aren’t as interesting as his endless arsenal of anecdotes concerning Fritz Lang’s career and life in Hollywood. Bogdanovich’s commentary is frequently intercut with fascinating excerpts from an audio interview he conducted with Lang in 1965. Lang discusses his struggles with the English language, his fascination with the American way of life, the elaborate social criticism of his film, and an early idea he and Bartlett Cormack had about making their lead character guilty but still being able to make an equally strong case against capital punishment. Also included here is the film’s theatrical trailer.

The image and sound quality is serviceable, but this is still one of the most noteworthy DVD premieres of the year.