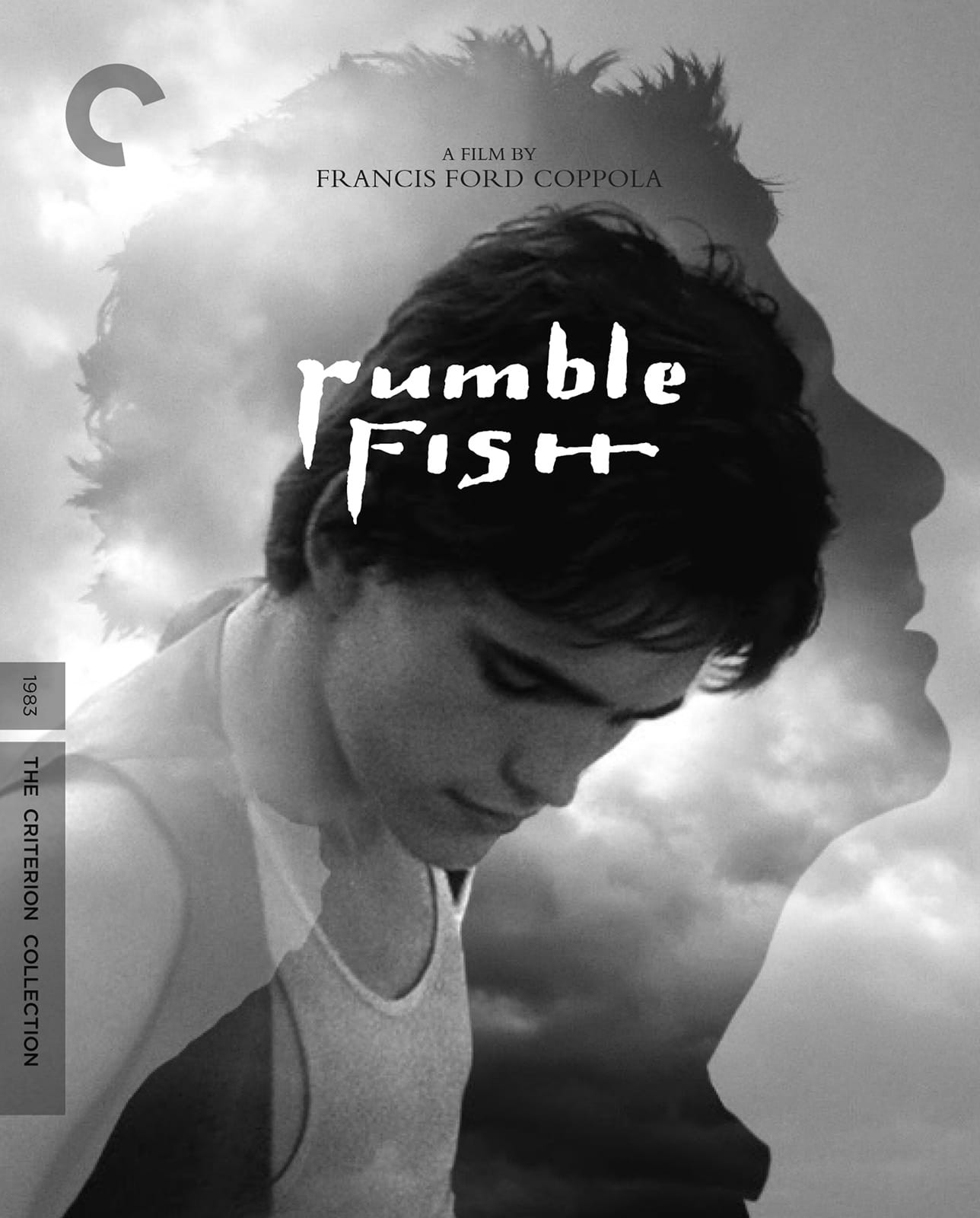 Francis Ford Coppola’s Rumble Fish belongs to a chain of 1980s-era films that are obsessed by the cultural symbols and tropes of the 1950s. The film’s characters speak in a musical and emotionally heightened tapestry of poetry, clichés, and platitudes that wouldn’t be out place in a ‘50s urban melodrama, a Tennessee Williams knock-off, or in, say, Walter Hill’s similarly self-conscious Streets of Fire, which, like Hill’s The Warriors, blends a myth of ‘50s idealism with ‘70s nihilism. And Rumble Fish’s fetishistic emphasis on ‘50s-centric places of fading relevance to contemporary culture—the pool hall, the pharmacy soda fountain—retrospectively brings to mind films like Robert Altman’s Come Back to the Five & Dime, Jimmy Dean, Jimmy Dean. There’s a sense in this ‘80s cinema of an illusory paradise lost, of heroes stuck in a time warp of an imagined vision of the past. The protagonists of these films rarely think of the ‘50s in terms of, say, communist paranoia or racial segregation, homing in instead on the seductive iconography of the time, which provides totemic distraction from the instability of their lives.

Contemporary filmmakers now look to the ‘80s in a longing fashion that parallels how artists of the decade drew upon the ‘50s. (These intergenerational dialogues are particularly evident in the horror genre.) Depoliticized totems are intensely, dangerously comforting, and a stylized retro production allows its creators to fuse past and present elements in a manner that creates a best-of-all-worlds reality. Wouldn’t it be a turn-on, for instance, if the beautiful teenagers of Rebel Without a Cause were allowed to cut loose sexually? Such an impulse inspires a startlingly erotic interlude in Rumble Fish, in which teens fool around in a dilapidated house. Coppola doesn’t show youthful sex as most understand it, as he lingers on curvy female bodies and muscled male forms as they comingle with the confidence of experienced adult dancers. He doesn’t show sex but rather our dream of it.

Rumble Fish is the greatest and most moving of Coppola’s über-stylized ‘80s experiments, in which he attempted to pivot away from his image as a ‘70s-era studio classicist into a dreamy formalist. The formal and thematic excess of One from the Heart, The Outsiders, and Rumble Fish, among others, isn’t merely artistic masturbation. Coppola strives for political de-politicization, reveling in a simplified past while acknowledging the irony and loss inherent in said simplification. The Outsiders is a juvenile-delinquent film that parrots the Technicolor extravagance of Gone with the Wind, which troublingly sandpapered over many implications of the Civil War, such as the atrocity of slavery. The Outsiders critiques this aesthetic by using it to soften the violence of a class war in miniature, heightening the violence’s emotional reverberations via abstraction. Rumble Fish utilizes deep-focus, black-and-white imagery to conjure a ‘50s-era noir land that’s reminiscent of countless crime films as well as the work of Orson Welles and, of course, Peter Bogdanovich’s The Last Picture Show. Rumble Fish’s cinematography positions it as an almost literal X-ray of The Outsiders, which are both based on novels by S.E. Hinton and were shot by Coppola consecutively.

The writing and direction of Rumble Fish are both obviously and elusively symbolic, achieving a paradoxical subtlety. The constant need of Coppola and these characters to profess—about the fleetingness of time, about the perceived limits of identity—hints at unseen, unknown need, and neurosis. We intuitively understand that the imagery connotes a dysfunctional relationship with a pop-cultural facsimile of the past, but that doesn’t stop Coppola from explaining the device and literalizing it anyway. Motorcycle Boy (Mickey Rourke), a young rebel who represents All That Once Was in the realm of youthful biker outlaws, is said to be periodically deaf and color blind, locked in a world of black and white, though he’s ironically the character most capable of discerning emotional nuance. Motorcycle Boy’s brother, Rusty James (Matt Dillon), presumably sees in black and white too, because he’s endlessly and hopelessly devoted to his elder sibling—until a late-act burst of color signifies a potential evolution of purview.

Coppola follows Motorcycle Boy and Rusty James as they navigate Tulsa, Oklahoma, which is rendered as a series of despairingly sentimental references to other movies. A gang fight that opens the film masterfully suggests a musical dance number from West Side Story, only with a more percussively visceral emphasis on violence and profanity. Every street is bathed in fog and shadow, captured in piquant, playful off-angles that emphasize the gorgeous depth of the photography. And the prismatic interplay of chiaroscuro effects—in relation to faces, objects, and serpentine architecture—is often so vividly rapturous as to distract one from the scant narrative, which is the point. This oxymoronically artificial tactility is the narrative, and it allows Coppola to paint a vast and intimate portrait of youthful loneliness and self-pity. Rumble Fish is never said to take place in the ‘50s, but it captures the ‘50s of Motorcycle Boy and Rusty James’s most glorious daydreams. Without these dreams, they’re drifters in search of a real home. With these dreams, they’re existential heroes.

There’s a bit of beautifully rough and soft graininess in a few scenes featuring brightly colored fish that’s probably inherent to the source material. Otherwise, this 4K restoration overseen by director Francis Ford Coppola and cinematographer Stephen H. Burum is unambiguously pristine and ravishing. Blacks are deep and velvety, while the whites are warm, sharp, and subtly varied. And textures really pop, as one can discern cracks in streets as well as blemishes on the iconic actors’ faces, grounding the highly figurative film in a docudramatic kind of pseudo-reality. I didn’t discern a huge difference between the 2.0 and 5.1 soundtracks, but both crisply handle Stewart Copeland’s precise and evocative score, while lending the on-screen soundscapes a stable sense of body and bass. Nearly subliminal noises, such as the rustling of the wind, have an appropriately light presence.

This supplements package is composed of an astute mixture of past and present featurettes. Coppola’s commentary has been ported over from a 2005 home-video edition of the film, and it’s a characteristically warm and open listen that dives unpretentiously into filmmaking as well as personal anecdotes. He related to the story of Rumble Fish because he once felt overshadowed by his own older brother, August, and he discusses the myriad ways this experience came to influence his direction here. A variety of archive interviews with many of the film’s principles complement contemporary interviews that have been recorded this year specifically by Criterion, offering an illustration of the sort of passage of time that so concerns the film. Coppola’s new interview unavoidably echoes his commentary but is worth watching, and S.E. Hinton offers sharp observations about working with Coppola, who understood the novel’s mythological symbolism. Hinton also nurses amusing irritation with the film’s constant profanity, which wasn’t in the script and happened because, she believes, the predominantly male cast was inspired by Raging Bull and each fancied themselves to be the next Robert De Niro. There’s also an excellent new piece that concentrates on the existentialist themes of Rumble Fish, including comparisons to French philosophy and literature, as well as the French New Wave and the cinema of Marlon Brando and James Dean. Rounding out this package are deleted scenes, which include a new intro by Coppola in which he discusses his need to tone down the film’s realistic textures; “Looking for Rusty James,” a 2013 full-length documentary about the film’s emotional impact on its director; the film’s trailer; a music video; and an essay by critic Glenn Kenny.

One of Francis Ford Coppola’s most underrated and deeply felt films receives a gorgeously ephemeral restoration that should hopefully jump-start its reevaluation as an essential American work.