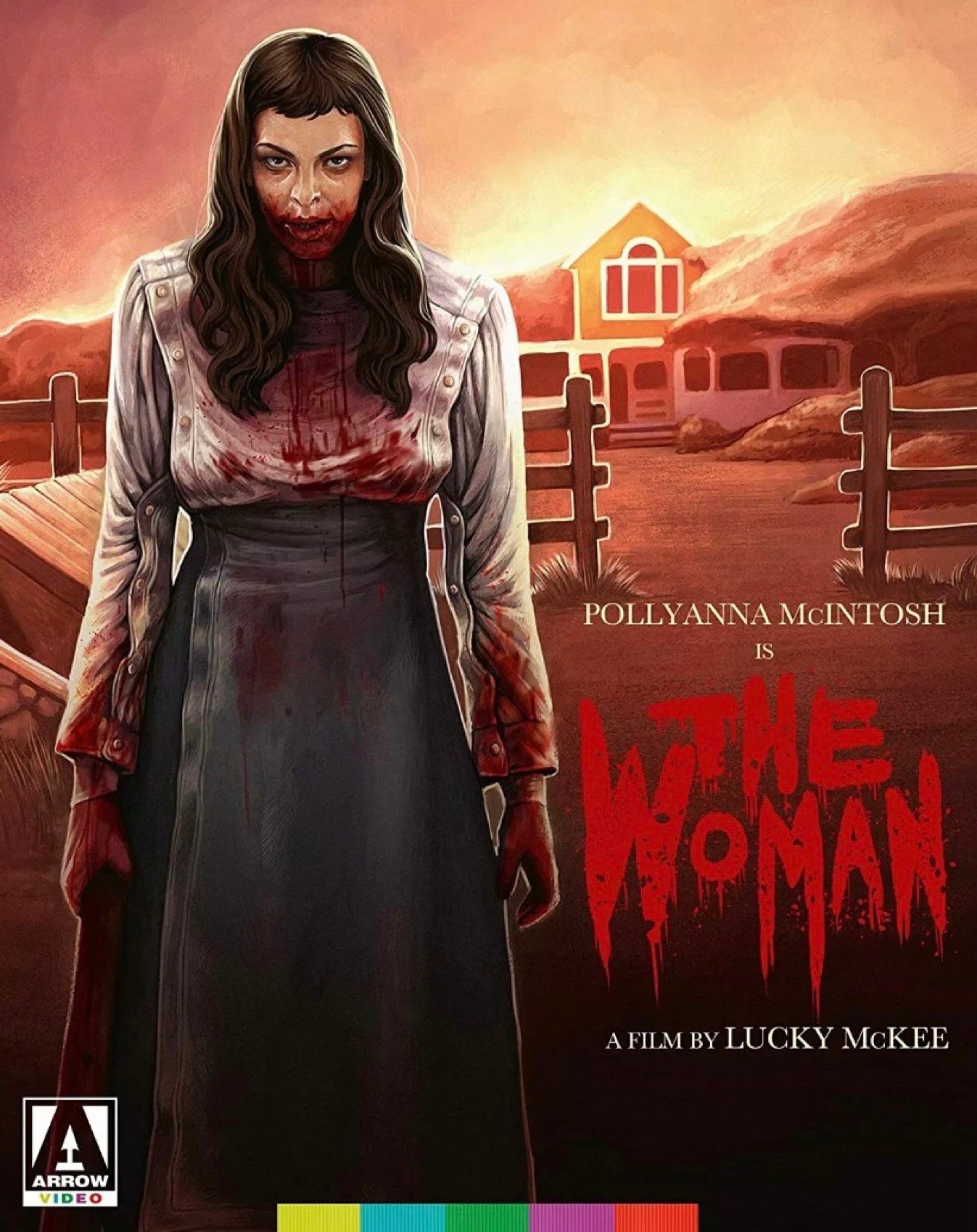 Lucky McKee’s The Woman is a welcome antidote to one of the most pernicious diseases of our times, an epidemic of glossy remakes that have gelded the relentlessly grungy energy of many a ’70s horror classic. Scripted by McKee and novelist Jack Ketchum, the film is a slow-burning but incendiary device, a brutal satire on the sanctity of the nuclear family and its conservative “values” that, like the majority of Ketchum’s work, seems to delight in burrowing down to the dark discontents that gnaw away at what nowadays passes for civilization.

A sequel of sorts to Andrew van den Houten’s The Offspring, The Woman picks up with its titular character (Pollyanna McIntosh), the sole survivor of the earlier film’s cannibal clan, eking out an existence in the Maine woods like some unspoiled noble savage. The hallucinatory opening sequence plays like an unholy marriage between Lars von Trier’s Antichrist and Francis Ford Coppola’s Apocalypse Now, down to the hand-scrawled title and synth-heavy score squalling and droning away on the soundtrack. Shot in dreamy slow motion, the Woman’s actions, loping with knife in hand through densely knotted underbrush, crawling into a cavernous lair to tussle with its lupine occupant, are played and replayed in multiple superimpositions, contributing to a fractured, febrile feel that’s only heightened by a surreal dream involving a swaddling infant and a she-wolf.

It’s at this point The Woman abruptly shifts in tone and location. An idyllic summer barbecue and pool party introduces the members of the Cleek family, each wrapped up in their separate pursuits, indicative from the start that this clan’s solidarity is entirely fictive. Soon enough, the postcard-pretty surfaces give way, revealing deep chasms of tension and resentment.

Chipmunk-cheeked patriarch Chris (Sean Bridgers) enjoys hectoring his tightly wound wife, Belle (McKee regular Angela Bettis), with a mix of derisive sarcasm with ice-cold contempt (shades of The Shining’s Jack Torrance), while she maintains an outward appearance of normalcy, zombie-shuffling along grocery store aisles and fussily baking cookies. (If you detect a sly nod to the Woman’s digit-devouring predilections in the scene where the Cleek kids delight in chopping up and chomping their gingerbread men, you just might be onto something.) Daughter Peg (Lauren Ashley Carter), a Wednesday Addams for the Twilight generation first seen poolside reading John D. McDonald’s The Price of Murder, harbors a scandalous secret under her baggy clothes: a budding baby bump. Compulsive hoop-dreamer Brian (Zach Rand), a sociopath on training wheels, soon reveals his cruel streak when he sticks gum in the brush of a girl who’s beaten him in a free-throw contest, all the better to helpfully yank her hair out by the roots. And then there’s little Darlin’ (Shyla Molhusen), the youngest, her untrammeled innocence up for grabs in the film’s blood-spattered endgame.

When huntsman Chris rides his ATV into the woods one morning, he spies the Woman washing herself in the river. He disguises his lust at first sight, given vent in a hilarious montage of prurient glimpses of the Woman’s nakedness set to a power-pop love song, by hatching a scheme to capture and rehabilitate the feral woman. Not one to fly solo, he enlists the whole family, tasking them with cleaning out the fruit cellar and making it comfy for their new guest—that is, if by comfortable you mean dangling her by the arms from a block and tackle. The Woman becomes a reclamation project of sorts for Chris, the recipient of an extreme makeover, Cleek Edition, as he imposes his own warped notion of civilized values on his captive, including rudimentary etiquette lessons like learning to croak a plaintive “please” in exchange for her gruel. As Chris opines, “We can’t have people wandering around the woods, thinking they’re animals. It isn’t right.”

McKee directs with assured simplicity, scoring points with his lucid shot compositions, like a startling two-shot that links mother and daughter, calling to mind the split-screen hijinks of peak-period Brian De Palma, just as an extended 360-degree pan near film’s end, with the camera swirling deliriously around Chris and Peg, plays as a perverse nod to similar emotional crescendos in Carrie and Body Double. Sean Spillane’s superb, protean soundtrack, straddling styles with chameleon-like adroitness, often stands in ironic counterpoint to events on screen. Ketchum and McKee dispense revelations and plot twists in canny dosages, allowing the viewer to connect most of the dots, a suggestive approach that works to maintain active involvement, rather than jolting the audience into passive capitulation.

That is, until an explosive finale, triggered by young Peg’s home situation draws the attention of her overly solicitous geometry teacher (Carlee Baker), whose good intentions prompt an ill-conceived visit to chez Cleek. Seems Chris has more to hide than his daughter’s pregnancy. There’s the little matter of a hitherto unseen family member who’s landed in the doghouse for an extended stay. Regardless of how you happen to feel about its outrageously graphic gore, the finale suffers by comparison for its too-pat “return of the repressed” resolution, meting out morally tidy eye-for-an-eye punishments. In the end, a radically realigned family unit emerges from the carnage, one that puts the blood back into blood relations.

Arrow Video’s 4K restoration of The Woman from a digital intermediate looks spectacular, with a substantial increase in clarity and depth compared to the 2012 Bloody-Disgusting Selects Blu-ray. Black levels are deep and uncrushed, grain well managed, and flesh tones healthy. Colors are vivid and deeply saturated. There are two audio options: a 5.1 DTS-HD Master Audio surround mix and the original stereo track. The former finds some excellent use for the side and back channels for ambient sound effects like rattling chains, as well as sturdily conveys Sean Spillane’s pop singles-heavy soundtrack.

Arrow assembles a truly comprehensive selection of bonus materials for this Blu-ray release of The Woman. There are four commentary tracks, three by various combinations of cast and crew, which exhaustively cover every aspect of the film’s production history, from inception to reception. The fourth track is from writer Scott Weinberg, who offers a refreshingly chatty, informal, and sometimes humorous appraisal of McKee’s film, though you may wish that he hadn’t so heavily pulled “material” from his Twitter feed.

“Dad on the Wall” is 75 minutes’ worth of raw behind-the-scenes footage shot by director Lucky McKee’s father without any sort of talking-head commentary. A more compact version of the same, which does include observations from cast and crew, can be found in “Malam Domesticam,” which contains some pretty great footage that illustrates the grisly practical effects that dominate the film’s third act. It’s bookended by footage of the outraged Sundance premiere attendee who thought the film should be “banned and burned.”

“Meet Peggy Cleek” is a charming interview with Lauren Ashley Carter, who touches on the process of finding the emotional intensity her role required, that fateful Sundance premiere, and the odd accommodations during filming (a rundown boarding school complete with a tank of piranhas and frog living in one of the shower stalls). There’s a fascinating panel discussion from the 2011 Frightmare Festival, in which a rogue’s gallery of contemporary indie horror filmmakers—including McKee, Adam Green, Ti West, and Larry Fessenden—discuss the state of horror cinema at the time (which is still largely the case, alas), sharing plenty of hilarious anecdotes involving pitch meetings and studio notes. The roster of supplements is rounded out by some deleted scenes, a short piece of bizarro animation from The Woman’s editor Zach Passero, a music video, and assorted promotional materials.

The Walking Dead Recap: Season 7, Episode 16, “The First Day of the Rest of Your Life”