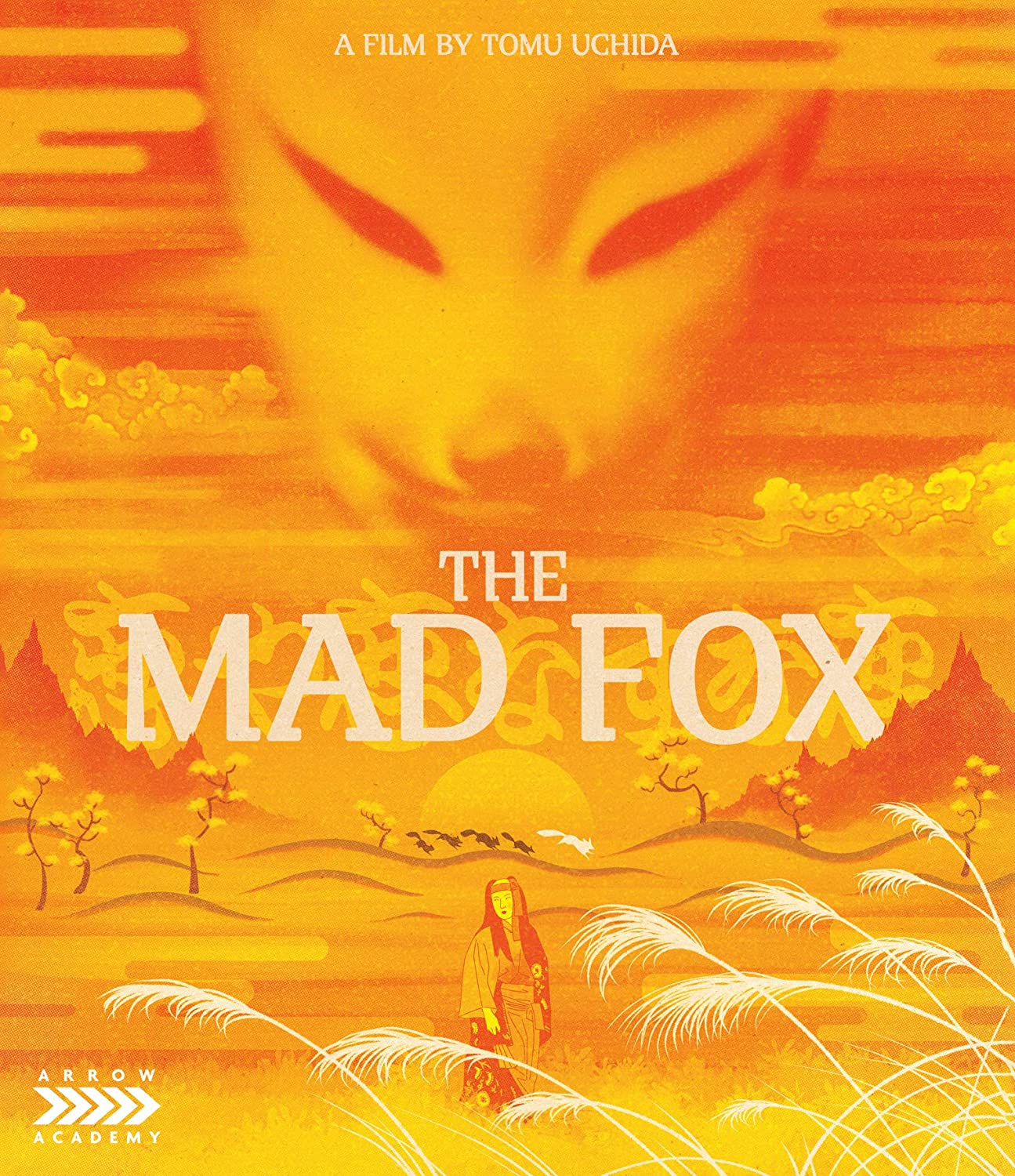 Though he’s nowhere near as well-known in the West, Tomu Uchida is considered in his native Japan to be a filmmaker on par with such contemporaries as Yasujirō Ozu and Kenji Mizoguchi. One of the reasons for this seems to be a fundamental changeability both in his choice of thematic material and cinematic style. Consequently, his output ranges from the monochrome naturalism of 1955’s Bloody Spear at Mount Fuji to the searing Fujicolor panoramas and overtly theatrical tableaux of 1962’s The Mad Fox.

Based on a 17th-century play, in turn based on the folk tales and legends of medieval Japan, The Mad Fox draws on the idiosyncratic aesthetics of scroll paintings and Kabuki theater to convey its strange saga of imperial court intrigue. The film opens with a protracted lateral pan along an unraveling scroll, whose illustrations handily lay out the requisite backstory. At the end of this nearly five-minute shot, the image subtly shifts from the painted image of an erupting Mount Fuji to a live studio set flooded with unnatural crimson light. It’s the first in the film’s frequent shifts in register—from constructed sets to real locations, period-exact costumes to flagrantly histrionic masks, standard dialogue to bizarre internal monologues sung by an off-screen narrator. These sudden changes serve as Brechtian distancing effects, forcing us to remain keenly aware of the artifice involved in art.

Mount Fuji’s eruption signals chaos in the land. Only court astrologer Kamo no Yasunori (Junya Usami) can be counted on to properly advise the emperor by consulting the fabulous Chinese scroll known as the Golden Crow. Unfortunately, the prevailing disorder extends to Yasunori’s own household, where the rivalry for favor between virtuous Yasuna (Hashizô Ôkawa) and devious Doman (Shinji Amano) leads to a series of betrayals, torture, murder, and Yasuna’s ultimate madness and exile. Uchida’s deliberate pacing and penchant for exquisitely balanced (and decidedly painterly) compositions tend to drain these events of their inherent drama, another technique the director uses to seemingly hold the viewer at a remove.

The expressionistic manner in which Uchida illustrates Yasuna’s fit of madness is visually remarkable. After visiting the graves of those he’s lost, Yasuna wanders into a field of vivid yellow flowers. The scene then subtly shifts to a set: Behind Yasuna there’s a bright yellow curtain, and the stage, complete with artificial flowers, slowly revolves in circles, as the off-screen narrator croons, “Inside is emptiness. Never fall in love.” The tableau changes back to the field as the curtain drops to reveal an expanse of meadow with trees in the distance. It’s as surreal and disorienting a moment as any in Japanese cinema.

Yasuna now enters a landscape of swirling mists and mythological creatures. Where the first half of The Mad Fox could almost pass for your typical jidaigeki period piece, albeit absent all the sword- and spearplay, the latter half resembles films like Onibaba and Kwaidan that revel in the uncanny and the supernatural. Yasuna gets caught up with a clan of fox spirits who can take human shape. The young female, Okon (Michiko Saga), assumes the form of Yasuna’s lost love, Sakaki (Saga again), who had been tortured and killed by Doman. Kon uses her superhuman powers to construct a sort of isolated bubble in the middle of the forest, where she and Yasuna can live and love unimpeded by the outside world.

To emphasize the unnaturalness of this situation, Uchida again shifts to the theatrical register: We first see Yasuna and Okon’s shared hovel as a curtain draws back to reveal the façade of the structure. The surrounding landscape consists of painted flats, and the backdrop is patently two-dimensional. But the real world insists on intruding on their idyll, not out of political expediency, as it happens, but owing to untrammeled desire. Sakaki’s younger twin sister, Kuzunoha (Saga once again)—whom Yasura had earlier, in his delusion, mistaken for her sister—arrives to inform him she’s been pining away in his absence. (Even this doubling and trebling of identities smacks of dramaturgy.) As The Mad Fox winds down to its final shot of a deserted stage, the off-screen narrator again warns us of what can happen to those who, to quote another playwright, have “loved not wisely, but too well.”

Touted as a “brand new restoration by Toei,” The Mad Fox looks excellent overall, despite some technical flaws inherent in the “Toeiscope” widescreen anamorphic format, as writer and curator Jasper Sharp points out in his commentary track. These mostly manifest as edge enhancement and distortion evident at frame’s edge as well as in some of the more prominent close-ups. Colors are bold and richly saturated, especially those overpowering yellows. Clarity of detail really stands out in the brightly hued textures of the medieval costumes. Black levels are deep and uncrushed, while grain is well modulated throughout. The LPCM mono track cleanly conveys the dialogue, as well as gives some decent presence to Chûji Kinoshita’s minimalist score for the shamisen and other traditional instruments.

The main extra supplied by Arrow is another richly detailed commentary track from Japanese film authority Jasper Sharp, who delves deep into the multifaceted historical and cultural contexts of The Mad Fox, identifies the film as a turning point between classical and “modernist” Japanese cinema in its formal experimentation and rejection of a naturalistic mise-en-scène, conveys lots of career information about the cast and crew, and points out numerous connections (both direct and more convoluted) between this film and the works of Kenji Mizoguchi. Also included on the Blu-ray is a theatrical trailer and image gallery.

Making its Blu-ray debut, Tomu Uchida’s film is a highly stylized ode to love and disorder.