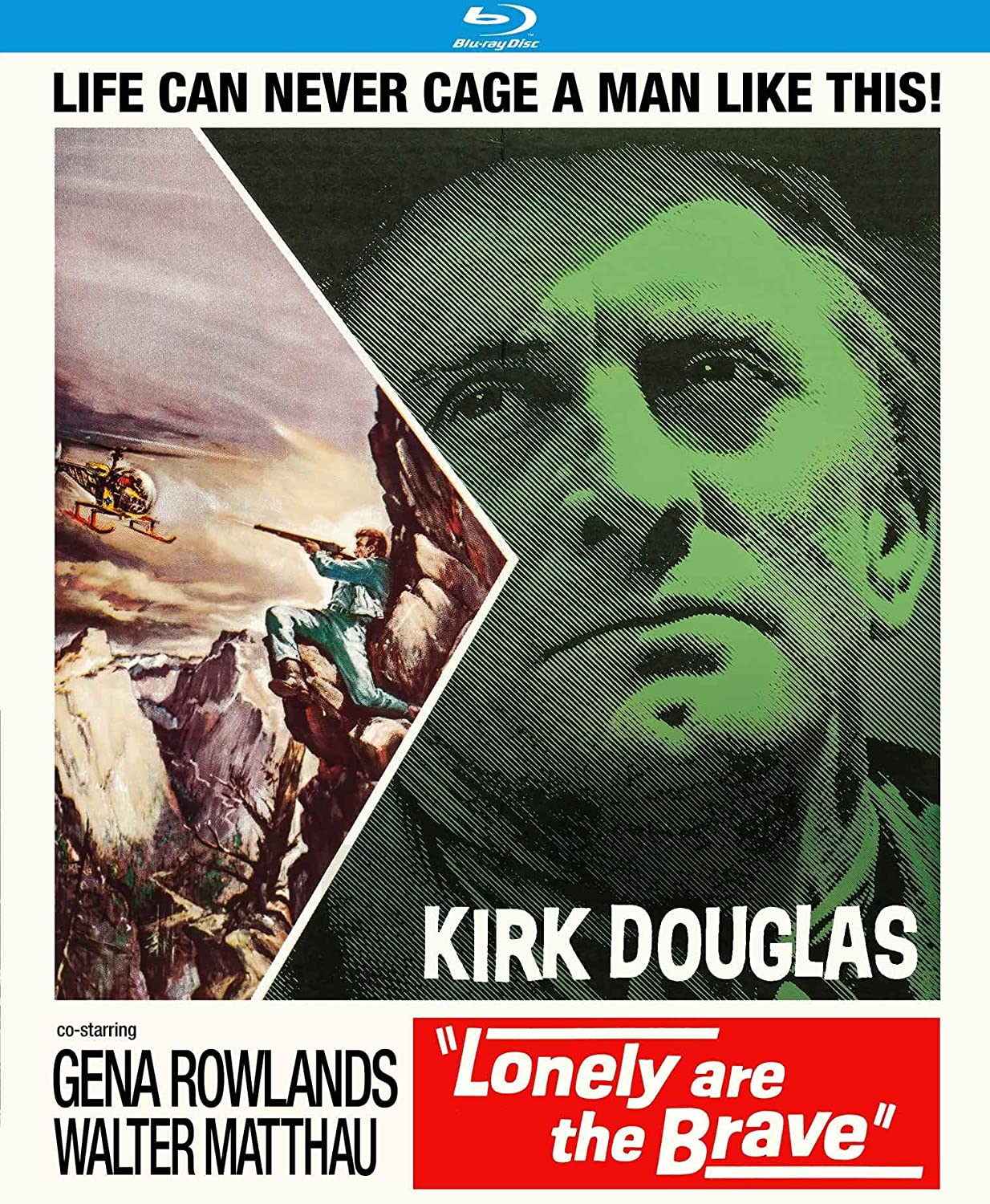 David Miller’s Lonely Are the Brave opens with a shot of a vast desert landscape. A fortysomething cowboy, Jack Burns (Kirk Douglas), is seen lounging and enjoying a cigarette by a small campfire—a moment of peace that’s interrupted by a mysterious rumbling sound whose source is revealed to be three fighter jets soaring overhead. This juxtaposition of the cowboy life with the modern technological world is a jarring one, and by the time Jack mounts his horse and struggles to cross a busy highway, it’s more than clear that this world has little use for men who refuse to trade their horses in for 18-wheelers.

After cutting through a barbed wire fence and crossing the busy streets of Duke City (a thinly disguised Albuquerque), Jack arrives at the home of a woman, Jerry (Gena Rowlands), whose excitement suggests she’s the roaming ranch hand’s wife. But we soon learn that Jerry is the wife of his best friend, Paul (Michael Kane), and that Jack has arrived in town to bust out his buddy—a former cowboy who’s serving time for helping immigrants who’ve just crossed the border from Mexico—from prison.

Despite his antisocial and anti-authority leanings, Jack isn’t an outlaw, but rather a man desperately clinging to an identity and way of life that’s virtually unsustainable in the modern world. And throughout the film, Miller and cinematographer Philip Lathrop take full advantage of the black-and-white Cinemascope frame to highlight Jack’s isolation and feelings of entrapment. From fences to busy streets to prison bars, the filmmakers see the modern world as a series of barriers to men like Jack, who deliberately gets himself arrested so that he can help Paul escape. At one point in the film, Jerry pleadingly tells Jack, “The world that you and Paul live in doesn’t exist…it’s got real borders and real fences, real laws and real trouble.” But the man isn’t interested in change, only the gratification that comes with life off the grid.

Even the local bar offers Jack no peace, as it’s there that a one-armed man picks a fight with him. This confrontation erupts into an exhilarating fight sequence where nearly everyone in the bar turns on Jack, and though he takes this all in stride, it underlines just how unwanted his presence is in civilized society. Paul, too, ultimately rejects Jack, refusing to escape with him because he’s straightened up and plans to stick around for his wife and child.

In a series of beautiful reverse shots, Jack and Paul, framed on opposite sides of prison bars, commiserate with one another before parting ways, and even though Paul is left on the inside, we get the distinct sense that Jack is re-entering his own sort of prison. These shots are mirrored later after Jack escapes and returns to his natural environment in the film’s second half, when Sheriff Johnson (Walter Matthau), standing in his stuffy office, gazes out to the mountains through a barred window, wondering where the convict cowboy could be.

It’s at this point that Lonely Are the Brave excitingly returns to the business of juxtaposing the old and new. Jack briefly enjoys living off the untouched land, but whether by land or air, Johnson’s pursuit of him is so relentless that the cowboy and his trusty horse Whiskey have to keep moving. Miller repeatedly frames Jack in wide shots, presenting him as being in harmony with the land, while Johnson is shown in mid-shots, looming over it as a dominant, inescapable, annihilating force. Earlier in the film, Jack tells Jerry that he’s a “loner clear down deep to my guts,” understanding that makes him something of a “cripple.” By the end of Lonely Are the Brave, Jack learns the true cost of his condition, one which has long been inevitable, but which arrives in a shocking event that’s as tragic as it is ironic.

The image presentation on Kino’s Blu-ray release of Lonely Are the Brave is absolutely stunning, especially given that the transfer wasn’t sourced from a new digital restoration. Thanks to its wonderful set design and deep focus photography, the film abounds in minute visual details, and the transfer renders every speck of dust, bead of sweat, and mountain rock with remarkable precision. There aren’t many shadows in the film, but the contrast is still quite impressive, exhibiting a wide range of greys that highlight the many contours of the mountainous desert landscape and the nooks and crannies of the actors’ faces. The audio is similarly flawless, with a well-balanced mix that does justice to the film’s score and gives a dynamic range to the natural and technological sounds that pop up in the soundtrack.

The highlight of this Blu-ray is the comprehensive audio commentary by film historians Howard S. Berger and Steve Mitchell. They contextualize Lonely Are the Brave as being of a piece with other late westerns of the early 1960s, such as John Huston’s The Misfits and Sam Peckinpah’s Ride the High Country, while also discussing the various traits that make David Miller’s film an outlier. Much of their conversation covers the film’s aesthetic qualities—particularly Philip Lathrop’s gorgeous black-and-white Scope cinematography and Jerry Goldsmith’s somber score—as well as Kirk Douglas’s performance. There’s also a brief but intriguing segue into the film’s subtle political dimensions, which are especially notable in the film’s changing of the crime which lands the character Paul in jail from dodging the draft, as he did in the source novel, to aiding immigrants who had just crossed the border. The disc also comes with a 20-minute tribute to the film, which includes ample praise from Steven Spielberg, Michael Douglas, and Kirk Douglas, who notes that it’s his favorite film that he’s ever been in. The package is rounded out with a short featurette on Goldsmith’s score.

Of all the films he worked on, Lonely Are the Brave was Kirk Douglas’s favorite, and this disc’s striking transfer and illuminating extras go a long way toward explaining why.

Queer Debauchery As Waking Dreamscape: Equation to an Unknown