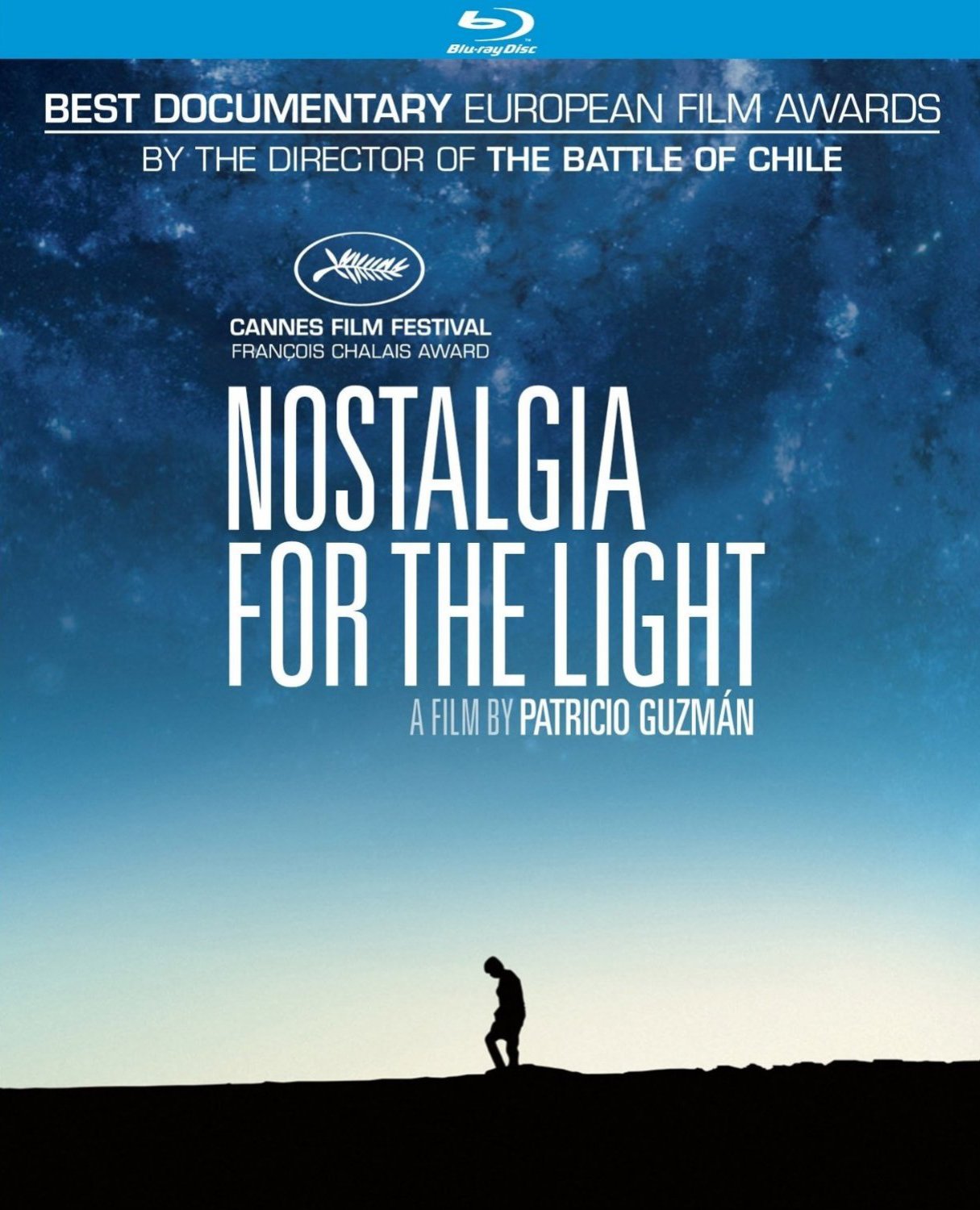 The present moment doesn’t exist in Patricio Guzmán’s bewitching documentary Nostalgia for the Light—only the ethereal flickering of past memories, traumas, and emotions. Here, discovery isn’t a process, but a burst of energy that occurs within a heightened state of remembrance, a subjective headspace often inspired by inanimate objects of the past, like an ancient whale’s bone or a gold transistor radio. These are primers for Guzmán’s examination of his own origins as a filmmaker and human being, his defining passions and thoughts. Yet Nostalgia for the Light is equally consumed by what has been repressed, what’s tragically hidden in plain sight. By intricately mapping personal experiences as layers of a larger national terrain, Guzmán becomes a kind of cinematic cartographer for Chilean history, not to mention a kindred spirit with his many diverse subjects. This connection is most palpable with the legion of astronomers who use gigantic telescopes to scan the translucent horizon high atop the famous Atacama Desert, where in some of the film’s indelible night shots it literally looks like you could reach out and touch the stars.

Nostalgia for the Light opens with a heavenly dance between movement and light. An antique German telescope slowly shifts into position, the ornate parts meticulously turning into place with clockwork precision. Suddenly, the canopy doors open and light begins flooding the space. Bright white slowly gives way to the stunning blackness of space. Guzmán proves himself a master of the dissolve early on, hovering one image over another as if they were symbiotic in nature. A Kubrickian montage of the moon’s craters effortlessly transitions to a sequence set in a sun-drenched home where Guzmán, via voiceover, recalls his love affair with astronomy, along with his childlike naïveté before the days of Pinochet. The warm beams of light wonderfully evoke the hazy afterglow of Guzmán’s shape-shifting memory. Moments later, astronomer Gaspar Calas provides a more structured analysis of what drew Guzmán in as a child, the allure of a field of study that’s “never resolved.”

But celestial bodies and scientific mechanisms aren’t Guzmán’s only interests. Nostalgia for the Light is equally concerned with the lasting effects of the 1973 coup d’etat and the following Pinochet dictatorship, specifically the thousands of bodies still buried underneath the lifeless desert crust that surrounds the scientific facilities where Calas and other scientists chart the heavens. Family members of the “disappeared” roam the arid landscape shoveling dirt, unearthing the bones of their relatives—horrific reminders of Chile’s dark past. Vicky Saaveda and Violeta Berríos are two such women, and Guzmán conveys their brave attempt to gain closure for their loved ones with a sublime sense of poetry. In one extended interview, Saaveda sits on the desert floor with a picture of her murdered brother, the same area where he was buried 30 years previous. Vicky remembers in potent detail the moment she discovered portions of his body in a mass grave, including a calcified foot still in the shoe. In Nostalgia for the Light, both memories of horror and beauty seem frozen in time by the elements.

Intimate confessions by Saaveda and others populate much of Nostalgia for the Light, giving Guzmán’s camera an immediacy that mirrors the volatility of his fluid natural surroundings. Many of the film’s interviewees battle a crippling sense of uncertainty when dealing with their own fragmented mental states, as the pressure of time and circumstance weigh heavily on each victim’s process of remembrance. Sometimes they momentarily shut down because the pain is too much, but Guzmán always gives them the space to recapture a personal realization of hope. Artist and architect Miguel Lawner, an ex-prisoner of the infamous Chacabuco concentration camp, also located in the Atacama, offers a wrenching account of his daily torture under Pinochet’s military regime. His time with Guzmán is possibly the film’s best representation of this organic relationship between memory and environment. To cope with his imprisonment, Lawner made mental maps of each cell, yard, and fence, perfect layouts he would use to communicate experiences through drawings years later. Some of his portraits represent a moment in Chilean history that has been completely erased by the government that only lives through pieces of art like this and the memories of survivors. It’s fitting Guzmán calls Lawner a “transmitter of history.”

As far as endings go, it doesn’t get much more heartbreaking than the story of Valentina Rodríguez, an astronomer and child of disappeared parents who was forced to overcome a debilitating familial guilt that’s hard to imagine by any standard. Guzmán’s feature-length examination of physical and scientific terrain solidifies as something intrinsically human. Valentina’s reflective words evoke both a country’s past demons and potential for the future. It’s fitting then that Guzmán lingers on Valentina holding her brand new baby before dissolving to a collage of faded, sepia-toned photographs of the disappeared, Guzmán cinematically juxtaposing the past, present, and future as an incomplete but historically essential timeline. It’s a complicated roadmap for all Chileans to find peace no matter how terrible their memories.

The real sense of hope running through every striking image of Nostalgia for the Light makes it not only an essential cinematic document, but also a reminder that history lives and dies in the details of experience. Archiving these moments is both a personal and collective act. “I am convinced memory has a gravitational pull,” Guzmán confesses, finalizing his breathtaking examination of the many ways body and mind elementally overlap. This is personal luminescence as national reconciliation, and political cinema as stargazing.

Exquisite. You won’t find a better visual transfer on a Blu-ray this year than the mind-blowing 1080p image Icarus Home Video has given Nostalgia for the Light. Every grain of sand, bit of stardust, and glowing ray of light is perfectly captured in stunning high-definition. The heavens are there for the taking. The surround sound does a nice job of supporting Patricio Guzmán’s astounding visuals, especially the blowing wind of the Atacama Desert that often howls across the frame. Still, an uncompressed soundtrack could have added further audible depth to an already strong sense of time and place.

Five short films directed by Guzmán concerning astronomy, the cosmos, and Chilean history. Each is an extension of Nostalgia for the Light, narrative tentacles reaching out to smaller relevant stories. Chile, a Galaxy of Problems further examines the historical factors that promoted Chile’s national disavowal of the Pinochet years as a form of social progress. Oscar Saa, Technician of the Stars follows a master engineer who’s operated one of the Atacama telescopes for 30 years. Dark energy and aspects of time formulate the core discussion in José Meza, Time Traveler, another intriguing discourse between Guzmán and a professional scientist. In María Teresa and the Brown Dwarf, the famous astronomer discusses her discovery of the first unborn star and the importance of a finely tuned eye for colors, textures, and shapes. Finally, Astronomers from my Neighborhood features interviews with a group of astronomers calling themselves “El Telescoperos” who build telescopes from scratch. Their passion for these devices can be felt in each elaborate breakdown of the homemade parts and mechanisms.

Nostalgia for the Light sees remembrance as political and poetic act, and something elementally human.

Review: Joel and Ethan Coen’s O Brother, Where Art Thou? on Touchstone Blu-ray