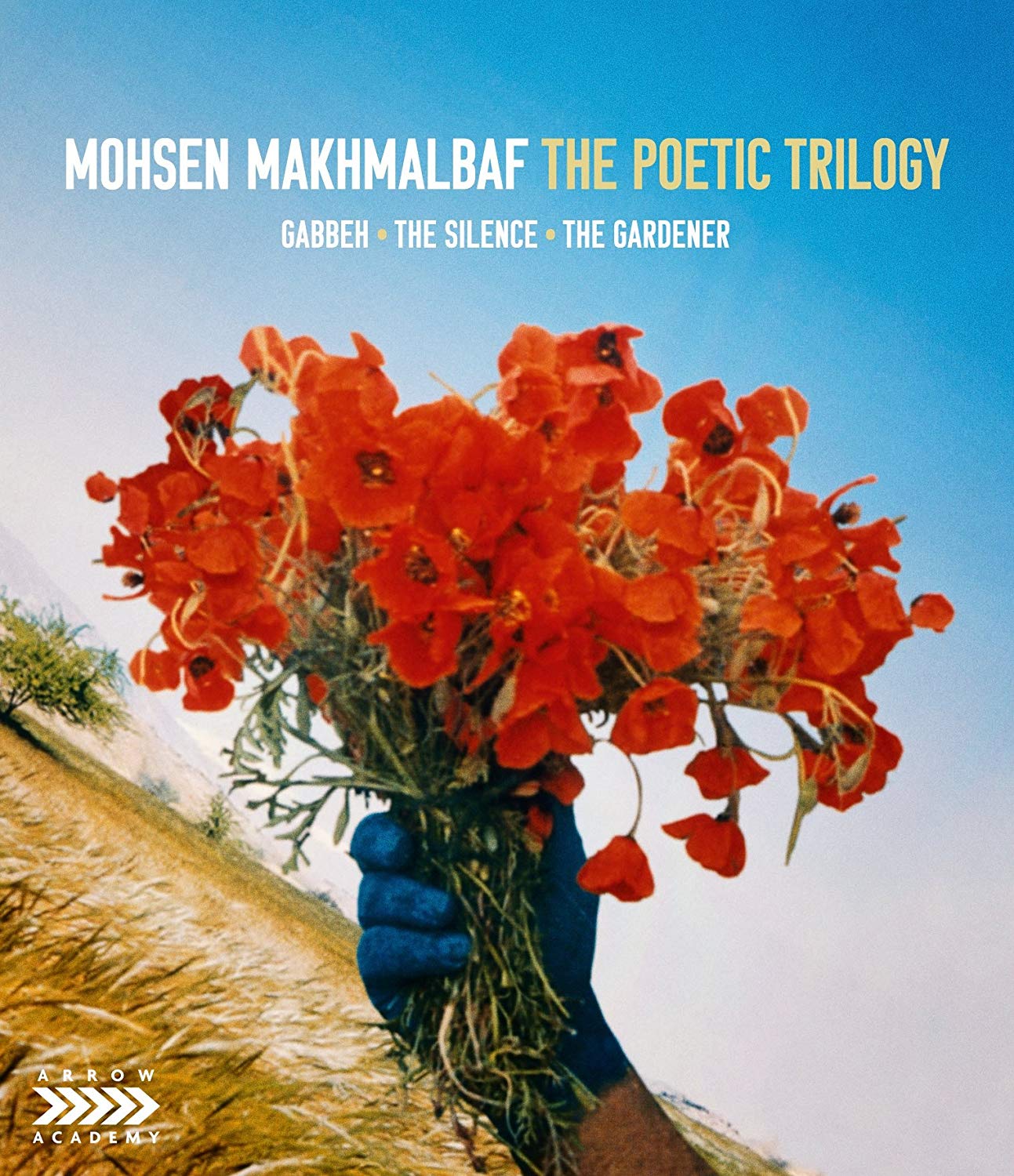 The pain that lingers beneath the surface of Mohsen Makhmalbaf’s “Poetic Trilogy” emanates from a careful melding of the cinematic image and the sociopolitical realities of daily life in Iran. Even something like the particular shade of sky blue that recurs in women’s clothing and textiles throughout 1996’s Gabbeh takes on greater significance if one knows that women at the time were prohibited from wearing or adorning themselves with such colors under the mandates of an oppressive regime. In this way, these films often convey a political perspective without dipping into explicit rhetoric that indicates them as speaking to, or about, a current state of affairs in Iran.

Nor does the “poetic” mean precisely the same thing in each film. The striking colors and compositions of Gabbeh stand in stark contrast to the low-grade digital images of 2012’s The Gardener, which explores religious devotion through the framework of a DIY, reflexive documentary. And 1998’s The Silence finds its own poetry in music and sound. Makhmalbaf conceives such remarkably distinct approaches to his own artistry, in fact, that the image itself belies a singular maker. These films resonate most as an experimental triptych testifying to the perseverance of its characters, whose circumstances oscillate between the stuff of myth and the idiosyncrasies of everyday life.

Gabbeh is the film in this trilogy that’s most formally aligned with what could be called modernist art cinema. The film’s title refers to both a type of Persian carpet and to a young woman, Gabbeh (Shaghayeh Djodat), who serves as the anchor for numerous subplots involving members of her family and her local community. Makhmalbaf focuses less on conventional narrative progression and conflict than on how Gabbeh’s outpouring of emotion through tears lends her a humanity that’s denied to her in everyday Iran. Shots of thread being cut, of carpets floating underneath water, and of flowers being plucked into real life directly out of paintings link art to life, suggesting artistry, whether of filmmaking or rugmaking, as a remedy for intolerance.

As Makhmalbaf lingers on the process of crafting textiles, the film brings to mind the ongoing debate in film theory over whether filmmaking should be understood as a craft or an art form. As conveyed in Gabbeh, craftsmanship becomes inseparable from artistry, so that Makhmalbaf’s resolving of his film’s plot also produces a reckoning with how contact with color through touch and sight might be both its own form of resistance to political oppression and an affirmation of the human condition.

And if Gabbeh’s implicit linking of color and politics recalls Sergei Parajanov’s The Color of Pomegranates, then The Silence winks at such a reading by opening on a marketplace were pomegranates are sold. Though The Silence opts for a less ornamental color scheme than that of Gabbeh, it translates much splendor to the aural qualities on the soundtrack, as Khorshid (Tahmineh Normatova), a young blind boy, becomes obsessed with the transporting qualities of classical music. Like Abbas Kiarostami’s Where Is My Friend’s House?, the film sets a child’s pursuit of knowledge against a society that prohibits personal and artistic expression, so that Khorshid’s imagined conduction of an orchestra takes on multiple dimensions as a fantasy.

A documentary set within the Baha’i gardens in Haifa, Israel, The Gardener announces itself as a political work from the first shot, as Makhmalbaf and his son, Maysam, each operate cameras as they traverse the grounds. The film’s reflexive component is as overt as that of the credits sequence in Godard’s Contempt, with cameras traveling toward the (off-screen) camera shooting the film at hand. As such, The Gardener is as much compelled by the question of how filmmaking creates and shapes meaning as it is by the perspectives of its subjects, all of whom have devoted their life to religion in some capacity. Unfortunately, the poetic dimensions here feel sophomoric and overworked, with sequences of performance art and cringe-worthy poetry being recited (mostly in English) directly into the camera with utmost sincerity. Unlike the prior films in the trilogy, The Gardener gets stranded between theorizing its ideas and finding a perceptive, less literal means to put them into practice.

The 2K scans of Gabbeh and The Silence showcase magnificent transfer work by Arrow Films. Colors, particularly reds and blues, practically leap from the screen throughout Gabbeh. There are no problems with fading or color balance, as each shade appears saturated in accordance with the 35mm internegative that Arrow used during the transfer process. The Silence boasts a sharp image, though some minor scratches and other damage are briefly glimpsed throughout the running time of both this film and Gabbeth. The Gardener is easily the least notable of the three image transfers, not least because the low-grade DV simply looks bad in comparison to the other films. Nevertheless, there’s no indication that the original image has been compromised on this release, as focus and color is consistent throughout. The soundtracks, variously in mono (Gabbeh, The Silence) and stereo (The Gardener), all project clean and distortion-free audio.

The highlight of this two-disc set’s extras is an hour-long interview with Mohsen Makhmalbaf conducted by critic Jonathan Romney, in which the filmmaker elaborates on the trajectory of his career beginning in the 1990s. He says that the first two films in the “Poetic Trilogy” are like his children and contextualizes them within the censorship laws of the time. Makhmalbaf also gets personal, detailing when he was physically tortured as a young man and how his grandmother believed that anyone who practiced the arts automatically went to hell. Despite the severity of the tropic of discussion, Makhmalbaf proves jovial and even lighthearted as he discusses what each of the films means to him. A commentary on Gabbeh by critic Godfrey Cheshire dissects the film’s political undercurrent and also weighs its realist photography against the usage of color as fantastical element. Also included is a brief archival interview with Makhmalbaf on The Silence, the original trailers for all three films, and a stills and collections gallery.

Arrow Films brings three of Mohsen Makhmalbaf’s films to vivid life with The Poetic Trilogy, in what will hopefully be the first of several high-definition releases in North America of the Iranian master’s work.