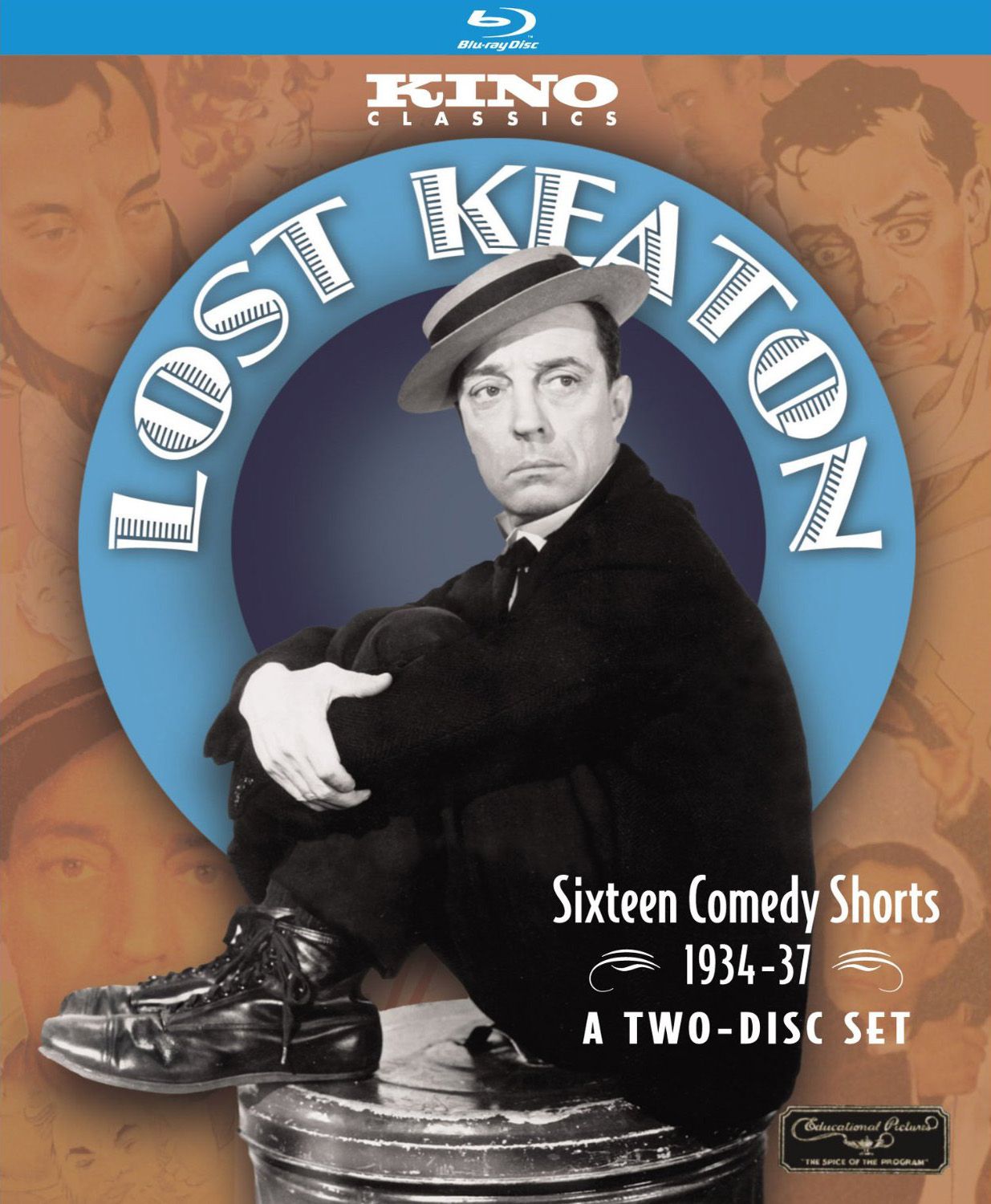 Kino Lorber’s Lost Keaton collects 16 two-reel talkies that Buster Keaton made for Educational Pictures between 1934 and 1937. Though none reach the heights of antic artistry displayed in his silent-era output, there are at least two minor classics to be unearthed in this collection (my money’s on One Run Elmer and Grand Slam Opera), and even the lesser films are enlivened now and again by a real rib-tickler. Watching the films today provides a study in contrasts. On the one hand, Keaton’s heyday has clearly passed. Acrimonious divorce and drink have taken their pitiless toll. Sometimes it isn’t entirely clear whether all the hemming and hawing is even intentional. Not to mention, Keaton seems a little long in the tooth to be playing a succession of wet-behind-the-ears tyros. On the other hand, Keaton’s extraordinary dexterity and aptitude for physical comedy remain indefatigable. And, fortuitously for his audience, Keaton retains the skeleton key to slapstick success: Executing the most absurd actions without batting a bulging eye, Keaton makes you forget all about the rehearsals and flubbed takes. As the best films in this set testify, Keaton offers up artifice in the purest, most natural way possible.

By the mid-1930s, Educational Pictures had long moved beyond their original pedagogical purposes, cranking out low-rent comedy shorts by the dozens. The studio optimistically labeled their product “the spice of the program” (the Aladdin’s lamp logo, I think, indicates the wishful thinking), but the films were of such dubious quality that contemporary wags dubbed them “the space on the program.” That’s a fitting description for the slackest films in the Lost Keaton collection. After all, material conditions were scant: Budgeted at $20,000 apiece, with $5,000 going toward Keaton’s salary, these films were usually shot in three to five days, often more than one at a time, the workday stretching into the wee hours of the morning. So it’s all the more remarkable when Keaton and his collaborators can transcend these limitations or (as is more often the case) use them to their advantage.

Throughout his Educational pictures, Keaton plays variations on the same character. Like as not named Elmer (a rube name if ever there was one), Keaton’s persona epitomizes ineptitude and incompetence. Whether big-city firefighter or ghost-town sheriff, Elmer is a hopeless, hapless clod, vexed by the very tools of his trade. (Take Blue Blazes, where he has a nasty habit of falling off the back of the fire engine.) Until, that is, Elmer invariably manages an 11th-hour turnaround, winning the girl of his dreams by suddenly mastering the things that flummoxed him, and leading to that textbook comic resolution: a wedding. The classic example here is Allez Oop, with Elmer’s bungled backyard imitation of a high-flying trapeze act standing as its central comic set piece. But when his gal’s threatened, Elmer swings into death-defying action.

This matrimonial status quo is rarely threatened or even seriously qualified: One Run Elmer, for example, ends with Elmer on the run from his paramour, bolting into the vast desert vistas, though this seemingly spontaneous variation lacks any coherent rationale. Sometimes the exceedingly perfunctory nature of the nuptials (more than one short concludes with Elmer’s intended literally shoved into frame at the last second) points up the ridiculousness of the convention, but it’s doubtful whether subversion was ever a factor—or even a consideration. Blue Blazes is atypical in this regard: Neither of the two girls Elmer attempts to rescue from the blaze is presented as a potential flame (in fact, there isn’t one). Given his oafish nature, it’s not exactly surprising that Elmer winds up falling out a window as the chief tries to pin a medal on him. The final shot shows him stretched out on a canopy that’s broken his fall, neither here nor there, suspended in space as well as storyline.

A blurb on the back of the Blu-ray case claims “These discs were mastered in HD from 35mm and fine grain masters from Keaton’s personal collection and other archival sources by Raymond Rohauer. Some films exist in less-than-perfect condition, which is not atypical for low-budget ‘orphan’ films such as these.” Consider that fair warning. Damage remains abundant: scratches, flecks, and variable brightness on the visual side; pops, hisses, crackles, and other impediments on the audio. In the case of Mixed Magic, absent frames result in some unintended Godardian jump cuts. Dialogue is usually decipherable; nevertheless, some kind of subtitling (even if only SDH) would have been nice. Overall, barring costly restorative overhauls, these neglected films look and sound as good as they likely ever will.

Liner notes by David Macleod, author of The Sound of Buster Keaton, are the highlight of the rather slender supplements supplied by Kino. Macleod’s film-by-film rundown is packed with informative tidbits ranging from the sources of recycled gags to the careers of collaborators and co-stars. The choicest nugget: Lovely Lona Andre, who co-stars with Keaton in three of these Educational shorts, a scant few years later appeared in exploitation fare like Race Suicide and the titillatingly titled Slaves in Bondage. “Why They Call Him Buster” provides less than two minutes of pratfalls and stunts with nothing else in the way of context. Last but certainly not least, full-color posters for The Timid Young Man and Allez Oop are reproduced on the flipside of the cover.

Lost Keaton has found a home on Blu-ray courtesy of Kino Lorber.