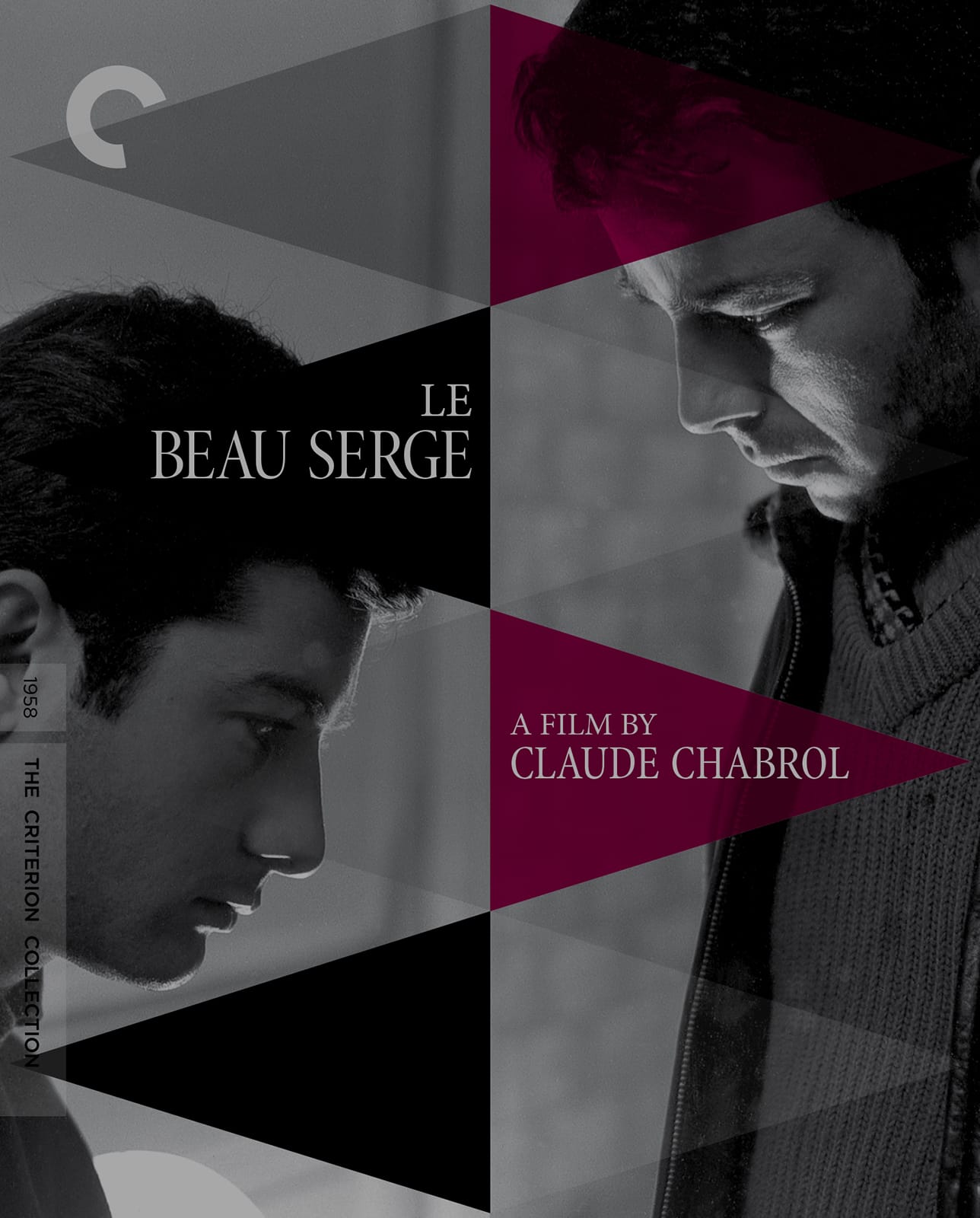 The stalker inside Claude Chabrol is scarily evident even from the very first shot of his feature film debut, 1958’s Le Beau Serge. The film begins on a quiet country road with the only discernable sounds of a bubbling brook filling the space, a cinematic postcard most directors would find peaceful. But in Chabrol’s young hands, this serenity is a façade for looming menace. The roar of an engine destroys the quiet, and as a large bus crosses the frame, Chabrol cuts into the vehicle’s cabin, as if the passing momentum has swept up the image itself. The smash cut allows Chabrol’s camera to function as a silent hitchhiker, jumping from one perspective to the next quite seamlessly. Once on the bus, Chabrol zeroes in on a spectacle-wearing and sickly man named François (Jean-Claude Brialy) returning to his hometown of Sardent for a lengthy respite after spending years away. From this opening montage, it’s clear watching and waiting will be integral motifs throughout Le Beau Serge, a film obsessed with the lurking judgments and devastating assumptions shared between social classes.

Immediately upon arrival, François encounters the living ghosts of his past, most notably a childhood friend named Serge (Gérard Blain), now an unhappy womanizing drunk with a pregnant wife. François and Serge attempt to reconnect, sharing old memories and laughs while talking about recent developments in each other’s lives. Their friendship has been splintered by too much time apart, and disjointed conversations about shared moments turns sour very quickly. The core conflict between the two men is experiential in nature. François, now an educated city slicker, has an entitled air to his walk, while Serge is a deadbeat bumpkin stuck in a disintegrating downward slide. First excited about his friend’s reemergence, Serge quickly begins to resent François for his superior attitude, and their relationship fractures as Chabrol’s kino-eye grows more constraining. To make matters worse, François thinks he can help Serge by simply giving him advice about happiness and self-fulfillment, but their disconnection is far bigger than either can imagine. With Le Beau Serge, Chabrol captures the lengthy moment in time when the schism between both friends grows too great to traverse.

Like Chabrol’s suffocating mise-en-scène, made up of mostly barren landscapes and interiors, both men turn into stalkers of perspective, each seeking to recapture control over an increasingly chaotic reunion. The passive-aggressive digs they shoot at each other have a poisonous quality, infecting Serge’s innocent wife Yvonne (Michele Meritz) and her sleazy sister, Marie (Bernadette Lafont). Resentment flows between this foursome as easily as the wine Serge drinks on a daily basis, and nearly every conversation feels as if it could turn south at a moment’s notice. In one especially awkward sequence inside her small abode, Marie tells François, “You observe us as if we were insects.” Later, Serge makes fun of his meek friend by saying, “Poor François. Always eager to do a good deed.” Chabrol lingers on moments when loyalties permanently shift; highlighting the fact François often misdiagnoses the verbal daggers being thrown his way.

Even more unnerving is François’s elitist and hypocritical morality toward the economic and ideological challenges the townspeople face on a daily basis. Not only does François try to convince Serge to leave Yvonne, as if the couple’s tumult was her fault, he later admonishes the town priest for not being helping the town find rejuvenation and redemption via religion. Unsurprisingly, François begins to see himself as a savior, thinking he can save Serge, Yvonne, and Marie from self-destruction by sharing the same space. “I think they need me, I think they need an example,” François confesses, proving that he’s even more of a false prophet than the local institutions unable to alleviate the town’s stagnation. The dichotomy between François’s selfish delusions and Serge’s debilitating actions reveal Le Beau Serge as a brutal examination of class divisions that produce lasting social consequences.

Chabrol ends Le Beau Serge by focusing on the continuous futility of François’s existence within Serge and his family’s broken life. When Yvonne suddenly goes into labor one wintry night and cries out for her husband, François ventures into the darkness to find his absent friend, thinking this might make up for all the torment his presence has caused. After an exhausting sequence in which François drags Serge through the snow, the two arrive just in time for the baby’s birth. But instead of thanks and congratulations, Serge wakes up from his drunken stupor and begins laughing maniacally in François’s face, one final reminder that expectations are almost never fulfilled when they come from such a delusional place. Chabrol’s mesmerizing final shot reveals one honest expression in a sea of emotional falsehoods: the relentless screams of Serge’s newborn baby off-screen. But no one seems to hear.

Le Beau Serge is presented in a fine 1080p transfer by Criterion that accentuates the sharp contrasts in shadows inherent to many of the film’s finest moments, like François’s long ominous trek through the snow at the end of the story. The image clarity allows Chabrol’s compositional details a newfound importance, especially in one important sequence in a massive graveyard. The black levels are all nicely balanced, creating depth within the night sequences that find characters looking from well-lit interiors into pitch-black exteriors. The monaural soundtrack is adequately balanced at best, but a dancehall scene late in the film is especially good at illuminating the small bits of background dialogue and sound effects that compete with the main melodrama between Serge and François’s in the center of the space.

Recorded specifically for this Blu-ray release, author Guy Austin’s audio commentary is straightforward and informational, as if the writer were reading from his own book on Chabrol. Austin’s dry and monotone tenor gets tiresome after a while, which is unfortunate given that the film is so fully alive. “Claude Chabrol: Mon Premier Film” is a 51-minute documentary by Francis Girod that merges interviews with Chabrol, actor Jean-Claude Braily, and other key crew members, all discussing the importance of Sardent to each of their lives and careers. Chabrol felt an especially close connection with the small town because both of his parents were from the region. “Being back here really moves me,” says Chabrol in a 10-minute excerpt from a 1969 television episode of L’invite du Dimnache during which the director returns to Sardent to muse about Le Beau Serge. While the quality of the black-and-white program is rough, the short featurette shows why Chabrol had such an affinity for this spot on the map. Also included are the film’s trailer and a booklet with a very short but effective essay by film critic Terrence Rafferty.

Claude Chabrol’s intoxicating Le Beau Serge, a condemnation of delusions on both sides of the social spectrum, gets a necessary Blu-ray release from the Criterion Collection.