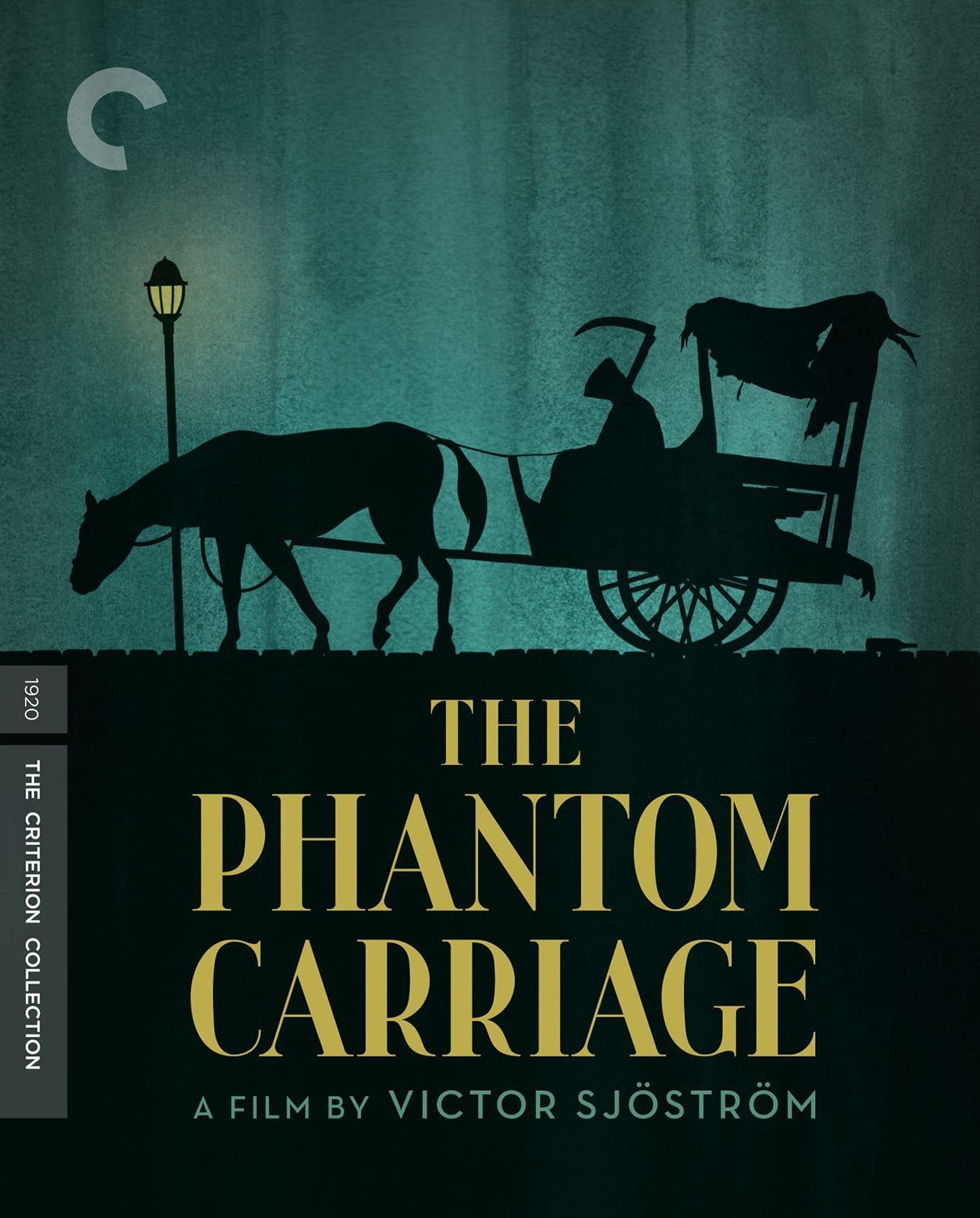 Victor Sjöström’s watershed silent film The Phantom Carriage isn’t quite an explicit deconstruction of alcoholism. The protagonist, David Holm (also Sjöström), is a consummate drunk, to be sure, but narratively speaking he’s a recidivist self-destroyer who needs saving by the formative witnessing and reenacting of altruism. Set around the turn of the century in a Swedish slum, the film’s regard for Holm’s manic, consumptive sauce-sucking as the apex of pathetic degradation might furthermore be its most cornball-Dickensian device. Stricken by popular vice, Holm is the everyman whose everyday-ness is pathologized and ugly: His metamorphosis can therefore be understood allegorically, as could that of the industrialist miser Ebenezer Scrooge.

For all the film’s petty social optimism toward persistent acts of kindness, however, it remains an accurate portrait of addiction, and the festering microcosms that its adherents assemble around themselves. The story and mise-en-scène ultimately inhabit Holm’s experience so precisely that they even repeat his mistakes, particularly in the marginalization of his young and generically affected children. Just as the drunk exists alone with his elixir and his stupor, Holm is often photographed in hauntingly innocuous isolation, a continuum of slurred, unhindered id-exuberance. And by ignoring Holm’s filial obligations almost entirely, Sjöström harrowingly (and perhaps inadvertently) renders the most intimidating aspect of being reared by an alcoholic guardian; with enough exposure, the progeny are shudderingly able to see the drunk the way that he sees himself.

The Phantom Carriage abounds with histrionic confrontations, not the least weepy of which occur between the obstreperous Holm and his burdened, prematurely aged wife, Anna (Hilda Borgström, appearing like the Nordic version of what Lillian Gish would become two decades later). But depictions of Holm’s unspeakably intimate relationship with alcohol are queasily casual, almost deadened. When he carouses with his buddies at the movie’s start, the proceedings seem somewhat pathetic for a New Year’s Eve party, but frightfully ordinary. (“This is the behavior that condemns souls?” we ask ourselves.) Sjöström frames his own performance in tight medium shots and close-ups that favor hand gestures and subtle blocking techniques; this inch of space allows his theatrical intoxication to assume both comic and tragic subtexts when needed. Throughout the story there are few punch-ins of drool-y, plastered faces, or immutably riled ones, that might thrust the volatility of Holm’s abusiveness on us.

The drunk only perceives his self-abuse, and even that is understood from the comfortable distance of beer- and spirit-abetted numbness. Likewise, Holm’s condition only seems like an illness when he’s fighting about it with other people. Elsewhere, it’s bizarrely perfunctory, an assembly of eye-line shots and iris wipes that humorously allow for one more sip of poison before fading to black. Toward the end of the first act Holm is even accidentally killed by his inebriated friends in a spontaneous argument that turns to fisticuffs, an event the film appears to shrug off with stagnant, undramatic staging; it’s just another plot point, another day in the life—or in this case, death—of a loveable reprobate. (Drunks tend to flit between intense self-loathing and blithe assumptions of the general lovability of their wasted alter egos.) In another sequence, Holm irascibly rejects the naïve tenderness of a Salvation Army sister by tearing out the buttons and pockets she’s mended on his coat. The scene’s devastation, however, is complicated by Holm’s amusement at his actions. The concatenation of shocked reaction cuts and whiskered, unconcerned guffaws that follow are an uncannily unsettling fusion of Holm’s self-oriented perspective and whispers of the wounds that surround him: The interaction is presented as comic relief that is acutely aware of its own emotional unsavoryness.

The bulk of the running time is devoted to a discursive series of flashbacks whereby Holm’s spirit tours his checkered past with an Oedipal grim reaper, Georges (Tore Svennberg), a friend and enabler who died at the stroke of midnight the previous New Year’s Day and was thus doomed to drive the titular vehicle for 12 months. Holm is next in line for this auspicious position, so Georges’s illumination of the error of his protégé’s ways provides the film’s humanitarian thrust with a cosmic, supernatural metaphor: The ghostly horse and buggy “redeems” damned souls in all senses of the term. But this spectral device, paired with the need to sustainably represent drunkenness without stooping to hallucinogenic havering, inspired a number of technical and formal cinematic achievements that feel surprisingly human. The elliptical nature of the storytelling—with its Russian nesting doll-like narratives that stop short at the unopenable germ of Holm’s despair—and the deceptively functional edits mimic the cadence of desolate, late-night bar talk. And while the double-exposed image of the carriage itself, along with the ghosts of Holm and Georges, occasionally becomes gimmicky (one can feel the nickelodeon thrills when it drives out from a shoreline onto the ocean), overall Sjöström utilizes its intangibility to purport the addict’s need to confront his past and converse with himself in order to recover.

In the movie’s most classically tragic scene, Holm’s brother (Einar Axelsson) is revealed as the heir of his sibling’s disease, just as Holm was Georges’s dauphin. Before completing a prison sentence for disorderly conduct, Holm is ushered into a tiny cell by a chaplain hoping to appeal to his sense of family obligation, and confronted with his brother’s own impending incarceration for murder while under the influence. Sjöström cuts between his own flaring face, seized with the panic of having forgotten a loved one’s well-being, and the lanky, twitching brother, miserably sequestered in the corner. The distance at which Holm is “touched” by this encounter, however, proves unsustainable as a deterrent, as is the experience of his spouse’s intimidation toward him. (Later, he furiously chops through a locked door with an ax to bridge the gap left behind by that fear; when he finds his children blubbering and his wife fainted on the other side, his wrath dissolves to confusion.)

The addict’s realization that he is ruining lives does not readily inspire detoxification; to the drunk, all of mankind is streaked with purple stains that existed long before the downing of his fatal pint. The truth purported by The Phantom Carriage’s climax is that lives must hang in the balance; the drunk’s call-to-rehabilitation then becomes centered not around the harm he can halt, but the heroism he can exact—and even then it’s not a foolproof solution, a realism to which the film understandably doesn’t aspire. Holm’s salvation is, disturbingly, assured only when his wife and children intend to rob themselves not only away from Holm, but also away from their own right to continue seeking happiness. The arrogance of drunks is such that they will often only commit to helping themselves when they are convinced that their abstinence will save the world. Holm’s sobriety is literally the gift of life.

Watching nearly all earlier releases of The Phantom Carriage requires squinting through decay to discern faces, with the nuance of Victor Sjöström’s tinting and multiple exposure techniques lost entirely. Criterion’s 1080p transfer, though still a mite scratchy, restores the film to likely the closest one can get to its initial directorial vision, with all of what made it such an unprecedented feat largely intact. Sjöström’s night-for-night shooting, paired with the moving daguerreotype-like quality of the antiquarian images, provides an eeriness even in scenes without any apparitions. The two scores (one orchestral and one modern) are mixed for maximum unsettlement, and are actually quite similarly textural. (The strings mimic the grinding crawl of the carriage wheels in the former, where musique concrete noises approximate it in the latter.) The plaintive harmonium chords in the non-experimental soundtrack seem to symphonicize Holm’s plight with regional specificity.

That the two notable extras here connect Sjöström to Ingmar Bergman, within the context of both influence and their collaborative relationship, seems strangely to suggest that the film cannot stand outside of that Scandinavian titan’s narrative. Of the two, the interview with Bergman is most rewarding; a ritualistic watcher of The Phantom Carriage, Bergman reads the movie’s “sculpted close-ups” and groundbreakingly emotive mise-en-scène with comments both biographically significant and fascinatingly intuitive. Peter Cowie mostly elucidates the superficial links between the two directors (e.g., supernatural themes and long takes), while Casper Tybjerg’s curious commentary is a hybrid of shot-for-shot exegesis and historical context. There’s also a more rigorous thematic analysis by Paul Mayersberg in the booklet.

“Don’t get killed on New Year’s Eve” and “give your special effects narrative agency” are among the crucial lessons to be learned from this essential Blu-ray.