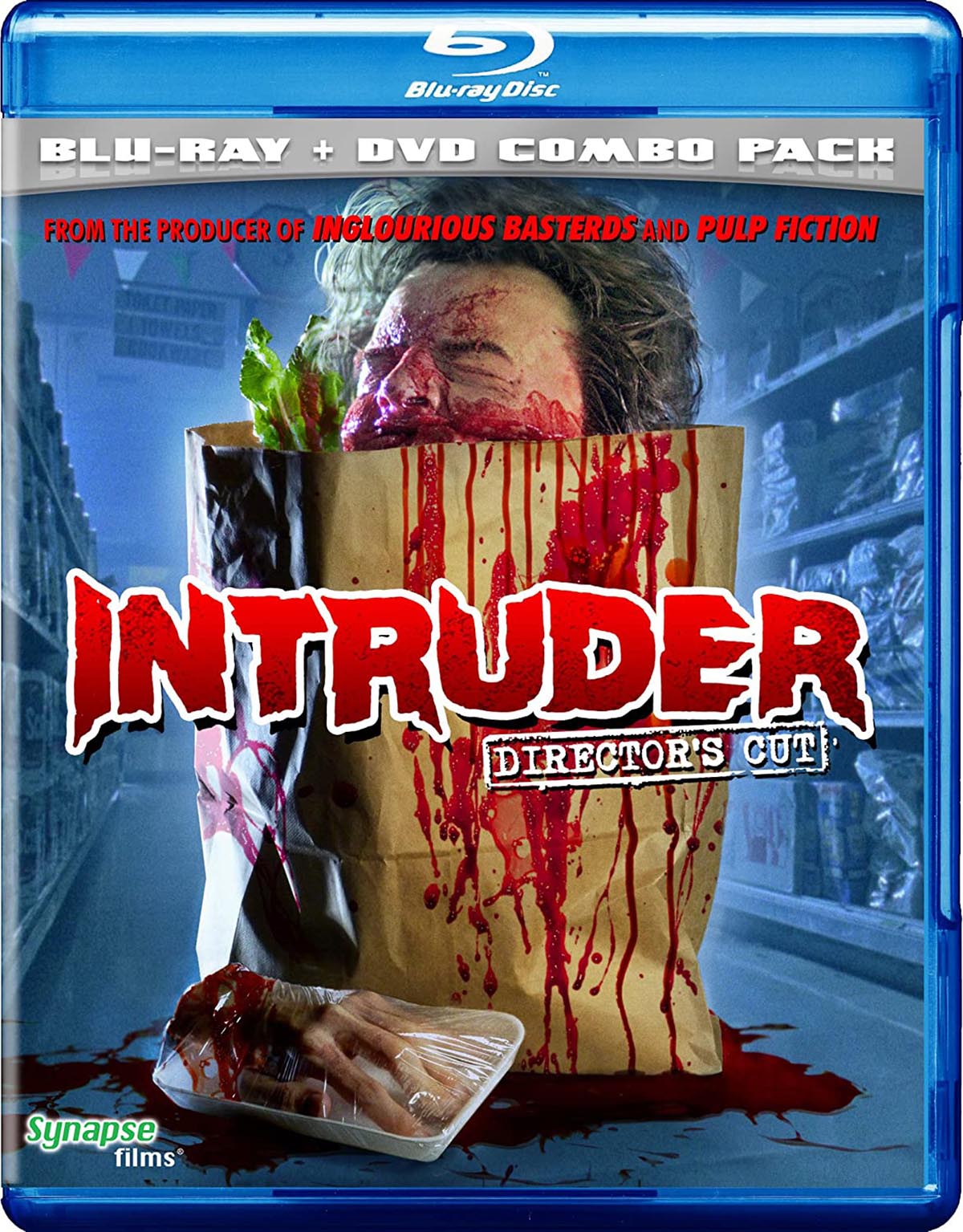 By 1989, when writer-director Scott Spiegel’s excellent Intruder was unceremoniously dumped onto video-store shelves in an eviscerated R-rated version, the slasher-film cycle was, if not altogether belly-up, most assuredly on its last leg. Tent-pole franchises like Friday the 13th and A Nightmare on Elm Street had degenerated into ludicrous caricature, while the initial inundation of imitators—all sorts of holiday-themed massacres and summer-camp carnage—had thinned to a fitful trickle. As cycles wane, they veer into self-mockery and pastiche. Lou Abbott and Bud Costello, for instance, spent the ‘40s trying to get to first base with Universal monsters that had terrorized audiences in the early ‘30s, and in the late 1980s films like Evil Dead 2 and Re-Animator brokered a similar détente between horror and comedy. Spiegel co-wrote Evil Dead 2 with high school chum Sam Raimi, and Raimi dutifully returned the favor by taking a turn in front of the camera as Randy the butcher in Intruder, a wildly imaginative, visually rambunctious film with a penetrating sense of humor that mercifully never devolves into self-parody.

Spiegel and Raimi clearly share certain affinities for extreme (and extremely distorted) camera angles and movements. Over the course of Intruder, DP Fernando Arguelles’s camera occupies a plethora of improbable POV shots, peering up at characters from wastebaskets and telephone dials, gazing dispassionately at them through milk crates and shopping carts, even emulating the feckless turning of a locked doorknob. Arguelles makes the most of Intruder’s cavernous main location and delineates each of its smaller, claustrophobic subspaces by throwing around ominous shadows (those meat hooks count as literal foreshadowing) and chopping up beams of light into noirish shafts and latticework.

Intruder divides neatly into your typical three-act structure, which is just as well, since narrative innovation isn’t the film’s strong suit, that being consistently novel shot compositions and visual gags. The first half hour introduces the disgruntled employees of the Walnut Lake Market (10 little retail Indians, so to speak) as they prepare for another thankless overnight shift spent taking inventory and restocking shelves. Adding insult to injury, boss man Danny (Eugene Glazer) informs them they’ll soon be out of a job. He and partner Bill (Danny Hicks) plan to sell out to the city. Things go from bad to worse when Craig (David Byrnes), the crazed ex-boyfriend of cashier Jennifer (Elizabeth Cox) turns up, fresh from the pokey and looking to rekindle the romance. Craig, at first glance, would seem to be the eponymous intruder, what with his knack for popping up where least expected, but he’s only the first of Intruder’s many red herrings. There’s a hilarious pan-and-reverse that first shows Craig haunting the background of the frame, Michael Myers-like, then shows him gone, as Jennifer wheels around in alarm, only to discover a magazine cover with Sting staring fiercely back at her.

The second act witnesses an unseen killer gruesomely dispatching one employee after the next, in increasingly outrageous and graphic fashion, via trash compactor, meat hook (naturally), and band saw. This was the first official outing for FX supergroup KNB (Robert Kurtzman, Greg Nicotero, Howard Berger), and they certainly weren’t sparing with the viscera, or the copious blood spattering and pooling under seemingly every door in the building. The finale, it will come as no surprise to genre aficionados, unfolds as a protracted cat-and-mouse game between final girl Jennifer and the killer. Intruder doesn’t resolve itself in typical fashion; its closing shot is both amusingly hyperbolic and disturbingly open-ended. Interesting, too, is the economic stimulus for the killer’s spree. Though we might not want to lend the fact too much unwonted weight, not only does it deepen motivation from sheer lunacy, the slasher film’s default setting, it also strikes a resonant chord in the age of the Occupy movement.

Pristine might not be the word to describe the Blu-ray transfer, but it’s far superior to the previous SDVD version from Wizard, which by all accounts could be described as subpar at best. Corrected color timing really brings out some of the more dramatic color usage, like an aquarium filled with bloody water, or a green bottle that acts as a de facto filter during one early scene. Sound is full and centralized; the monaural track isn’t going to win any awards, but it’s fully up to getting over the canned musical cues, and dialogue is always clear.

The commentary track by Scott Spiegel and producer Lawrence Bender, who also cameos as an arresting officer, is amiable and reasonably informative, if a little too prone to terse, shorthand exchanges, and dead spots are a little too frequent. Spiegel discusses the “goddamn Parker” anecdote that occurs twice in the film, which was cribbed by the Coen brothers for their own Raising Arizona; for the record, it’s delivered by M. Emmet Walsh to Nicolas Cage while on break at their factory job. (For a while in the early ‘80s, Spiegel shared a house with the Coens, Holly Hunter, and Frances McDormand.) The 40-minute “Slashed Prices,” filmed early in 2011, features cast and crew reminiscing about their experiences in casting and filming; funniest are reactions to the grotesque special makeup effects courtesy of KNB. Also of note: the behind-the-scenes shuffle that led to the film’s renaming (its original title was The Night Crew) and direct-to-video release. Outtakes from the original Super 8 short are intriguing, but extended murder sequences culled from a workprint source are discountable.

A visually inventive little-known latecomer to the slasher cycle, Intruder finally gets the packaging it deserves, completely uncut and in a vibrant 1080p transfer, with a multitude of intriguing extras, courtesy of Synapse Films.