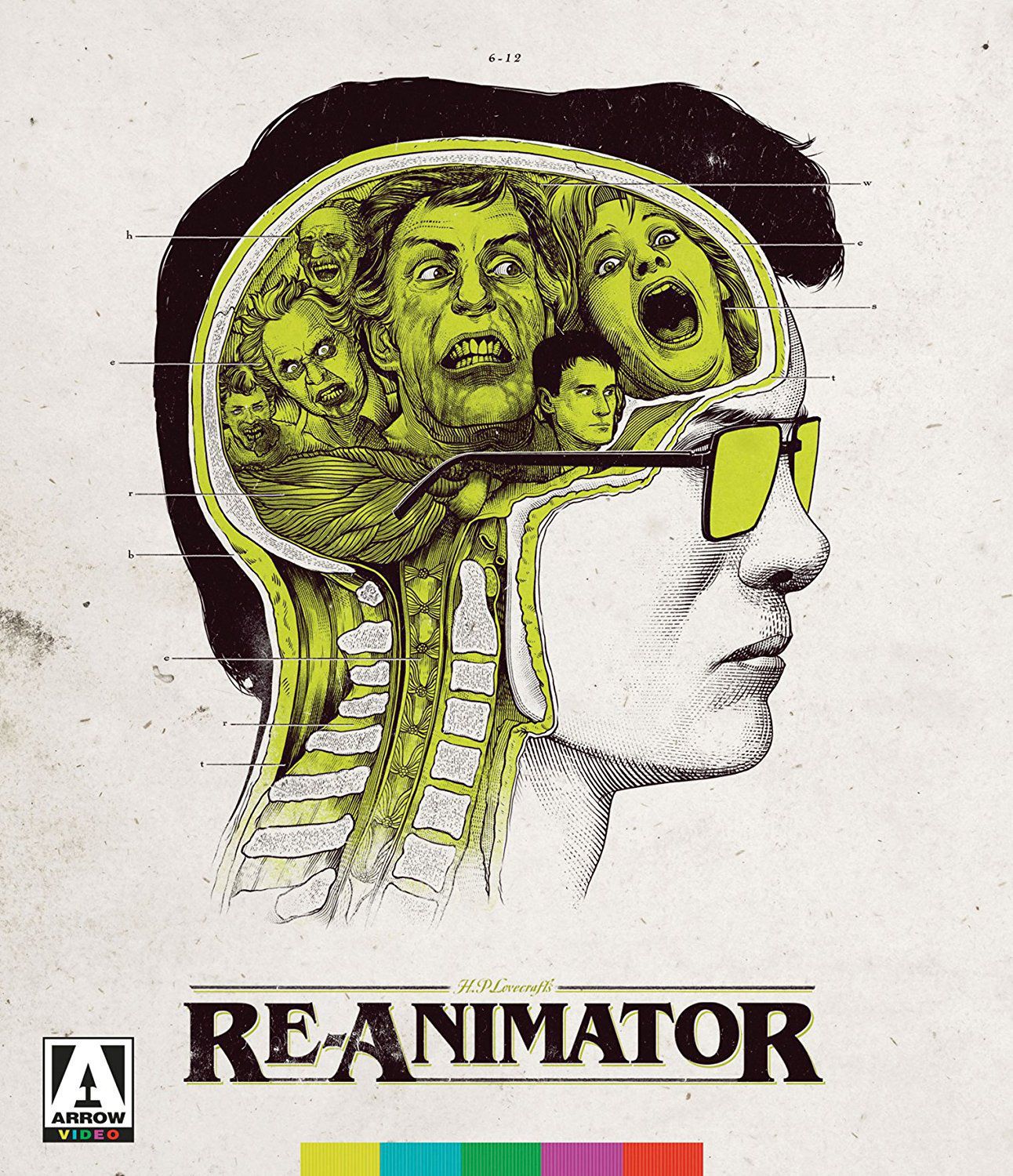 Stuart Gordon’s Re-Animator might be one of the most generous of all American horror movies—a low-budget go-for-the-guts splatter film that is simultaneously a parody and celebration of American chaos and kookiness. Many films have copied Re-Animator’s memorable gore effects, but few have ever captured its remarkably sweet temperament.

At its simplest, the film is a mad-scientist story, and Gordon and his co-writers, working from a series of stories by H.P. Lovecraft, are clearly aware of the classic implications of the horror film’s prototypical mad scientist—namely, that he’s an eccentric, largely lacking the social graces necessary to getting laid, who sublimates his unmet desires with experiments designed to render the traditional sexual act moot. Creating, or in this case, re-animating life is an act of playing God, but it’s also a hostile gesture toward womankind, an attempt to rob women of their monopoly on the perpetuation of the species as well as embrace a less emotionally complicated form of coitus.

The mad-scientist story, then, is a revenge-of-the-nerd tale, and the film often plays as a well-made Revenge of the Nerds if it had featured non-traditional zombies. Third-year medical student Dan Cain (Bruce Abbott) is basically the living embodiment of what used to be referred to as “all-American.” He’s good-looking, hard-working, and dating Dean Halsey’s (Robert Sampson) beautiful daughter, Meg (Barbara Crampton), who he intends to marry upon his graduation. But the recent appearance of a new classmate, Herbert West (Jeffrey Combs), threatens to warp Dan’s unquestioning good intentions.

The film is a love triangle between two attractive functional people and the dysfunctional genius that comes between them. West is only allowed into Dan’s life because Meg refuses to move in with her boyfriend and assume part of the rent, which allows West to move his controversial experiments into Dan’s basement and, in an effort to produce a serum that kick-starts a dead human brain, inadvertently kill everyone who matters to Dan.

Gordon, who’s since directed a number of woefully underrated and increasingly socially conscious horror films, manages a tricky tone of compassionate self-awareness. Re-Animator almost immediately reveals itself to be a parody of wounded male ego. Everything goes wrong because the dueling mad scientists, West and his twisted would-be mentor Dr. Hill (David Gale), get themselves into an escalating pissing contest that eventually manifests itself in a gory bloodbath—which culminates in the notorious pun that finds Meg getting head in more ways than one.

Combs, Sampson, and Gale are as over the top as the outrageous, deliriously inventive special effects; you can practically see a proscenium arch when they’re on screen, as they’re (necessarily) pitching their roles to the rafters. As the film’s straight man and viewer surrogate, Abbott effectively grounds the film’s quieter moments in a somewhat recognizable emotional reality.

But Crampton is the unsung hero here. Meg is the film’s emotional lynchpin—the one entirely innocent victim caught in the fellas’ crossfire—and Crampton plays her with a confident, unvarnished purity that’s reminiscent of Nancy Allen’s performance in Blow Out. The role was probably partially intended as a parody of the gorgeous horror-movie scream queen, but Crampton plays it with a playfulness and vulnerability that transcends the limitations associated with many babes of the genre. And it’s a testament to Gordon’s characteristic decency that Crampton has been afforded the opportunity to make that kind of impression (a few of Crampton’s line deliveries, such as “What about what we could do?” are authentically heartbreaking).

The film is justifiably remembered quite fondly as a rowdy and gory detonation of taboos, but it’s the quieter touches that give it a less readily resolvable texture. Let’s put it this way: Re-Animator is the splatter-comedy ode to egocentrically dashed American dreams.

Certain shots still strike this viewer as shrill and over-lit—which might be inherent to the film’s materials—but this 4K image is a revelation, particularly in terms of the primary colors and the actors’ flesh tones, which are softer and richer than they were in prior home-video editions. The subtle glare of prior restorations is absent, and quite a bit of additional grain and grit has been removed. Black are strong, and the various blood reds are ravishing and painterly. There’s also an abundance of new textural grace notes, such as greater visibility of the strips of flesh below a disembodied head sitting in a metal laboratory tray—if you’re into that sort of thing (and fans of Re-Animator are). Perhaps most importantly, however, the film still has a somewhat feral, unpolished appearance that’s almost certainly true to its inherent source and to its unruly vitality. The various soundtracks are excellent, with strong bass and a prismatic soundstage, which comes in handy during the multi-planed battle royale that occurs at the film’s climax. Richard Band’s score also resounds with especially dynamic pop.

Overstuffed even by Arrow Video’s ambitious standards, this package includes virtually every supplement of note to appear on a previous home-video edition of Re-Animator as well as a bounty of new featurettes. Most notable is the “integral version” of the film, which is available in the U.S. for the first time and includes 20 minutes of additional material that’s been previously available only as outtakes. (Long story short: There are at least three versions of Re-Animator floating around, and the “integral version” combines narrative scenes that were originally used in the R-rated version with the sex and gore of the unrated, filmmaker-approved cut.)

One of the best new supplements is “A Guide to Lovecraftian Cinema,” in which H.P Lovecraft expert Chris Lackey discusses the films that have either directly or loosely riffed on Lovecraft’s work, from Roger Corman’s The Haunted Palace to Ridley Scott’s Alien to Gordon’s Re-Animator and more. Complementing Lackey’s discussion is “Douglas Bradley’s Spinechillers: Herbert West—Re-Animator,” in which actor Jeffrey Coombs reads Lovecraft’s original and somewhat obscure short story. These supplements elucidate the author’s influence on Re-Animator and the other Gordon Lovecraft adaptations that would follow.

Speaking of Gordon, a new interview with the filmmaker emphasizes his theatrical background, particularly with the Organic Theater Company in Chicago, elaborating on how those exhilarating, maddening experiences eventually led to Re-Animator. Meanwhile, a new audio commentary with Gordon and actors Graham Skipper and Jesse Merlin recollects the staging of Re-Animator: The Musical, which Gordon directed, citing how the new production grew out of the film. Complementing these anecdotes is a new interview with the musical’s lyricist, Mark Nutter.

“Barbara Crampton in Conversation” was filmed in 2015, directing refreshing attention to the actor responsible for the film’s most moving performance. Crampton covers her entire career, detailing how she went from struggling actor to horror icon to retired mother to a film producer to an icon for a new generation of horror filmmakers. Lobby card replicas, artwork by Justin Erickson, an essay by Michael Gingold, and a reprinting of the original 1991 comic-book adaptation of the film round out the new portion of the package.

The assemblage of archive supplements is nearly as wide ranging as the new material. The filmmaker commentary with Gordon is dry but intelligent and worthwhile for his fans, while the cast commentary sounds like a drunken reunion of old friends. The charming documentary “Re-Animator Resurrectus” tells a traditional story of low-budget horror filmmakers catching lightening in a bottle, which is retold in the interview between Gordon and producer Brian Yuzna, though Yuzna offers additional details about the challenges to secure funding and hone the film down to its present fat-free incarnation.

Two featurettes with composer Richard Band allow him to discuss his methods, particularly his (justified) motivation for openly aping Bernard Herrmann’s Psycho theme. TV spots, storyboard and stills galleries, a theatrical trailer, and an interview with co-writer Dennis Paoli round out the archive section of the package. Assembled altogether on two discs, it’s impossible to imagine a Re-Animator fan who won’t feel sated by this veritable warehouse of history and minutiae.

Arrow Video has achieved the seemingly impossible, culling together an ultimate edition of an endlessly reissued cult classic that provides both a gorgeous transfer and enough supplements to fill out an empty morgue.