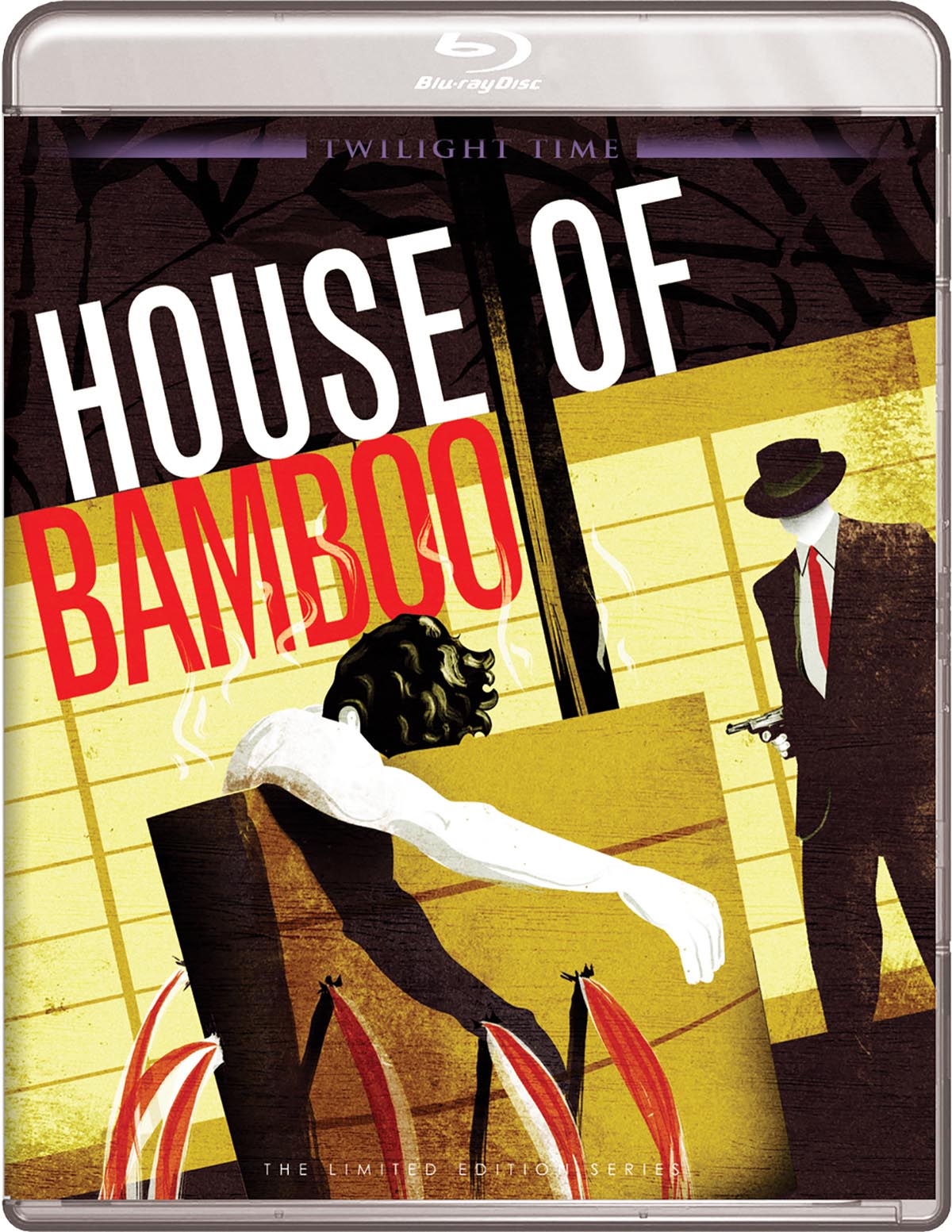 House of Bamboo wants to be a lush, romantic CinemaScope thriller and a Samuel Fuller movie at once. The director’s admirers will recognize those aims as almost genetically contradictory, as Fuller thrives on bold, often vitally threadbare aesthetics that suggest the visual embodiment of a tabloid headline. Which is to say that Fuller’s best films don’t have much use for studio prestige or polish, instead courting the pathos of the immediate and the guttural, though the cross-pollination between the various forms and sensibilities at play in House of Bamboo is fascinating and often intensely beautiful. Fuller could play the studio’s game when he wanted to: The Scope compositions he devised with cinematographer Joseph Macdonald are some of the liveliest and most resonant of any in Hollywood history, subtly wedding Japanese theater and film tradition with American pulp, quietly refuting the notion that an epically sized screen must be statically embalmed in awards-courting “importance.”

Fuller’s vision has its limitations. The sporadically cheeseball script tells a traditionally offensive story of Americans being the master of their domain even when abroad. The scenes between Robert Stack, as an undercover American soldier, and Shirley Yamaguchi, as a Japanese woman once married to a now-dead American crook, may be intended as ironic parody of racial and sexual double standards as applied to white American men versus Japanese women, but they fall embarrassingly flat. These sequences inadvertently play on the ugliest Caucasian fantasies of the Asian woman as servile “other.” To Fuller’s credit, these encounters clearly don’t engage him; the energy dwindles out of the film whenever the Stack and Yamaguchi characters are making doe eyes at one another, which is unfortunately often, whether the latter’s preparing the former a meal or elaborating on how women are raised in Japan to please men. It barely occurs to Fuller to examine that statement or the nature of the culture that inspires it, though he doesn’t quite endorse it either, allowing this subtext to hang uncomfortably unresolved.

But the images tell a better story about the political and cultural intersections between the United States and Japan in the nightmarish shadow of the nuclear bombings that helped to conclude World War II. Fuller and Macdonald fashion wide landscapes that teem with life, thrumming in a manner that remains unusual for Hollywood portraits of outside cultures, which are complemented by astonishingly fluid, immersive tracking shots and long takes. We see fisherman fishing and Noh players performing, prostitutes selling their wares, gamblers gambling, and so on, often in the far background of the deep-focus images. (We also see the newer corporate buildings that threaten to dwarf the relics of an older, pre-fallout country.) One can even discern the tiles in the buildings within the Tokyo cityscapes, or the trees that decorate a villain’s lair, and even the individual planks that allow one to walk across the rooftops of various shacks. The colors are extraordinarily painterly, suggesting a 1950s-era MGM musical that’s been colored in with Fuller’s flamboyant luridness. These visual grace notes offer texture that’s incidental to the literal noir story, yet pivotal to the film as a whole. House of Bamboo is a stylized docudramatic portrait of Japanese life within a genre-film framework, and the presence of such verisimilitude within the artificial often forges an exhilaratingly disorienting series of contrasts.

House of Bamboo’s action scenes are as muscular as anything in Fuller’s oeuvre. There’s the startling entrance of the Big Bad, superbly played with elegant, poignantly homoerotic menace by Robert Ryan, that’s sparked by a thug throwing Stack’s character through the paper wall of a pachinko parlor to reveal an evil gang in wait behind it, suggesting a hidden nest of gaunt insects. (Fuller’s blocking of the gang members is often masterfully, menacingly angular.) A heist scene near the end of the film climaxes with a tableau in which the hoods run against the backdrop of a white wall with Fuller’s camera tracking them horizontally, fashioning a stunning pop-art image that would clearly inform the work of Jean-Luc Godard and, later, the film Reservoir Dogs. There’s a brutally iconic murder sequence (you’ll know it when you see it), as well as the memorable ending, which involves a shootout that manages to simultaneously suggest the finales of both Scarface and White Heat. House of Bamboo suggests a for-hire film that’s been polished with flourishes so great they cumulatively transcend their potentialities as formal window dressing: They’re the film’s pulse, the work of a masterfully intuitive director whose artistic sensibility appears to be governed by an unusually large portion of id.

The images are preserved in all their wide, vividly colorful glory. Reds, grays, blacks, whites, and every hue in between are all radiantly rendered. Image detail is particularly impressive, as one can discern the minutest textures of Sam Fuller and Joseph Macdonald’s compositions, from the skyline dotting Mount Fuji in the opening sequence to the tiny bristles of pine trees to the steam that rises out of a hot bath. A stunningly hyper-textural presentation of a masterpiece of visual imagination. The soundtrack is equally spiffy, with nuanced attention notably paid to the non-diegetic details of the fights, whether they involve fists or firearms (in an important scene, one can discern the sounds of a wooden tub splintering as bullets travel through it to their target).

The supplement package is slim but rich, as Twilight Time is becoming one of the most reliable producers of audio commentaries in the business. The first track features TT regulars Julie Kirgo and Nick Redman, the former characteristically serving as the warmer, more enthusiastic foil to the latter’s more pragmatic conversationalist. They discuss Fuller’s great staging, including the Japanese-influenced visual planes (paper walls, windows, doors) that abound in the images, symbolizing conflicting worlds within worlds. They also understandably rhapsodize over the Scope photography, and examine the film’s progressive, often subtle homoerotic themes. (Kirgo and Redman do go light on the fact that Fuller can’t decide whether the hero’s rampant chauvinism is deplorable or amusing.) A particularly astute observation: Redman notes the entire absence of a Japanese criminal underworld that would clearly be at war with these invasive Americans, describing the film as a free-associative allegory of America’s post-war habitation of Japan. Alain Silver and James Ursani’s commentary is dryer (they appear to be less in love with House of Bamboo than Kirgo), but offers an equally detailed examination of the film that also rates as a must-listen. Rounding out the package are a liner essay by Kirgo, an isolated score track, the original theatrical trailer, and a couple of Fox Movietone newsreels.

This stellar presentation of a beautifully nasty Samuel Fuller gem also boasts a rich, efficient supplements package that should serve as a how-to primer for other labels: Less featurettes, better audio commentaries.

Blu-ray Review: The Dardennes’ Two Days, One Night on the Criterion Collection