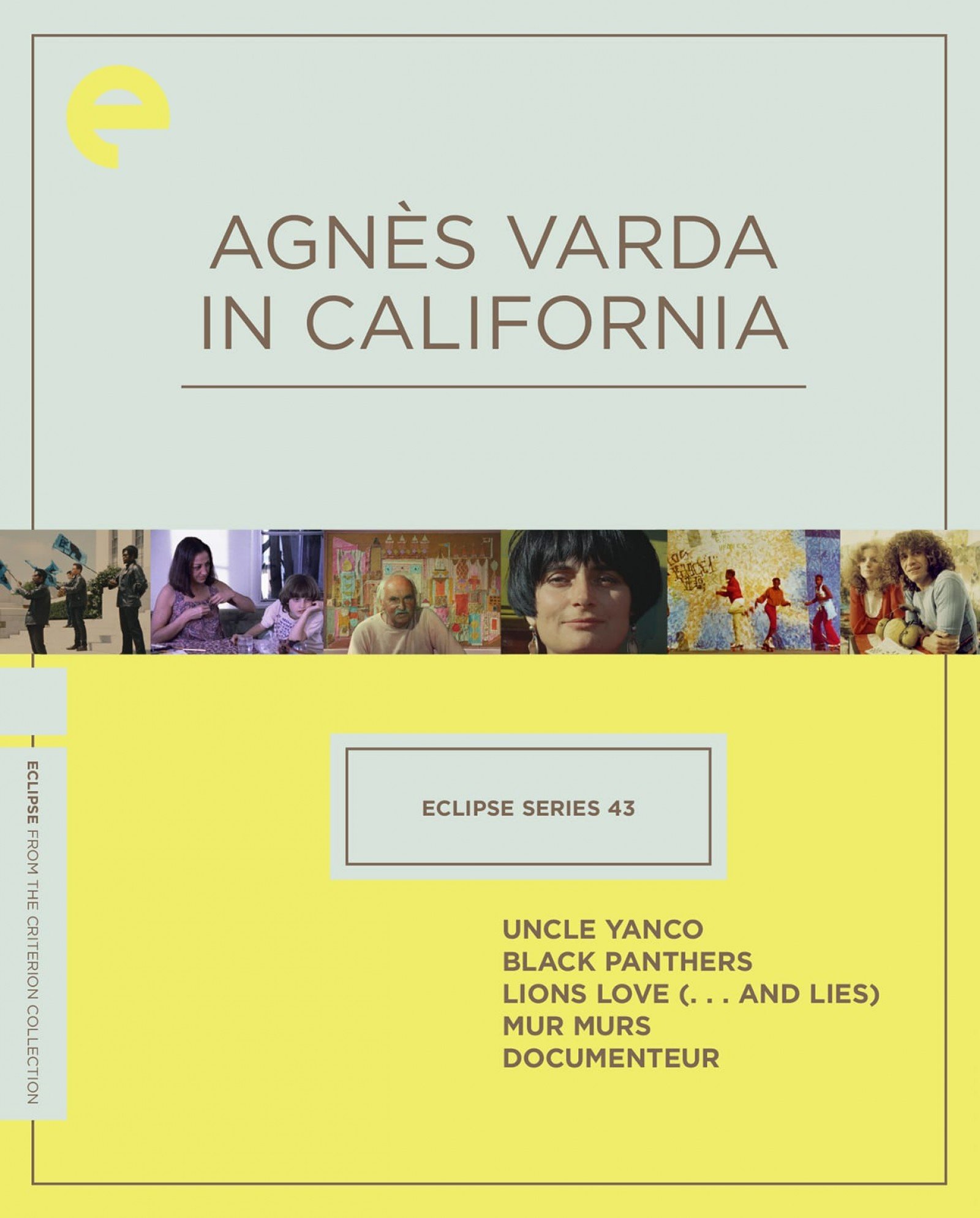 If adaptability is one of cinema’s great intangible skills, then Agnès Varda has proven the utmost emblem of versatility for well over half a century. Narrative features, nonfiction shorts, essay films, and cinematic self-portraits—seemingly nothing has proven outside the Belgian-born director’s reach, no subject too unfamiliar (or, for that matter, personal), no milieu too foreign. Following no less than a dozen short films and Nouvelle Vague-stoking features throughout the late ‘50s and early ‘60s, Varda would relocate to Los Angeles in 1967 with her husband, Jacques Demy, who had been summoned to Hollywood to embark on his debut studio production, Model Shop, inspiring the first significant creative reorientation in a career marked by them. Considering the breadth of topical interest on display in the work produced during Varda’s initial California exodus as well as, later, her second West Coast sojourn in the early ‘80s, there’s no doubt that in each case the timing was, at the very least, fortuitous. Nevertheless, Varda has consistently been drawn to social margins and to eccentric subjects, her knack for finding herself at one cultural crossroads or another too poetically and politically apt to dismiss as sheer serendipity.

While her husband struggled with executives at Columbia Pictures, Varda spent the latter half of the ‘60s working autonomously, on a trio of personal and political films that found the director exploring coastal and urban enclaves from the Hollywood Hills to the Bay Area and back again. Varda’s first two California films, both shorts, are intuitive experiments which find the director inserting herself into unfamiliar situations, training her camera on unknown variables in an effort to gain firsthand knowledge of unique subjects. In Uncle Yanco, she documents her arrival in Sausalito, where she plans on meeting her father’s long-lost cousin, Jean Varda, for the first time. This visit to her uncle’s houseboat is filmed and edited in a kind of patchwork fashion; she observes intimate moments before re-staging and arranging the scenes in recurrent patterns. The elder Varda is, uncoincidentally, a collage artist and aging vagabond, and much of the 20-minute film is given over to detailed examinations of his color-coated canvases and first-hand ruminations on the artistic process.

More conventionally structured, but equally inquisitive and exceedingly urgent, the following year’s Black Panthers forgoes the playful formal measures of Uncle Yanco in favor of observational energy and objective tact. Centered on an Oakland chapter of the radical racial organization, the film flits between on-the-ground dispatches from the frontline of protests, performances, and rallies, to interviews with an imprisoned Huey P. Newton, a founder of the Panthers then recently accused of killing a police officer. On the one hand a powerful time capsule of the burgeoning civil rights movement (Martin Luther King Jr. would be shot just months later), the film is, on another, an all-too-relevant reiteration of an ongoing struggle for equality.

One of the era’s other dominant counterculture movements is dramatized in Lions Love (…and Lies), one of Varda’s most expert cominglings of fact and fiction. By the time of the film’s release in 1969, this new generation of progressively minded youths, unaffectionately known as hippies, had reached its tipping point. Just two months prior to its premiere, the Manson murders had unveiled a dark side of free-thinking, drug-addled culture, while the impending Altamont Free Festival would punctuate the decade with one final flourish of violence. It’s against this rising tide of turmoil that Lions Love transpires. Starring James Rado, Gerome Ragni, and Viva—the former two riding a wave of notoriety following Hair, the latter part of Andy Warhol’s rotating troupe of actresses—as a ménage à trois of friends, partners, and half-baked artists living and loving in a secluded Hollywood chateau, the film paints an at once playful and painful portrait of privileged life lost in haze of ignorance and inebriates.

Varda frames this unanchored existence as a film within a film, with underground filmmaker Shirley Clarke arriving at the trio’s home as a director hoping to locate a narrative in their mess of indulgent activities. In slyly self-reflexive fashion, Clarke, playing an obvious Varda surrogate, quickly grows exasperated of her subjects—whose ceaseless debates recall the stream-of-consciousness jabbering of Warhol’s more character-driven films, such as Chelsea Girls—while across town her producers debate the parameters of her artistic control. As the film progresses, reality continues to exert its unruly influence, culminating in a cold-water moment for the characters (not to mention the cast and crew) as they sit and watch the news of Senator Robert Kennedy’s assassination unfold on TV. A work of small moments and grand tragedies alike, Lions Love is that rarest of retroactive landmarks, a film which both reflects its cultural moment and anticipates its cinematic offspring.

Following Lions Love, Varda would return to France, where she continued to work for the better part of the 1970s, before being called back to Los Angeles to commence production on a new film concerning escalating police violence, a project which would ultimately never get off the ground. Instead, she would channel the frustrations into a pair of quintessential L.A. films. Released in 1980, Mur Murs bears the marks of an artist fascinated by her surroundings. A largely observational compendium of L.A. county street art, graffiti, and the large-scale murals peppering architecture from Venice Beach to the farthest reach of the inner city, the film plays at once as a geographical topography of a city in transition and a meditation on artistic expression and its sociological outgrowth. Created by a combination of professional and amateurs alike, many of whom Varda tracks down and allows to elaborate on their process and inspirations, these highly detailed and largely working-class stylizations once stood as visual representation of all the colorful character and cultural diversity of greater Los Angeles. And though new iterations continue to paint certain regions of the city, the early ‘80s stood at a specific flashpoint of creativity and nascent racial tension which would soon spill over into national view, rendering these works especially fascinating for their simultaneous beauty and attention to urban unrest. The result is thus quaint in its relaxed course through neighborhoods of various ethnic majorities, and vaguely unnerving with regard to the injustice which would soon plague these vibrant locales.

Varda’s next project, the more narrative-driven Documenteur, grew directly out of the experience of making Mur Murs (it even begins with the same shot which closed its predecessor) and, despite its largely fictitious framework, again captures aspects of the city otherwise lost to time. Starring Sabine Mamou, the editor of Mur Murs in her only acting credit, as a single mother named Emilie, emotionally adrift and left to care for her young son (played by Varda’s own son, Mathieu Demy) during a particularly chilly winter, Varda’s final California film is also, perhaps, her most personal. Emilie works for a film production company, appears to have aspirations to advancing her talents, and at one point even contributes voiceover narration to a film which bears unmistakable resemblance to Mur Murs. But otherwise she seems disenchanted with her life, ruminating in voiceover about the existential and emotional crossroads she feels she has reached. Her state of mind is ably reflected in the overcast pallor of the film, and as such plays as both a companion piece as well as the direct inverse of the vibrant Mur Murs. Varda, no matter the impressive quality of her output out west, appeared at his point ready for a change of scenery. The opening titles describe Documenteur as “An Emotion Picture,” a cunning play on words that also functions as an apt characterization of all her California films. The deeply felt passion coursing through these works speaks not to an outsider’s perspective, but to someone whose insatiable curiosity and creativity inspired unique and natural expressions of itinerant living.

Criterion’s 43rd Eclipse set brings together all five of the films Agnès Varda produced in California, in a DVD collection boasting the most recent restorations undertaken at the L’immagine Ritrovata laboratory in Italy. The picture quality of each film is therefore rather strong by the measure of standard-definition transfers. Colors, particularly in Uncle Yanco and Mur Murs, are vibrant, while contrast is nicely balanced in the moodier passages of Documenteur and Lions Love. Texture appears authentic, with noticeable grain and the more filmic attributes of the picture looking well preserved. Audio, meanwhile, is kept to original monaural soundtracks, with adequate depth and little extraneous noise to note. For the most part these films are rather serene sonic experiences, but the soundtracks are often busy with voiceovers. Dialogue is thus appropriately foregrounded and easily audible. And when the action does escalate, as in some of the more passionate displays in Black Panthers, sounds and voices comes through in sharp, robust fashion.

As per the Eclipse ethos, there are no digital supplements. However, another batch of well-researched and insightful liner notes by Michael Koresky are offered for each film.

The five films Agnès Varda made during two stints in California remain among her most inspired, finding her at a succession of cultural and cinematic crossroads which evidence her uncommon adaptability and insatiable curiosity.