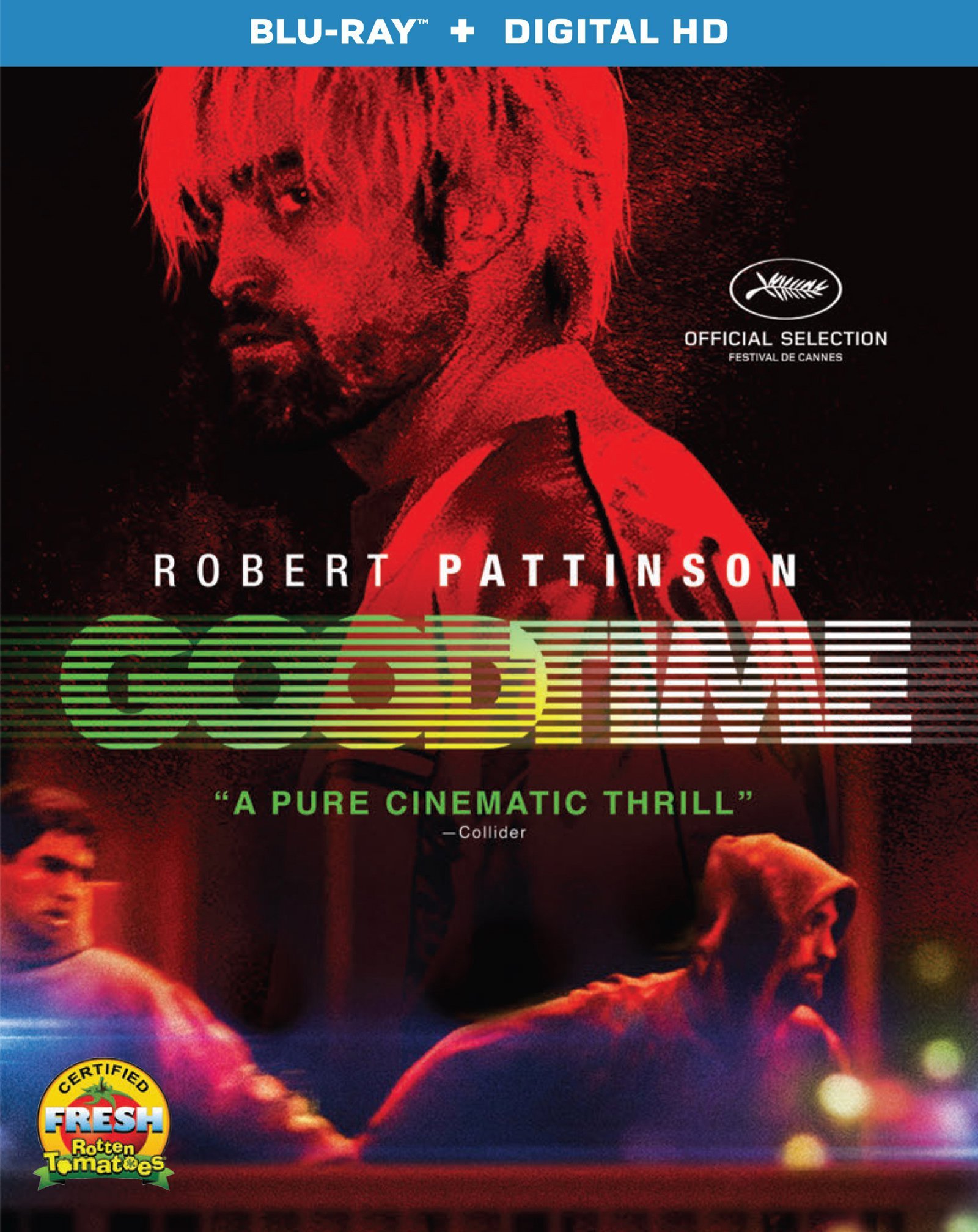 Constantine Nikas (Robert Pattinson) has an instinct for self-preservation that poisons the lives of everyone around him, so it’s no coincidence that Josh and Benny Safdie’s crime thriller Good Time opens in therapy. Connie’s brother, Nick (Benny Safdie), has a learning disability, and just as Nick sheds his first tear in a court-ordered appointment with a psychiatrist (Peter Verby), Connie bursts into the session. Brimming with alarm and outrage, he pulls Nick away from the doctor and convinces him to help pull off a bank heist, which is only momentarily successful, as Nick winds up in Riker’s Island, leaving Connie desperate to come up with thousands of dollars in bail money.

All of this action, which transpires over a few days, occurs before the opening credits of Good Time, but it elapses in a kinetic present tense of urgent close-ups, hasty decisions, and constant negotiation. From Daddy Longlegs, a tender but harrowing comedy about an irresponsible part-time father, to Heaven Knows What, a fable about heroin addiction set in a similar state of heightened realism, the Safdies play with time like it’s an accordion, stretching out notes of bliss and anxiety while compressing the daily lives of their characters in order to convey the constant state of hustle and stresses necessitated by being poor and hungry for drugs, cash, or a bite to eat in New York City. A healthy suspicion of authority is an operating premise here (it’s no wonder that Connie thinks of himself as a hero for rescuing his brother from a therapy session), but so is desperation: For Connie, the time is always now, an instant where a bad decision might find him dead or in jail, but a good one might offer him his first good opportunity for some elusive form of escape.

Connie is a mediocre criminal with an undeniable talent for drawing strangers into dicey situations, and the marvel of Pattinson’s performance is how precisely the actor navigates the lies and pleading conviction innate in his character’s bravado. Pattison’s shaggy charisma is indebted to a slew of New York films from the 1970s and ‘80s, and Connie’s dark journey through the night (something like if Ratso Rizzo or Sonny Wortzik were inserted into After Hours) is both candy-colored and scrupulously designed to address how the urban poor interact and negotiate with city services. Paced within an inch of its life, Good Time is always simultaneously intoxicating and discomfiting, the logical result of a film where elements of artifice and authenticity butt up against one another from the outset. (The film’s oddly menacing opening shot is a relentless zoom into an utterly anonymous concrete high-rise.)

The people Connie encounters and implicates in his flailing attempts to rescue Nick are indicative of the film’s potent stew of genre clichés and vérité portraiture. Jennifer Jason Leigh provides antic comic relief as Corey, who leaves a bed full of puppies in her mother’s well-appointed apartment in the naïve hope that Connie will take her on a tropical vacation. After failing to exploit her good credit to free Nick, Connie insinuates himself into the apartment of a Haitian grandmother, Annie (Gladys Mathon), whose husband has just left the hospital. There, shacked in a room lit by the glow of a television, he helps himself to a bottle of hair bleach and talks her watchful teenage granddaughter, Chrystal (Taliah Webster), into a dinner of chicken tenders. Their relationship, at once funny and nauseating, is solidified by their mutual hatred of police (they see Cops as an indictment of police brutality) and the fact that they’ve both been raised by immigrant grandparents.

But events continue to trend toward madness, senses heightened by every element of Good Time’s production. The score by the brilliant electronic composer Oneohtrix Point Never is a severe and assaultive series of notional crescendos, shifting from careening pop riffs to horrifying ambient clatter. Cinematographer Sean Price Williams’s nocturnal photography is a fantasia of available light: storefront neon signs and police sirens tint Connie’s face and fill in the bags under his eyes; when he and Chrystal pull up to a White Castle with the petty hood Ray (Safdies discovery and repertory player Buddy Duress), the façade radiates like the Graceland Chapel. In a film that spends so much time scrutinizing faces for elusive signs of hesitance or regret, establishing shots (a helicopter’s view of a drive from Queens to a Long Island, an amusement park full of black-lit skeletons and death-obsessed imagery) mythologize the scope of Connie’s odyssey while retaining a Cassavetes-like feel for raw emotions that tend to spiral into lies and chaos.

Ray, a standout in a cast of searing supporting characters, looks uncannily like if Justin Theroux had recently been kicked in the face. His backstory comes via a dizzying, Scorsesean flashback that establishes him as Connie’s ugly mirror image: a louse who was incarcerated after getting caught in a misbegotten scheme involving a stash of money and a bottle of liquid LSD. This is the one sequence in the film that doesn’t feel entirely sui generis, but it succeeds as homage and in setting up an ideal foil for Connie. Both men stem from Eastern European ancestry, and this additional commonality makes a scold and an amateur sociologist out of Connie. “You serve no function whatsoever,” he tells Ray, an insult that’s both cutting and incoherent; Connie has fucked up royally enough that Ray is his last hope, the only character remaining with any agency or freedom in Connie’s bastardized heroic narrative.

Much of Good Time’s queasy, sustained high derives from Connie’s lack of compunction about exploiting people even more disadvantaged than he is, but the film’s unexpected emotional wallop is a product of how the Safdie brothers, co-writer Ronald Bronstein, and Pattinson judiciously draw out Connie’s tragic dimension. He evolves imperceptibly from a slimy force of nature into a man who realizes he deserves what’s coming to him.

This Blu-ray beautifully honors the hyper-textural vividness of Good Time’s aesthetic. The image is sharp when it needs to be, as illustrated by a crisp establishing shot that opens the film, and luridly hazy elsewhere, such as in the red- and pink-hued sequences that communicate Connie’s canny and disturbing use of sexual manipulation. Colors are rich and explosive, and facial details—which are pivotal to this symphony of visages—are rendered with X-ray specificity. The soundtrack is a show pony, with propulsive bass and wild swings of sound as orchestrated by Oneohtrix Point Never’s gorgeously melancholic, synth-driven score. Occasionally, the score and the on-screen sound effects merge, but that’s almost certainly intentional, suggesting a fusion of emotions with outer reality.

The audio commentary with directors Josh and Benny Safdie, producer Sebastian Bear-McClard, actress Taliah Lennice Webster, and actor Buddy Duress is very informal, but the filmmakers are revealing their working methods. The Safdies discuss how they surrounded Robert Pattinson with a vivid ensemble of found faces, lending Good Time a docudramatic texture that grounds the freewheeling narrative. The Safdies worked with district attorneys, loan sharks, psychiatrists, police officers, convicts, and many others, soliciting advice and often inserting the people directly in the film, in remarkably open and empathetic gestures that yielded dynamite filmmaking. The directors also cover their use of settings, one of them saying of a shopping mall, “We had this location, and we shot it as if we stole it,” which says quite a bit about the film’s run-and-gun tempo. “The Pure and the Damned: Good Time” featurette covers similar ground, though it’s more detailed than a typical making-of puff piece, with striking on-set footage. “The Pure and the Damned” by Oneohtrix Point Never featuring Iggy Pop, a haunting music video directed by the Safdies and shot by Sean Price Williams, rounds out a slim yet substantial package.

Lionsgate outfits one of the most original American crime films in ages with a gorgeously gnarly transfer.