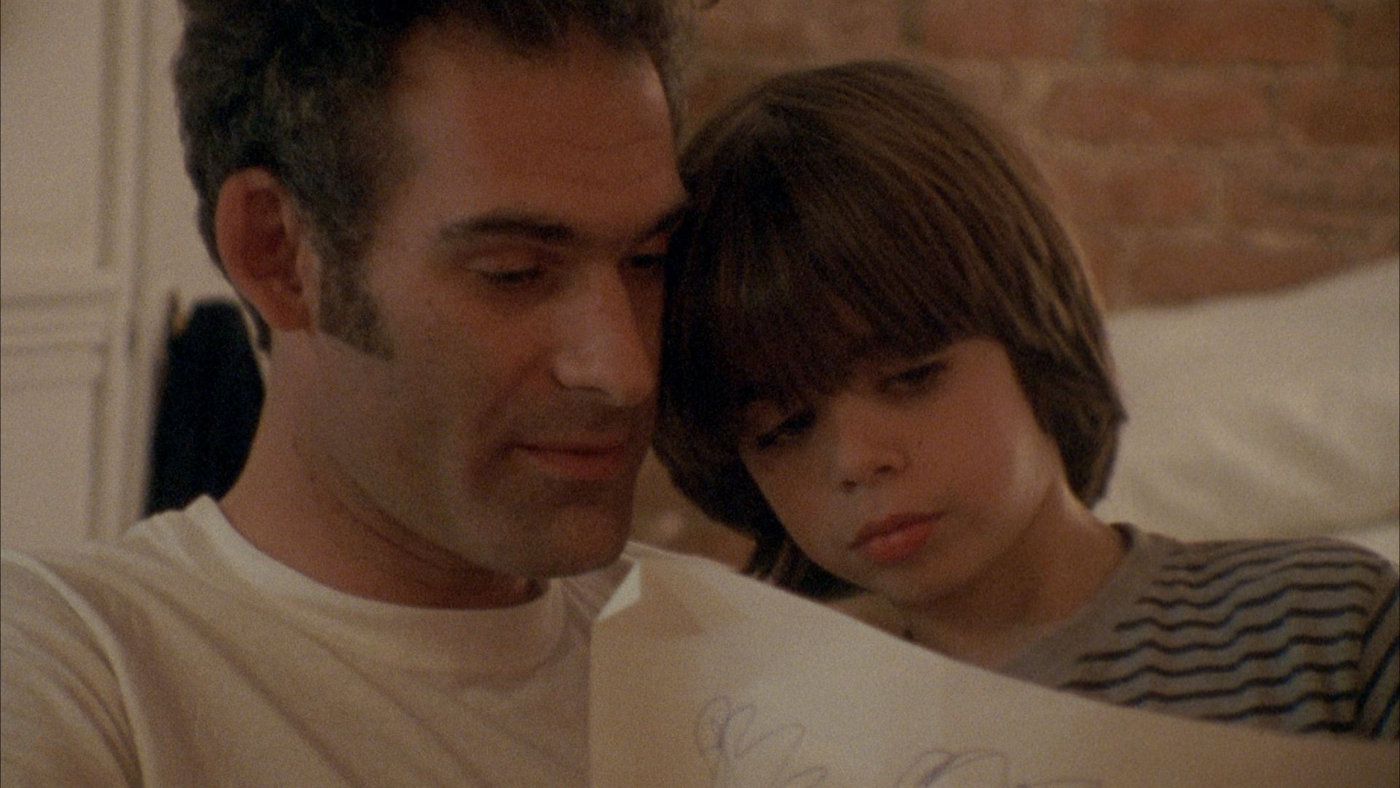 Sibling filmmakers Ben and Josh Safdie’s Daddy Longlegs follows Lenny (Ronald Bronstein), a frustrated would-be creative—you can tell by the hair, which is invitingly unkempt, and his occupation as a movie theater projectionist—as he struggles to care for his two children over the few weeks he’s given each year to see them. The first half of the film is fairly dreadful—one of those micro-budgeted character studies that afford a few actors the chance to strive for realism in the traditional Cassavetes sense, which too-often equates to showily stepping on one another’s lines in a race to say virtually nothing. Not unusual, the film equates realism (i.e. not Hollywood) with boredom: Characters are rarely allowed to say anything interesting, just as they are rarely allowed to pleasantly surprise one another. Lenny continually fails at small tasks, whether it is an unconvincing brush-up with the principal of the children’s school, or a prolonged argument with the ex over the phone within inappropriate earshot of the kids. This somewhat rigged procession of all that sucks is the worst of all worlds; the scenario is as predictable as a Hollywood picture, only in a more consciously awkward direction (the film could be called Prick Being Prick), and the execution—the self-congratulatory pauses, the shaky mud puddle cinematography—is just as false, only without the polish that a fun, reasonably competent Hollywood picture can offer.

But little details begin to accumulate, and you begin to suspect that the Safdies might (partially) know what they’re up to. One brief, early moment of Lenny pretending to pull fish from a lake especially stands out, as it allows you to see someone who isn’t always remote, self-absorbed, and generally tedious and miserable to be around. And a midway plot turn shakes the movie out of its stasis: Lenny, desperate to get to work, gives his kids a watered-down adult sleeping aid to keep them from waking up while he’s gone. This grossly negligent action works too well: The children sleep for a few days with the brief possibility that they might not awake at all. These moments, suffused with a surprising, primal horror, ironically humanize Lenny. We see him, not just as a prick, but as a father on the fringes of polite society terrified and baffled by the various checks and balances of responsibility—attention to occupation versus attention to family, private amusement versus boundaries—that a theoretically well-adjusted person takes for granted. This passage of panic, prefaced with Lenny frantically racing up and down the cramped stairwell in attempts to browbeat his neighbor into watching the kids for him, is effectively set up, and explains Lenny more vividly to us through action and body language, giving him human contradiction.

A number of moments after the bit with the sleeping pills also register: an exchange with a current girlfriend (who looks like the ex), a creepy nightmare with a giant mosquito, and yet another episode of casually alarming negligence. The look of the film, which initially serves little purpose other than to be fashionably ugly, begins to make sense: We grow to understand the narrowness of Lenny’s existence, the desperation, the money issues, and the general bafflement of two children he unintentionally mistreats. A few reviews have called Daddy Longlegs nostalgic, a label that initially mystified me considering the latter events of the film, but that word goes a way toward explaining why the film works near the end. We understand that these children are indeed seeing their father nostalgically, because their strained, frazzled connection with him is still a connection. Daddy Longlegs might have been something, a more original than usual treatment of what is basically abuse, if the earlier scenes had been more clearly worked out. As it stands, the film is a notable misfire.

Review: Here and There

Trash Humpers and the Art of Harmony Korine’s Poet-Pranksterism