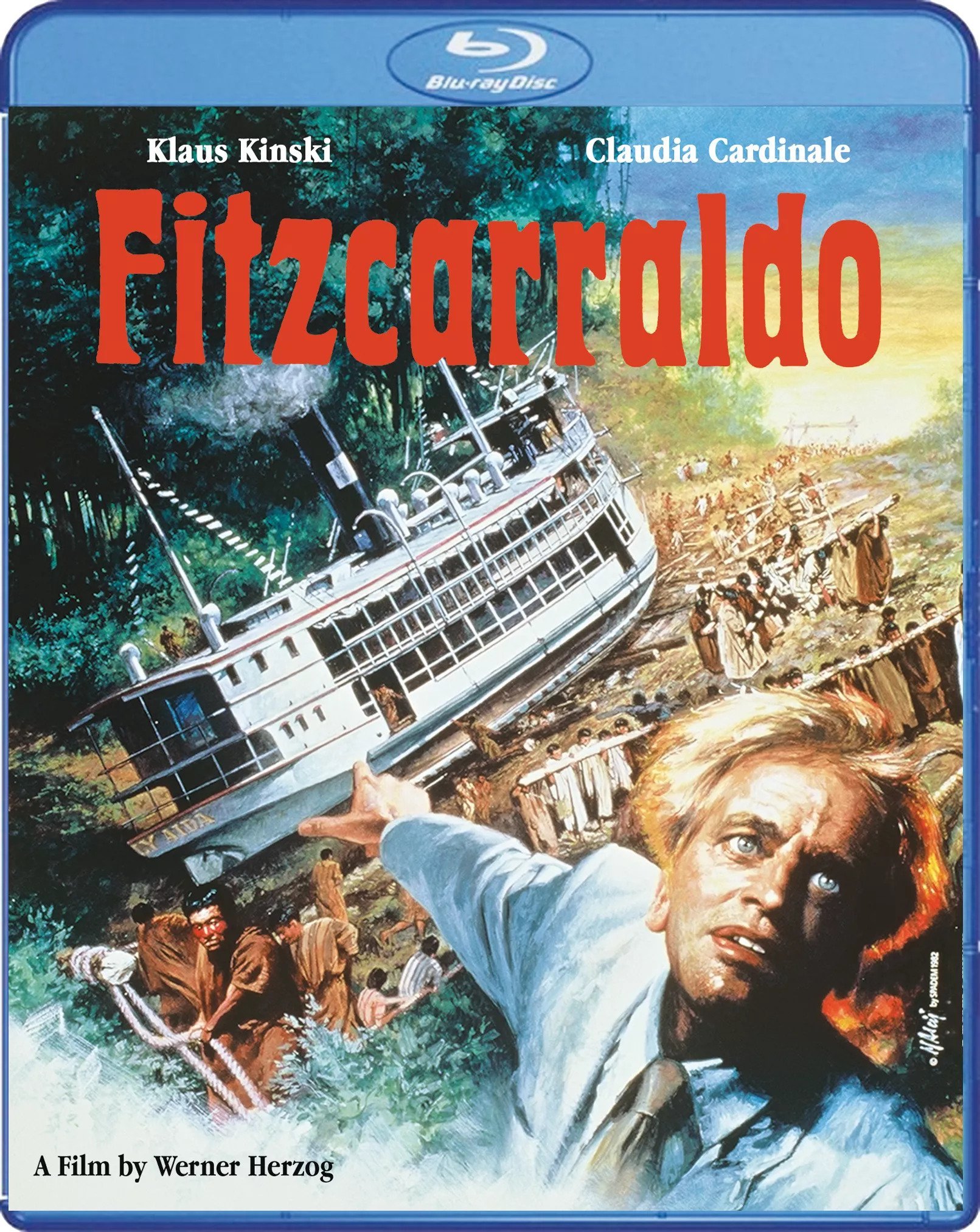 In an early scene from Fitzcarraldo, a brothel madam named Molly (Claudia Cardinale) delivers an unintentionally prophetic bit of encouragement to the titular character. “It’s only the dreamers who move mountains,” she says to Brian Sweeney Fitzgerald (Klaus Kinski), ambitious entrepreneur and lover of musical theater who dreams of constructing an opera house in a secluded region of Iquitos at the height of the turn-of-the-20th-century Peruvian rubber boom. Molly and Fitzgerald, nicknamed Fitzcarraldo by the Amazonian natives on account of his difficult-to-pronounce surname, have settled in Iquitos with grand development plans, but few resources to aid in its realization apart from the former’s nest egg. Rather, the obstacles for both Fitzcarraldo the film and Fitzcarraldo the character would prove more logistical than financial. As has long been documented, Herzog’s intended opus, like the task of his unintended surrogate, was at once hampered and heightened by its leader’s vision and that vision’s allegiance to cinematic verisimilitude.

Due to the flourishing rubber trade, few regions remain available to Fitzcarraldo upon arrival for proprietary claim. His chosen site is ultimately cut off from the Amazon, flanked by two tributaries, and impeded by a series of rapids. Industrially untapped and thus a source of both monetary and developmental potential, the location leaves Fitzcarraldo, his crew of natives, and the 320-ton steamship he plans to feature as a central attraction, at a literal impasse. In order to preserve this creative ideal and reach its destination, then, the ship must be dragged over an enormous mountain and sent sailing across a treacherous river pass. This gargantuan task quickly becomes the dramatic crux of the narrative, its inception and implementation accounting for a majority of the film’s action. It was likewise the albatross of the actual production, an objective marked by inconceivable obstructions which brought Herzog and his collaborators to their proverbial knees. To watch Fitzcarraldo, played with mad abandon by Kinski, the part-time muse/part-time nemesis of his director, orchestrate the transportation of this vessel is to watch Herzog mount a drama as rhapsodic as any Enrico Caruso opera which inspired our protagonist to take up such an impractical venture in the first place.

In thrall of his surroundings and the vastness of the South American milieu, Herzog trains his lens on the physical, volatile attributes of the landscape. As such, there’s little in the way of structured narrative or exposition in Fitzcarraldo. Instead, an appropriately elemental sense of momentum dictates the rhythm of the film. Cinematographer Thomas Mauch’s camera soaks in the density and humidity of the atmosphere, finding an at times overwhelming beauty amid the oppressive conditions. Likewise, no matter the irascible nature of the Kinski persona, Herzog manages to capture a delirious energy and furious creative commitment perfectly suited to the cavalier ambition of the Fitzcarraldo ethos. Together they represent a kind of irrepressible force which, as first suggested by Molly, could have likely moved the mountain over which the two drag their shared weight. When Fitzcarraldo and his ever-dwindling conspirators finally bring the ship down the mud-steeped incline and into the even more perilous waters of the Ucayali rapids, it’s apparent that what this journey represents is less a test of will than a complete indoctrination of the creative spirit.

The troubled production of Fitzcarraldo was famously captured by Les Blank in his 1982 documentary Burden of Dreams, a work of such intimate access and advantageous insight that it’s become an almost inextricable complement to Herzog’s film. Of course, such well documented behind-the-scenes drama can obscure any film’s shortcomings, which in Fitzcarraldo’s case can at times be felt in the underdeveloped supporting characters (particularly Molly, who asserts herself so forcefully early on, but is of otherwise secondary concern), somewhat leaden plotting, and perhaps unavoidable instances of technical insufficiency due to shooting predicaments. The film’s stature within Herzog’s catalogue, however, cannot be reduced solely to the romanticism of inextinguishable artistry in the face of insurmountable odds. One might say the sublimation of Fitzcarraldo’s flaws is less circumstantial justification than a kind of unconscious acknowledgement of art’s often irrational efficiency. If the film is a triumph, it’s one in every sense of the word.

Shout! Factory’s Blu-ray release of Werner Herzog’s Fitzcarraldo is pleasing, if not overly impressive. The 1080p transfer is soft yet textured, with a warm but never sharply defined color palette. Detail and instances of depth, however, are perceptible, as is consistent evidence of grain. Sound, meanwhile, comes in a variety of options. The original German track is preserved with a DTS-HD 2.0 channel mix that sounds crisp and accurate. The English dub, offered as both 2.0 and 5.1 mixes, is more problematic, pushing the dialogue out front in an unnatural, occasionally distracting manner. The surround elements of the 5.1 mix, however, are quite satisfying, with distinct sonic separations and crisp effects. Popol Vuh’s music likewise comes across more forcefully in surround, though it remains a powerful element in any iteration.

Supplements consist of two audio commentaries, one by Herzog and producer Lucki Stipetic with moderation by Norman Hill, and a second German language track (with English subtitles) featuring Herzog in conversation with moderator Laurens Straub. Both are thoroughly informative, touching on some of the same information, but facilitated by the director’s typically frank and involving storytelling style.

A triumph in every sense of the word, Herzog’s intended opus, like the task of his unintended surrogate, was at once hampered and heightened by its leader’s creative vision.

Blu-ray Review: Martin Rosen’s Watership Down on the Criterion Collection