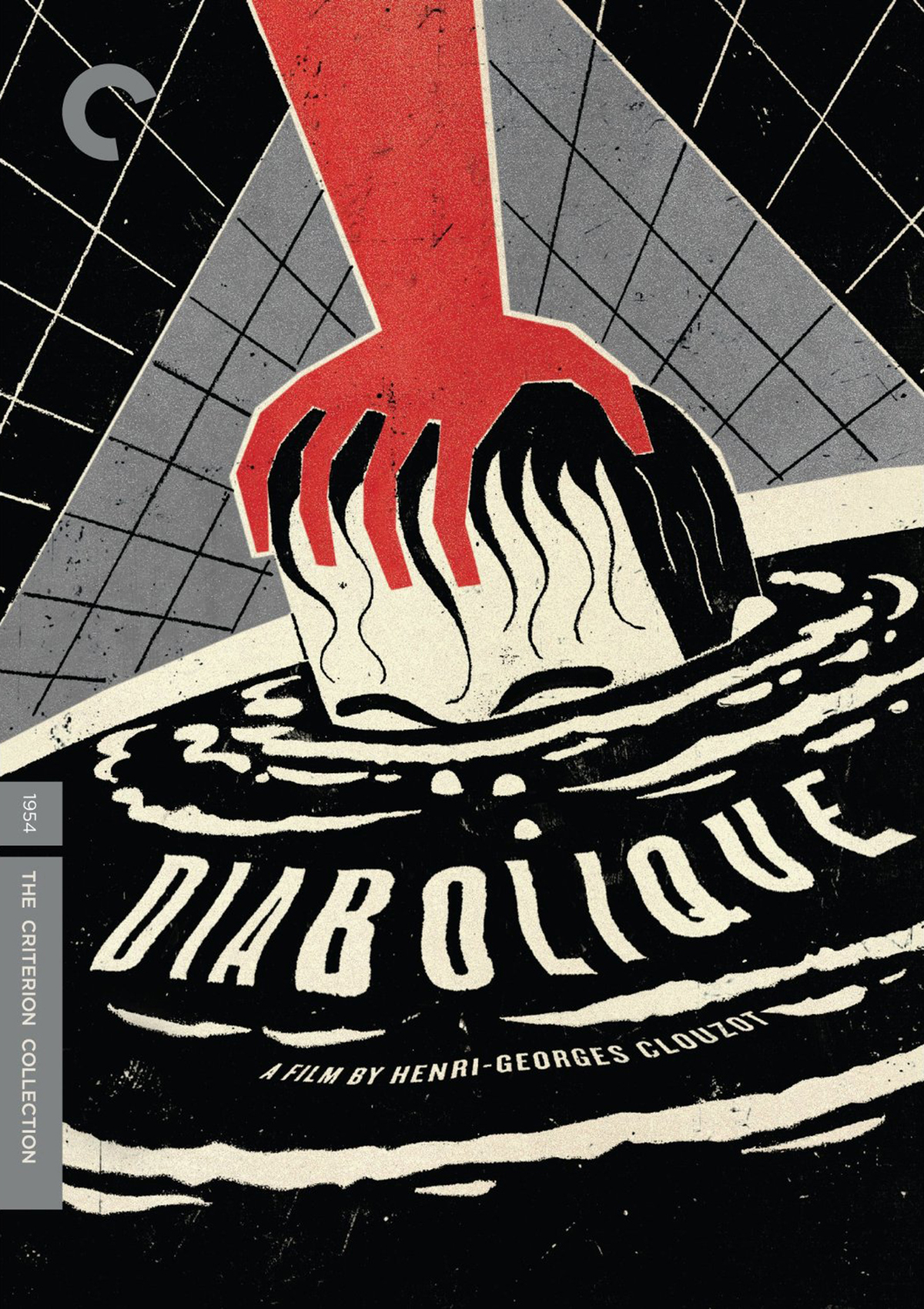 Good thrillers usually suggest a world of perversity that the proper plot only partially touches on—a realm of unease that might play to our most paranoid suspicions of the danger inherent in everyday life. Henri-Georges Clouzot’s Diabolique, often and famously cited as an influence on Psycho, is such a film. Diabolique, like many of Clouzot’s movies, is really a caustic, despairing character study masquerading as a thriller. It conjures an atmosphere of suffocating rot that’s so palpable, in fact, that the murder plot is in many ways its least disturbing element.

Diabolique is set almost entirely within the grounds of a boarding school that’s being slowly strangled by its cruel headmaster, Michel (Paul Meurisse), who pinches pennies and severely punishes his students for trivial misdeeds. Michel is clearly the terror of the school, as the teachers’ body language in response to even his name readily testifies. Michel is one of those people (there are enough of them in the corporate world) who seem to derive his vitality and power from his indifference to anything that doesn’t directly relate to the attainment of his personal pleasures. Michel actively torments his wife Christina (Vera Clouzot, the director’s wife), cheating on her openly with Nicole (Simone Signoret), belittling her, and, in one troublingly suggestive ellipse, probably sexually abusing her.

Christina and Nicole have forged an unlikely bond over the realization that they’re troubled by the same man. Christina is a frail and naïve young woman that Michel married for her inheritance (the school is actually Christina’s), while Nicole is a strapping, somewhat masculine teacher at the school who appears to suffer few fools. It’s suggested that Christina, who has a weak heart, feels that she’s probably entitled to this misery, as she’s a submissive type who could potentially do no better than to resign herself to Michel’s brow beatings. But Michel’s shabby treatment of the students is an offense she won’t tolerate, which renders her susceptible to Nicole’s suggestion that they drown him in her hometown, and then sneak him back onto to campus so as to dump him in the school’s murky, stagnant swimming pool.

The dirty water is a literal and figurative motif that haunts the film. The water is, most obviously, the murder weapon, but it’s also symptomatic of the bitter and suffocating world that Clouzot effectively establishes. The staging is masterful without calling intention to itself and the shots are meticulously composed yet still thrum with life. The children and the teachers clearly live by the sort of flimsy mutual truce that seems to exist in real schools, and you can tell that both factions are on the verge of losing their calm to the unwavering stress that goes with living with the other. The teachers are gossipy and conspiratorial, while the children are mysteriously feral little animals that never seem to have what they need or want. This boarding school, with or without Michel, is practically a war zone.

Diabolique has several nasty jokes up its sleeve, but its most pitiless may be its casual assertion that most teachers see their profession as glorified babysitting, a truth we all suspect but rarely voice, particularly in 1955. There’s a “let’s just get through the day” quality to the interactions in this film that stays with you; Diabolique, on the surface a thriller, might also be one of the most cynical classroom movies ever made—though no actual scenes are set in a classroom. Clouzot, particularly in this and The Wages of Fear, has a talent for conveying both the tedium and the strange occasional exhilaration of living continually on the edge.

As Terrence Rafferty writes in his excellent essay that serves as the liner notes for this Criterion edition of the film, Clouzot’s attention to the neorealist chaos of the environment lends the thriller tropes an unusual credibility that can’t even really be found in much Hitchcock. Hitchcock was an expressionist, while Clouzot was somehow a realist and expressionist in roughly disconcertingly equal measure. The boarding school is portrayed with the stressed and rumble-ready textures of a real school, yet it also appears to exist in a realm of otherworldly myth that’s particularly embodied by the creepy pool into which Christina and Nicole eventually decide to dump Michel’s body. The tedium of murder seems to be conveyed in unusually specific terms, such as the logistics of lifting a chest containing a body up into the back of a car, a moment that’s been ripped off by subsequent films hundreds of times, while other scenes make sense only in symbolic fantasy terms, such as the classic moment where Michel slowly unexpectedly rises out of the cold bathtub.

Michel’s murder, of course, solves nothing. It only exasperates the unease that’s been palpitating beneath the surface the entire time, as this film—again like The Wages of Fear—is clearly a parable about the working class being forced to the grind every day whether they like it or not. It’s a mark of Clouzot’s dry, pitch-black wit that Christina never really arises as the film’s heroine; she’s just another non-entity who does as she’s told. You expect Christina to take control of the film, especially considering the audience sympathy-skewing handicap that Clouzot and his writers have provided her, but she’s never much more than a self-delusional fool who hopes to retain her purity while standing bosom-deep in the muck. Clouzot seems to view Christina with contempt, as she’s never allowed to exhibit the resources, and free-thinking, that could establish her as anything but a complacent goody-goody simpleton (certain scenes with Michel are disturbing because you empathize…with him). Christina accepts her imprisonment at Michel’s hands until another alpha figure, Nicole, urges her to take action. And that action, of course, breaks her.

So the film, which has empathy for no one, offers the somewhat unpleasant sensation of watching mice navigate a maze that has no cheese. You watch Diabolique with a detached fascination, and Clouzot has been criticized for the tendency his films have to trigger this kind of response. And, truthfully, the film might’ve been harder to shake if it had invited some conventional audience association. Psycho clearly followed Diabolique in a number of ways (a few shots in the latter’s famed shower sequence are virtually identical to a few of the camera placements in the former), but Hitchcock made a deeper, more troubling film that seems, or must have seemed at the time, to sink into moral chaos after the still-jolting murder of a mostly sympathetic character. (Brian De Palma, one of Hitchcock’s most famous students, even superseded the master in this trick.) Clouzot, on the other hand, offers a perfectly realized environment in which little is at stake, as all the souls are already long lost. Come to think of it, that might be scarier.

This Criterion edition is a major improvement over the grainy/faded eyesore I first saw in college, that’s for sure. Yet the picture quality isn’t too pristine, as has been the case with certain reissues of older films. The black-and-white cinematography is sharp with vivid contrast of the darks and lights (particularly evident in the film’s climax), yet a subtle murkiness remains that’s true to both the times of the film’s production as well as to the subject matter itself. The sound is superb, which is important for a film that relies almost solely on diegetic sound. The creaks of the doors, the thuds of the heavy trunk, even the pouring of the cheap wine—all are restored with a crystal clarity that’s invaluable to the effectiveness of this meticulously designed film.

The extras are somewhat redundant, as they all stress the Hitchcock connection while disputing the New Wave critics’ assertion that Henri-Georges Zlouzot was one of the tired old fuddy-duddies who embodied a banal “tradition of quality.” I support both points, but wished that a broader spectrum of Diabolique had been covered, though the features are still refreshingly erudite in the Criterion tradition. The Terrence Rafferty essay is an ideal beginners’ overview of Clouzot that briefly covers his entire career while celebrating the exacting craftsmanship that went into making Diabolique. Serge Bromberg’s introduction covers almost exactly the same ground, but it’s an impassioned TCM-style intro for those who’ve never seen the film. Kelley Conway’s selected-scene commentary is the most interesting feature for the diehard fans, as it underlines, among other things, the staging and symbolism that foreshadow the famous reverse ending. Kim Newman’s video interview explores Diabolique’s lasting, often under-acknowledged influence on pop culture, including its influence on Psycho, which would go on to influence nearly every subsequent thriller. There’s also, of course, the trailer.

A little light on the extras, but this Criterion edition of a not-quite-famous-enough classic still merits attention.