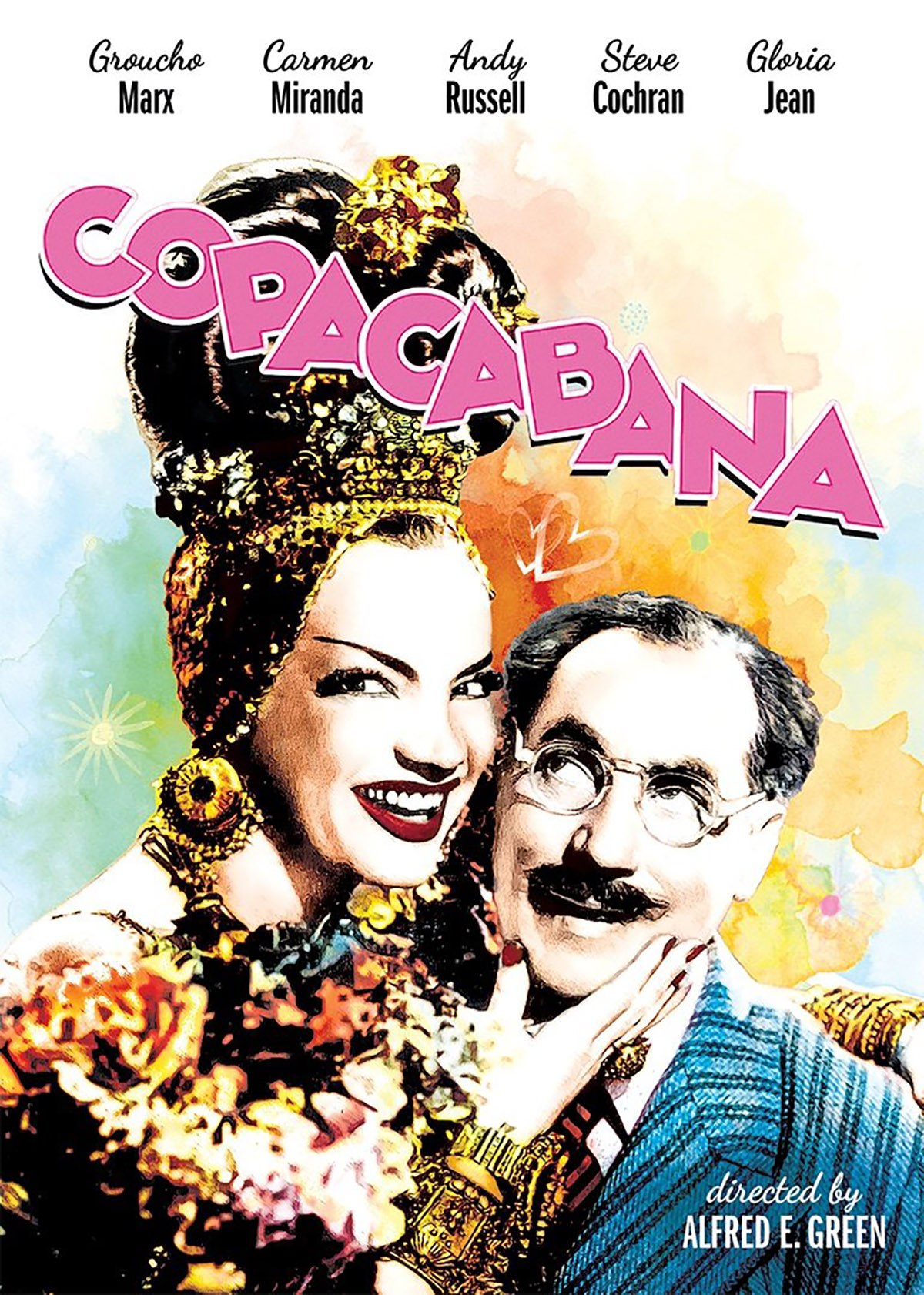 At the heart of the irreverent musical Copacabana is an ambivalent love-hate relationship with show business, a mix of muted emotions obscured partly by Groucho Marx’s witticisms and Carmen Miranda’s saucy performances. Copacabana may be a boilerplate rags-to-riches story, one frequently more interested in serving as a perfunctory entertainment vehicle (most notably for Miranda), but it’s also one of the most sardonic musicals of its era, and many of its jabs at the fake grandiosity and shameless chicanery needed to stay in the business are razor sharp.

Many of these zingers involve hustling performer-cum-agent Lionel (Marx) and his impudent stunts in advertising his fiancée Carmen Navarro’s (Miranda) singing talents, though the two get more than they asked for when auditioning for the Copacabana nightclub’s producer, Steve Hunt. In order to convince Steve he has more than one client, Lionel has Carmen dress up as a partially veiled French-Moroccan singer named Mademoiselle Fifi. Steve ends up liking both performers, but negotiates a firm deal with Lionel: He will only take both acts or none at all. That forces Carmen to quickly switch from one costume to the other and then back again as she juggles between the two acts each evening. It’s an absurd, though appropriate analogy to the hard work of any showbiz entertainer, and Copacabana deftly plays up the silly sensationalist melodrama that entails with the highly successful Fifi act: the mystery of a veiled woman proving more attention-worthy than other equally talented singers; the jealousy Fifi inspires in Steve’s receptionist, Anne, upon seeing how smitten her boss is with Fifi; and the difficulty faced by Lionel and Carmen in terminating the existence of their fictitious, though lucrative singer.

Marx is considerably the more prominent of the two leads with his frequently hilarious non sequiturs, but it’s almost like a front for the film’s subtextual critique about Orientalism in Hollywood. Notice how, while Miranda’s performances as both Carmen Navarro (in her signature fruit-hat costume) and Fifi are identical in quality, audiences prefer Fifi over the Brazilian singer. It’s not by accident that the film scripts this collective predilection for the more exoticized, more mysterious performer. Copacabana not only consciously acknowledges Miranda’s then-peaking career troubles, it criticizes viewers for seeing Miranda’s merits only through the gaze of Othering by showing the mania Fifi arouses in everyone, from the infatuated Steve to the effervescent praise of the critics (featuring real entertainment journalists playing themselves, including Abel Green, Louis Sobol, and Earl Wilson).

By 1947, Miranda’s career luster was fading in a parallel nose dive with the popularity of Hollywood musicals. As if to demonstrate that musicals had always been little more than airy-fairy escapist fare, the film at one point delves into a fantastical daydream of Anne’s, in which she finally attains Steve’s love by being his star performer. She sheds her homely, reticent secretary image for one of glamour and class as she confidently belts a lovely ballad in a glittering evening gown, only to be awoken by her boss. It was all a dream, but that’s exactly the point Copacabana gently posits, one cleverly hidden by Marx’s steady stream of one-liners. Sure, the gags are funny and the songs are wonderful, but this film, like any other, is pure fantasy and gimmickry, not unlike the greasepaint on Marx’s face or the fake fruit atop Miranda’s hair.

This is a nice update from Republic Pictures’ DVD release in 2003. Unlike earlier transfers of the film, one can actually discern the difference between Groucho Marx’s real mustache and the greasepaint job in his musical number! However, the image does still contain some intermittent fuzz and noise, a problem matched in its sound quality. The songs nicely soar and the instruments sound fine, but there’s some slight hissing on the vocal tracks, including dialogue. Nothing too alarming, but it’s noticeable.

As with many other DVD and Blu-ray releases from Olive Films, Copacabana unfortunately offers no special features.