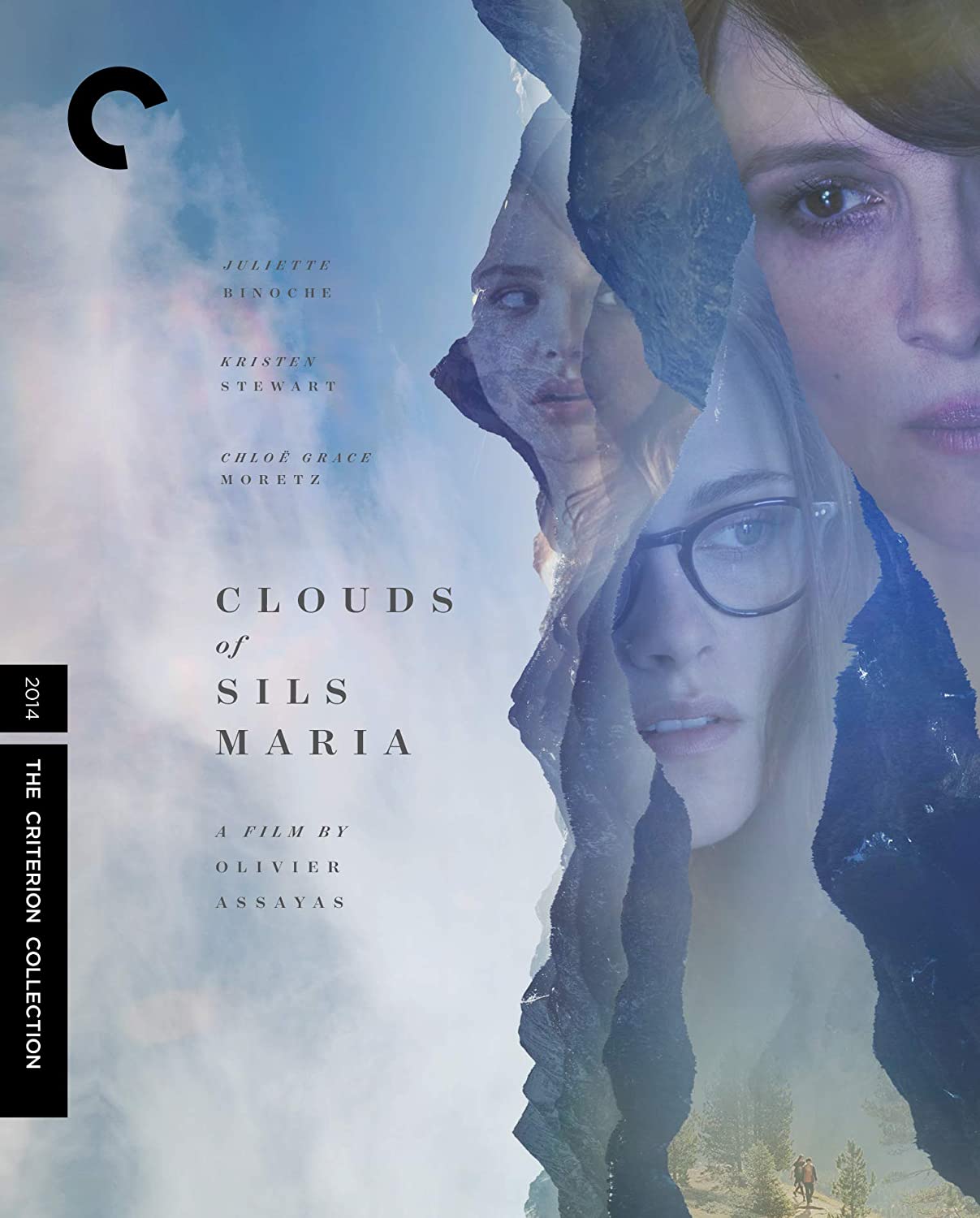 Olivier Assayas’s Clouds of Sils Maria concerns Maria Enders (Juliette Binoche), a renowned actress in the midst of professional and existential crisis. When Maria was 18, she appeared in a play about an arrogant young woman who casually destroys a female mentor in love with her, seemingly for her own amusement. Now she’s been asked to act in a revival of the play as the destroyed woman, this request literalizing her grappling with aging in an industry that forever prizes ingénues, pitting women young and old against one another in endless metaphorical cage matches. Of course, Maria’s actual life parallels that of the play’s protagonist, and the conditions of the film’s own production parallel these parallels. Maria is barely distinguishable from our idea of Binoche herself, an icon who’s tasked with sparring against Kristen Stewart, a newer global sensation who plays Maria’s assistant, Valentine, as an earnest mixture of employee and confidant.

Throughout the film, Binoche and Stewart forge a nuanced rapport, fluidly modulating symphonic outbursts with revealing silences, breathing mysterious energy into metatextual games that are self-consciously derivative of the films of Ingmar Bergman and Rainer Werner Fassbinder. When Maria laughs with insufferable haughtiness and condescension, Binoche allows us to understand that she’s at the cusp of panic, threatened by the young women encircling her, which include Valentine and rising actress Jo-Ann (Chloë Grace Moretz), a character who functions as a shrill and cruel caricature of Lindsay Lohan. Correspondingly, Stewart does something exceptionally difficult, indicating vulnerability and earnestness through aloofness, her eyes signaling a tentativeness that refutes her otherwise prodigious poise.

Maria and Valentine offer a singular portrait of a woman’s evolving artistic process. Maria is damaged by an impending divorce and by life in general; she has a master artist’s control, but that control might moot the kind of intuition and daring that Valentine admires in Jo-Ann. Valentine isn’t a professional actor, but she comes to serve as a proxy of both Jo-Ann and the tempestuous character that Maria once played, running scenes opposite of Maria with exceptional perception, allowing the older woman to work through the humbling transformation of playing the victim rather than the aggressor.

But Valentine insists that the young woman in the play is as vulnerable as the elder, alluding to her own agency as a youthful beauty tired of being denied the stature of her own uncertainty because of that beauty—a notion to which Stewart can presumably and viscerally relate. What Valentine requests is the acknowledgement of her own pathos, and to be taken seriously by Maria as a collaborator. Maria is at an embittered point where she can’t see that attractiveness, youth, and vulnerability aren’t mutually exclusive, and this failure of perception, a symptom of pain, is potentially limiting her art.

Binoche walks a risky tightrope. In the first act, Maria is glamorous and intoxicatingly sexy; in the following acts, presumably ravaged by the pressure to conjure the character she fears to symbolize her own future, she comes to resembles a regular woman rather than a goddess of theater and cinema. Meanwhile, Valentine grows more beautiful and quietly self-possessed. Additionally, Maria is the more “difficult” character, the one racked with unpleasant emotions, while Valentine is the appealing audience surrogate. The entire film is structured as a duet, or as a face-off that Binoche/Maria is intentionally meant to “lose” to Stewart/Valentine so as to fulfill themes pertaining to women in predominantly male-courted and –controlled entertainment, fame, aging, artistic transcendence, and self-laceration. For Stewart, this schematic also exerts pressure, as she’s risking the indignity of condescension by a veteran, of having a significant post-Twilight project “deferred” to her, which is to say that her winning could really be losing.

The best scenes in Clouds of Sils Maria luxuriate in Maria and Valentine as they smoke, drink, hike the beautiful Swiss mountains, and run lines, plumbing themselves and their sexual tension with one another under the context of mining the play, or vice versa, as Assayas contrasts the women’s respective physicality and cultural essences, most memorably when they go swimming. Maria, more experienced and daring, sheds all of her clothes with graceful weariness, while Valentine, who already feels exposed, both empowered and endlessly scrutinized, maintains cover.

Yet, for all the talent and ambition on display, Clouds of Sils Maria is airless and oppressively structural. Assayas has Maria’s problem: He’s a master craftsman unable to locate the unruly pulse of his art. One senses that every element of each scene has been fastidiously arrived at and achieved, such as the fact that Maria shares her name with the Swiss village of the titular setting. It’s poignant when Valentine disappears into the mountains, just as a character does in the play within the film, but it’s also fussily prescribed—an easy confirmation of the oft-noted inseparability of life and fiction.

Assayas’s images are characteristically chic, hard-edged, angular, and multi-planed. The editing hypnotically weaves the shots together, evoking the rarefied cocoon in which these women live, complementing the reductive point Assayas makes about the callous, mercenary dimensions of a global market both united and distanced by the Internet. But the formalism comes to suggest a kind of art-film coffee table book, offering an unintentionally ironic monument to well-honed taste that renders the film’s obsession with emotional detachment peculiarly un-self-aware.

Compared to the sensually unhinged films of Bergman and Fassbinder, or to Queen of Earth or the astonishing Kate Plays Christine, which offers terrifyingly raw and empathetic glimpses into the process of acting and its effect on identity, opening portals within portals of consciousness, Clouds of Sils Maria feels hermetic and self-congratulatory. There’s little sense of surprise or discovery, only of a proof being checked and affirmed: that Maria’s art matters, that age hasn’t only its embarrassments, but its dignities, and that transcendence is achieved per the banality of shedding trauma.

The transfer boasts breathtaking clarity, particularly in the film’s gorgeous images of the Swiss mountains. One feels as if they can reach out and touch the valleys and mountaintops, with their vivid cracks, edges, and points. The colors are lush, offering testament to Olivier Assayas’s facility for using them to succinctly establish differences of location. The train in the beginning is defined by comfortable earthy hues, while the plush hotels are informed by rich blues and metallic silvers that connote alienating privilege. Water in certain sequences has a shimmering, translucent authority. Most importantly, the film is a study of Juliette Binoche and Kristen Stewart’s bodies and faces, which are also presented here with merciless and celebrating exactness of detail. One can parse individual pores and strands of hair, wrinkles, creases, and the textures of worn clothing. The soundtrack is well-modulated, most effective in rendering a variety of acutely small effects—such as the sound of someone searching Google on their phone—that cumulatively forge a diegetic score of 21st-century communication.

The interviews with Assayas, Binoche, and Stewart offer revealing context pertaining to their work together. Assayas mentions the film’s relationship with Rendez-vous, an important early collaboration between Assayas, Binoche, and André Techiné, and the inspiration that the films of Bergman and Fassbinder had on the project, particularly The Bitter Tears of Petra von Kant, to which the play within Clouds of Sils Maria bears a resemblance. Binoche and Stewart talk about the parallels between their relationship and that of their characters, comparing and contrasting their methods. Stewart doesn’t like to rehearse (neither does Assaysas, who films his rehearsals), while Binoche prefers to run lines and gradually find the core of her characters. This distinction, between instinct and self-conscious craftsmanship, is the thematic heart of the film, and the three artists wax eloquently on the struggle to revise something without losing its emotional purity. Rounding out this slim but nourishing package is the theatrical trailer, a booklet featuring an essay by critic Molly Haskell, and, most distinctively, portions of the haunting footage from Cloud Phenomena of Maloja, a 1924 silent documentary by Arnold Fanck that’s seen in Clouds of Sils Maria.

Clouds of Sils Maria is pat and self-conscious, though it’s certainly a remarkably acted formal object, beautifully preserved by Criterion and accompanied with a few shrewdly chosen supplements.