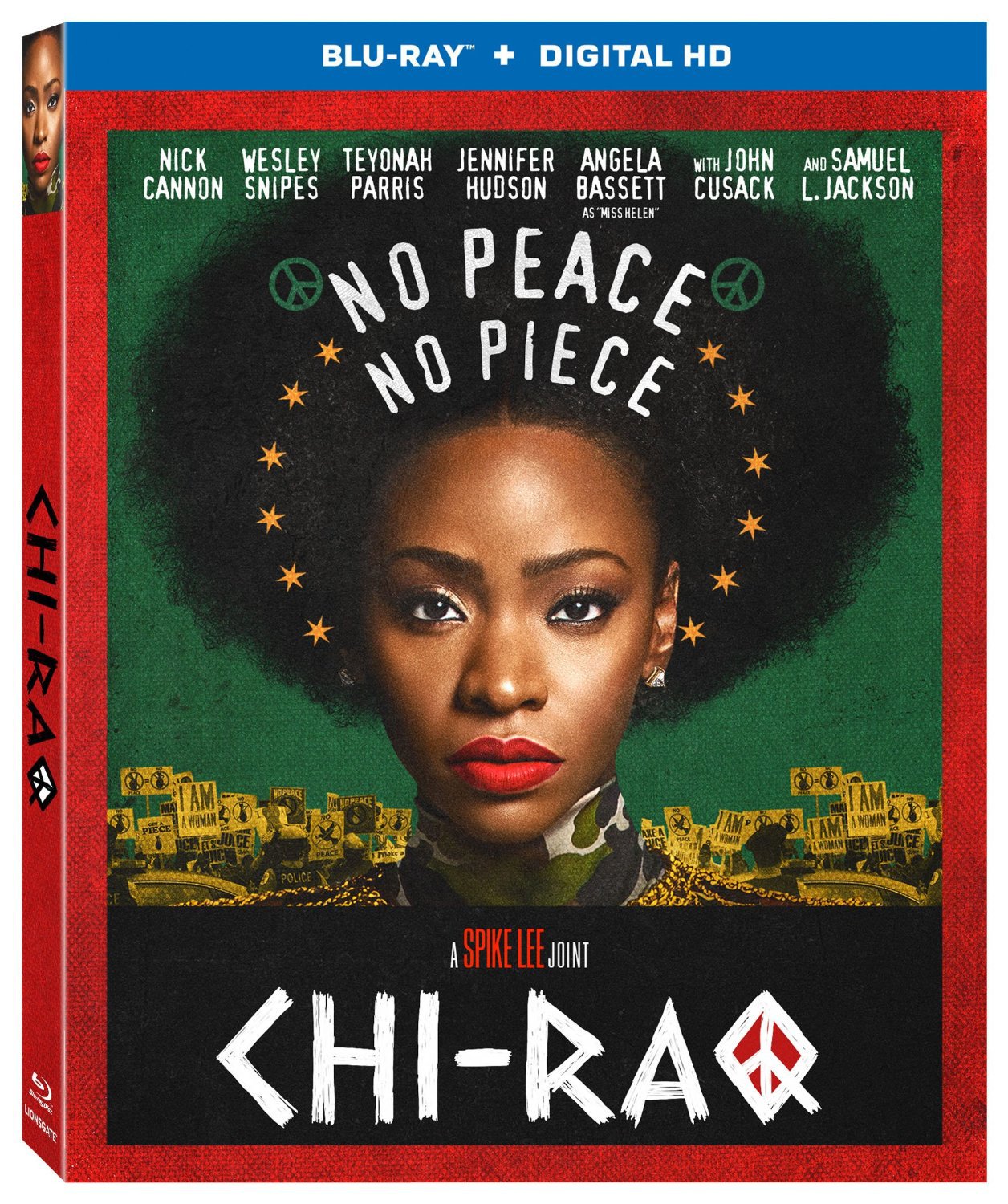 Artists, as opposed to sensationalist technicians, understand violence as a transmission of energy that’s repulsive yet hypnotic. There’s a reason people slow down to watch highway accidents or street brawls, or reliably patronize gory blockbusters or TV series. No contemporary American filmmaker grasps—or channels—this conflict of the rational (moral judgment, or superior pretense thereof) and the irrational (fearful animal urge to get off on annihilation) more vividly than Spike Lee, who’s in the midst of a fertile creative cycle that began with Red Hook Summer.

Now working on lower budgets, Lee has refined his aesthetic into a kind of hothouse poetry of compacted excess. His cinema is presently a series of contrasts and frictions: between large and small scale (the latter often symbolizing the former), and reverent and irreverent tones. The chief ambiguity of the filmmaker’s work, though, is his attitude toward violence, and its intermingling with the sexual tension existing between the over-charged men and manipulative women that populate his cinema.

Chi-Raq, Lee’s most daring film since Bamboozled, is a liberal message movie staged as a fusion of graphic novel, music video, musical, action film, meathead comedy, August Wilson play, and chamber sex drama—all under the umbrella of contemporizing Aristophanes’s Lysistrata, an ancient Greek comedy that pivots on women withholding sex from men in an attempt to instill peace in their land. A fleeting paraphrasing of Walter Hill’s The Warriors late in the film isn’t incidental either, as Lee is courting and achieving precisely that sort of heightened, formally amazing, morally destabilizing force.

The first 10 minutes of Chi-Raq have so much invention and primal eroticism that one wonders if Lee will be able to fulfill the promise they set forth, which is of a film in which essentially anything is possible. Lee opens on a black screen, with an outline of the United States that’s filled in with graphics of firearms, the shape of Chicago assuming prominence in the frame. The lyrics to Nick Cannon’s “Pray 4 My City” soon replace these images as the song plays over highlighted words, such as “peace.” The cathartic power of this device—of forcing us to listen to the song, taking its despair in as modern overture before the narrative officially commences—is ineffable. It suggests a flat-line cleansing, of a diseased society puking these words up through an anguished death rattle.

Obliterating subtlety, Lee floods the frame with the words “This is an emergency,” before offering the audience statistics comparing the American deaths in the Iraq and Afghanistan Wars with the death tolls on Chicago’s crime-ridden streets—a juxtaposition that’s led to the city’s titular nickname. Terence Blanchard’s score kicks in, jarringly switching emotional registers, pulling us away from mournfulness, lulling us into the bass-y, booty-gyrating rhythm of a nightclub in peak, swinging frenzy.

An elevated train tears through Chicago, and Lee follows it until the camera hops off the tracks, moving into a club where a performer, also called Chi-Raq (Cannon), works his crowd up into violent, orgiastic fervor. The club-goers, mostly young, black, fit, and attractive, their muscles and curves ferociously glowing with sweat, move with a stylized syncopation that’s distinctive to Lee’s grasp of movement within the frame. The filmmaker uses the shorthand he’s honed in music videos, his facility for blocking every actor to move as one singular pulsating force, to convey the potential for bloodshed as a socially contaminating kind of foreplay.

Lee never shirks away from the appeal of criminal life, which can be most broadly summed up as a gaining of control, as an act of franchising in a country that’s disenfranchised most anyone who isn’t born in the right suburb with the right political connections. What sort of straight, legal job could Chi-Raq hope to get, particularly in a society where even suburban white folks with a college degree can barely find work? Yet, in this club, purposefully exacerbating a conflict into murder, Chi-Raq is a god, worshipped by the beautiful Lysistrata (Teyonah Parris).

This sequence precedes a film that’s even looser than one might initially anticipate. Chi-Raq also takes the revue form as one of its many sources of inspiration, offering a series of sketches and set pieces that circle and occasionally nest within one another. The film’s prevailing subject is gun violence, and the American government’s refusal to combat it, along with its refusal to spend money bolstering the severely damaged infrastructures that lead to violence, such as gutted inner-city schools and hospitals. Though there’s plenty of money for high-tech, privatized prisons, or, in the film’s parlance, “the new Jim Crowe.” As a pointedly white Englewood priest, Father Mike Corridan (John Cusack), says during a powerful oration, it’s easier for many inner-city children to get a gun than a laptop.

Lee pushes his subjects so bluntly into the audience’s faces as to render them oxymoronically subtle. This is an emergency, after all, yet that doesn’t mean that Lee will deny us spectacle. The filmmaker doesn’t regard his loaded, politicizing issues with the pompous religiosity of a typical Oscar-winning “issue” film that tells one what they want to hear, congratulating them on their appropriately guilty liberal laurels. (There are choice words in Chi-Raq for beloved liberal talking points too, such as the misleading unemployment rate.) Those types of films often narcotize “issues” with insidiously distancing good taste; Lee’s film energizes and enlivens, its shifting formal qualities approximating a refusal to indulge retrospection at the expense of the urgent now, embracing luridness as humane straight-talk.

Chi-Raq is charged with trashy, genre-film vitality. When one hears that Spike Lee is making a film about the epidemic of gun violence in America, one doesn’t necessarily expect to encounter a farcical scene in which D.B. Sweeney plays a mayor who implies to a commissioner, played by Harry Lennix, that he might have to fuck him if the latter doesn’t resolve Lysistrata’s global sex strike. One’s clearly aware of Lee’s grasp of who is and isn’t wielding power in the scene, and the respective racial identities of said parties, but the shock of this moment springs from its tone, which is broad and as misleadingly weightless as a glib joke from a frat comedy like Animal House. The spectrum of the scene’s implications hits you on the rebound, and this moment is complemented by a similar exercise in sex, class, race, force, and farce between Lysistrata and a bigoted armory commander, King Kong (David Patrick Kelly).

Lee has stretched his tonal range this far before, in Bamboozled, which criticized race representation in mass media when it was less fashionable to do so, but that film’s nihilism somewhat dulled its ability to surprise, encouraging its viewers to enter a state of defensive resistance. Chi-Raq is warmer, softening one for the kill. Lee’s empathy and prodigious command of the dozen or so tones and formal devices that he’s juggling imbue the more traditionally cautionary moments with a renewed ability to sting. One expects to see a mother weeping on the street in this sort of gangster film, but when Jennifer Hudson’s character scrubs her slain daughter’s blood off the asphalt, the grit of her fingernails audibly brushing the street, there’s a sense of chaos, of true, platitude-shattering violation. This scene doesn’t belong next to moments of high comedy or arousing sex-play. And that’s the point.

Chi-Raq detonates the massaged politeness of the traditional three-act drama, doing what it has to do to be seen and heard in a wasteland of unending cultural stimulation. Anything can happen: fourth walls can break, identities can shift, verse can rhyme, and Samuel L. Jackson can rediscover himself playing a mack daddy MC who’s the swingiest of the swinging even by his considerable standards. The film embraces free-associative stream of consciousness as an intuitive evolution of protest art.

Colors are luscious and vibrant, particularly the reds that Spike Lee and cinematographer Matthew Libatique so often favor. Skin textures are minutely detailed, as one can discern the wrinkles and pores on the actors. The compositions pop with impressive depth and variation of grit. Image clarity is pristine without succumbing to a scrubbed digital blandness that occasionally mars home-video presentations of modern films. The sound mix is immersive, nuanced, and appealing to the ears, balancing percussive resonance with an acute heightening of subtle and pivotal diegetic effects, such as the aforementioned scraping of fingernails against pavement.

The deleted and extended scenes aren’t of much interest on their own, though aspiring filmmakers may enjoy the elaboration they offer on Lee’s approach to pace and structure. Particularly how certain scenes, in longer form, are revealed to be less stylized than their final-cut counterparts, their shaggier running times lending them a dimension of naturalism, most notably in the rhythm of dialogue delivery. The featurette about the making of the film is just a short promo piece. Rounding out this slim package is the music video for Kevon Carter’s “We Gotta Do Better.”

This bold, imaginative, infuriatingly neglected work of expressionist agitprop receives the gorgeous transfer it deserves, though it’s accompanied by a slim and obligatory supplements package.