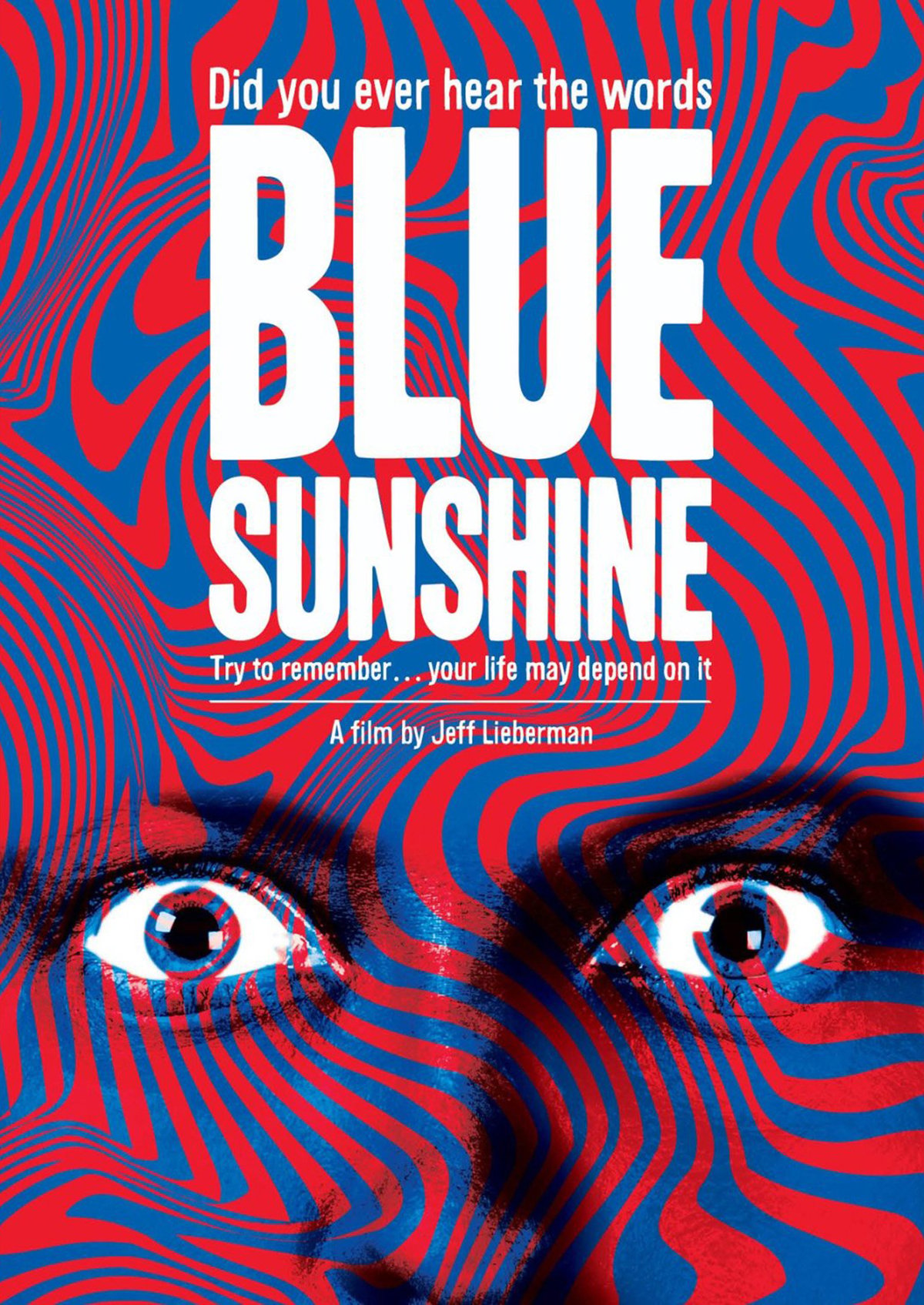 A hippie-era hangover and acid-tongued denunciation of political-commodity fetishism, Blue Sunshine remains an unjustly neglected genre classic that delivers a deft fusion of horror-movie tropes, social satire, and cult-film weirdness. The premise is, in every sense of the word, fantastic: A group of ‘60s-era college types who tripped out on the eponymous batch of LSD succumb to “chromosomal damage” 10 years later, lose all their hair, and turn into homicidal lunatics. By flipping the script, taking the U.S. government’s horror stories about acid usage at face value, writer-director Jeff Lieberman elaborates on a scenario that interrogates the counterculture’s mythic appraisal of its own legacy, while at the same time sticking it to middle-class conformism and suburban anomie.

Before the opening credits are even over, a series of vignettes has introduced most of the film’s characters and adumbrated its principal themes. Dr. David Blume’s (Robert Walden) cancer-riddled patient tells him he doesn’t look so good. Housewife Mrs. O’Malley complains to her next-door neighbor about her husband John’s bad dreams, hard drinking, and hair loss. Babysitting her friend’s two children, Wendy (Ann Cooper) watches a paid political ad for her ex-husband, aspiring politico Ed Flemming (Mark Goddard). The ad copy runs: “In the 1960s, Ed Flemming and his generation shook up the system. Now he’s working within it.” Revolution quickly turns to accommodation and collaboration. Later Flemming speeches emphasize his rhetorical hollowness, mouthing empty motivational platitudes like “We can and we must! We must and we will!” Branding himself as the future, Flemming is ready and willing to capitalize on selling out the past.

The subsequent scene introduces viewers to Blue Sunshine’s hero, career peacenik Jerry Zipkin (played by future softcore producer Zalman King), and his girlfriend Alicia (Deborah Winters). The warm, inviting cabin setting could have been lifted straight from The Big Chill save for its ambience of free-floating oddity: Partygoers mingle and small-talk in front of a flickering hearth. All of a sudden, a man (Brion James), suffering it seems from some sort of flashback, goes into his best Rodan imitation, flapping his arms and squawking around the room. Coming down the stairs, host Frannie Scott (Richard Crystal, Billy’s baby brother) launches into a Sinatra number. When he gets fresh with another man’s date, the indignant fellow grabs him, tearing off his wig in the process, revealing a bald pate spotted with tufted hair. Frannie runs away into the woods and his friends head out in search of him. When he later returns to the cabin, now occupied only by three women, he proceeds to run amok, beating the women senseless and stuffing them into the fireplace, a terrible crime that the police end up pinning on Jerry for wont of contrary evidence. Hence the film owes an obvious structural debt to Hitch’s trademark wrong-man motif.

Wounded and hounded by the police, Zipkin tracks down old friend Dr. Blume for medical treatment. Stealing one of Blume’s three-piece suits (his idea of adopting a disguise), Zipkin sets out to discover why Frannie Scott went off his nut. The trail will soon lead straight to drug dealer turned congressional hopeful Ed Flemming and his right-hand man, college football hero Wayne Mulligan (“big No. 32!”). But not before Zipkin reads in the paper that John O’Malley slaughtered his entire family, his next-door neighbor, and even the man’s dog. Zipkin breaks into the O’Malley house to investigate the crime scene, which comes alive in his mind (a la Manhunter), a maddening mix of piteous screams and dog howling looped on the soundtrack, culminating in an imagined confrontation with the perpetrator. Jerry’s response to the violence and bloodshed is hyperventilation, suffering a panic attack. He’s into peace that much. Incidentally, the exteriors for this scene were filmed on the same suburban block that providing the setting for Wes Craven’s A Nightmare on Elm Street.

Lieberman reuses this simple yet effective audio montage technique when Wendy Flemming goes mad. Hallucinating a crescendo of children screeching her name over and over, interspersed with clamorous calls for hot dogs and Dr. Pepper, she tries in vain to stave it off by swallowing handfuls of Anacin. Giving in at last, she goes after the kids with a butcher knife. Later, Zipkin waits for Blume in Echo Park, hoping to score some tranquilizers he hopes will be enough to take down a rampaging maniac. A junkie (Jeffrey Druce) takes him for a fellow traveler, sidling up to him in commiseration. When Jerry’s spooked by a bald weirdo, who resembles a cross between the lead singer for Midnight Oil and Pluto from The Hills Have Eyes, the junkie scares him off by bawling “Get outta here!” in his face until he does. According to Lieberman, it was an impromptu moment, created on location, and it exemplifies the disorienting, borderline surreal touches, unmotivated and even unwarranted by the strict exigencies of story, that build an atmosphere of pervasive abnormality.

Speaking of atypical, lead Zalman King turns in a bizarrely binary performance, vacillating between doing next to nothing, whispering his lines, twitching like a drowsy epileptic, and dialing it all the way to 10 for full freak-out intensity. Mannered doesn’t even begin to describe him, yet somehow it all comes together, in tandem with the thorough-going elements of grotesquerie described elsewhere.

The mind-blowing conclusion takes place at Shoppers World, one of the first suburban mall complexes, the setting for Ed Flemming’s election eve “get out the vote” spectacular, complete with Barbra Streisand and Frank Sinatra puppets providing featured entertainment. As in George A. Romero’s Dawn of the Dead, the mall is where we go because we don’t know any better, the likeliest place to be sold a bill of goods, whether it passes for pleasure or policy. (In an earlier scene, when Wendy and Jerry discuss her ex, he says, “I saw him at a rally last week. He’s an excellent salesman.”) While Jerry keeps an eye on Ed, Alicia meets big Wayne Mulligan at Big Daddy’s, a discotheque attached to the mall. Unfortunately for her, Wayne’s about to lose his hair and his mind. In the film’s funniest scene, Wayne demolishes the disco, terrorizing the dancers and tossing them around like ragdolls. He picks up one girl and throws her into a cluster of patrons. Alicia has to seek shelter in the DJ booth, the colored strobe lights forming abstract patters across her face, while Wayne rages. Talk about your panic at the disco! When the alarmed customers flee past the Flemming rally, one of the disco fugitives delivers the punchline: “There’s a bald maniac in there and he’s going batshit!”

Chasing Wayne through an empty department store, Jerry gets the drop on him with a tranquilizer dart. Jerry’s evolution over the course of the film from sweater-clad swinger to ersatz gunslinger, as well as his involvement with the inner workings of a political campaign, plays like a dim parody of Martin Scorsese’s Taxi Driver. In the film’s final shot the camera tracks back along one of the aisles, and superimposed titles inform the viewer with mock solemnity that, according to the findings of a specially convened DEA task force, over 200 doses of Blue Sunshine LSD remain unaccounted for.

The transfer appears identical to the remastered, uncut version produced for the 2003 Synapse Films release. Lamentably, the New Video edition features only the Dolby 2.0 stereo track, not the pumped-up Dolby 5.1 remix available on the Synapse disc. The picture can get grainy and soft in low-light conditions, and artifacts and blemishes are still plentiful, but otherwise it’s eminently watchable. The Dolby stereo track conveys dialogue tolerably, but when it comes to putting across Charles Gross’s eerie gong-and-string score, let alone “Disco Blue” bump-and-grind, the remix is sorely missed.

Barebones compared to the Synapse release. Since the new 40-minute interview with the writer-director covers much the same ground as the 2003 version, discussing the genesis of Blue Sunshine, haphazard filming conditions, and the current state of the horror genre (with particular attention to the cult of the cash-in remake), it’s fortunate that Jeff Lieberman remains a lively and amusing tour guide. The only other supplement, an attenuated photo gallery, offers a closer look at the pictures Lieberman displays during the interview.

As Blue Sunshine would have it, all those naked, mud-spattered freakniks at Woodstock might have been better off if they had just eaten the brown acid after all.

DVD Review: Visions of Eight Is a Stylized Look at the 1972 Summer Olympics