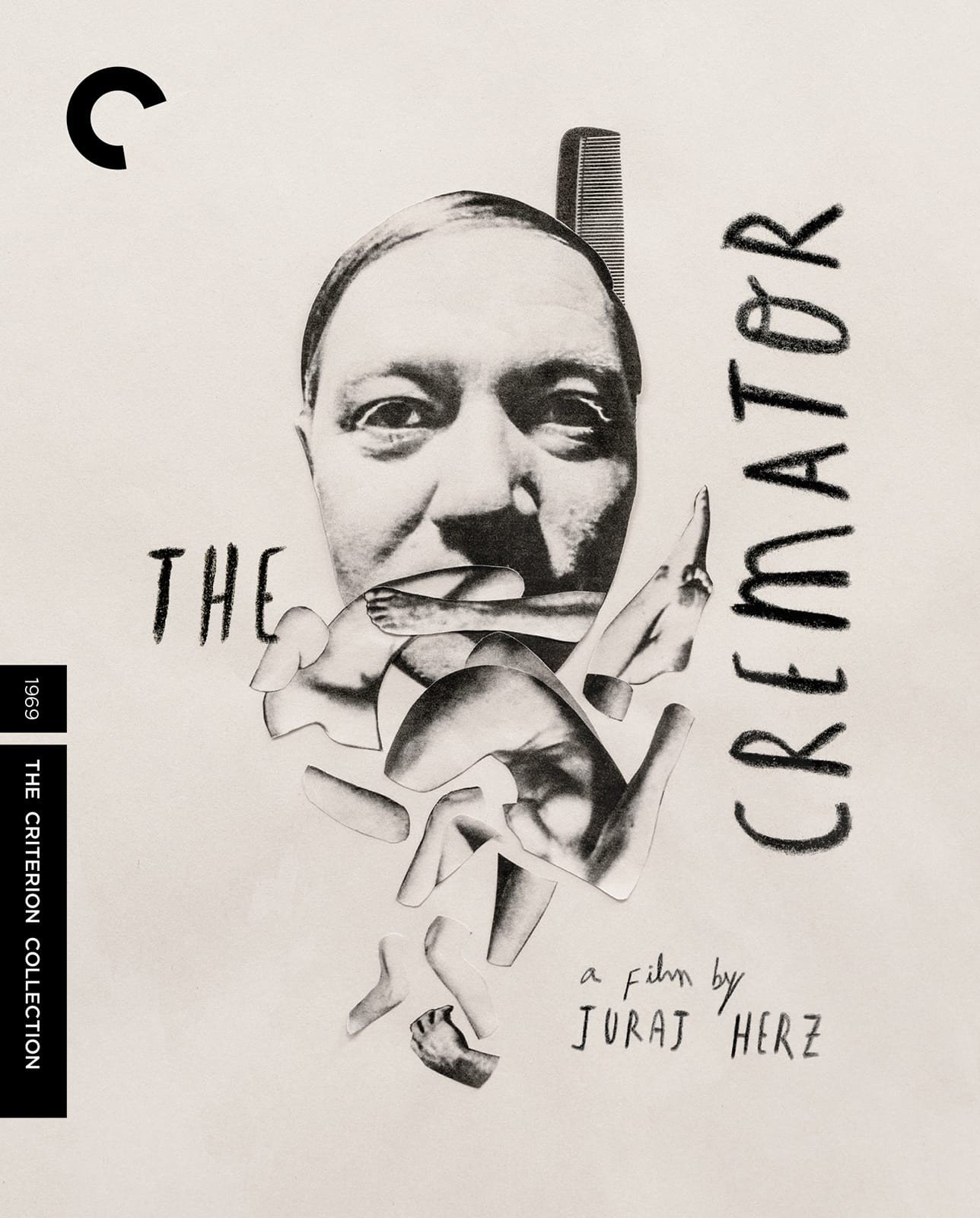 Juraj Herz’s The Cremator is something of an outlier among the films of the Czech New Wave. The movement was largely defined by naturalistic and quietly observational aesthetics, but Herz’s breakout film employs a number of attention-grabbing formal devices—rapid-fire editing, distortive fish-eye lenses, spatially disorienting transitions between scenes—with the express purpose of placing the viewer squarely in the increasingly demented headspace of crematorium worker Karel Kopfrkingl (Rudolf Hrusínský). In this way, The Cremator can be seen as a natural extension of cinematic expressionism.

We first meet the Kopfrkingl clan by the predator cages inside the Prague Zoo. Rhyming shots of Karel and the pent-up animals establish an equivalence when it comes to their respective rapacity. A brief shot of the Kopfrkingl kids, Mili (Miloš Vognič) and Zina (Jana Stehnová), seen behind the bars of a cage suggests that the nuclear family is little more than a prison. The entire opening scene works well as both intellectual montage, with its numerous shots and dense editing indicating some of the film’s principal themes and subsequent narrative developments, and as an evocative prologue to the rest of the storyline.

The Cremator unabashedly mashes together multiple moods and genres. It’s a black comedy, a psychological horror movie, and a cautionary fable about the ruthless quest for success and power within a political party. Set in the late 1930s, the party in question happens to be the Nazis. But the film’s most subversive stance is the way it proposes that all parties are alike in this regard. It accomplishes this by way of a visual leitmotif: a recruitment pamphlet that turns up time and again, each time inviting recipients to join a different organization.

Karel is a joiner, but also a conformist. Though he enjoys bloviating before friends and relatives, his words are often borrowed wholesale from elsewhere, echoing by rote the opinions of someone with greater authority or prestige than his own. This is nowhere used to more chilling effect than when Karel draws some dangerously wrongheaded notions from an illustrated travel book on Tibet, where they believe that death is a blessed release from suffering, and thus something devoutly to be wished. Kopfrkingl’s conformity, however, is just one of the keys to his success as a member of the Nazi party. His other major asset proves to be his unfazed ability to turn on friends and relatives with relatively little provocation, denouncing them for offenses that are, more often than not, entirely imaginary.

But when it comes to the fate of his own family, Karel is a hands-on sort of guy. It’s in these scenes of the patriarch turned murderous “liberator” that The Cremator most queasily treads the line between horror and black comedy. After he hangs his wife, Lakmé (Vlasta Chramostová), from a vent in their ultramodern bathroom, one of her untied shoelaces dangles limply, only to serve as a desultory plaything for the family cat.

Over the course of two fateful Saturdays, when the crematorium is closed for business, Karel takes one of his children on a tour of the facilities, where he’s keen to introduce them to the working end of a heavy iron bar. Poor Mili succumbs instantly, with only a mewling “Papa!” as protest. The fate of his feistier daughter is left troublingly up in the air as the film moves into its final moments, an apotheosis of utter insanity to which Karel almost joyously succumbs.

Criterion’s 4K restoration of The Cremator looks fantastic, constituting a noticeable improvement over the already fine-looking 2017 Blu-ray from Second Run, and really bringing out every nuance of Stanislav Milota’s moody monochromatic cinematography. The image seems a bit brighter, possesses greater clarity and depth, and contains more information on the bottom and righthand edges of the frame. The LPCM mono audio track is clean and clear, and gives some welcome heft to Zdeněk Liška’s gorgeously wrought score.

Criterion stacks the deck with a handful of excellent bonus features. First up is a short documentary from 2011 that shows director Juraj Herz revisiting two different crematoria that were used during the filming of The Cremator, discussing different elements of the production along the way. In an on-camera interview, film programmer Irena Kovarova provides plenty of information on Herz’s early career studying acting and then puppetry under the great Czech animator Jan Švankmajer, Herz’s incorporation of genre tropes into his films, and the striking photographic and editing techniques used in The Cremator. Kovarova also divulges some tantalizing tidbits about a now-lost alternate ending to the film.

A career retrospective documentary about Liška contains copious clips from films he scored, and talking-head commentary from Herz, Švankmajer, the Quay brothers, and musician Andy Votel, whose Finders Keepers Records have issued several soundtracks by Liška. Also included here is a charming profile of actor Rudolf Hrušínský, the “Czech Jean Gabin,” as filmmaker Jiří Menzel refers to him at one point. Filmed a year before the actor’s death in 1994, it offers a backstage glimpse into Hrušínský’s homelife as well as his thoughts on the craft of acting and the arc of his career. Rounding out the video extras is a solid HD transfer of Herz’s 1965 debut short, The Junk Shop, an absurdist fable about a paper-recycling facility and its bizarre denizens that was also scored by Liška. The enclosed booklet contains an essay by film scholar Jonathan Owen that situates The Cremator firmly in the context of the Czech New Wave.

Mixing up moods and genres with delirious abandon, Juraj Herz’s incendiary The Cremator shines a light on one man’s ruthless quest for power.