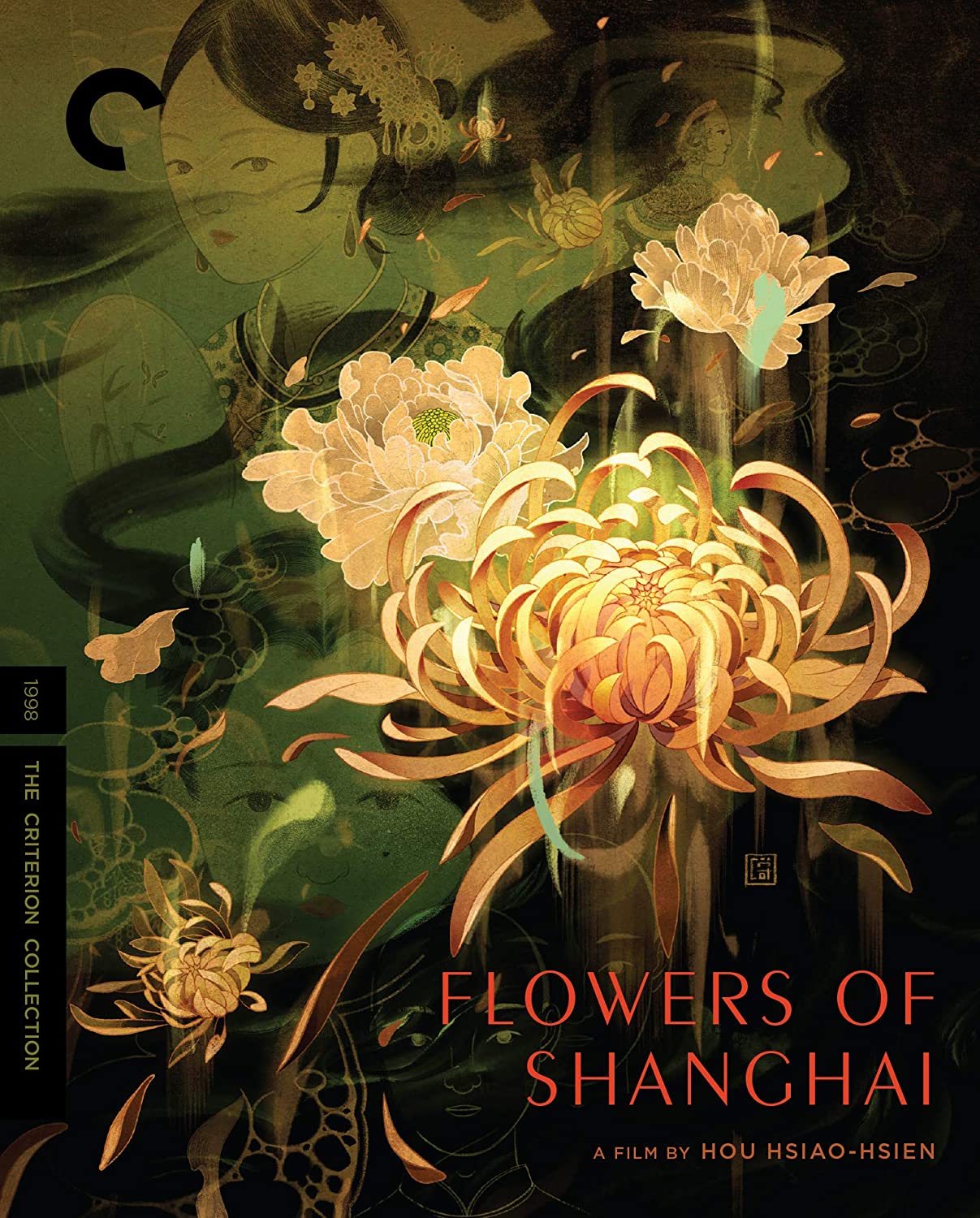 One of the first things one notices about Flowers of Shanghai is Yoshihiro Hanno’s score. An adagio drone of string and pump organ punctuated by gong hits and the occasional sound of a distant march beat, the main theme layers two countermelodies over a pair of suspended organ notes, creating a sluggishly evolving pattern of tension and release, and Yoshihiro’s other pieces in the film share a similarly languorous mood and circular structure. There are no pulse-raising swells, rhythmic or key changes, or other distinguishing dramatic effects—all the better to submerge the music in the mix, rendering it as ubiquitous an atmospheric element as the opium clouds that waft through the 19th-century brothels in which the entirety of the film’s action takes place. While the score’s effect is largely textural, almost disappearing into the film over time, it nonetheless stands out for the peculiarity of its near-constant application.

Flowers of Shanghai operates on the whole much like Yoshihiro’s music, filling your senses like a thick haze, holding you rapt without petitioning for your attention. Director Hou Hsiao-hsien describes the one-shot-per-scene formula of the film as resurrecting the sensorial experience of Han Bangqing’s 1892 source novel, The Sing-Song Girls of Shanghai, and the effect of the film’s torpidly moving camera is akin to spectating unseen on the everyday lives of the courtesans and callers of the late Qing dynasty—less fly on the wall than ghost in the room. Scene after scene is captured with a medium focal length lens on a dolly that rarely stops floating back and forth, with cinematographer Mark Lee Ping-bin transforming each long take into an ever-evolving series of subliminal reframings. The fluid movement creates a perception of immersion, yet the absence of editing leaves only a circumscribed perspective on the action. That Hou left much of the specificity of this camerawork up to Lee’s whims belies not only his instinctual trust in his collaborators, but also a certain humility regarding the representation of history: We can only presume to see and know so much.

That same modesty extends to the film’s selective storytelling, which whittles Han’s dozens of characters down to a much smaller group, then reveals only fragments of their lives, fractured by mysterious ellipses communicated in lengthy fades to black, over an indeterminate amount of time. Hou focuses on four sought-after concubines, each identified by their respective “flower houses”: Crimson (Michiko Hada) of the Huifang Enclave, Jasmin (Vicky Wei) of the East Hexing Enclave, Jade (Hsuan Fang) of the Gongyang Enclave, and Emerald (Michelle Reis) of the Shangren Enclave. The naming of these women after jewels offers opportunity for subtly color-coded mise-en-scène and production design courtesy of Huang Wen-ying, while also more broadly speaking to the essentially decorative function these characters served in imperial society, where looking anything less than lavish and shimmering wasn’t an option. (Hou, accordingly, never shows moments of unguarded privacy among the flower girls, where their attire and living quarters are not as immaculately presented as possible.)

Flowers of Shanghai, however, like Kenji Mizoguchi’s fine-grained studies of Japanese pleasure quarters, probes much deeper than a mere statement on the dehumanization of women in a male-dominated society. As presented in the film, the brothels take on an oddly familial quality, with regular clientele embarking on long-term relationships with the courtesans more for romantic attention than sex, and the brunt of the management of (and cruelty toward) the women carried out by the elder “aunties” who run the establishments.

The film’s unexpected points of emphasis are exemplified by its prolonged attention on Master Wang (Tony Leung Chiu-wai), a long-term lover of Crimson whose feelings are drifting toward the younger Jasmin. Leung plays the mysterious Wang with an introversion that alternately evokes opium-fueled dreaminess and barely concealed intensity; whatever the case, Master Wang doesn’t seem at peace with himself or the world he occupies. In the film’s most startling disruption, precipitated by an uncharacteristic point-of-view shot, he lashes out at the décor after having witnessed a possible act of retributive infidelity by Crimson, an outburst of childish violence for which he will have to pay a (literally) hefty price.

As the glue that binds this decadent institution together, money is never out of sight in Flowers of Shanghai. A scene in which damages are assessed following Wang’s implosion is paralleled throughout by recurring scenes of Emerald engaging in negotiations with her auntie (Rebecca Pan) for her freedom from the courtesan life, a prospect which commands a much higher value than the woman bargains for, resulting in her calling upon her patron, Master Luo (Jack Kao), to help her finagle a more favorable price. Meanwhile, after a botched attempt at carrying out a suicide pact estranges her from Master Zhu (Simon Chang), the impressionable Jade receives a generous sum for both her freedom and a future dowry. These sequences of meticulous accounting fill space that might otherwise have been occupied by more salacious moments of sex and violence (moments that the viewer hears about but almost never sees), and the overwhelming implication is that it’s money, more than any fiery passions between individuals, that really dictates the ebbs and flows of behavior within this milieu.

Three years after Flowers of Shanghai, Hou would release Millennium Mambo, a film with a similarly caustic take on the corrosive impact of money on male-female relations, though set over a century later. In that film, a young woman’s escape from a vortex of nightclubbing, alcohol, and a domineering boyfriend comes via the wallet of a nurturing gangster, whose arrival corresponds roughly with the film’s shift away from stuffy, dimly lit interiors into bright winter daylight. The sun only penetrates the sepulchral brothels of Flowers of Shanghai a few times—most significantly when Emerald is making headway in her negotiations—but the camera never leaves this hermetic world, where hallways and stairwells in the backgrounds of shots imply a way out even as the uniformity between the courtesans’ costuming and the interior design suggests an intractable bondage. This withholding of catharsis, coupled with the repetition of the musical themes, induces a hypnosis that’s equal parts lulling and stifling—a condition that might also be said to hold sway over those who enter, and those who remain stuck, between the flowers houses’ forbidding walls.

The oil-lamp glow of Flowers of Shanghai, offset by patches of deep blue moonlight in windows, is one of the richest visual schemes of Hou Hsiao-Hsien’s career, which makes it a natural fit as the first of his films to vault into the Criterion Collection. Lustrous and moody without ever looking dim or unvaried, the transfer honors the film’s infinite shades of red and orange while giving the complementary colors a vibrant pop. Shadows, of which there are many, are deep and dark but never murky, and the light sources glimmer radiantly without blowing out. As in many of Hou’s films, the soundtrack leans toward the ambient, giving as much credence to ambient sound as to dialogue and treating the score almost like another reverberation in the environment. This disc’s mix balances all of that while preserving the intimacy of the many one-on-ones between the characters.

This being Hou’s Criterion debut, a discerning enthusiast would naturally want as many extras as possible to help elucidate this master filmmaker’s mysterious methods, and in that sense this release is a slight disappointment. There are only three supplementary video pieces, though they’re all very much welcome. The standout is a behind-the-scenes documentary, Beautified Realism, that charts the making of Flowers of Shanghai, offering ample candid footage of Hou and his collaborators at work on set and interviews with the key players (production designer Huang Wen-ying, cinematographer Mark Lee Ping-bin, sound designer Duu-Chih Tu, and editor Ching-Sung Liao). Elsewhere, an introduction/analysis courtesy of critic Tony Rayns highlights in fine detail some of the film’s key scenes and formal gestures, and an archival interview with Hou from a 2015 visit to the Academy of Motion Picture Arts and Sciences features the director giving a relatively rehearsed primer on the making of the film, much of which is illuminated in greater depth in the text-based interview included in the liner notes. Film scholar Jean Ma contributes a wonderful, historically informed essay in the same leaflet, and an original trailer rounds out the package.

This spellbinding masterpiece of historical realism marks the first of Hou Hsiao-Hsien’s films to get the Criterion treatment, and while the beauty of the presentation makes it a must-own, the relatively by-the-numbers extras don’t fully rise to the occasion.