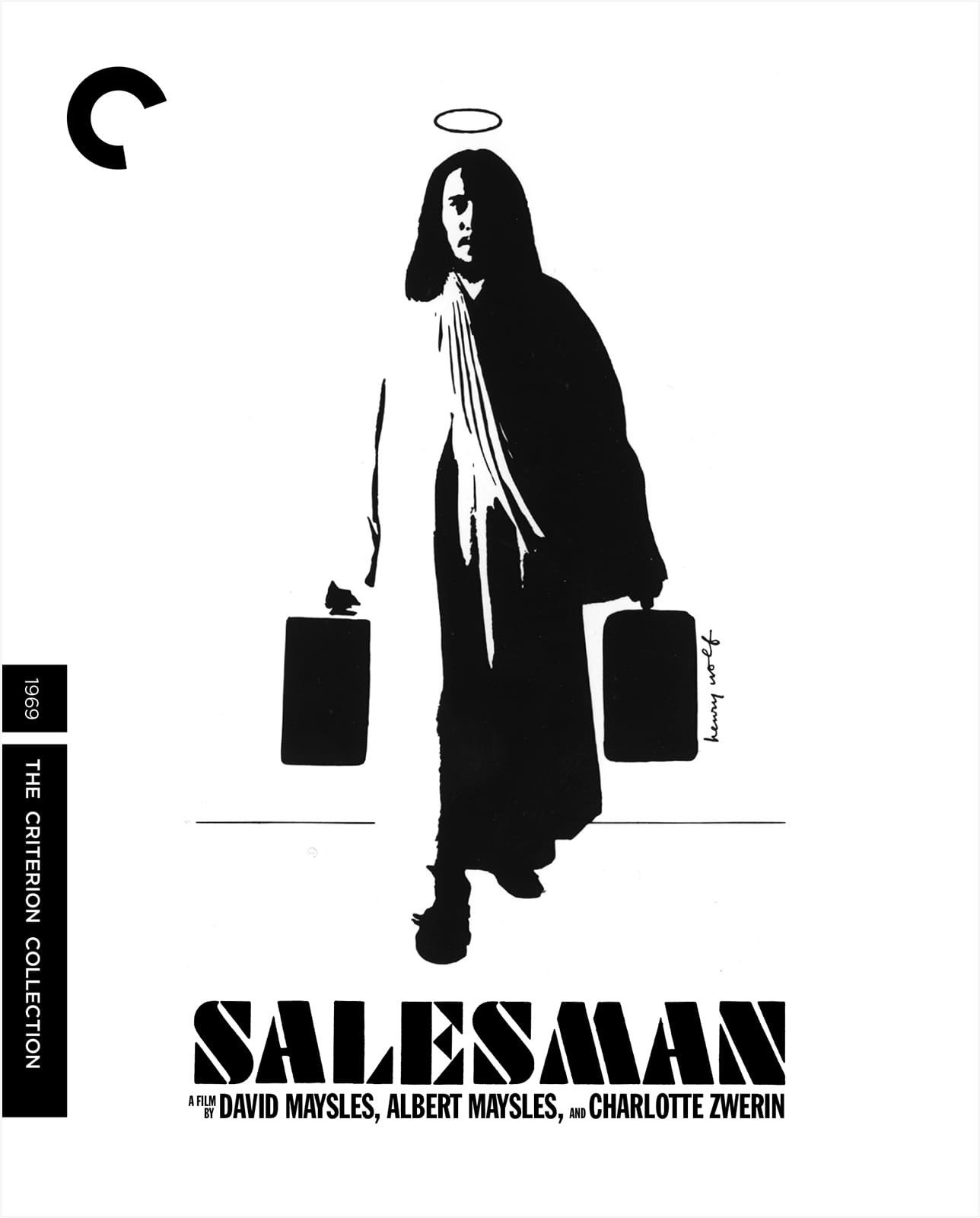 David Maysles, Albert Maysles, and Charlotte Zwerin’s Salesman truly sees its subjects, with none of the distancing formality that’s typical of documentaries or even narrative films. Following four Irish-Catholic salesmen as they work their trade in their selling territories in Boston and Florida, the filmmakers utilize no interviews or narration and make no reference to their own presence, while the salesmen exude a naturalistic ease with the camera that’s virtually unprecedented for non-actors. The result is an immersive drama that bridges real-life details with the catharses of parables with expressionistic on-the-fly camerawork, a blend of the textural and the poetic that’s hallucinatory and profound.

For contemporary audiences, Salesman will appear to be set on an alien planet. Most obviously, there’s the now-anachronistic notion of the salesmen, who appear to live on dollars at a time. The men sell illustrated bibles door to door for 50 bucks a piece, offering a variety of payment plans, which can go as low as a dollar a week. They receive their leads from the Catholic Church, which lends its prestige to the racket. We see many sales pitches in the film, and Zwerin and the Maysles foster a wrenching double-awareness: We’re empathetic to the salesmen, who’re making a precarious living, and to their intended customers, who’re often forced—via prodding, usually through means of religious guilt—to admit that they don’t have the money for an object that will probably be forgotten on a shelf the moment it’s received. When the customers are driven to these confessions, we’re aware of the camera despite its invisibility, as it’s serving to intensify the humiliation suffered by both parties.

Another detail that deepens the film’s despairing view of capitalism is that the salesmen, presumably living hand to mouth, nevertheless drive whip cars. There’s a lingering impression here that these men, as stuck as they are, have some form of security that reflects the long-gone middle-class prosperity of the post-war United States. Related to this security is the film’s proffering of another comfort that’s strange in this bleak context: The door-to-door racket, with the driving and the bullshitting and the conferences, is physically, socially tactile, in stark contrast to our present-day world, which is dominated by online transactions.

Yet these men aren’t to be envied, as they dress in drab suits, chain smoke, and live in anonymous motels and diners. (Notably, none of the salesmen are seen drinking.) The filmmakers carefully omit moments with the men at home, fashioning a slipstream of on-the-road exertions that comes to suggest a kind of purgatory. The closet we get to “home” is a brilliant scene in which the men sit in line on a motel bed, infantilized, waiting to take their turn to call their wives on the phone. Piercingly intimate details continue to surface, as a man’s wife poignantly reminds him to be sure to take care of his tires. Men who might blend into the woodwork of our lives are invested with the stature of tragicomic protagonists, as their individual personalities gradually rise to the film’s forefront.

The men are introduced while in the midst of their respective work, with on-screen text that provides names as well as nicknames. They’re Paul Brennan, “the Badger,” Charles McDevitt, “the Gipper,” James Baker, “the Rabbit,” and Raymond Martos, “the Bull.” The film reveals these monikers to be remarkably apt, especially for the Rabbit, a hyper-enthusiastic young buck, and the Bull, a stout brickhouse of a fellow who expertly wields his hail-fellow-well-met persona. These men give the film a comic pulse, as they thrive on the danger of their profession as well as on the oratorical power of their improvisatory gift for rationalization, which they render into a kind of American folk art. The star, though, is Brennan, an especially artistic and volatile soul who has a habit of perceptively, beautifully summing up his lot in life. He’s the reason that Salesman is compared to Arthur Miller’s Death of a Salesman and Eugene O’Neil’s The Iceman Cometh, and he’s this film’s beating heart.

A successful sale hinges on a salesperson believing their own bullshit. McDevitt, Baker, and Martos seem to recognize that, but Brennan’s understanding of his job as a racket undermines him. Early on, while the men are trading war stories after a day’s work in one of countless motel rooms, Brennan holds a hand to make a “zero” with his fingers, succinctly, theatrically summing up his strike out. And this gesture plants the seed of the film’s arc, as Brennan gets locked in a losing streak that inflames his bitterness and, in turn, his losing streak.

One of the other men memorably tells Brennan that he’s fighting his customers, which they can detect. Brennan sinks into loathing, for himself and his marks, whom he sees as pitilessly wasting his time. (What he might not see is how he sometimes pesters them to the brink of harassment.) In one of Salesman’s many unforgettable scenes, Martos pitches a sale while Brennan observes in an easy chair in the background, seething. For a moment, there’s a reprieve from the fury, as Brennan playfully humors a little boy and his toy car before seething some more. Watching such moments, one is once again made aware of the camera, wondering if this film will get Brennan fired—a constant threat embodied by a supervisor who gives a speech that almost certainly inspired David Mamet’s Glengarry Glen Ross.

As Brennan spirals downward, Salesman offers up other grace notes, in which he connects with customers and we see a gift for flimflam that appears to be rooted in authentic humanity. And as the film progresses, these moments increasingly feel like miracles. Brennan comes to suggest a struggling actor (a rumor carelessly perpetuated by Pauline Kael in her 1970 New Yorker review) who flounders less for his lack of talent than for his sensitivity. He’s in a human prison, which is counterpointed by Albert Maysles’s fluid, gritty black-and-white compositions, many of which include beautiful landscapes seen through windows in backgrounds, mocking the cavernousness of this profession. (Other images, of perspective customers in their homes after salesmen have left, suggest the unknowability of people.)

And the final image is among the most devastating in cinema, one which fully encapsulates Brennan’s predicament: Standing in a doorway, bordered on both sides by the negative space of white walls, he’s a man, a wreck of unarticulated rage, lost in himself as an artist with no audience. He’s all of the nightmares of failure that our society conditions us to nurture.

The new 4K digital transfer of Salesman, undertaken by the Academy Film Archive, offers an image with stunning clarity and depth. This restoration is most notable for its emphasis on the backgrounds of images, which often underscore the worlds that exist outside of the homes where the sales pitches are taking place. Trees, roads, snow, playgrounds, and swimming pools are intensely present, as are the up-close details of the wardrobes and home apparel of the various subjects, which speaks volumes about their lives. The blacks of the cinematography are rich, and the whites are celestially elegant. Nevertheless, a certain grittiness, reflective of the improvisatory nature of the film’s production, remains in tact, preserving Salesman’s evocatively rough and wooly textures. The monaural soundtrack can be fuzzy at times, making speech occasionally difficult to discern, though other sounds—of people’s movement, of the turning of pages and lifting of objects, and so forth—are quite vivid.

Several of these extras have been ported over from Criterion’s prior edition of Salesman, and they’re still relevant and insightful examinations of the film. The 1968 television interview with Albert and David Maysles, conducted by Newsweek critic Jack Kroll, allows the filmmakers to discuss at length the Direct Film movement and its various misconceptions. Most valuably, the Maysles emphasize that their point of view is still ultimately expressed, and that pure objectivity is impossible. (Albert does suggest that the presence of their cameras didn’t materially alter the film’s situations, which I find highly unlikely.) Salesman’s star, Paul Brennan, is also talked about at length, leading to choice observations about artistic objectivity versus moralizing. And notions of subjectivity and empathy are explored in the detailed, personal, and unmissable 2001 audio commentary with Albert Maysles and Charlotte Zwerin. Additional background pertaining to the Direct Film movement and its origins are also offered up by critic Michael Chaiken in the booklet essay included with the disc.

There are a couple of choice new featurettes. Bill Hader, an actor and comedian as well as a cinephile of impeccable taste and observation, who parodied Salesman in the IFC series Documentary Now!, discusses his love for the film, offering one particularly astute note: that the Maysles often shoot the listeners rather than the talkers, emphasizing how speech is processed rather than delivered. Rounding out the package is “Globesman,” an extraordinary episode from the aforementioned Documentary Now!, as well as the film’s trailer.

One of the great and influential American films receives a notable visual upgrade courtesy of Criterion, with a couple of fun new supplements also in the mix.