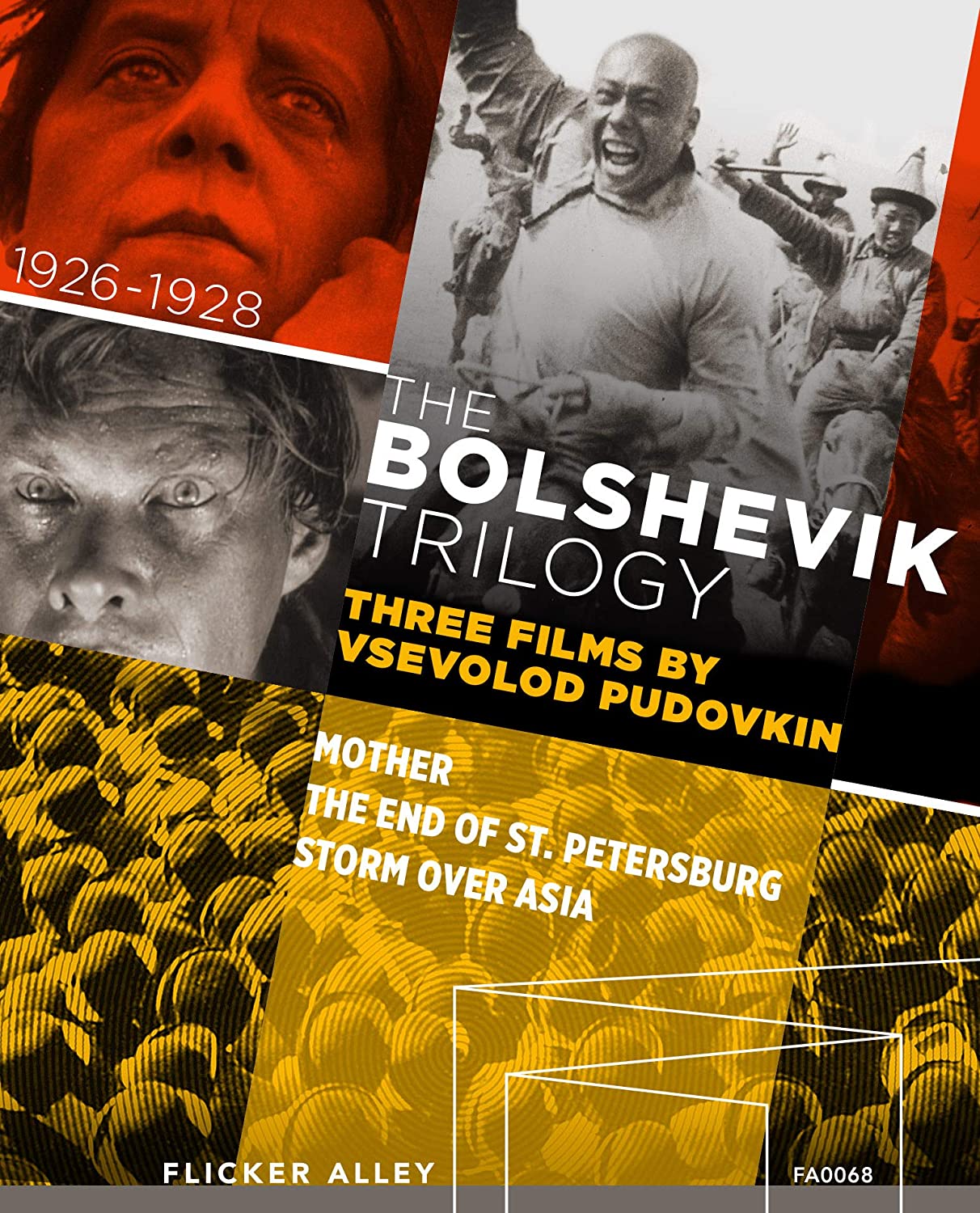 While Sergei Eistenstein’s montage theory shaped Russian cinema in the 1920s, other filmmakers—such as Dziga Vertov, Lev Kuleshov, and Kuleshov’s student, Vsevolod Pudovkin—had their own ideas about how editing could be deployed to maximum effect. Central to Pudovkin’s approach to cinema is his belief that “editing controls the psychological guidance of the spectator”—a quote that gets at the heart of his opposition to Eisenstein’s tendency to focus on the unified masses over individuals and create meaning through a dialectical collision of disparate images.

In Eisenstein’s films, these collectives typically stand in opposition to their capitalist, autocratic oppressors, while individual characters primarily function as emotional signifiers rather than fully fleshed-out human beings. By contrast, Pudovkin’s films focus more on characters’ inner turmoil before spiraling out toward an understanding of collective organization and action. Where Eisenstein’s scene construction is often fragmented, abundant in jarring juxtapositions, Pudovkin’s is more fluid and psychologically motivated, wholly dependent on the specific characters within a given scene.

Pudovkin’s debut film, Mother, is perhaps the greatest illustration of his application of montage. Like Eisenstein’s Strike, released a year before in 1925, Mother tells the story of a factory workers’ strike, but much of the film’s first half plays out through the perspective of a single family: the son (Nikolay Batalov) who’s swept up in the workers’ movement; the father (Aleksandr Chistyakov) who’s recruited by the ultra-nationalist group, the Black Hundreds, to help violently shutdown the factory strike; and the mother (Vera Baranovskaya) whose initial worries about her son’s revolutionary acts eventually turn to sympathy for the cause.

Through this family drama, we’re given a sense of the divide between the classes and the struggles of everyday working-class people, with the son first standing up to his drunken father for beating his mother and later being blamed for his father’s death following a fight between strikers and members of the Black Hundreds. Because Pudovkin filters much of the proceedings through the eyes of the son, this death and the fallout it causes with his mother carries strong emotional resonance. Yet, Pudovkin still effectively weaves this experience into the larger fabric of these revolutionary times, using this event as a symbolic fracturing of the family dynamic—a form of collateral damage on the path to building a new communist society.

Following the father’s death, Mother opens up to the larger sense of sociopolitical upheaval, presenting a sweeping condemnation of Tsarist Russia, from the callous capitalist businessman to corrupt policemen and cruel, indifferent judges who condemn the son with little to no evidence against him. These men only make brief appearances in the film, but they’re granted a striking psychological realism through an array of close-ups of expressive gestures—a policeman stroking his hand, a factory owner tapping a cigarette on a fancy case, a disinterested judge sketching a horse while the son’s case plays out.

These miniature portraits are starkly contrasted with Pudovkin’s more blatantly symbolic use of nature, which always stands in direct opposition to tyrannical power. Pastoral fields (the domain of the workers) are presented in all their idyllic glory, and in a stunning sequence late in the film, melting sheets of ice flow downstream, paralleling the movement of now-empowered workers as they furiously march in protest to free their unjustly jailed comrades.

Pudovkin’s use of nature is used even more explicitly in 1927’s The End of St. Petersburg, with the beauty of the Russian countryside pitted against the harsh architecture and polluting factories of St. Petersburg. Through parallel editing, Pudovkin lays bare a nation’s class inequities, with rural areas rife with starvation and poverty while the city is controlled by an affluent upper class that’s indifferent to this suffering. The clash of ideologies is made even more glaringly apparent here than in Mother, as images of chaos at the stock market and of greedy traders and businessmen are repeatedly juxtaposed with shots of people struggling to survive in the countryside and workers suffering through long work days and the senseless violence of war, which is shown to benefit only the war profiteers.

Like Mother, The End of St. Petersburg filters the historical and the political through the hardships of an unnamed peasant (Aleksandr Chistyakov). And the man’s journey from the countryside to a factory in the titular city and then to the battlefield anchors the sweeping revolutionary history of 1917 Russia through a single perspective, at once unique and representative of the experiences of many thousands of others at the time.

Pudovkin’s final entry in his “Bolshevik Trilogy,” 1928’s Storm Over Asia, is a bit of an outlier, not only in its injection of historical fiction, with imperialist British rulers in power in Russia, but also in its ethnographic study of the daily lives of ordinary Mongolian herders. The film is stylistically and narratively the most straightforward of the three, relying on rapid montage only a handful of times throughout. Pudovkin’s focus instead lies in exploring the bonds between poor Mongolians and Russians, and conveying the value of their cooperation in helping to overthrow their domineering foreign rulers.

Pudovkin again works from the minute to the epic, first plunging the viewer into the world of a poor Mongolian herder, Bair (Valéry Inkijinoff), before contrasting the gorgeous, bucolic landscape in which the man lives and the cooperative nature of his people with the racist, materialist, and exploitive actions of the British. In a way, Storm of Asia is less pro-Bolshevik than anti-imperialist, but its more global perspective offers insight into how the Bolsheviks saw Russia in relation to the rest of the international community at the time. It’s a fitting finale to a trilogy that sets out to illustrate the various reasons for embracing a particular ideology as well as a potent display of Pudovkin’s ability to merge his examinations of individual turmoil with pointed social and political commentary.

Neither Mother nor The End of St. Petersburg were transferred from restored sources, and the flawed presentation of both films highlights the myriad challenges that need to be overcome in order to restore any but the most well-preserved silent films. Both films here are obviously presented in HD and the sharpness and detail of the image is far superior to prior transfers. But quite a bit of damage and debris is on consistent display throughout both films; there’s also a recurring flickering that begins to wear on the eyes after a while. Blacks very frequently appear closer to milky grays, and although both films are still very much watchable in this state, it’s clear that they could use a hefty polishing to return them to their former state of glory. Fortunately, the transfer of Storm of Asia is sourced from a brand new 2K remaster, scanned from a 35mm print, and the difference is night and day. Blacks are considerably inkier, finer details are visible throughout the frame, and while signs of dirt and debris remain visible, it’s negligible compared to the other two films included in the set.

Flicker Alley’s two-disc Blu-ray set is brimming with informative and engaging extras that help to contextualize all three films within the period of Russian history and cinema in which they were made. The two beefiest features are the audio commentaries on Mother and Storm Over Asia. The first, by Russian film historian and curator Peter Bagrov, touches on Pudovkin’s approach to articulating the empathy and humanism of Maxim Gorky’s novel. Bagrov’s discussion of Pudovkin’s aesthetic, and the ways he uses distance, camera angles, and lighting to convey his characters’ psychological complexity, is particularly effective. Most surprising is Bagrov’s argument that American continuity editing, especially that of D.W. Griffith, helped to shape Pudovkin’s aesthetic. Film historian Jan-Christopher Horak’s commentary for Storm Over Asia is noticeably drier, as it sounds as if he’s reading from a script verbatim, but he nonetheless offers some intriguing observations, namely on the effects that Stalin’s rule had on Russian experimental cinema of the 1920s, along with a plethora of information about Mongolian and Russia history that sheds light on certain aspects of the film.

Most enlightening of the remaining extras is the 10-minute “A Revolution in Five Moves,” which uses specific shots and scenes from the “Bolshevik Trilogy” to illustrate Pudovkin’s use of motifs, symbolism, contrast, parallelism, and simultaneity. The slightly shorter “Five Principles of Editing” is a nice companion piece, giving more precise definitions of these concepts and additional examples from within the three films. Clocking it at under two minutes a piece, both “Amateur Images of St. Petersburg” and “Notebooks of a Tourist” provide a layman’s perspective of life in 1920s Russia. Pudovkin’s slight but amusing 1925 short film Chess Fever is also included as is a booklet with an essay by film historian Amy Sargeant.