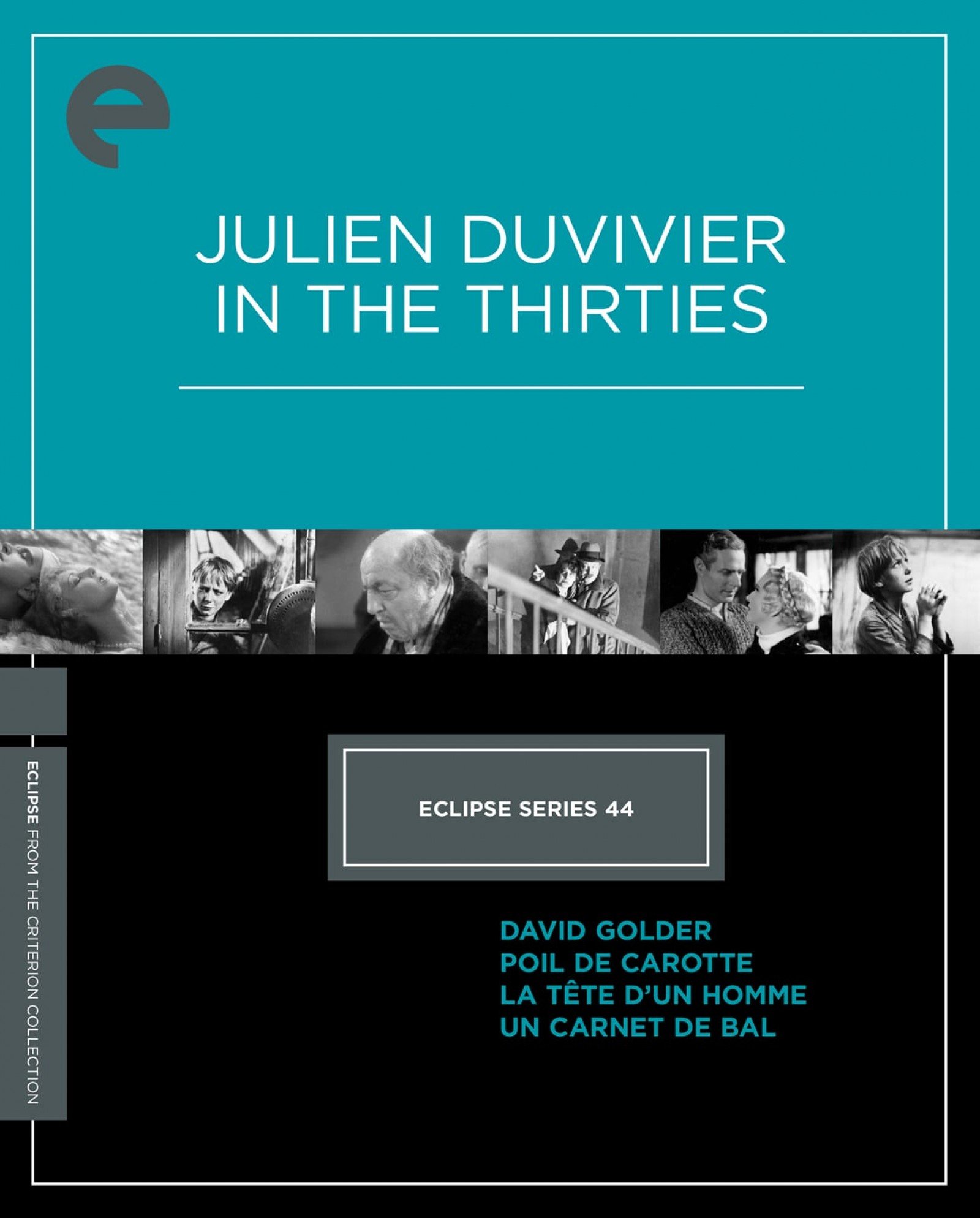 The first thing one notices upon encountering the world of Julien Duvivier is the mobility of his camera. Graceful and inquisitive, the French filmmaker’s lens proved an instrumental tool not only in the formal conception of his films, but even more so in their narrative construction. Like many directors tasked with transitioning between the silent and sound eras of cinema, Duvivier was first and foremost a visual storyteller, a trait he didn’t forfeit as he embarked on a fruitful career which stretched from the late-1910s well into the ‘60s. Though he was reluctant to capitulate to the mandates of sound, having made dozens of films over the decade prior, one rarely senses in his films from the 1930s an unsure hand, or detects a stubborn vision of cinema’s evolving identity. In fact, his best work from the period so wholly integrates the converging capacities of the medium that it can be tempting to retroactively classify him as one of the progenitors of modern cinema itself.

Duvivier’s penchant for cynical, even comically mordant subject matter likewise speaks to his prescient perspective. His first film of the sound era, 1930’s David Golder, is indicative of this sardonic worldview. Starring the imposing stage actor Harry Baur, in his first of seven roles for the director, the film tells a tale of patriarchal strife in which a callous Jewish banker (Bauer) is emotionally and fiscally victimized by his hostile ex-wife (Paule Andral) and uncaring daughter (Jackie Monnier). Duvivier, working from his own adaption of a 1929 novel of the same name by Irène Némirovsky, handles such potentially melodramatic material with a careful balance of sympathy and scrutiny, never allowing his characters’ malicious actions to completely overshadow their sense of shared humanity. This simultaneously objective and empathetic eye is reflected in the delicate demeanor of Duvivier’s compositions, which shift, often in a single camera move, from long shots of characters casually conversing in richly ornamented interiors to close-ups mapping the psychological dimensions of their frayed relationships. If, in the end, Baur’s title character must meet an inevitable fate, it’s not without a redemptive plea, rendering Golder less a monster than a martyr for a family he never truly knew.

Baur assumes another parental role in 1932’s Poil de Carotte, as the neglectful father of a young boy name François (Robert Lynen), otherwise known not-so-affectionately as Carrottop—in reference to his head of unkempt red hair. But if Francois’s father is simply inattentive, preoccupied with his own business endeavors, then his mother (Catherine Fonteney) is downright tyrannical, verbally and physically abusive and of little remorse. Carrottop therefore steers clear of his countryside home, opting to rabble-rouse and innocently arouse mischief with the town locals. His mind is understandably prone to bouts of reverie, waking fantasies which Duvivier visualizes with an intrepid imagination all his own, utilizing superimpositions and primitive printing effects to stage elaborate approximations of Carrottop’s internal struggle.

As he did with the opulent manors of David Golder, Duvivier keenly captures the exact opposite in Poil de Carotte, his penchant for long establishing shots and serenely roaming camera movements a perfect complement to the expansive countryside locales and antiquated farmhouses perched across the landscape. Despite the sun-dappled settings and generally carefree tone, the film builds to an unforgettably harrowing climax, with Carrottop’s crippling disenchantment forcing an intervention of unexpectedly tender proportions.

No such comfort is offered in 1933’s La Tête d’un Home, a dark and morally complex crime procedural which found Duvivier’s stylistic acumen reaching new heights of expressive brilliance. Based on the Georges Simenon novel A Man’s Head, the film stars Baur as the Belgian author’s most indelible creation, Inspector Maigret, here on the trail of a Czech immigrant presumed responsible for the murder of an American aristocrat living in Paris. Maigret is cool and collected in the face of potentially dangerous discoveries, leaving Radek (Valéry Inkijinoff), the prime suspect of the killing, to stew in his accumulating guilt, two contrasting psychologies which Duvivier pits against one another with methodically intensifying precision.

The urban backdrop and macabre subject matter allow for a noirish atmosphere to take hold early, which Duvivier accentuates with an omniscient camera, exaggerated angles, and confined, vaguely gothic spatial settings. In a fashion familiar to many of Duvivier’s less desirable characters, Radek is granted something of a tragic arc, devolving from a potentially misunderstood foreigner to an exasperated sociopath trapped in the prison of his own mind. Duvivier’s visual articulation of this fall from grace is the film’s most impressive trait, lending a discomfiting sense of empathy to a man whose fate is ultimately out of his own hands.

By 1937, Duvivier had risen to the front ranks of French filmmaking as one of its most tireless workhorses and most bankable assets. That very same year would bring two even greater successes, Pépé le Moko and Un Carnet de Bal, very different films that nonetheless exemplify the range of Duvivier’s talents. The latter, though significantly less known, is perhaps his most painfully romantic and deceptively ambitious work. Adapted from Jean Giraudoux’s 1924 novel Juliette au Pays des Hommes and starring Marie Bell as Christine, a lonely rich widow attempting to reconcile the joie de vivre of her youth with the encroaching sorrow of middle age, the film mounts an elaborately episodic narrative which attempts to encapsulate nothing less than an entire lifetime’s worth of regret and unrequited passion. The film’s title translates as “Dance Card,” in reference to a handwritten list of young men a teenaged Christine entertained at her first ball, and that which she consults while traveling across France in search of these long lost suitors.

As one might expect, these men—which include a doctor, a mountain guide, a town mayor, and, most memorably, a melancholy priest played by Baur—are now of various vocational and romantic standing, and each encounter is attentively depicted by Duvivier with a delicate sense of remorse and nostalgia. Here his tracking shots seem to replicate a kind of slow waltz, surveying the characters as they reminisce of times since forgotten. But as Christine proceeds to make peace with her past, an uncommon sense of hope prevails, one unique to the director’s films from this period. In fact, the refinement and poetic grandeur of the film feels emblematic of the strides French filmmaking on the whole took over this period, and though he would soon move on to a brief stint in Hollywood, Un Carnet de Bal shines like a light at the end of a tunnel not only for Duvivier, but for an industry on the precipice of gaining a stronghold on world cinema.

Unsurprisingly for films now over 80 years old, the transfers of the four Julian Duvivier films comprising Criterion’s latest Eclipse set are at the mercy of the available materials. These are unrestored transfers, and thus show inevitable signs of wear, with scratches and artifacts and unstable frame rates all in evidence. Nevertheless, the natural film grain remains pleasing to the eye, as does the solidly delineated contrast, lending a tactility to the images that could otherwise be lost to digitization. Sound, meanwhile, presents similar obstructions, with hints of background noise and the odd audible pop emerging on the soundtrack, occasionally interfering with the various scores. Voices remain relatively clear, however, upfront and discernible in their single channel mono mixes. All in all, these are perfectly watchable—perhaps even better than they should be, considering the age of the films—with no egregious audio/visual deficiencies.

Like all Eclipse sets, no digital supplements are offered. There are, however, excellent liner notes included for each film, written by Michael Koresky.