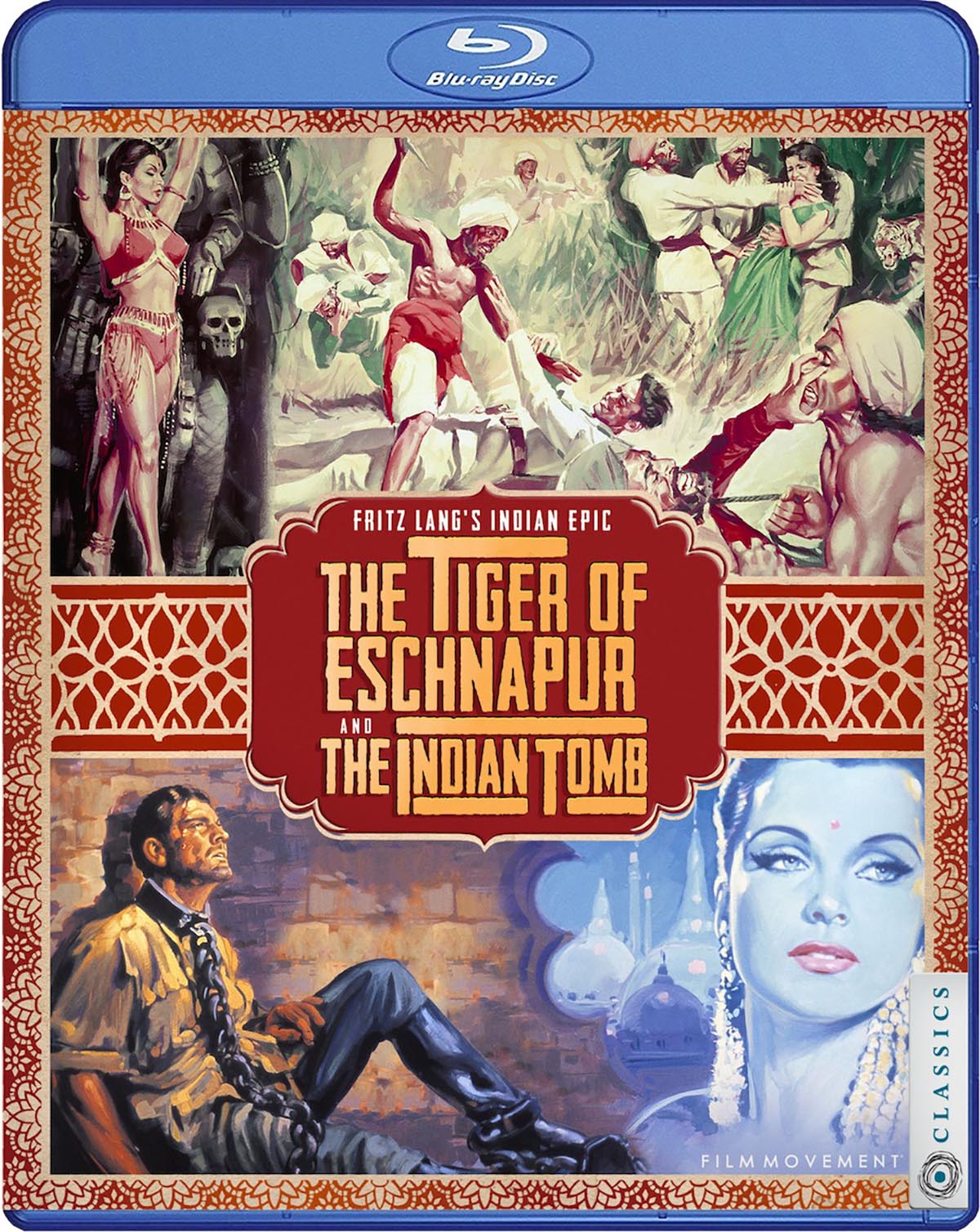 “Always finish what you start,” says Fritz Lang, appearing more or less as himself, at one point in Jean-Luc Godard’s Contempt. That advice aptly summarizes Lang’s feelings toward his Indian Epic, the two-part remake of a 1921 film he co-scripted with then-wife Thea von Harbou but had been denied the opportunity to direct when its producer took over the reins. In many ways, these films constitute the closing of a circle, marking Lang’s return to the German film industry after nearly 30 years in exile, as well as his revival of a sprawling, multi-part style of fantasy-adventure storytelling akin to that of The Spiders and Die Nibelungen.

Superficially, at least, the Indian Epic may seem like an ill-conceived throwback to the outdated narrative devices—not to mention occasionally slapdash special effects—found in those silent-era films. The films, The Tiger of Eschnapur and The Indian Tomb, are inarguably best appreciated for their surface pleasures, foremost among them Richard Angst’s gorgeous color cinematography, lavished alike on the stunning and heretofore forbidden locations in Udaipur, India, and the massive, intricately detailed sets designed by Helmut Nentwig and Willy Schatz. But Lang still manages to imbue the films with his own longstanding stylistic and thematic preoccupations. If ever there were an ideal test case for the auteur theory, it would have to be these two works.

Lang, the onetime student of architecture, makes his hero, Harald Berger (Paul Hubschmid), an architect who has come to the kingdom of Eschnapur to design schools and hospitals for Maharaja Chandra (Walter Reyer). The films often make reference to Berger’s scale models and detailed plans of the Maharaja’s palace. Indeed, this floating fortress practically becomes a character in its own right. As in Moonfleet, there’s a striking contrast between luxurious aboveground spaces and the dank vaults and crypts of the subterranean realm. Water plays a key role here, as it does in many Lang films. Both the Indian Epic and Metropolis, for instance, end with climactic floods that serve to quell a rebellion.

Lang’s films often explore destiny in its manifold manifestations. (Even one of his earliest efforts is titled Destiny.) The Tiger of Eschnapur and The Indian Tomb work out this theme by frequently utilizing high-angle shots to indicate a sense of mastery, that characters feel themselves in command (rightly or wrongly) of all they survey. This exercise of power ties into the films’ invocation of divine authority. Not exactly dismissive of Eastern (read: non-Christian) deities, the Indian Epic unambiguously demonstrates their intervention in human affairs, albeit in ways that seem dispassionately tied to ritual practices. Thus, when temple dancer Seetha (Debra Paget) supplicates Shiva to aid her and Berger, the god shields their hiding place with a miraculously spun spiderweb. Just as surely, when Berger selfishly takes some of the offering to satisfy his own hunger, the god immediately rescinds his assistance.

The Indian Epic at times works to undermine the very Orientalist fantasies it seems to traffic in. For one thing, the Eastern ruler comes across as more cool-headed and deliberative than the rather impulsive Westerner, who rashly intrudes upon a proscribed temple ritual, breaking a hallowed taboo and transgressing the rules of hospitality into the bargain. When it comes to the final conflict between the two viewpoints, Berger proves himself prone to brutal outbursts of violence, yet ironically ends the second film, The Indian Tomb, prostrate on a litter, attended by the obliging Seetha. The Maharaja, for his part, is the one who decides to forego the dubious pleasures of retribution, opting instead for the decidedly Buddhistic path of renunciation. As Lang himself puts it in Contempt: “Death is no resolution.”

The 4K restorations of the films, each housed on its own Blu-ray disc, look spectacular. Colors are slightly paler, compared to the 2003 Fantoma DVD set, but the overall image is brighter, and there’s more information visible on the sides of the frame. Clarity of details and image depth are increased. Where the Fantoma discs featured both German and English options, Film Movement offers only the German track in a two-channel LPCM mono mix that nicely brings out some of the ambient sound effects (rifle discharges, clanging swords, tiger roars), as well as a pair of rousing scores by Michel Michelet and Gerhard Becker, respectively.

Film historian David Kalat provides commentary tracks for both films. Given the considerable combined run time, Kalat has plenty of opportunity to display his encyclopedic knowledge of Fritz Lang’s life and films. He meticulously traces Lang’s obsession with the Indian Epic from its origins as a novel written by Lang’s one-time wife and screenwriting partner, Thea von Harbou, the rancor Lang felt when the subsequent silent film adaptation he was supposed to helm was taken away from him by producer Joe May, and his desire to “close the circle” by finally filming his own version when offered the opportunity by producer Artur Brauner. Kalat also does an excellent job of pointing out formal and thematic connections between the Indian Epic and Lang’s earlier films, from Metropolis to Moonfleet. (One of Kalat’s more intriguing digressions concerns Lang’s indirect yet significant debt to the writings of Karl May.)

From 2005, the making-of documentary “The Indian Epic” has talking-head commentary from producer Brauner, assistant director Eva Ebner, and co-star Sabine Bethmann, along with some delightful behind-the-scenes footage the actress shot on 8mm while on-location in India. Mark Rappaport’s visual essay “Debra Paget, For Example” explores the actress’s career from her first role in Robert Siodmak’s Cry of the City to her involvement in the Indian Epic, with a fascinating excursus about her marriage to a wealthy and reclusive Texas oilman, who just so happened to be a direct descendent of the Chinese philosopher Confucius. Rappaport emphasizes Hollywood’s oddly contradictory typecasting of Paget as either the wholesome girl next door type or else the exotic beauty with a penchant for performing seductive dance numbers. There’s also an illustrated booklet with an essay from film historian Tom Gunning that explores Lang’s investment in the themes of destiny and fatalism.