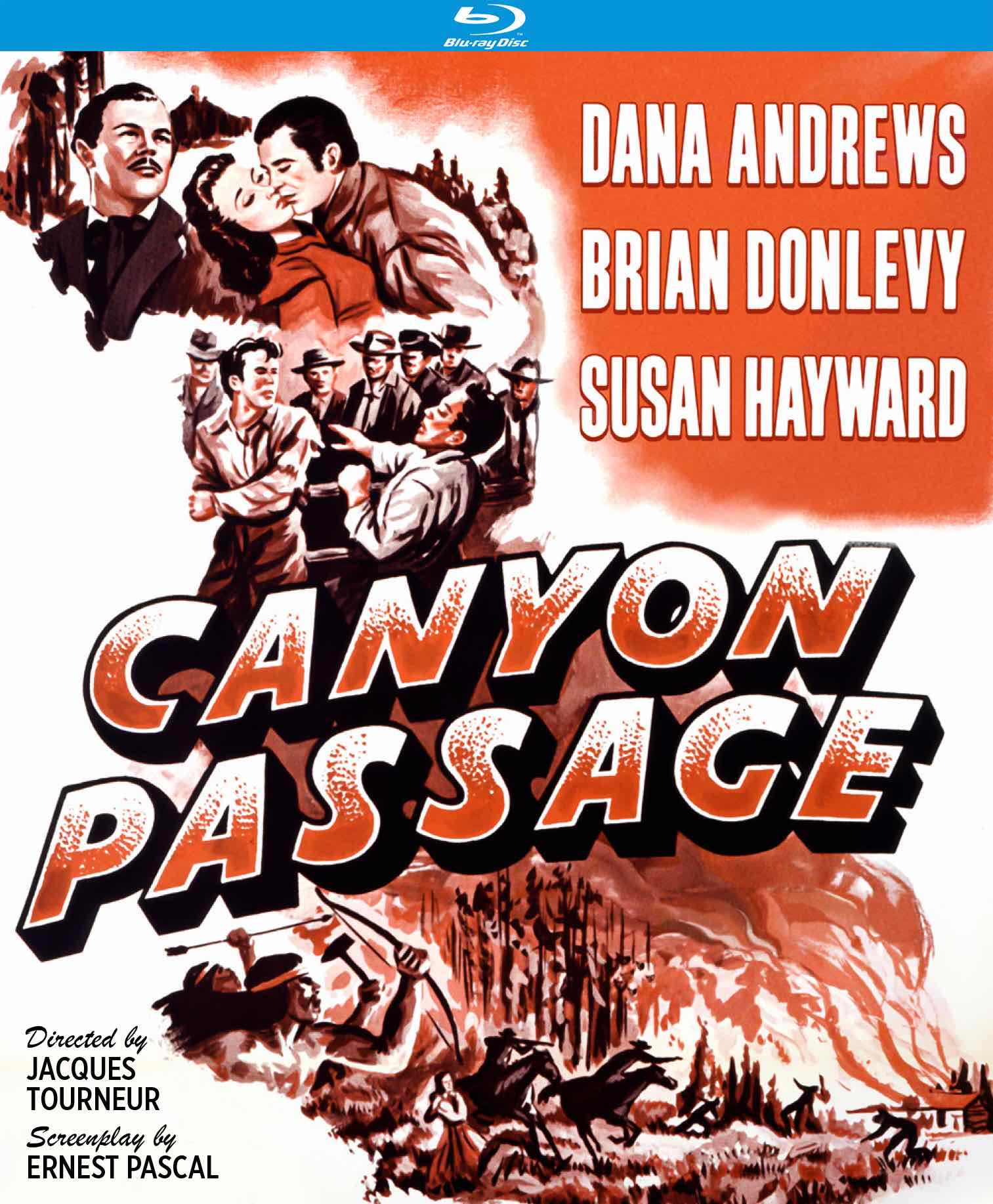 Jacques Tourneur’s first color feature, 1946’s Canyon Passage, at first seems relatively straightforward compared to the borderline experimental black-and-white films that made him one of the classic studio era’s boldest filmmakers. Also his first western, the film tracks roughneck Logan Stuart (Dana Andrews) as he deals with local thug Honey Bragg (Ward Bond) and weighs his relationship to the virginal Caroline Marsh (Patricia Roc) against his budding attraction to Lucy Overmire (Susan Hayward), the girlfriend of his best friend, George Camrose (Brian Donlevy). This plot, a mixture of romantic melodrama and suspenseful action, is a far cry from the supernatural horror and existential noir on which Tourneur’s reputation stands, and the naturalistic hues of the Technicolor cinematography lack the almost avant-garde textural contrasts of his monochrome films.

Canyon Passage, however, gradually reveals strange undercurrents that complicate its seeming normalcy. Andrews plays Logan, who longs to roam the frontiers of Oregon rather than settle down, in the key of one of his existentially restless noir heroes. And the man’s romantic entanglements take on a psychosexual dimension when he inadvertently enters into a loose competition for Lucy with George, whose own proclivities add lascivious undertones to the film. At one point, Logan teases George for the chaste kisses he gives Lucy, to which his friend keeps asking, “Could you do better?,” before Logan finally walks over without a word and gives the woman a tender, passionate kiss to fulfill George’s cuckolding dares.

George, an inveterate gambler who exploits his position as a banker to embezzle gold dust savings from the miners of Jacksonville, Oregon, shows far more attention to money than he ever does to Lucy; in one early shot, the film’s drab colors and soft lighting brighten in a medium close-up of George weighing gold dust, reflecting his momentary euphoria at being in possession of such riches. And such subjective, hyper-stylistic flourishes recur in Canyon Passage whenever George attempts to flirt with Marta Lestrade (Rose Hobart), who presides over Jacksonville’s gambling scene, and who, given her black attire and severe visage, suggests death itself as she looms over George. Every shot that features the woman is marked by extremes in contrast, heavy shadows and stark diegetic lighting that accentuate cinematographer Edward Cronjager’s color palette. Ever so subtly, the film begins to shift from an objective, straightforward use of color and light to an increasingly expressionistic one.

That aesthetic shakeup increases dramatically when Logan and local townsfolk have to deal with raiding parties from a nearby Native American tribe. Though not as focused on the impact of white expansionism as I Walked with a Zombie, nor even as race-focused as Tourneur’s later western Stars in My Crown, Canyon Passage nonetheless acknowledges that frontier tensions owe much to Americans’ callous territorial annexations. Early in the film, Logan and Lucy visit Logan’s homesteader friend, Ben (Andy Devine), who freely admits, “It’s their land and we’re on it, and they don’t forget it,” when the topic of potential tribal aggression arises, though in the same breath he vows to defend his property with violence if necessary.

Later, when raiders approach a party celebrating a newly built cabin, they stand near a bonfire that bathes them in a reddish glow, the cinematography exaggerating their skin color and further casting them as ominous others. Even though that confrontation is dispelled peacefully, the film pointedly shows how the settlers’ mistrust of natives never fades; a raiding party plays a key role in dealing with Logan’s nemesis, local brute Honey Bragg (Ward Bond), but despite townsfolk allowing the tribe to deal with the thief and murderer, they wait to open fire on the indigenous people the second that the Bragg problem is settled.

Made under the aegis of Universal Pictures and on a large budget, Canyon Passage was Tourneur’s first major studio project, and as such it’s something of a transitional work in his oeuvre. At every turn, though, Tourneur’s mastery of visual storytelling and termitic social commentary is evident. The film’s increasingly feverish sexual energy and its handling of racial tensions form a clear link from his work for RKO to his later studio films, proving how well he could smuggle his strange, caustic vision onto a larger canvas.

Kino Lorber’s disc is sourced from an unrestored transfer, as evidenced by the minor scratches and other decay throughout. There’s also some visible separation between color strips, resulting in an occasional haze around objects and especially faces. Nonetheless, the colors are richly presented, from the naturalistic oak-browns and forest greens to the later suffusion of glowing red. Black levels are also strong, with no obvious crushing and the only occasional softness looking like a result of the transfer source. The mono soundtrack is clear, with even distribution of music, dialogue, and sound effects.

Film historian Toby Roan provides a commentary track that’s informative, if at times too objectively minded, as his detailing of the actors’ biographies comes at the expense of critical analysis. Nonetheless, Roan provides a number of interesting details about the production that give insight into Jacques Tourneur’s working process.

An unfairly overlooked film gets a solid high-def release, though it’s hard not to wish for a full restoration of this subtly gorgeous Technicolor opus.