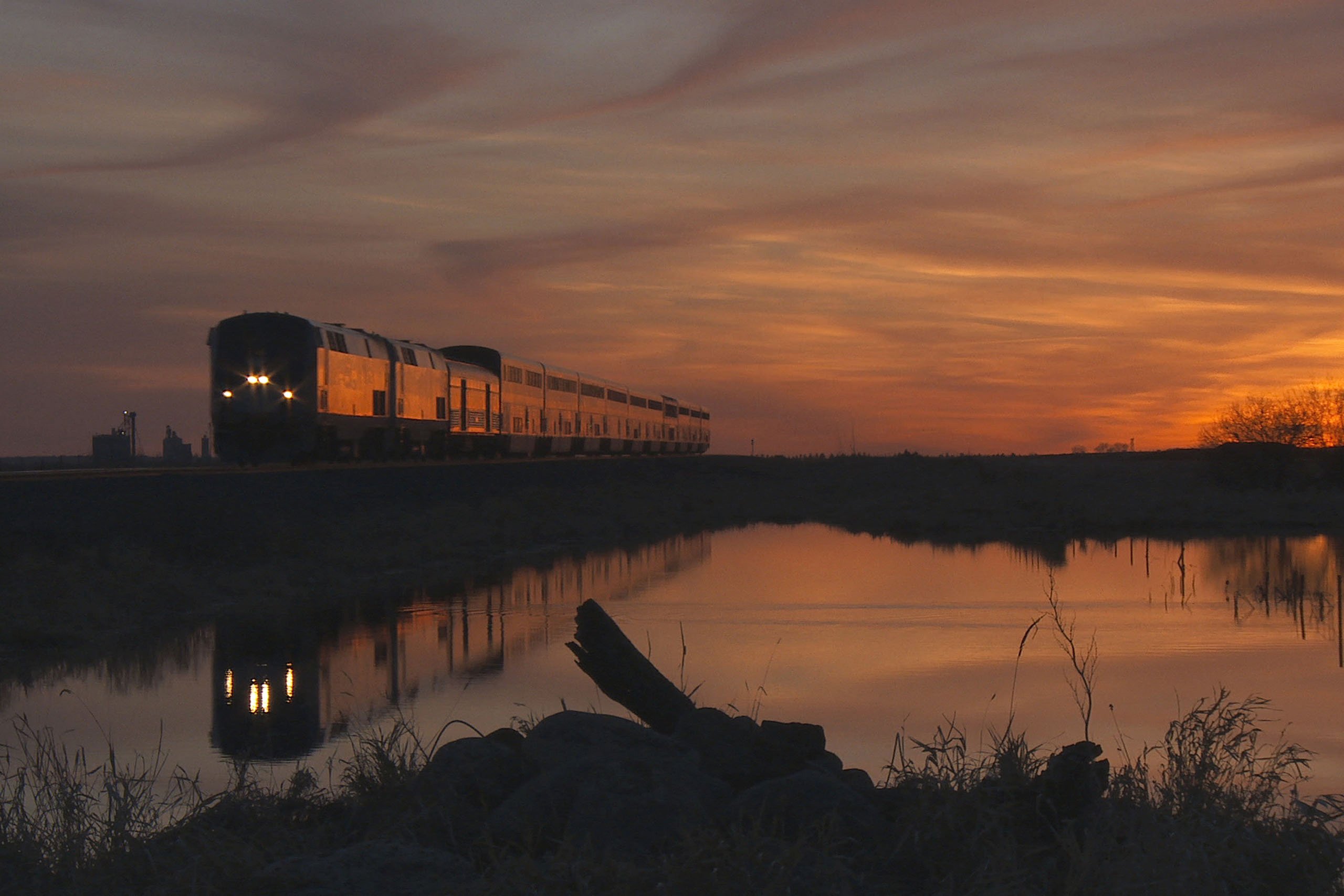 “At any given time, multiple Empire Builders are crossing the country, carrying hundreds of passengers east and west simultaneously.” This text appears on screen in Albert Maysles’s In Transit, and resounds with a comforting, nearly incantatory ring of stability in our over-mediated age of perpetual rage and chaos. We may be at each other’s throats, fighting with increasing vehemence over this country’s economic, ecological, racial, and classical identity, but the trains keep running, offering a glimpse of a fleetingly empowering realm. Maysles’s final documentary isn’t overtly political, but the film’s soothing and tranquil biorhythms scan as a form of critique via omission. Cynicism rules the United States presently, but the passengers glimpsed here belong to various races, nationalities, creeds, and generations, and intermingle with striking and surprising empathetic civility. The bitterness of racial and political divisions are rarely seen in this film.

Amtrak’s Empire Builder is, per the film’s text, America’s busiest long-distance train route, running between Chicago in the east and Portland and Seattle in the west. Maysles and his co-directors and cinematographers, including Lynn True, David Usui, Nelson Walker III, and Benjamin Wu, film passengers on the train, allowing their subjects to tell the audience why they’re traveling. Common themes emerge, as most of the passengers are pursuing a transcendence of reinvention, that most seductive of American dreams, which is symbolized by the train’s suggestion of stasis via mobility. On a train or even a plane, one can feel cocooned, cordoned off from the pressures of society in a specially privileged bubble, while moving toward a new destiny.

The film’s opening image beautifully evokes all these sensations at once, as a young man and woman talk of traveling while separated by the barrier of a seat. These strangers are connected via their common restlessness, then, yet are also reassuringly distanced by the conventions of public travel. The man is moving from Mississippi to Seattle on a whim, feeling stuck in exploitive work. We eventually learn this man’s name, Chris, and he surfaces periodically throughout In Transit, embodying travel’s healthy connotations of adventure. Many of the passengers are lost souls, however, attempting to attain closure or release from their demons and regrets. Maysles and his collaborators film these people raptly and patiently, honoring their internal deliberations.

Maysles’s mightiest strength as a documentarian, evident throughout his 60-year career, is his curiosity—a quality that’s not as easy to exhibit as it sounds, either as an artist or a human being. We’re so desperate to be heard and so certain that we’re unheard that we never hear, forging a social chain of self-fulfilling prophecy. The exhilaration of Maysles’s work springs from how confidently and quietly he breaks that chain, as he’s equally at ease when speaking to struggling Bible salesmen in 1969’s iconic Salesman, or Paul McCartney in 2011’s made-for-television The Love We Make, or the various passengers and railway employees of In Transit.

This film is occupied by men who work in North Dakota’s oil fields, inviting the potential for conjecture over oil’s troubling place in society or the state’s political redness. But Maysles shoots these men with a plainspoken sense of acceptance that refutes liberal piety as well as conservative bloviating. A worker in the oilfields plays cards with a teenager who’s presumably his son, who asks about the conditions of the forbiddingly cold weather. The man asserts that you just “get it done,” exhibiting understandable and poignant pride in his own will and endurance, while gently encouraging the boy. This man has what most of us want: a defined purpose.

Maysles rhymes this scene with another moment featuring a younger oil field worker, who has visible dirt under his fingernails and tells the camera of his plan to toil in the fields for seven years and invest his considerable earnings into a house and other ventures. These scenes also rhyme, less literally, with those featuring an elderly African-American man, who met Martin Luther King Jr. and who exhibits an air of someone who’s lived through shit and come out on the other side elegantly wizened and peaceful. He counsels a troubled father and later insists that the cruelty committed by exploiters has been at the service of denying humankind purpose, an assertion that’s reaffirmed by a middle-aged woman who’s afraid to get off the train because she might find herself re-clinging to the labels that she’s worn throughout her life.

In Transit’s thematic organization suggests the cinematic equivalent of a short-story collection, with haunting tangents and stray notes of poetry. Maysles and his collaborators contrast gorgeous compositions of the stark yet beautiful Midwest with the sleek contours of the train’s interior, along with the plaintive vulnerability of the Empire Builder’s passengers, while uncovering grace notes such as the rustling of an overnight chamber’s curtains from the movement of the train. When an elderly woman tells a heartbreaking story of the dissolution of her family decades ago, Maysles lingers on her newly dyed red hair and on her eyes, which are magnified by large glasses, revealing the dignity of her strength and sadness. Such textures paint a cumulative portrait of the human vulnerability that’s often hidden out in the social open.

It’s consistently startling what Maysles’s interviewees are willing to share about their lives, which is indirectly explained by a spunky little boy who insists that making friends is as simple as approaching people and asking them for their friendship. Unsullied by the crises of self-definition, disappointment, and ego that define adulthood, this boy possesses the gift of straightforwardness, which Maysles rapturously imparts to all of his subjects. There’s a desire, easily defined yet nearly impossible to quell, that explains why these people are so open with these filmmakers: They have been waiting to tell their stories so as to be truly seen and heard. It’s this yearning that got them on the train—in transit and in transition—in the first place.