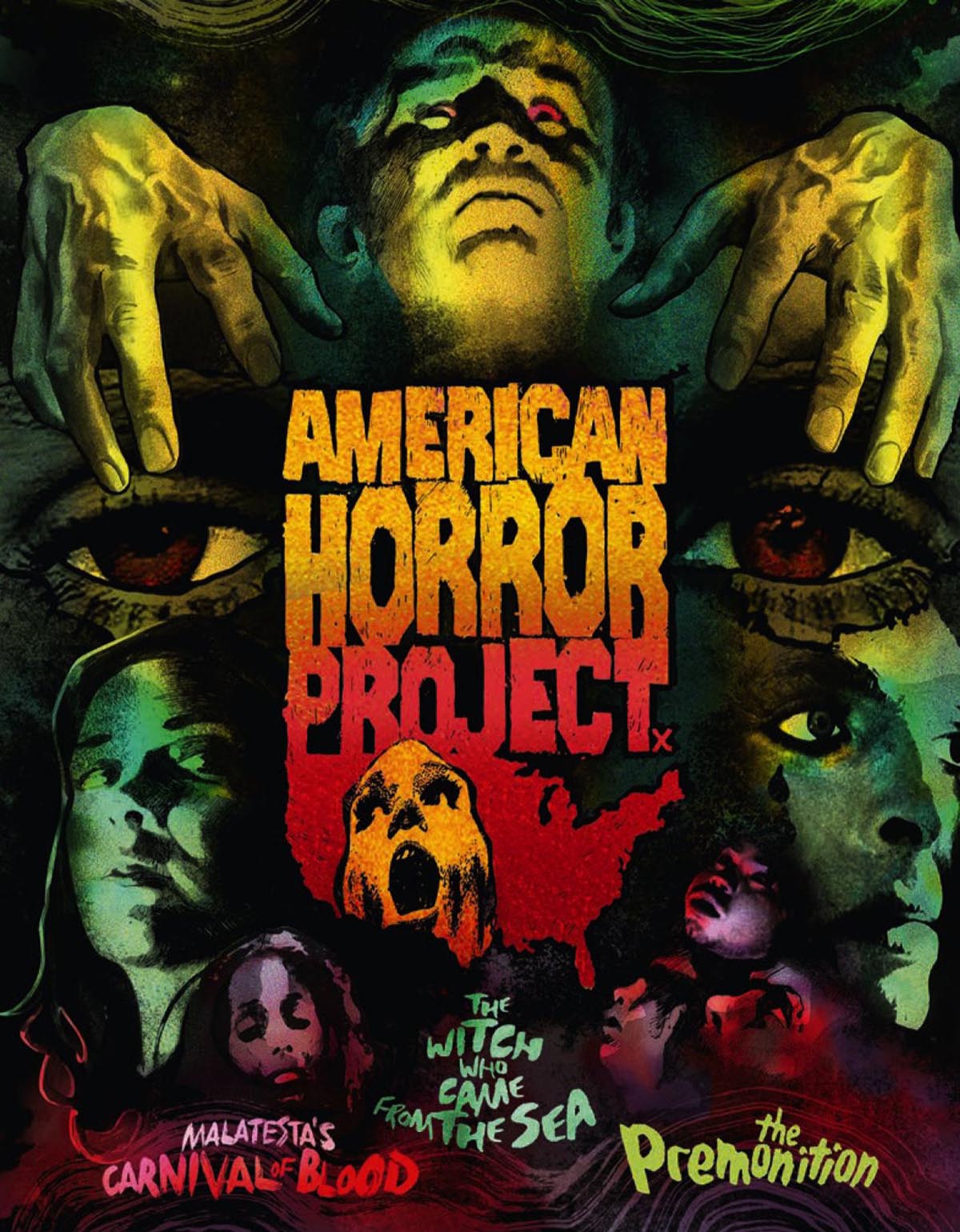 Few periods of American cinema are as neglected by critics and historians as independently produced, 1970s horror, and conventional wisdom might point to the lack of available titles on home video, aside from a handful of the usual suspects like The Texas Chainsaw Massacre and Halloween, for this dearth. Indeed, that lack explains the impetus for American Horror Project: Volume One, which sees three titles from the era buffed up and made presentable for the demands of cinephiles who now want nothing less than a film in its original, theatrical presentation, and for it to be accompanied by a boatload of extras.

Yet another, less naïve, explanation understands how the neglect of ‘70s horror derives from the valorization of the New Hollywood during the same period, as American cinema became Europeanized or, at least, brought European aesthetics to Hollywood studio films of the period. What’s dismaying, then, is how little has been written about the independent horror film as a more innovative locus of aesthetic change, one which challenges the very premise of an art-house/genre divide, but often does so not through Godardian alienation, but textual play with ideological questions—the status of the body, feminism, maternal angst. These films may take cues from the art house, but they aren’t following the trail of bread crumbs laid by the Nouvelle Vague and other transnational new waves.

A film like The Witch Who Came from the Sea, with its emphasis on the female gaze and the aftermath of childhood abuse, addresses these themes with a daring formal structure. In the film’s opening sequence, middle-aged Molly (Millie Perkins) sees, and is triggered by, weightlifting beefcakes on a desolate beach. Instead of simply utilizing eye-line matches for Molly’s field of vision, director Matt Cimber provides a mobile, omniscient camera to offer an absurdist presentation of muscle-bound masculinity, as if Molly’s eyes were capable of being detached from herself as the camera roams around, and frames, these bodies from a multitude of perspectives.

Cimber makes similarly reality-altering gestures throughout. When Molly, whose seduction and apparent murder of two men becomes the film’s narrative locus, writhes in ecstasy, the filmmaker distorts the soundtrack to hollowing effect, as if Molly’s taken her male catches to an underwater lair. Perkins anchors these traumas with simultaneous restraint and hysteria, and Cimber matches the character’s conflicted psychology not through expressionistic gestures, but by altering the film’s sensorial register, so that genre thrills start to bleed into larger, more abstract questions regarding mental health and bodily autonomy. With its emphasis on folkloric violence, the misogyny of fairy tales, and the powers of seduction, The Witch Who Came from the Sea is an essential, thematic precursor to The Fog and Under the Skin.

The Premonition implicitly challenges how art cinema of the ‘60s and early ‘70s typically utilizes female anxiety as a source of masochistic pleasure for the viewer, with Ingmar Bergman and Federico Fellini being the primary offenders. The film’s simple premise involves Andrea (Ellen Barber), a spurned mother and possible witchcraft practitioner, trying to reclaim (or, kidnap) her daughter, who’s been recently adopted by Sheri (Sharon Farrell), a demure housewife enjoying surrogate motherhood after years of trying to have children of her own. Such a melodramatic conflict could invite a simplistic resolution where the film’s allegiances clearly reside with one woman over the other, but there are no such reductive outs or ridiculing of these women here, nor a sentimentalizing of motherhood.

In fact, given that The Premonition is set largely within a carnival and opens with a sad(istic) clown named Jude (Richard Bell) dancing in almost abject, extreme close-up, director Robert Allen Schnitzer immediately foregrounds Fellini as a referent, but rejects the Italian director’s fondness for making childhood memories precious, as in The Clowns and Amarcord. Instead, a certain anti-nostalgia treats the circus as a symbol for the ways mythologies function to conceal murder and kidnapping. Moreover, it’s men who are hysterical or ineffectual, as Sheri’s vacant husband mostly watches from the sidelines and Jude emerges as the source of the film’s true madness, itself prompted by a challenging of his manliness.

More conventionally absurdist, though still acutely satirical, Malatesta’s Carnival of Blood rather unsubtly combines the premises of Freaks and Carnival of Souls into a phantasmagoric bloodbath, as a carnival barker named Malatesta (Daniel Dietrich) and a gaggle of cannibalistic ghouls led by Blood (Jerome Dempsey) feast on an unsuspecting family searching for their son. What resonates here isn’t the rote grindhouse premise, but director Christopher Speeth’s integration of silent cinema into the cannibals’ daily routine, as they’re seen watching The Cabinet of Dr. Caligari before a night of carnage. However, Speeth wisely refrains from making a direct correlation between cinematic spectatorship and violence, since horror films are but a piece of what invites bloodlust and, in reality, are likely not the culprit when images of dead soldiers in Vietnam litter the nightly news. A lost son to the institutional machinations of cheap thrills—an apt and devastating metaphor for American international diplomacy.

Arrow Video has gone to extensive restoration lengths to locate the “original film materials” in order to conduct each 2K transfer from a 35mm print or, in the case of The Premonition, Color Reversal Immediate (CRI), meaning that every phase of these films’ preservation has been overseen by the Arrow crew—a fact that makes this set all the more commendable and amazing. And image quality, on the whole, is excellent, though in all cases visible scratches, marks, and cigarette burns remain in sight, which suggests these defects could not have been removed without compromising the image’s original integrity. To those ends, the transfer for The Witch Who Came from the Sea fares the worst, while Malatesta’s Carnival of Blood looks like it’s received the most comprehensive scrubbing treatment, though it’s quite likely its negative was in better shape. All of these quibbles are relatively moot, however, since the color timing and 2K scans look utterly fantastic in widescreen and restored to an approximation of what audiences in the ‘70s saw upon release. Similarly, each audio track is serviceable and strong throughout, balancing dialogue and ambient sounds as a score, though there are noticeable pops and cracks here or there.

Each film receives enough supplements to be worth of an entire box set unto itself. Film historian Stephen Thrower offers a brief introduction for each film, in which he makes an argument for each film’s complexity and placement within the ‘70s horror canon. Three separate audio commentaries, all excellent, offer a different perspective on the value of these films. Film historian Richard Harland Smith’s commentary for Malatesta’s Carnival of Blood is the highlight, since he consistently provides insight across a spectrum of topics, including production locations and history, but best of all, he seems to love the film, and his infectious enthusiasm, tempered by level-headed context, makes for a compelling listen.

For The Witch Who Came from the Sea, a track with director Matt Cimber, actor Millie Perkins, and DP Dead Cundey settles into more conventional and leisurely terrain, as the trio let the film’s scenes dictate their recollections. Also, there’s a minor issue with the audio here, which sounds as if it were recorded in a large room with poor acoustics. The final commentary track features director Robert Allen Schnitzer, whose style tends to narrate what’s happening on screen, which occasionally leads to an aside about either Allen Schnitzer’s influences or the film’s production.

Two expertly composed featurettes, one for The Witch Who Came from the Sea and one for The Premonition, reconstruct a timeline for each film’s production from the recollections of those involved. Cimber and Perkins are especially acute and perception in their talks, which overviews the film’s tumultuous beginnings and struggles to find distribution. For The Premonition, Allen Schnitzer explains how he and writer Anthony Mahon added “metaphysical elements” to the script, while composer Henry Mollicone demonstrates, on his piano, how he used a pieces of classical music to construct his own score. Also included are three of Allen Schnitzer’s short films: Vernal Equinox, Terminal Point, and A Rumbling in the Land, as well as an assortment of trailers and TV spots for The Premonition.

There are interviews galore and most of them, miraculously, are contemporary. Christopher Speeth explains how he came to direct (and went broke making) Malatesta’s Carnival of Blood, as well as producer Richard Grosser’s essential role in gaining the film distribution. Writer Werner Liepolt talks about his collaboration with Speeth and how the film ended paradoxically far away from, and close to, their interest in documentary. Art directors Richard Stange and Alan Johnson complete the initial trio, detailing how their years spent at the University of Pennsylvania led to their participation in the film.

There’s also a brief interview with Cimber, who speculates on why his film continues to resonate with audiences and a brief archival chat with Allen Schnitzer, who repeats several of the points made during the newer featurette, and star Richard Lynch, who talks about the evolution of his craft over a 50-year span. Finally, each disc includes an assortment of outtakes and photo galleries, and the set contains a 58-page booklet with four essays, one on each individual film and one about the collection as a whole.

Arrow Video’s American Horror Project: Volume One is certainly a triumph of film-preservation efforts, but it’s also the label’s symbolic demand to unlock the auteurist prescriptions of many prestige, home-video releases. By shifting focus away from directors and more toward eras and curatorial sensibility, Arrow is implicitly asking for more adventurous (and ambitious) Blu-ray releases from outside of the Hollywood canon.

Blu-ray Review: Jacques Rivette’s Paris Belongs to Us on the Criterion Collection