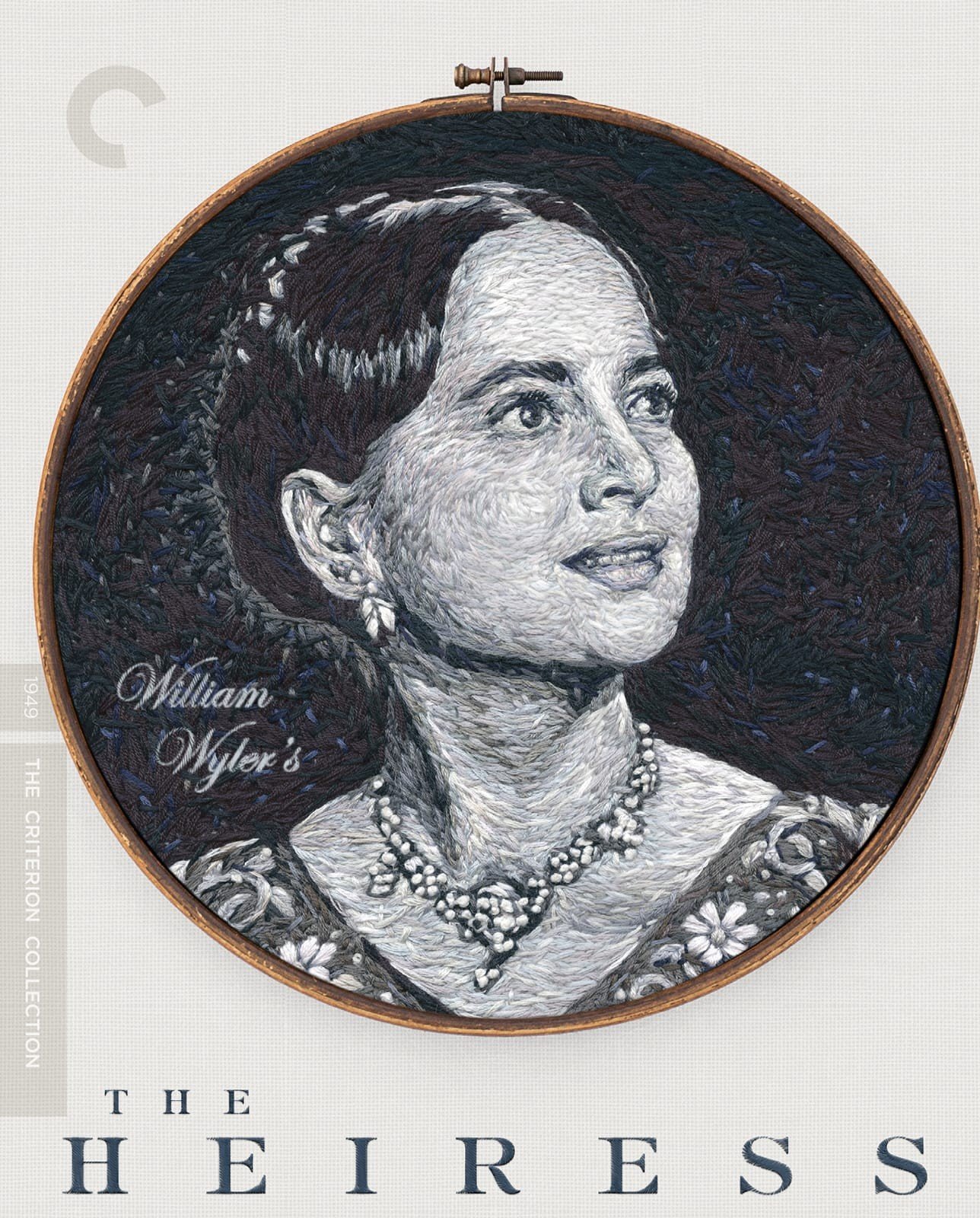 William Wyler’s The Heiress demonstrates the filmmaker’s keen eye for composition as a means of enhancing his actors’ performances. The spectacularly ornate home at the center of the film is befitting of the considerably wealthy Austin Sloper (Ralph Richardson). Yet the ample space left between objects in a room hints at a hollow, impersonal atmosphere that envelops Austin’s unwed daughter, Catherine (Olivia de Havilland). A plain, naïve, and shy young woman, Catherine comes across as a woman so socially awkward and insecure that the coldness of the family home seems comforting compared to the world outside.

Despite Catherine’s shyness, the young woman does want to socialize, and she accompanies her father one night to a party where she meets Morris Townsend (Montgomery Clift), the son of a local family in the Sloper’s aristocratic circle whose profligate spending has already decimated his inheritance. If Catherine’s array of nervous tics—widened eyes, reflexive but forced smiles—alienate her from others, Morris’s magnetism is such that everyone is drawn to him. He takes a keen interest in Catherine and effortlessly carries the conversation when she gets flustered and doesn’t know what to say.

De Havilland, who won an Oscar for her performance here, painstakingly captures Catherine’s manic, disbelieving glee at seeing a man talk to her, and in this moment, the camera moves more than it does for the remainder of The Heiress, not only in sync with the dancing at the party, but with Catherine’s sudden rush of infatuation. Morris thoroughly charms her and even puts on a face of mock dejection when a drunken old man cuts in for a dance, and when he calls on Catherine the next day, their courtship turns into an engagement in short order.

Catherine’s impending nuptials should be wonderful news for Austin, who’s struggled to find a suitor for his child, but he rejects the union on the grounds that he believes that no man as handsome and suave as Morris could possibly be interested in his dull, homely daughter, and as such must simply want her for her inheritance. The disdain that Austin reveals for Catherine shocks her to the core, and to make matters worse, her father may be right about Morris. The dual blow of discovering that the men in her life see her largely as an object is shattering, and if Wyler’s mostly static compositions first communicated her introversion, slowly they come to reflect her abject misery. Some shots endure for so long that you can almost see as Catherine’s sorrow and humiliation harden into bitterness in real time.

Wyler’s willingness to set up a shot with exacting formal precision, then cede prominence to the actors who move within the space of the frame, results in a multivalent study of not only the story’s characters, but of the classic Hollywood era’s markedly different styles of acting. Richardson portrays even Austin’s more subtle gestures of contemptuousness with the most theatrical of cadences. Elsewhere, Clift’s facility with intoxicating yet repellent characters stresses the ambiguity of Morris’s devotion, and the longer any of Morris’s scenes last, the harder it is to tell whether he’s manipulating Catherine or genuinely interested in her. There’s even the character-actress bawdiness that Miriam Hopkins brings to Catherine’s widowed aunt, whose genuine affection for her niece belies her own exploitative tendencies, as she lives vicariously through the younger woman’s romance.

Then, of course, there’s de Havilland. The actress was often typecast as homely characters, and here she upsets common expectations by pushing Catherine’s innocence to parodic levels before shifting into a tragic-heroine mode worthy of the cinema’s greatest depictions of emotional despair. The Heiress is mysterious when it comes to characters’ intentions, but it’s downright confrontational in the brutal impact of its protagonist’s struggle for social acceptance. The finale, in which Catherine finally gains agency in her life only by consciously walling herself up in the very home that previously served as her cage, is an act of cruelty perpetuated as much against herself as those who wronged her.

Criterion’s Blu-ray boasts a sparkling transfer with only a handful of noticeable artifacts. For example, some shimmering is evident in scenes due to the clashing patterns of the characters’ clothing. Otherwise, contrast is stable throughout, and detail is so sharp that the finest details of Edith Head’s costumes are plainly noticeable. The lossless mono track is faultless, with excellent dialogue clarity and no audible hisses or tinniness.

In an extended conversation, critic Farran Smith Nehme and screenwriter Jay Cocks extensively cover the film, from its influence on Cocks and Martin Scorsese’s The Age of Innocence to the manner in which Wyler’s mostly static, open compositions communicate the characters’ psychological depths. Also included is an episode of The Merv Griffin Show that pays tribute to Wyler and includes interviews with the director, de Havilland, Bette Davis, and Walter Pidgeon, as are archival interviews with de Havilland and Ralph Richardson. An interview with costume historian Larry McQueen covers Edith Head’s designs for the film, noting how Catherine’s style of dressing slowly changes with her emotional arc. An accompanying booklet contains an essay by critic Pamela Hutchinson that thoroughly breaks down the film, from its faithfulness to and divergences from Henry James’s Washington Square to its rich acting to Wyler’s sophistication as both a stylist and actor’s director.