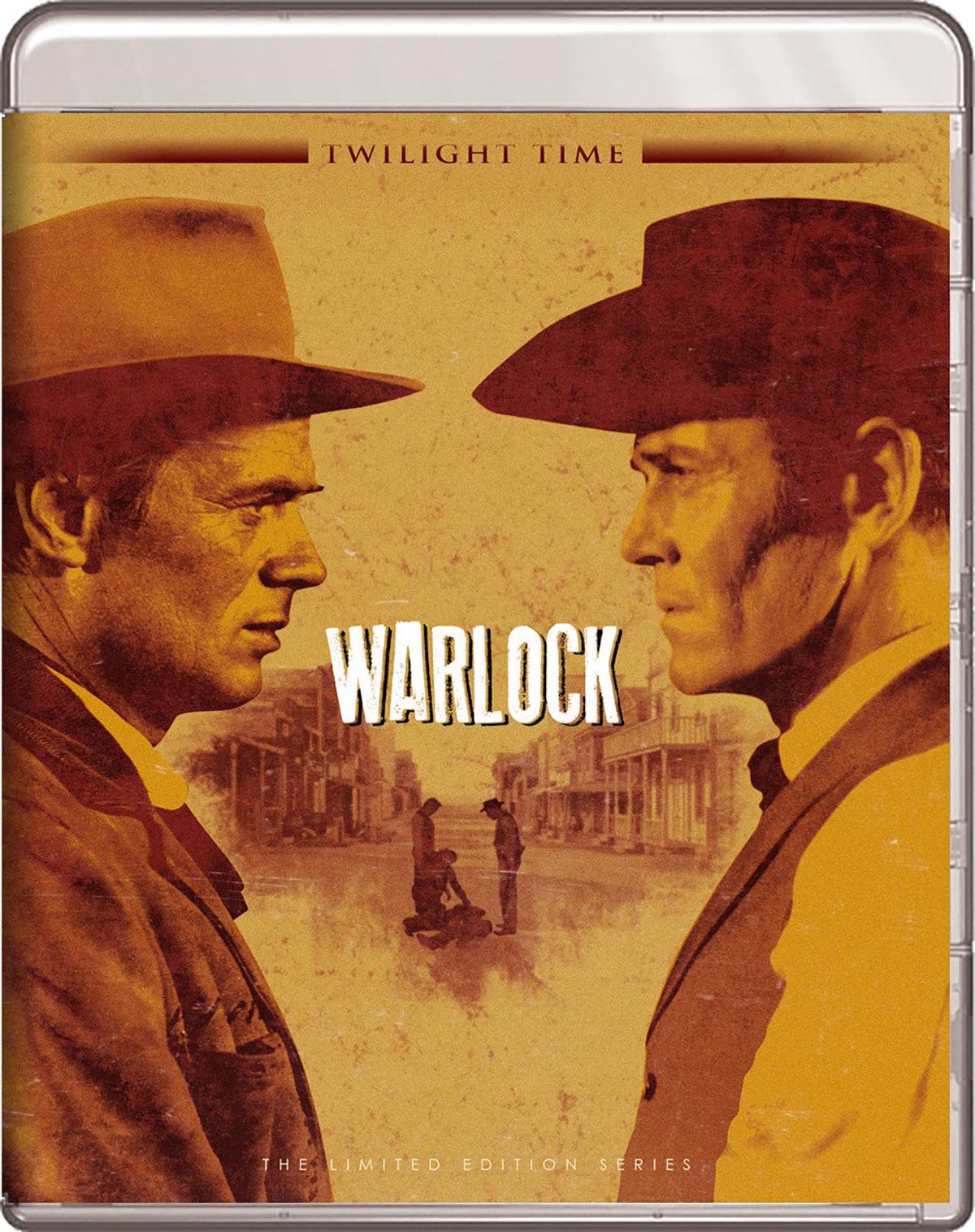 Edward Dmytryk’s Warlock, so abundant in richly drawn characters and moral ambiguity, is a meticulous deconstruction of western tropes, beginning with the heroic stranger riding into a troubled town. Indeed, when the stoic and implacable Clay Blaisedell (Henry Fonda) shows up in Warlock, armed with his famous pair of gold-handled Colt pistols and his loyal sidekick, Tom Morgan (Anthony Quinn), at his side, he’s understood to be the town’s last hope of ousting a ruthless gang of criminals led by Abe McQuown (Tom Drake). Clay’s arrival lays the groundwork for a clearly defined conflict between good and evil, with the legendary aging gunman set to stand up to Abe and his thugs, who’ve been holding Warlock’s citizens hostage for months, running multiple sheriffs out of town. But the film undercuts expectations at nearly every turn, as characters frequently shift allegiances, effectively blurring the line between good and evil.

Despite Clay’s seemingly honorable intentions, he’s certainly no hero, but rather a mercenary who trades law and order as a commodity, providing it for the hefty price tag of $400 a month, quadruple the salary given to the town’s sheriff. While his ruthless methods make him seem quite cynical, he’s a realist at heart, admitting to the citizens committee that hired him that they’ll inevitably come to resent and fear him for retaining the power they hand over to him in desperation. And, of course, he’s right. But the film’s thorniest dramatic entanglements arise neither from Clay’s uneasy alliance with the people of Warlock nor his ongoing conflicts with the McQuown gang, though the latter makes for a few outstanding action set pieces.

Instead of gun fights, it’s the psychological interplay between Clay and Tom, whose partnership grows increasingly tumultuous, that takes center stage. Tom, the Doc Holliday to Clay’s Wyatt Earp, worships his friend and remains as committed to establishing him as a living legend as he does to moving on to other towns in order to rake in as much money as possible. But even though Tom’s affection is genuine—he almost tearfully admits that Clay was “the only person who looked at [him] and didn’t see a cripple”—he plays dirty behind his partner’s back, setting up murders that might otherwise be unnecessary simply to protect his idol. And when Clay finds himself smitten with Jessie (Dolores Michaels) and talks of hanging up his spurs and settling down in Warlock, Tom’s mix of anger and melancholy is palpable.

The rift between the men is further widened when Clay finds himself in another thorny alliance, this time with Johnny Gannon (Richard Widmark), a world-weary thug who finally leaves the McQuown gang after they slaughter 37 cattle herders, and surprises even himself by accepting the open offer to serve as Warlock’s official sheriff. Johnny’s transformation is as close as this otherwise sobering, pessimistic film comes to sketching a redemptive arc, but even he remains conflicted to his core, struggling to balance his burgeoning desire for uncompromised law and order and his emotional attachment to some of McQuown’s men, specifically his little brother, Billy (Frank Gorshin). The resulting showdown among Tom, Clay, and Johnny sees the men applying morally dubious methods as they vie to implement their own versions of justice in Warlock. But justice remains an elusive ideal in this rough, little frontier town where the cycle of violence continues unabated no matter who’s in charge.

Near the end of Warlock, it’s Tom, as the audience surrogate, who hammers home the film’s final blow to the mythmaking that drove so many Hollywood westerns of this era. In a last-ditch attempt to secure Clay’s status as a town legend, Tom keeps him alive by holding him at gunpoint and preventing him from fighting McQuown’s men once again. Afterward, Tom gleefully says, “You’ll be a hero again. That’s all I want Clay. I’ve won.” In disgust, Clay replies, “All right, you’ve won. We’ll play this out to the end just as you want it.” But Tom’s optimism is revealed as a delusion and Clay, who resigns himself to the inescapable transience of his way of life, doesn’t deliver the happy ending the viewer has no doubt come to expect. Instead, he leaves behind everything that’s made him a legend and rides into the horizon to yet another town—and without the girl, his partner, or his trusty gold-handled pistols.

Warlock has a color scheme that’s familiar from so many ‘50s westerns, where the earthy tones of dirt and dust are intertwined with the vibrant colors of high-end saloon interiors, expensive fabrics, and big, blue skies. It’s a tricky palette to correctly color balance, but Twilight Time’s transfer is up to the task, retaining the richness of the primary colors without amping up the brightness of the entire image. There are a handful of shots that are less than sharp, especially in some of the wider exterior scenes, though this flaw, but the flaw is infrequent enough to never be distracting. Overall, there’s a solid contrast to the image, and a bit of the grain from the 35mm is held over to provide a bit of depth and prevent the picture from appearing overly digitized. The lossless audio tracks are very clean, and mixed robustly enough to never miss the various aural details during the chaotic shootout sequences.

The disc extras are pretty meager, consisting only of the original theatrical trailer, the brief Fox Movietone Newsreel that shows the stars at the film’s premiere, and an isolated music track. A small booklet is included with an essay by Julie Kirgo, who makes a case for the film’s homoerotic subtext between Clay, Tom, and Johnny, while also covering the film’s subtle tale of morality and themes of redemption and justice.

Blu-ray Review: William Wyler’s The Heiress on the Criterion Collection

Review: Agnès Varda’s One Sings, The Other Doesn’t on Criterion Blu-ray