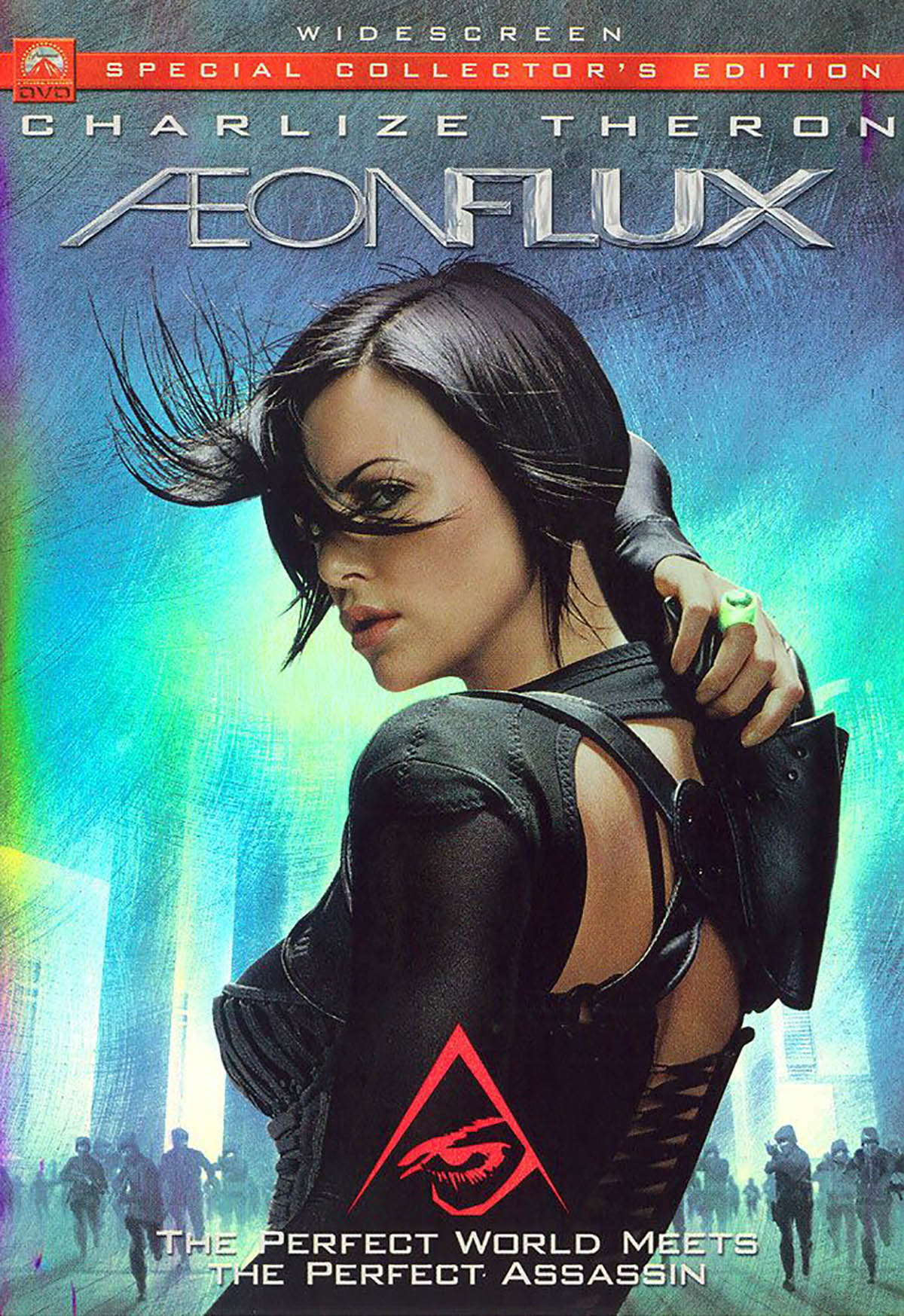 An estrogen-energized companion piece to Michael Bay’s The Island, Karyn Kusama’s Aeon Flux (based on the obscure mid-’90s MTV cartoon) assumes an anti-establishment sci-fi façade in order to promote alarmist slippery-slope anti-science attitudes. In 2415, with the Earth’s surface having been overrun by vegetation and 99% of its population decimated by a super-virus, humanity’s survivors lead blissfully ignorant lives in a walled-off city called Bregna that’s ruled by Trevor Goodchild (Marton Csokas), descendent of those who discovered the virus’s cure. In response to citizens periodically disappearing without a trace, a band of militant rebels (led by Frances McDormand, sporting a tangle of orange hair) dedicate themselves to overthrowing a government they believe is up to no good, but their plans to execute Trevor are sabotaged when their top operative Aeon Flux (Charlize Theron), a sexy, slender, Amazonian hybrid of The Matrix’s Neo and a ninja, fails to follow through on her assassination assignment. Decked out in black form-fitting, cleavage-revealing futuristic outfits and prone to standing with her legs spread provocatively apart, Theron’s Aeon is a gun-wielding babe in the mold of Kate Beckinsale’s Underworld ass-kicker, and, predictably, Kusama’s camera spends most of its time drooling lasciviously over her fine figure.

From its biomechanical flora imagery to its new-wave Japanese art design, Aeon Flux strives to be a live-action animé, an impression further confirmed by its narrative’s underlying distrust of technological progress as dehumanizing. After refusing to kill Trevor, Aeon—spoiler alert!—learns that everyone in Bregna is a multi-generation clone. Worse, despite Trevor having successfully spawned natural pregnancies, his evil brother Oren (Jonny Lee Miller) wants to maintain the cloning status quo in a diabolical effort to achieve eternal life. With Aeon’s flight over the hellishly sterile city walls into the surrounding Eden-ish jungle portrayed as a “leap of faith” designed to bring about a society where everyone lives “only once, but with hope,” the film reveals itself to be a not-so-subtle screed against stem cell research. That hope is derived from belief rather than knowledge is part and parcel of Aeon Flux’s conservative outlook, in which genetics is the province of monsters (or misguided fools) intent on transforming mankind into inhuman cyborg “ghosts.” And yet in a truly shocking twist, such an anti-science stance isn’t even the most distasteful facet of Kusama’s lame-brained action-adventure. That honor goes to the sight of an African-American warrior (Sophie Okonedo) with hands for feet, a distasteful vision of the archaic blacks-as-monkeys stereotype that truly takes the repugnant cake.

Aeon Flux’s image cannot be good for the eyes. The print is clean and the colors are succulent, but there’s all sorts of ugliness and rattling around the edges of people, places, and things. If there’s a diagnosis here it’s that the film is pumped with so much CGI, no DVD production house probably knew how to calibrate the thing. Where to begin? How about nine minutes and 10 seconds into the film: Pause the image and advance slowly and behold as the droplet of goo that falls from the ceiling leaves behind an awful digital streak. Nearly unwatchable if you ask me. The upside? Sound is outstanding!

Not one but two completely unnecessary commentary tracks: one by a dead-serious Charlize Theron and producer Gale Anne Huro, who spend much of the track reminding us of the film’s MTV roots and its real-world resonance, the other by writers Phil Hay and Matt Manfredi, who are more personable but equally delusional about the film’s quality. Rounding out the disc is the film’s theatrical trailer, a bunch of previews, and five thorough featurettes that focus, among other things, on the

It fluxes all right, from bad to the total pits.