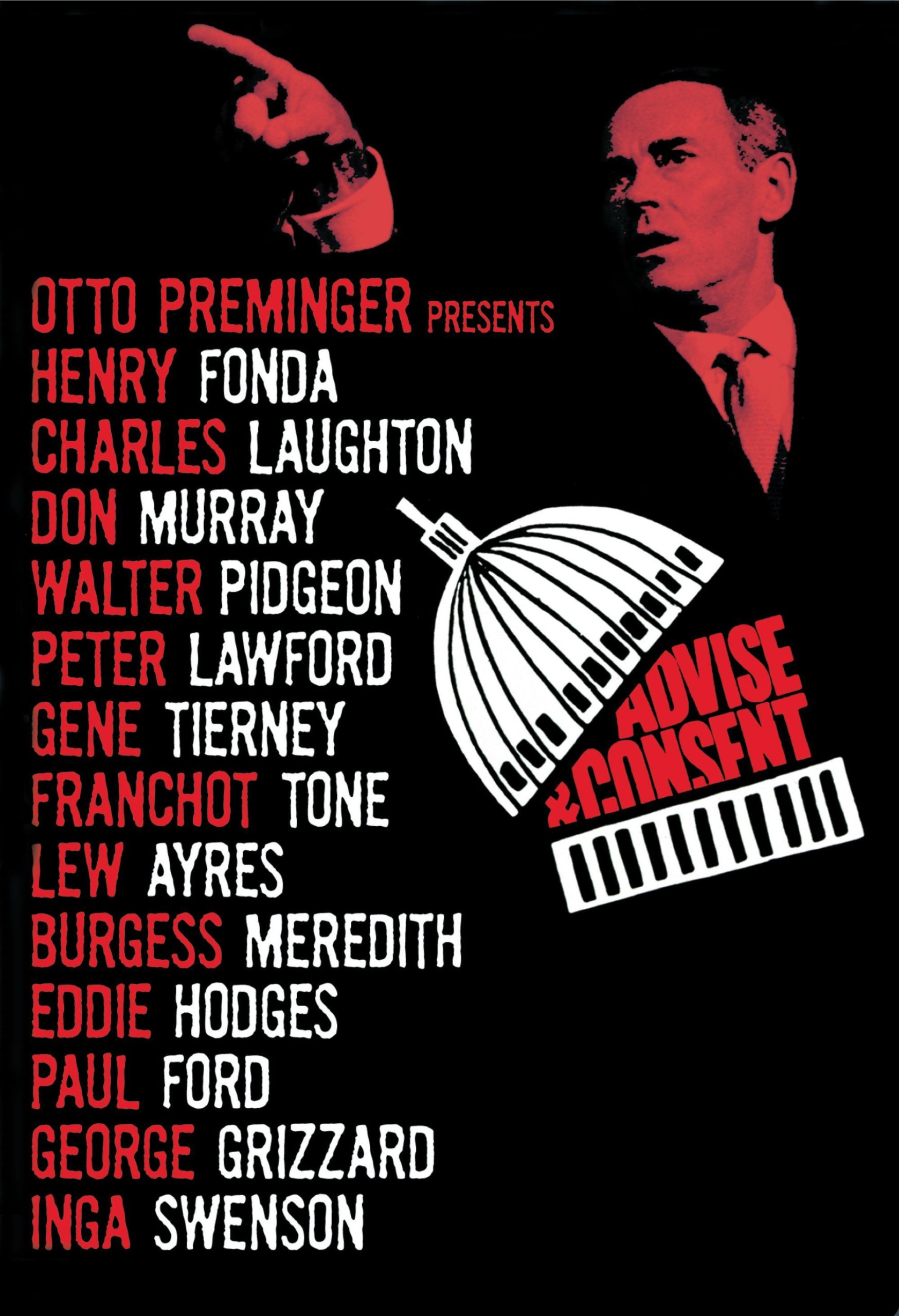 An informative May 15, 2005 New York Times article by Frank Rich (hysterically titled “Just How Gay is the Right?”) unpacked Advise and Consent—not only the magnificent 1962 film directed by CinemaScope svengali Otto Preminger but also the original bestselling novel by Allen Drury (so popular among high school English students at one point in history that it placed some 10 slots higher on a list of “most influential books” than the Bible)—for its still-prescient angle on the sacrificial lambs of American politics; namely, the homosexuals. In the plotline, a subcommittee to confirm the secretly ailing U.S. President’s nomination for Secretary of State finds itself battered not only from public accusations that the nominee, Robert A. Leffingwell (Henry Fonda), is a Communist sympathizer but also the ongoing private blackmailing of the subcommittee chair Sen. Brig Anderson (Don Murray) over his long ago homosexual dalliance with a fellow soldier.

Though the near half-century in the interim between Consent’s appearance in the aftermath of the McCarthy witch hunts (which smoked out Communists and homosexuals with nearly equal vigor) and the here and now has seen a very small handful of Barney Franks to oppose the Trent Lotts and Rich Santorums (represented in Consent by Charles Laughton’s terrifying Sen. Seab Cooley), Rich states that “unprincipled gay-baiting has mushroomed into a full-fledged political movement. It’s a virulent animosity toward gay people that really unites the leaders of the anti-‘activist’ judiciary crusade, not any intellectually coherent legal theory (they’re for judicial activism when it might benefit them in Florida). Their campaign menaces the country on a grander scale than Drury and Preminger ever could have imagined: it uses gay people as cannon fodder on the way to its greater goal of taking down a branch of government that is crucial to the constitutional checks and balances that Advise and Consent so powerfully extols.” Notably shading Rich’s argument is the fact that nearly every power play and tactic undermining the Majority party from accomplishing its goal of confirmation comes from various subfactions in their own party, dog-eat-dog fashion. As any lonely homosexual can tell you upon leaving a gay club empty-handed, gay people’s worst enemies are often other gay people.

So there’s that. But for those who don’t know Alger Hiss from Alan Sues, Preminger’s filmed version of the novel makes up for the various excised subplots and legal-procedural nitty-gritty with a typically unerring sense of spatial intrigue. Preminger’s visual savvy turns that most staid and insufferable of social terrariums, the floor of the U.S. Senate chambers, into a vibrant, perpetually shifting Voronoi diagram, charting the variables of influence and repulsion based on something as cinematographically and topographically malleable as the positions of the senator’s desks. The primary triangle belongs to Walter Pidgeon (as Senate Majority Leader Robert D. Munson, his party’s cool and collected foundation), Will Gear (the wan but resolutely oppositional Senate Minority Leader Warren Strickland) and the aforementioned Laughton in his final film performance. A character actor performance ne plus ultra, Laughton’s unflappable and jowly approach to senate politics (apparently based closely on the cadence of the contemporary Senator from Mississippi John Stennis), using passive-aggressive smears and the wind-up pitches of other Senators as his forum for “fire and brimstone” (his morning breakfast, as one character jokes), would be all the more entertaining if not for the nagging suspicion that his example all but wrote the blueprint for the chambers’ “Family Values” crusaders to follow, first and foremost one Jesse Helms. Unlike that old buzzard Seab Cooley, though, U.S. Senators outside of Hollywood pictures still haven’t learned the art of eating crow for the greater good.

Preminger’s framing is tighter than Burgess Meredith’s jittery performance as the stoolie corralled by Seab Cooley to testify against Leffingwell’s political allegiances at the subcommittee hearings. It’s so tight that Warner Home Video’s anamorphic widescreen DVD presentation is bound to look inadequate on most television sets thanks to that goddamned overscan. If you have the option, I’d say watch this particular DVD on a computer monitor if possible. The contrast of the black-and-white picture looks a tad crushed, without particularly gleaming whites on one end or deep blacks on the other, but the print is extremely clear and, whiffs of edge-enhancement aside, looks pretty fantastic. The sound is serviceable, though Jerry Fielding’s score, alternately patriotic and (during the homo blackmail sequences) horrorshow, gets a tad shrill sometimes.

I made more than enough fun at the expense of the honorable Drew Casper in my review of the White Heat DVD. So, suffice it to say that the guy is an unabashed Preminger enthusiast and, so he claims, shows at least one Preminger film in any class he teaches. And his commentary track for the fairly lengthy film never really runs out of gas (despite a few dead spots that last for a couple of minutes), though it rarely directly addresses what is happening on the screen. And you can just hear the aroused excitement in his voice; that saliva-drenched enthusiasm that makes one beg of Casper, “spit or swallow!”

Advise and Consent’s near-mathematical approach to political intrigue is a great argument in favor of big government.