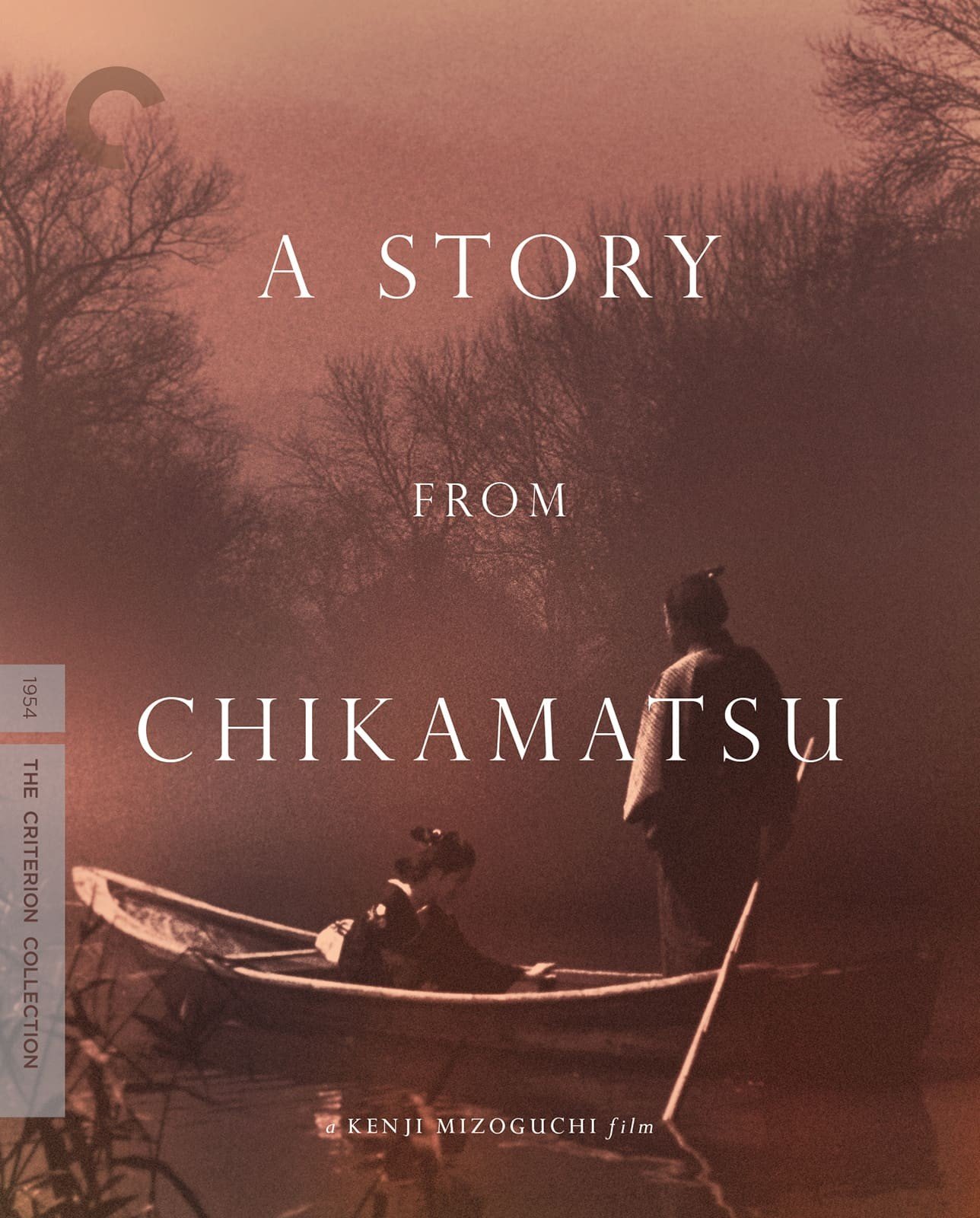 Kenji Mizoguchi’s late-career masterworks Ugetsu and Sansho the Bailiff unfold with an existentially freighted sense of contemplation, allowing us to ponder the relationships between the oppressed characters and the expansive land that contain them. By contrast, A Story from Chikamatsu proceeds at a furious pace, succinctly establishing a dense thicket of betrayals that spring from a series of nesting infrastructural hypocrisies governing 17th-century Japan. The Kyoto of Mizoguchi’s 1954 film is a city riven with classist and sexist double standards, which are maintained by an ingrained surveillance state that keeps every citizen, poor as well as rich, in a state of panicked fever. In such a rigidly un-empathetic climate, small misunderstandings beget tragedy.

Based on the work of renowned Japanese playwright Monzaeon Chikamatsu, A Story from Chikamatsu revels in a thorny notion of poetic justice. Villains in narrative art are often understood to receive their comeuppances out of a sense of cosmic order—because, in other words, they deserve it. But the wealthy and highly connected scroll-maker Ishun (Eitarō Shindō) eventually comes to ruin for two reasons: because his mercilessness splinters his family, creating opponents within his own house, and because his superiors are equally cruel and hypocritical. Which is to say that Mizoguchi understands Japan to exist as an animal kingdom. The right people are occasionally punished because all, except for those at the very top, are punished.

Mizoguchi drops us without preamble into the house of Ishun, which is busy making calendars for royalty. In bursts of dialogue, we learn that Ishun is a master wheeler and dealer who’s cornered the market on scrolls, enjoying the Emperor’s exclusive patronage. Finely detailed compositions emphasize the lines separating Ishun’s personal house from his business, as well as the fashions in which these compartments chaotically collide. Mizoguchi lingers on apprentices, salesmen, managers, and various couriers and servants as they bustle through Ishun’s house, fashioning lively and overflowing multi-planed images that are characteristic of his late-period filmography. Mizoguchi casually establishes the fear of judgment that governs this society, which enslaves its citizens in catastrophic debt while punishing mid-level businessman for usury so as to enslave them in said debt as well, after they’ve performed their own suppressive duties.

Amid this complex intermingling of business and politics, Mizoguchi charts a romantic quadrangle that explodes the tensions of this society. Ishun, a womanizer who celebrates the execution of women for infidelity, makes overtures to one of his servants, Otama (Yôko Minamida), who’s in love with Ishun’s finest printer, Mohei (Kazuo Hasegawa). In a brutally concise gesture that communicates more physical violation than most films’ more explicit passages of sexual violence, Ishun slides his hand up and under the fabric covering Otama’s arm, referencing past visits to her bedroom. Otama tells Ishun that she’s engaged to Mohei, who later resists the subterfuge presumably out of loyalty to his master, though in reality he’s in love with Ishun’s wife, Osan (Kyôko Kagawa).

In one of the film’s many chilling counterpoints, Mohei insists that Otama fulfill all duties of her servitude, while a samurai’s wife and her lover are paraded through a street outside of Ishun’s home on the way to their execution. Mizoguchi underscores a ruler’s privilege to enjoy what for others constitutes a merciless death, and this sequence climaxes with a shockingly explicit shot of the crucified lovers, which has a pared-down sense of iconography that would clearly inspire Martin Scorsese’s Silence.

The loyalties ricocheting throughout Ishun’s house are physicalized by the film’s precise images, which emphasize order and decorum at the cost of humanity. Mizoguchi utilizes his famous flowing compositions, emulating the distance of scrolls and theater, though he occasionally breaks this aesthetic to purposefully jarring effect. When Otama lies for Mohei, in order to cover up his own lies for Osan, Mizoguchi briefly cuts to a close-up from Osan’s face to Mohei’s, signifying their subsequent union as well as their new partnership in love as well as deception. This highly emotional sequence alludes to the intimacy that’s often leeched out of the film’s masterfully choreographed interior spaces. And this sense of constriction also recalls the formality of other famous Japanese films, such as Akira Kurosawa’s High and Low and Kon Ichikawa’s An Actor’s Revenge, which are likely indebted to Mizoguchi.

If A Story from Chikamatsu lacks the supple majesty of Ugetsu and Sansho the Bailiff, it’s because the former’s sense of exterior space isn’t quite as inspired as that of the other films. A Story from Chikamatsu loses a bit of its volcanic sense of repression when Mohei and Osan become lovers on the lam, though a few of the countryside landscapes are as astonishingly evocative as one would expect from Mizoguchi, especially a wide, vertical shot of a hillside as Mohei attempts to flee Osan so as to save her. Yet it’s the venality of ancient Kyoto that most commands Mizoguchi’s imagination here, and audiences may weirdly miss its extraordinary aura of everyday evil.

The image has a bit of attractive grit, and details of the actors’ faces can sometimes be (appealingly) soft, but the compositions here have generally been rendered with a piercing clarity that honors the film’s formal beauty and exactitude. Foregrounds are particularly sharp, giving the images’ bold through lines—staircases, pillars, hills—the prominence they warrant. The whites of the image are also robust and easy on the eyes, emphasizing the theatrical brightness of the various scrims within the frame, such as of translucent windows and doorways. Meanwhile, the monaural soundtrack is pointedly crisp, emphasizing the musicality that bridges the dialogue with the non-diegetic instrumentation.

In “Mizoguchi: The Auteur Behind the Metteur en Scène,” film scholar Dudley Andrew offers a brilliantly precise examination of the filmmaker’s aesthetic, particularly the debt that A Story from Chikamatsu owes to Bunraku puppet theater. Andrew discusses Kenji Mizoguchi’s images, use of music, and his practice of literally serving as a puppet master, correcting actors’ gestures mercilessly from right outside of the camera’s boundaries. (Explaining the filmmaker’s direction, Andrew calls Mizoguchi an “inhumane humanist,” which pinpoints the paradox of many great artists of all mediums.) A short new interview with actor Kyōko Kagawa presents a more flattering portrait of Mizoguchi’s on-set practices, and she also speaks of the challenges of playing a married woman and adopting a Kyoto dialect. Rounding out a slim but significant supplements package is an essay by film scholar Haden Guest, who describes Mizoguchi’s influences and formalism in visceral and illuminating detail.

Criterion’s spare but beautifully detailed restoration of A Story from Chikamatsu will hopefully allow the film to enjoy the attention that’s been accorded to other Kenji Mizoguchi masterworks such as Ugetsu and Sansho the Bailiff.