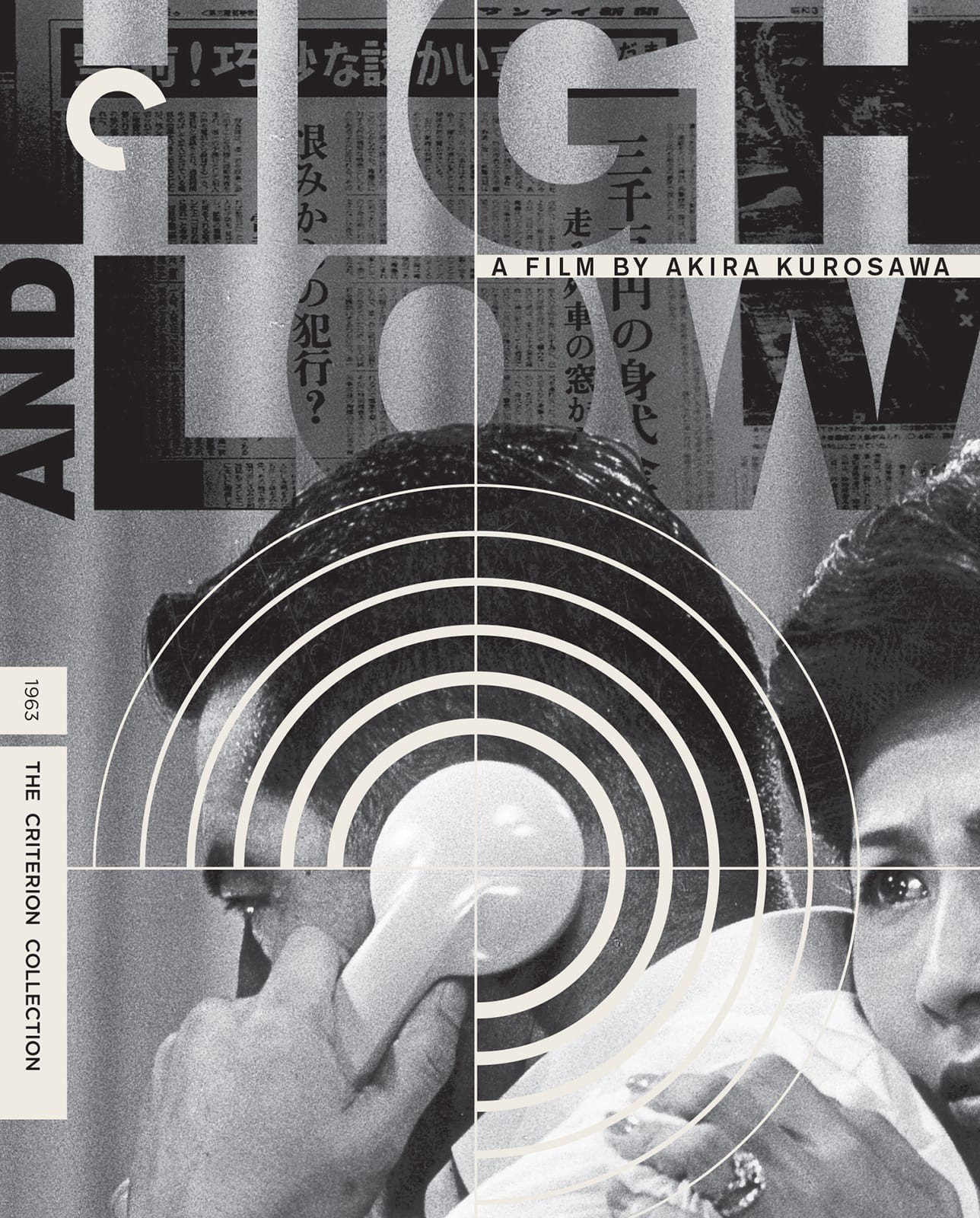 Akira Kurosawa’s classic ronin heroes brandished samurai swords and long bows to achieve victory over their evil foes. The conflicted modern-day professionals populating his masterful crime drama High and Low don’t have the luxury of such black-and-white confrontations. These men live in a complex world ripe with ideological contradiction and corporate greed, a suffocating post-war landscape split apart by social unease. Whether it’s the tortured businessman Gondo (Toshirô Mifune), the focused Inspector Tokura (Tatsuya Nakadai) and his squadron of dedicated police, or the brutal kidnapper (Tsutomu Yamazaki) hounding them both, each finds absolution in the way of the pen, paper, or gun. In turn, investigatory process and rational thought become Kurosawa’s new duels for supremacy, stretching what initially seems like a straightforward procedural to the level of Shakespearean tragedy.

If High and Low teaches us anything it’s how quickly the tone and perspective of a great story can shift. Kurosawa turns point of view into a boomerang, jumping back and forth between multiple characters depending on the narrative trajectory. After an opening credits sequence where the cityscape of Yokohama is completely flattened by a telephoto lens, Kurosawa immediately thrusts the viewer into the first of many verbal sparring matches. This initial 45-minute sequence takes place entirely in the posh hillside home of Gondo, the factory manager of a behemoth shoe company called National Shoes, as he experiences a drastic tonal shift firsthand.

Surrounded by three corporate thugs looking to institute a hostile takeover of their company, Gondo listens carefully as these vipers spit greed and deception. Instead of wilting, Gondo throws the group out, stunning his traditional wife Reiko (Kyôko Kagawa) and loyal secretary Kawanishi (Tatsuya Mihashi). From here, a series of calls begins a thrilling roller-coaster ride that won’t stop until the credits roll. After speaking with a mysterious person on the phone, Gondo confesses he plans to buy the company himself, having secretly acquired stock over the last few years. It’s a rare moment of levity for Gondo in High and Low, and it passes almost immediately. Another ringing phone changes everything, bringing devastating news that his chauffeur’s son has been kidnapped, snatched because he was mistaken for Gondo’s own boy. An obscene ransom is demanded, and Gondo must decide whether to pay the large sum and save the child, or refuse and avoid financial ruin. The moral dilemma is simple on the surface, but Kurosawa examines every pressure-packed detail of Gondo’s decision-making process.

The motive behind the crime remains ambiguous throughout Inspector Tokura’s intricate investigation, even when Gondo decides to pay the ransom and ensure the child’s safety. But there are multiple references to class division cluing the viewer in on a collective resentment toward wealthier Japanese. The high-angle position of Gondo’s house becomes a symbol for this anger, and even one of the policemen calls it “repulsive.” From here, a daring set piece aboard a moving train orchestrates the movement of cops, criminals, and victims, but all the pomp and circumstance only brings surface-level closure. High and Low’s narrative focus then descends into the blue-collar perspective where the post-event investigation highlights the everyday detective’s meticulous pursuit of the kidnapper.

Adapted from Ed McBain’s novel King’s Ransom, High and Low dedicates itself to the art of the rigorous pursuit, both of truth, revenge, and redemption. The social conundrums introduced in Gondo’s decision filter out to the other characters, and the police often invoke his suffering as inspiration for their investigation. “For Mr. Gondo’s sake,” one officer says, ironic considering the disdain they held for the man early in the film. But High and Low is all about destroying the walls of class and perspective so that each group may see their opposite more clearly. Gondo’s plight and suffering become a rallying cry for the demolition of social obstacles.

Throughout High and Low, the specter of off-screen corporate malfeasance becomes the film’s true villain. These passive-aggressive “assholes,” as described by one dedicated old-school officer, are exposed as malevolent creatures with “no sense of public opinion.” Invariably, the kidnapper envisions Gondo as an integral part of this hateful uncaring brood. By the time the two men finally meet, divided by a glass wall inside a prison visiting room, their superimposed reflections show the power of disillusion that can destroy both rich and poor alike. A series of scathing exchanges follow, the kidnapper confessing: “From my tiny room your house looked like heaven. I came to hate you more and more each day.” A lifetime of poverty, mixed with a penetratingly close proximity to the glitzy other side of the tracks, created this particular class monster.

High and Low ends with a metal divider slamming shut, permanently separating Gondo from his psychologically fractured tormentor. But his deranged screams can be heard through the barrier, still lingering in Gondo’s subconscious. Not only does High and Low successfully bridge competing vantage points and motivations, it establishes an evocative discourse on class by demystifying classic genre conventions. Professionals and regular citizens are all pawns attempting to survive in the same unbalanced society that values the bottom line over scruples. They’re no longer archetypes, but human beings. In High and Low, the honor of the samurai code evolves into something far more complex and rich. Kurosawa finds this essence by filling the widescreen frame with as many bodies as possible, allowing the social subtext to rise above and become a new form of verbalized swordsmanship.

Criterion’s crisp 1080p hi-def transfer of High and Low attains a level of detail that makes Akira Kurosawa’s widescreen visuals flourish. This is most evident during the sequences in Gondo’s expansive house on the hill, where the vast interiors seem to go on forever. Tense close-ups of Toshirô Mifune’s expressive face also benefit from the added clarity, making his interior morality play all the more kinetic. Since most of the emotional suffering in High and Low is stoic and internal, Kurosawa hovers closely on the character’s eyes, and now more than ever the viewer can clearly pinpoint each narrative shift through their reaction-shots. The 4.0 DTS-HD MA is very well mixed, especially considering the multiple layers of sound (ringing phones, clock chimes, traffic, dialogue) that overlap in some of the more dramatic moments. Trying to read the pale subtitles over the equally bright background gets difficult at times, but never makes any of the dialogue obtuse.

Unfortunately, this Blu-ray edition of High and Low doesn’t contain any extras that weren’t already featured on the 2008 DVD Criterion edition. Still, film historian Stephen Prince’s audio commentary nicely outlines the social atmosphere in 1960s Japan where kidnapping cases influenced Kurosawa’s storytelling process. Prince also goes in depth on Kurosawa’s mastery of the widescreen frame, but his flawless oration suggests a pre-planned lecture, which doesn’t make for the most organic commentary. Also featured is a 37-minute documentary from the “Toho Masterworks” series, “Akira Kurosawa: It is Wonderful to Create.” The overly romantic doc begins with Kurosawa musing, “A truly good movie is interesting and easy to understand,” and the filmmaker’s continue to fawn over a nostalgic view of his films as pop culture. A rare Toshirô Mifune interview on a Japanese show called Tetsuko’s Room contains what has to be one of the most bizarre openings of any television show. Still, it’s great to see the ageless Mifune discuss all things cinema, including his tireless worth ethic. Finally, a lovely and telling interview with actor Tsutomu Yamazaki shines some light on Kurosawa’s direction process with actors. “He saw through me completely,” Yamazaki confesses, remembering his time with Kurosawa with genuine admiration and fondness. Also included: theatrical trailers and a booklet with an essay by critic Geoffrey O’Brien and an on-set account by Japanese-film scholar Donald Ritchie.

High and Low is a masterful cinematic elevator connecting two warring social perspectives, finding a common ground between them in the pressurized corners of the classic crime drama.