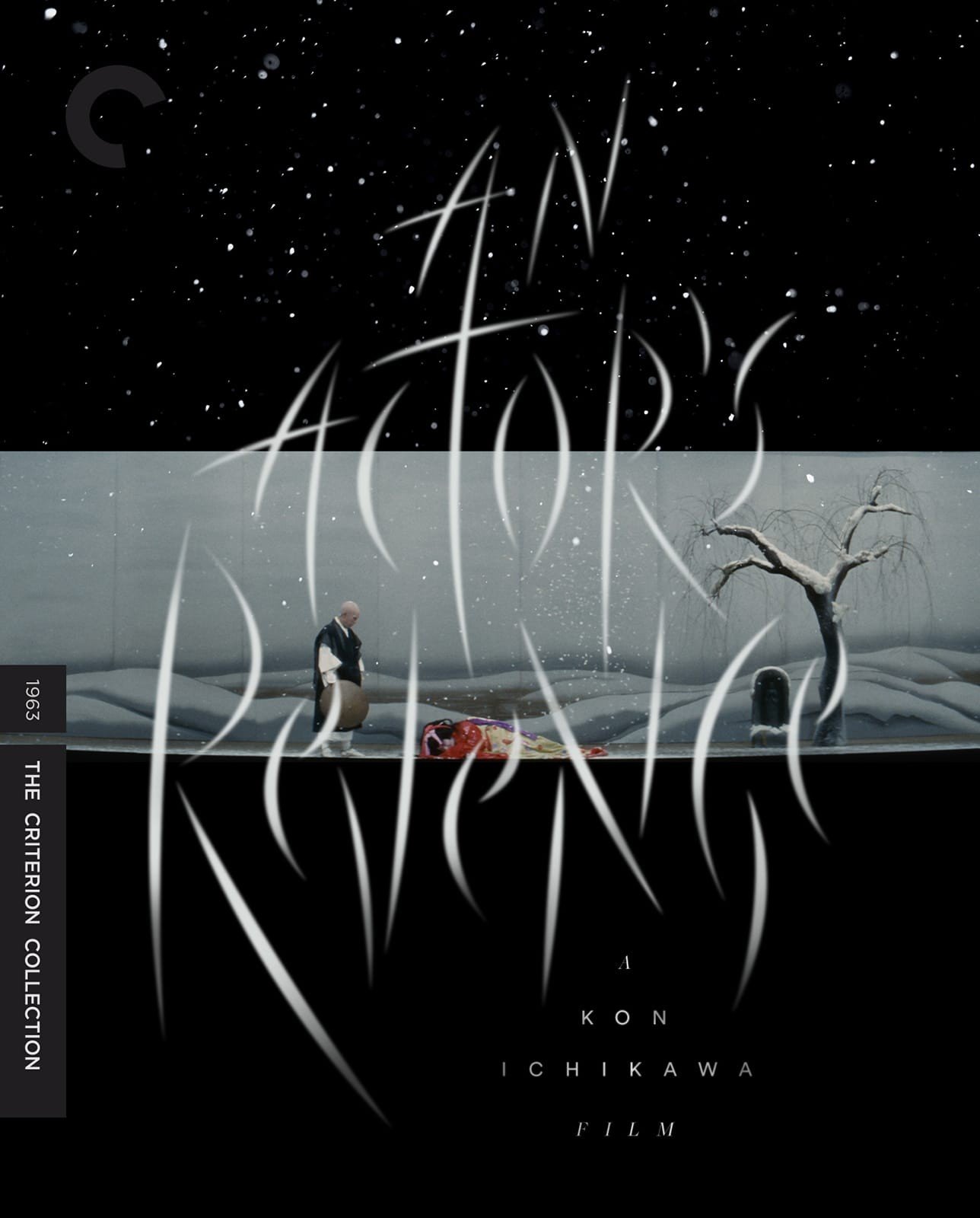 Kon Ichikawa’s mind-blowing An Actor’s Revenge is concerned with doubles and triples, with nesting forms of art and identity, and with history as a circular and self-devouring string of miseries. The film is itself a double, a remake of a trilogy by Teinosuke Kinogasa, with Kazuo Hasegawa reprising roles that he first played in 1935. Which is to say that Hasegawa has been afforded the opportunity to double back on himself, and such doubling continues with his twin roles: as Yukinojo, an onngata, or kabuki actor who plays female characters, customarily adopting female mannerisms in his personal life; and as Yamitaro, a robustly charming thief.

There are two more thieves in addition to Yamitaro, and three men of power on whom Yukinojo exacts revenge. Three cities are of importance to the narrative, and there are two women, who each become infatuated with the androgynous Yukinojo, pulling and twisting the film’s narrative into dizzying prisms of lust, resentment, and violence. And another duality holds An Actor’s Revenge all together: between kabuki and cinema, which are shown here to collectively forge and subvert Japanese history and politics.

The plot starts in media res, and we first see Yukinojo on stage as a doomed woman in a glistening white snowscape that fills the entire screen, as Ichikawa highlights the similarities in shape between the kabuki stage and the film’s scope frame. Yukinojo notices two of his enemies among the audience, whom Ichikawa irises in and out on, creating spotlights that are superimposed over the snowscape. These old tricks may seem exhilaratingly alien to contemporary viewers, as Ichikawa weds silent-film techniques with kabuki with a debauchedly colorful Cinemascope production, fashioning an astonishing aesthetic of borrowed parts that suggests a realm of living art.

These irises isolate Yukinojo’s enemies from the theater, implying that the simulations of the stage are temporarily real and that Yukinojo is actually surveying his prey from a winter wonderland. Ichikawa physicalizes the notion of a role as a fleeting reality for an actor, then, as Yukinojo is, for a spell, the woman he’s playing while on stage, just as he must psychologically become a subservient actor so as to destroy his enemies. Hasegawa’s performances often dramatize the simultaneous pain and exhilaration of carrying around multiple personalities, which are to be assumed and discarded in precise conjunction with varying settings—an idea, of course, that’s familiar to people of many cultures. For Yukinojo, revenge is temporarily freeing for allowing him to fashion new roles, assuming the voices of his destroyed parents in sequences that suggest Hamlet if it was to be restaged as a lurid horror film. Though such freedom comes with the potential price of hollowness, as there may be nothing to replace characters who overstay their welcome.

Ichikawa continually affirms the possibilities of the world as a stage, inhabited by people of multiple personalities who embody the Buddhist principle of possessing no true self. There are no real locations in this pointedly artificial film, and it’s occasionally difficult to distinguish the sets within the kabuki play and theater from those signifying the outer reality of the narrative, particularly given Ichikawa’s penchant for abrupt cutting that eliminates transitory pillow shots. The streets of Endo are clearly sets that are splintered by theatrical lighting, with through lines that draw the eye across the widescreen frame and visually rhyme the city with the set of the theater. When Yukinojo—who’s had secret training in martial arts—defends himself against killers in the woods, the trees are represented by an explosion of expressionistically earthy hues. Landscapes are engulfed in fog and darkness that are punctuated with blasts of hallucinatory color. Sword fights are reduced to their minimalist essence as slashes of silver across Ichikawa’s pitiless canvas. Spaces within frames are segmented, suggesting in-camera split screens that mirror the warring psyches raging within the characters and a Japanese culture that’s riven with corruption and inequality.

An Actor’s Revenge is ultimately set in Yukinojo’s mind, dramatizing the internal processes of accommodation and manipulation that are among a successful artist’s stock and trade. Yukinojo is alluring to both women and men, who’re intoxicated with his mysterious impermanency, as he blends distinctions of gender, class, and victimhood and avenger. He could be any of the people he’s courting and stalking. Yukinojo possesses a pop icon’s understanding of audiences, varying his guises so as to feed his patrons’ narcissism back to them. In lockstep with his protagonist, Ichikawa fashions a deliciously fluid aesthetic that’s irreconcilably bleak and sensual. An Actor’s Revenge suggests punk art that’s been disguised in traditionalist’s clothing.

The image on this new transfer is gorgeous, with crystal sharp whites, deep blacks, lush and light blues, and explosive reds, pinks, and yellows. Facial textures have been rendered with piercing clarity, which is important to a film so focused on people in various forms of disguise. (A close-up of a woman’s face as she’s attacked in a heavenly wooded landscape is particularly terrifying and beautiful.) The image is also appropriately soft and grainy, as there’s a fragile, impressionist quality to An Actor’s Revenge that’s could’ve easily been cheapened by a senseless obsession with clarity. The monaural soundtrack is clean and bold, with a strong sense of dimensionality that nimbly balances the jazzy score with the percussive sounds of drums and war.

This package is slim, but it carefully elucidates many elements of An Actor’s Revenge and Kon Ichikawa’s career at large, with a lack of pretension that admirably opens an ambitious and difficult film up to larger audiences. A rare 1999 Directors Guild of Japan interview with Ichikawa, conducted by critic Yuki Mori, allows the filmmaker to quickly run through his entire career. Ichikawa has a poignant chemistry with Mori, and he talks of his willingness to take on any project and make it his own, rather than cherry picking stories that might cumulatively establish him as a specific kind of auteur—a willingness to experiment that Ichikawa maintained until his death. A new interview with critic, filmmaker, and festival programmer Tony Rayns highlights the various art forms that influenced An Actor’s Revenge, while elaborating on the history of Japanese cinema and how the film came into being. In the booklet accompanying the disc, there’s a terrific essay by critic Michael Sragow that captures the film’s visceral audacity, while offering additional context pertaining to Japanese society. Also included in the booklet is a short piece by Ichikawa himself, in which he recalls how he came to endorse Daieiscope, a Japanese equivalent of Cinemascope.