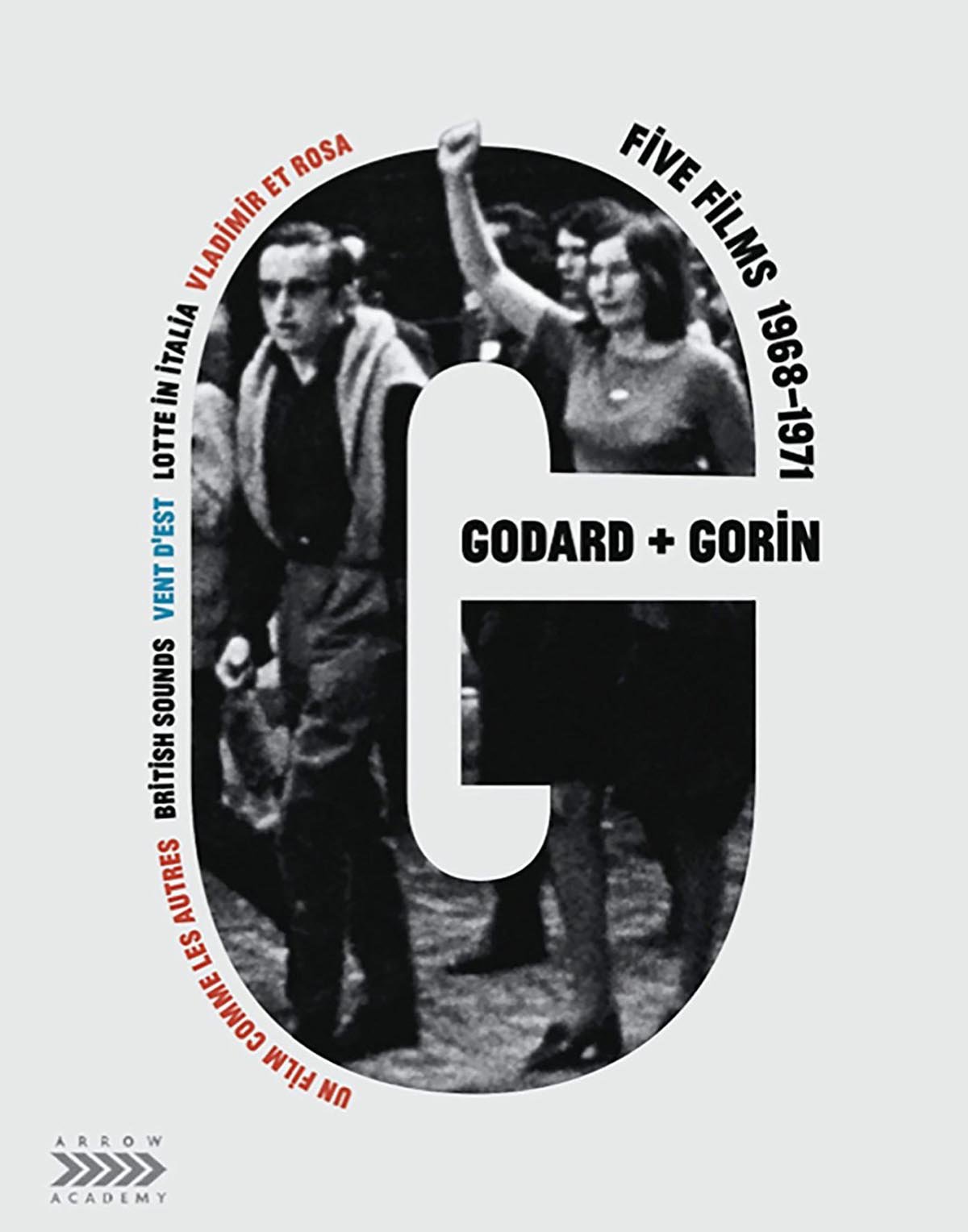 Jean-Luc Godard’s early films reflect the increasingly political nature of their maker and the volatile cultural upheavals of the 1960s. By the time Godard used 1967’s Weekend as a kiss-off to commercial cinema, he had already covered topics like the Algerian and Vietnam wars, America’s post-World War II presence and influence throughout Europe, and the increasing commodification of all facets of life under capitalism. Yet the anti-Gaullist riots of May 1968 galvanized an already radical filmmaker to approach his profession, itself a product of American capitalist industry, from a socialist angle. Teaming up with Maoist student Jean-Pierre Gorin, Godard formed the collective Dziga Vertov Group, so named for the Russian constructivist theorist and director, and set about creating a series of films that break apart the formal rules of cinema for the purposes of remaking existing film language and subject matter around socialist ideals.

Arrow Academy has bundled five of these films—Un Film Comme les Autres, British Sounds, Le Vent d’Est, Vladimir et Rosa, and Lotte in Italia—and together they represent some of the most difficult work of Godard’s notoriously thorny career. Where the director’s classic work mixed formal experimentation with genre deconstructions and impish satire, these films opt for socialist-realist asceticism and foregrounded political theory. If Godard previously weaved his increasingly radical politics into nominally mainstream films, these were works meant to educate, aimed squarely at university students dealing with the fallout from May ‘68 and the Vietnam War.

Godard’s interest in the intersections and contrapuntal potential of image and sound are stretched to the breaking point throughout these films. Un Film Comme les Autres is effectively a short film played twice, each time with a different audio track that foregrounds the way that sound influences how we perceive image in a complicating of the Kuleshov effect. Le Vent d’Est uses images that ape Sergio Leone-esque vistas and tense standoffs as a contrast for a narration track that excoriates Hollywood for its exploitation and obfuscations of history and present social conditions. The film questions the history of supposedly revolutionary cinema, going so far as to castigate the likes of Sergei Eisenstein as hopelessly indebted to Hollywood sentimentalists like D.W. Griffith. Godard and Gorin frequently employ multiple narrators whose words overlap into muddled audio, and even when the voices are separated they often act in opposition, each speaker challenging the other to defend their views or chiding them for insufficiently heated criticism.

In spite of the challenging nature of the films in this set, however, they nonetheless betray a fundamental playfulness that has run through all of Godard’s work. British Sounds, for example, makes a joke out of its critique of industry in its opening sequence, an extended tracking shot through an auto factory’s assembly line that parodies the traffic-jam scene in Weekend. The reference subliminally suggests a kind of predestination for the vehicles that move arduously through their creation on their way to eventual jams on highways. All the while, the sounds of construction, a deafening shriek of metal shaping other metal, are so distracting that the complex, polemical narration ironically becomes the only lucid anchor of the scene.

In fact, Vladimir et Rosa, an attack on the farcical trial of the Chicago Eight, is one of Godard’s funniest films. It’s a faux-Orwellian riff that introduces the Vietnam protesters being beaten in stagey fashion by cops swinging pool cues, then moves to a trial presided over by a tyrannical judge, Himmler (Ernest Menzer), whose red-and-black robe resembles an abstract rendering of the Nazi flag and who ominously presents a cluster of scowling, old, white people as a reasonable jury of peers. The trial itself is a chaotic farce in which the judge calls on the defendants simply so he can silence them, banging his gavel so incessantly that eventually just never stops pounding the podium, providing a metronomic rhythm to the judicial railroading.

For all the dogmatic pronouncements that dot the films, Godard and Gorin also incorporate Marxist notions of self-criticism to undermine and frequently amend their seeming absolutism. Lotte in Italia devotes its entire second half to criticizing the first half for collapsing into an incomprehensible morass of theorizing. Godard and Gorin even foreground the unavoidable capital pressures at work on these films, as in the start of Vladimir et Rosa in which the narrator admits that this film is being made in order to raise funding for another about Palestine. “It’s a complicated story,” says the narrator early in the film, “but, as radicals, it’s our job to simplify it as a service to others.”

That line may seem amusing in light of the dizzying onslaught of images, sounds, and theory that defines the films within this box set. Yet in this contradiction is the seed for much of Godard’s later career: Translation of any kind changes the original meaning of a statement, and speech or text is a translation of concepts that place limits on ideas by attempting to put them into words. Beneath the polemics and sarcasm of these films is an earnest attempt to find a new cinematic language to transmit ideas without limitations, a desire that’s driven the last half-century of Godard’s career.

Never officially released on home video, the Dziga Vertov Group’s films have only ever been wildly available on degraded bootlegs, their faded and yellowed images supporting the notion that Jean-Luc Godard willfully abandoned the formal boldness of the first phase of his career. Restored to shocking clarity on Arrow’s Blu-ray transfers, however, these five films force a re-evaluation of their aesthetic merits. The immaculately clear images now show off the delicacy of Godard and Jean-Pierre Gorin’s naturalistic lighting and mounted, static shots, revealing a level of care to even the briefest shot that belies the notion that the filmmakers cared only about socialist realism and theory. The frequent and symbolic use of red to connote socialism—or, in the case of the judge from Vladimir et Rosa, fascism—now pop off the screen against the surrounding muted colors. The sound is equally revitalized, as the muddy and every-hissing monoaural soundtracks that accompanied most of these films’ bootlegs have been replaced by crisply balanced audio presentations. Godard and Gorin intentionally make cacophonies out of their soundtracks, but one no longer has to contend with any number of technical issues to make out the nuances of the films’ soundtracks. For all the overlap and conflict built into the audio, the soundtracks now reveal a careful balance and distribution in each mix. Cleaned up, these films no longer seem like an abandonment of Godard’s formal beauty but a reorientation of it.

Godard’s work invites endless analysis and debate, and the box set’s extras dive deep into the included films and the filmmaker’s overall career. A two-hour conversation with Godard, recorded in 2010, finds the filmmaker in fine form, passionately repudiating the auteur theory he helped popularize, holding forth on his social critiques of cinema, as well as spiraling off into bouts of wordplay. Michael Witt, author of the indispensable Histoire(s) du Cinéma, provides a series of brief interviews on the subject of each of the films included as well as two DVG films, Until Victory and Pravda, that aren’t. Witt provides production details about each film, as well as short but probing criticisms that examine the theoretical references and aims of the filmmakers. Witt also contributes a revised 2006 essay on the DVG films in an accompanying booklet, which contains archival interviews with Godard and Gorin, who may obfuscate the intent of their collaborations as much as illuminate them. These in-depth, analytical extras are some of the best to ever supplement a home-video release of Godard’s work, yet the most perversely fascinating feature may be a commercial that Godard shot for Schick aftershave during this period, a hilarious travesty that opens with a blaring radio broadcast about Palestine and concludes with a hammy, aggressively exaggerated delivery of the false cheer of commercial acting.

Rescued from decades of neglect, the Dziga Vertov Group films of Jean-Luc Godard and Jean-Pierre Gorin look so startlingly clear on home video that it’s easier than ever to appreciate them as crucial stepping stones in Godard’s mutable, constantly self-analyzing career.